David Chang’s new Netflix series Breakfast, Lunch & Dinner (BLD) expands on his show Ugly Delicious with four episodes that each pair the Momofuku founder with a different setting and celebrity dining companion. While Ugly Delicious incorporates travel and interviews in broad explorations of iconic foods, BLD focuses on conversations with Chang’s guests inspired by their surroundings. The show is entertaining but inconsistent, and it doesn’t engage with featured communities as thoroughly or thoughtfully as Ugly Delicious does.

The main flaw of BLD isn’t, as some early reviews have claimed, that it’s celebrity-focused (which could describe most television), but that it doesn’t know what it is. It feels like it might want to be something more frivolous and spontaneous. But it assumes an air of importance on the subjects of food and culture, while using an off-the-cuff format that doesn’t allow Chang the range and depth he needs to cover those subjects adequately.

BLD is an experiment with mixed results. The first episode has David Chang and Seth Rogen bro-ing it up, eating, smoking pot, giggling in a hedge maze, and generally basking in Vancouver’s prominent Asian American culture without really delving into it. The episode in Morocco with Chrissy Teigen is more aware of its location and includes some interesting personal conversations, but it still feels like half travel show, half profile, and it’s unclear what role the setting is supposed to play.

The most successful episode is one with Lena Waithe in L.A. Chang and Waithe are both familiar with the area and come prepared to nerd out over their favorite restaurants, one of which turns out to be a bowling alley diner that serves a mix of Asian and American foods. Conversations drift naturally towards shared subjects of interest, and the two discuss everything from sneaker culture to the pressure of representing marginalized groups.

BLD was being compared to Anthony Bourdain’s “Parts Unknown” long before its release. While Chang himself has talked about the inevitability of being influenced by Bourdain with regards to food and travel TV, BLD feels like it’s struggling to be its own thing, and it seems inappropriate to continue the comparison. 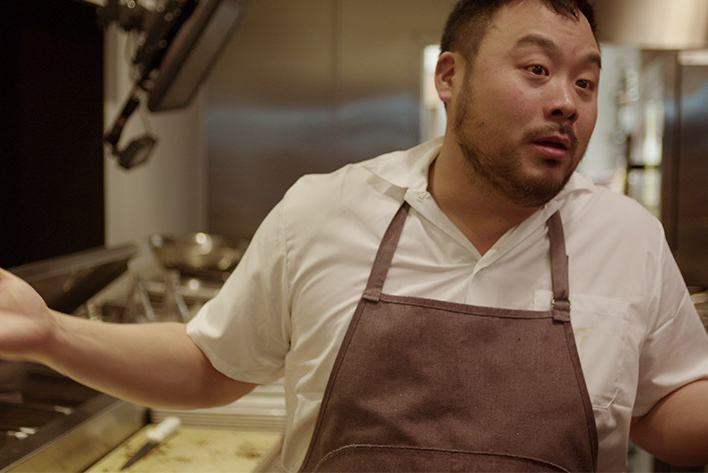 One of Chang’s strengths as a show creator and performer is that he sets up fertile environments for ideas to grow in. The last episode of BLD, where he joins Kate McKinnon in Cambodia, indirectly (and probably unintentionally) suggests that maybe travel for personal enrichment is inherently fetishizing, a theme that could prove interesting if explored honestly. But Chang and McKinnon seem unaware that their eagerness to be moved by Cambodian culture takes them further away from the culture itself.

Of course, that Chang is Korean American doesn’t make him immune to social or cultural missteps. At the same time, as a non-white figure, he may prove more susceptible to criticism for missteps than Bourdain ever was, while simultaneously being unable to escape comparisons with his late comrade-in-arms.

David Chang has already shown his ability to engage seriously with food culture on Ugly Delicious. BLD, imperfect as it is, gives off new energy. Hopefully, that energy will be fully actualized in a later project.

The Many Saints of Newark: A Successful Sopranos Prequel