“The Only Light In the Darkness” – With their world turned upside down, Coulson races to save the life of his one true love as the mystery of “The Cellist,” which began in Marvel’s The Avengers, is finally reveals on Marvel’s Agents of S.H.I.E.L.D.,TUESDAY, April 22 (8:00-9:01 p.m., ET) on the ABC Television Network.

It’s been a long time in the making but we finally get to see the type of woman that catches Coulson’s eyes–Audrey Nathan aka The Cellist. Marvel’s serious about the little things, hence the show’s recent attempts to push the hashtag “#ItsAllConnected.”

Right from the get go the audience is introduced to Blackout, a villain that seems to have the power to suck energy away from technology and people. Right away, we know he’s creepy, mysterious and most importantly, has POWERS. Finally! It only took them about 19 episodes to show a character with superpowers (minus the time Lorelei and Lady Sif showed up).

Ward lies to the entire team while he’s being stitched up by Simmons. He tells them that HYDRA overran the Fridge while he was there, stole everything and freed the prisoners. He then tells them that before he escaped he killed Garrett.

“Yeah, we’re safe here but what about everyone else? People that don’t happen to have access to a top secret underground shelter. What about them? I don’t know if it’s wise, but it’s right.” – Agent Phil Coulson

Coulson gets worried as soon as Ward tells them about the free inmates. He immediately gets Skye to do a threat assessment of the situation. But has her specifically check for a man named Marcus Daniels. Coulson discovers that Daniels is free and immediately decides he’s going after them.

Koenig, on the other hand, isn’t so keen on the agents leaving his secret base until they all go through “orientation,” the ultimate lie detector. Koenig explains that “Nick Fury designed the machine himself because he wanted a lie detector that even Romanov couldn’t beat.” Welp, there goes your cover Ward. I’m honestly expecting him to just jump out of the chair screaming “HAIL HYDRA.” The team undergoes a series of questions to which we find out the following about the agents:

Koenig asks each of the agents if they knew Alexander Piece and about Project Insight (references to Captain America: The Winter Soldier). But most interesting of all, Koenig asks them all about what they’re doing here now that the agency is gone.

Everyone passes and gets their lanyard but it’s finally Ward’s turn. Ward has some shaky answers to which Koening almost catches him but ultimately fails. Ward has some of the most cheesiest answers I’ve ever heard. This scene was easily one of the most cringe worthy scenes of the entire season. Did the writers just establish that Ward is on the same level as Natasha Romanov in terms of espionage/secrecy? Seems like Fury didn’t account for his machine to fail due to human error because Koenig has to be the worse interrogator I’ve ever seen. After receiving his lanyard, Ward walks out of the interrogation room and immediately takes out a nail? needle? out of his thumb–a technique he used to somewhat control his heart beat.

Leaving Ward behind, the team immediately heads out to find Ms. Audrey Nathan, who Coulson explains is the key to finding Marcus Daniels. The agents find Nathan and stops Daniels through the use of Fitz’s robots that shines immense beams of light, but Daniels escapes into the darkness after blowing them away.

Back in the underground base, Skye figures out that Koening is using the lanyards as a way to track Coulson’s team. After calling him out on it, she gets the idea to obtain footage of the HYDRA raid on the Fridge. She convinces Koenig to allow her to hack into the NSA in order to get the footage from the Fridge breakout. Ward takes her side and makes an attempt to get her to access the hard drive. Unfortunately for Ward, Skye informs him that the encryption is location based. They’ll have to take a field trip just to unlock the drive.

Simmons and Triplett are tasked with protecting Nathan while Fitz and Coulson watch from another undisclosed location. Nathan reveals that in the past, Daniels stalked her, calling her his “light.” She goes on to recall the agent of SHIELD that protected her before–Agent Phil Coulson. The two of them were intimately close and were in the middle of planning a trip together when Nathan received the call about Coulson’s death. Acker’s an amazing actor and delivers the exposition between her character and Coulson’s past with the highest believability and emotion.

Back in Providence, May decides to leave on her own. She figures she has no reason to stay anymore since Coulson no longer trusts her. As she looks back towards the base before ultimately leaving, the audience is immediately hit with a sense of ominousity and danger. Ward’s free to roam with no one able to match him. Ward goes to Koenig and slowly closes the door to Koenig’s office. RIP Agent Koenig. You were an interesting addition while you lasted.

Skye goes to Koenig’s office after she finishes hacking into the NSA but she finds it empty. Ward shows up in the most murder-villainous way behind her, but keeps his cover. He tells her that Koenig went to send the video she recovered over to a couple of other government branches, an obvious lie! WHAT DID YOU DO WITH PATTON OSWALT?!

Ward and Skye take a moment to chat and have a drink–that must be nice. He opens up to Skye about his feelings for her and tip toes around his secret. The two end up making out but stop when Skye finds blood on Ward’s body. Again, I say RIP Agent Koenig. Ward excuses himself, claiming the blood must’ve come from one of his open wounds. Now alone, Skye finds Agent Koenig’s tablet which just so happens to show Koenig’s location due to his lanyard. She goes off to look for him.

Meanwhile, the rest of the team use Nathan as bait to draw out Blackout. They set up a trap for him while Nathan sits on stage in a theatre playing her  cello. The team shoot immense beams of light, courtesy of Banner tech, at Blackout before he can reach Nathan, but are blown away by Blackout’s powers. Coulson grabs one of the weapons and shoots Blackout before he can reach Nathan. How convenient that this weapon is a beam of light because this stops Nathan from discovering that Coulson is alive. In the end, Coulson preserves his secret but not before establishing himself as the humble hero we all know and love about him.

Back in Providence (so much for that name), things aren’t so lucky for Skye. She follows the tracker to find Koenig  only to discover that he’s been killed. She immediately comes to the conclusion that the culprit must be Ward. The show instantly turns into a horror film as Skye locks herself in the bathroom and hides. She laments and realizes that Ward has been HYDRA all along. On the brink of breaking down,  Skye pulls herself together and knows her only way to survive is to play along with his charade. Her plan backfires when, while still keeping up the charade, Ward insists that she get on the Bus with him and leave. She tries to make up excuses in order to get away from Ward but is ultimately SCREWED. Ward grabs her by the arm which pretty much tells her that she doesn’t really have a choice. 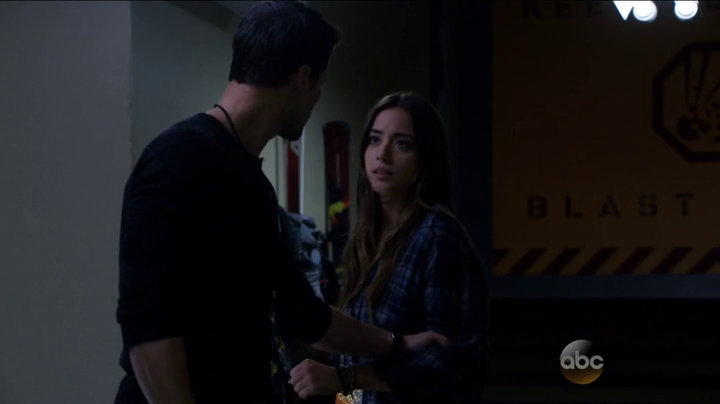 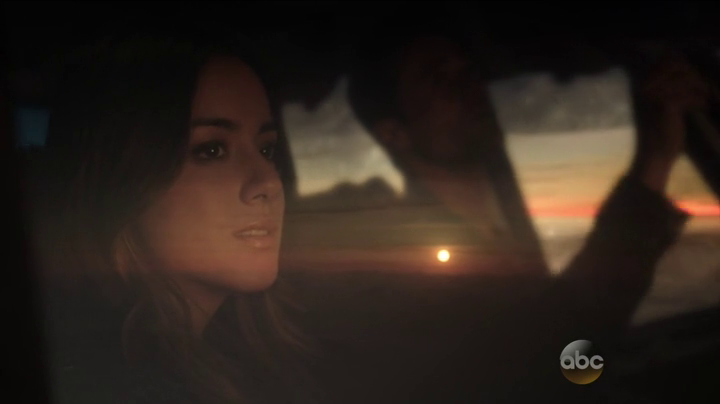 Hopefully in the time it took Ward to find her, Skye left some kind of message for the team, maybe a message in lipstick on the bathroom wall perhaps? On the other hand, Ward is becoming more and more my favorite villain. He’s the bad guy that everyone wants to love AND hate! I mean he’s no Loki but still. He has a menacing look about him and is seriously giving me the chills. It’s especially creepy when he reaches in to hold Skye’s hands as they walk towards the Bus.

“You’re not going to take her out are you?…Good. I’ve always liked Maria.” – May’s Mother

The rest of the team return to find Providence empty, the Bus gone and Koenig missing. The episode then ends with May as she walks alongside the road and is picked up by an older, Asian woman (Tsai Chin!) This must mean she’s May’s mother right? (sarcasm, but probably true). Fun fact: Ming-Na Wen (Melinda May) and Tsai Chin (May’s Supposed Mother) were in The Joy Luck Club together! A film and book that I happen to hold dear!  The woman hands May a file and reveals that the information is on a person named Maria–Maria Hill.

Marvel’s Agents of S.H.I.E.L.D. will return on April 29 with the episode “Nothing Personal.”