Over the past few years, writer Steve Orlando has made a name for himself working on iconic titles such as Wonder Woman, Justice League of America, and Martian Manhunter. Now after 4 years, Orlando is leaving the security of his exclusive contract with DC Comics to work with a number of different publishers both in and out of the comic world.

His work at DC Comics includes launching Midnighter for the publisher’s DC You publishing initiative, which io9 named as one of the “20 Best Comics of 2015” and “The Best Portrayal of a Gay Superhero in Mainstream Comics.”

While it was his childhood dream to join DC, he’s admitted that his goals are continuously evolving. Those goals include seeking opportunities outside of the DC Universe.

“When you’re an adult, you realize that dreams have to evolve and change. So at the time, you know, there was no way that I would stay away from that,” Orlando told The Hollywood Reporter. “It’s still a company that I have, and characters that I continue to have, great affection for.”

His time with the DC Universe not only allowed him access to some of the world’s most recognized heroes but also gave him the platform to develop his voice as a storyteller.

“I think when it comes to Big Two work, the creators that influenced me were people who had this love and affection for the companies’ lore and who also had something to say with these characters,” Orlando said fondly about comic giants DC and Marvel. “There was nostalgia, of course, because these were characters we grew up with, but also this knowledge that you had to serve and grow these concepts beyond that. Nostalgia and the stories that came before were the starting point for the next step of things.”

This writing approach involving nostalgia and growing the canon is attributed to his childhood’s writers of the time, Warren Ellis and Grant Morrison.

“I grew up a Warren Ellis and Grant Morrison guy, and to me, that’s how they always approach things, with a heavy reverence for the past but also the knowledge that these things had to grow and change,” Orlando explained.

The desire to create something new and creatively add to what is out there for readers is something that excites Orlando. 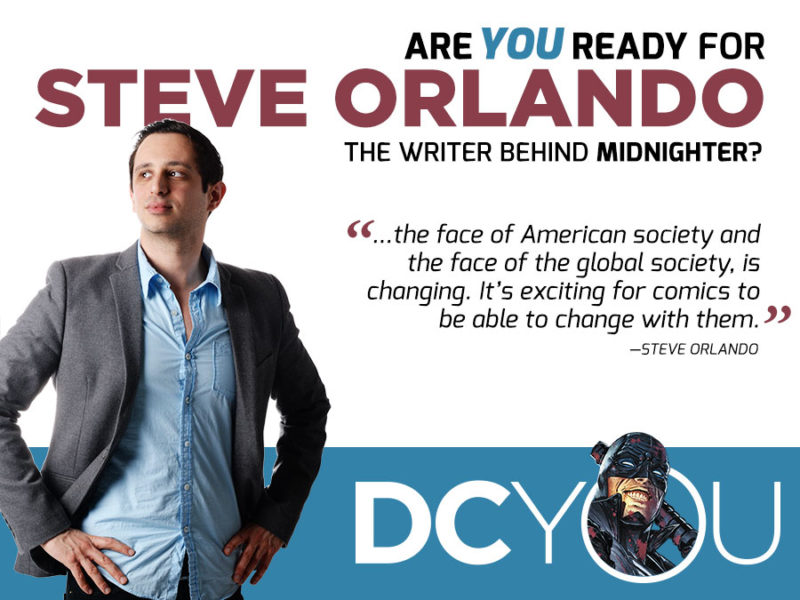 “I have this drive to innovate and to do new things, and that freedom is very exciting, but it’s also something that comes with a price. And that price is that security,” Orlando said. “So on one hand, stepping out and doing all these new things is certainly risky, and it’s certainly intimidating. That’s sort of fire under my ass like I felt like I needed to kick myself in the ass.”

His passion as a storyteller extends beyond just the print world of comics.

For more from Steve Orlando and his interview with The Hollywood Reporter click here. He goes on to talk about the number of new publishers that have emerged over the last few years and the differences they have to offer creators and audiences.

“As I’ve said online, the identity that you should have as a creator is what you mean and what you put out of the world,” Orlando concluded.