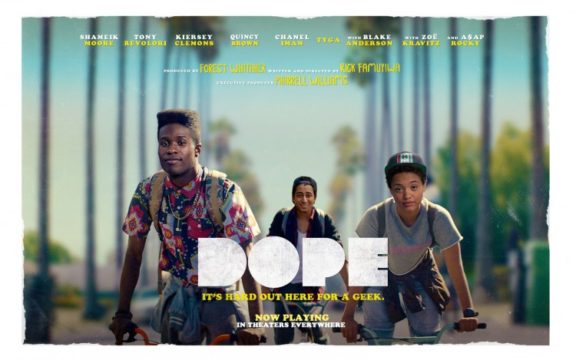 Rick Famuyiwa’s Dope (2015), is a coming-of-age film that premiered at the 2015 Sundance Film Festival.

Did you watch Luke Cage over the past couple of weeks, and feel like you’re in need of something like it? Not with the super heroics, but a feelgood flick with great music that talks of Black Culture in the depths of Los Angeles? Well, you’re in luck because Dope (2015) written and directed by Rick Famuyiwa is just the fix you need.

Allow me to introduce myself. My name is Malcolm Adekanbi. I’m a straight-A student with nearly perfect SAT scores. I play in a punk band with my friends and I’m a 90s hip hop geek.

Malcolm, played by Shameik Moore (The Get Down), allows you into his world of being a teenage outcast in the modern world. However, this movie is not played with the whimsy of a John Hughes film; when there is booze and drugs guns are soon to follow, bringing Malcolm and his friends from a cloistered, safe existence into a dangerous world that they then make into their own image. But the magic of this movie is not in the plot but in a style as unique as its characters. From the nervous Jib (Pre-Spiderman: Homecoming Tony Revolori) to the badass Diggy (Kiersey Clemons, Neighbors 2) to the zany Will Sherwood (Workaholics’ Blake Anderson) this movie brings energy, stakes, and a never will die attitude.

Of course, I must warn you: there is a scene that jarringly starts preaching to you near the very end. It can be very easy for this last scene to leave you annoyed as the movie ends, but should you take the message in stride, Dope becomes a movie much deserving of your time and attention.