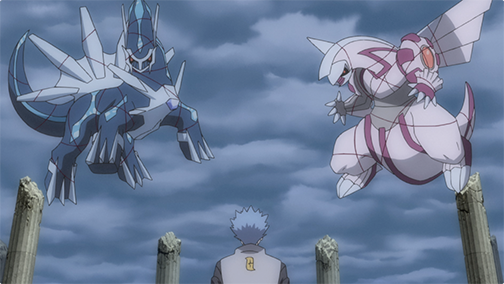 Awww shit… the powers of Concepts, Time and Space, are SO OVERWHELMING.

Surely, the ability to call on the substantial powers of the earth are fearsome.

Clearing the sky for a strong sunlight, forcing earth waves to create lava eruptions…Bringing forth heavy clouds of rain and creating water waves the size of tsunamis…

The third generation was focused on bringing into light how destructive these monsters can be.

The belief that these guardians of time and space could use their abilities in an epic dance to create a new world is understandably farfetched, but truly the only powers capable of such a feat would come from these perception bending forces. At full force, these deities would not flinch if confronted by the powers of the mighty Groudon and Kyogre. They would seemingly evade all aggression. Dialga would easily stop an attack’s flow of time and move out of the way. Imagine Dialga going through a maze of fire pits. Easy enough if its body weren’t so big. But using some time variation it could probably manipulate its own speed and thus contract its length as seen by those time-frozen traps. And your boy Palkia would phase its body through dimensions at a whim, jumping about the fabric of space and getting some ice cream from across the globe while avoiding all that rain from the cranky Kyogre.

Oh Cyrus, your plans were so close to fruition. You had alright moves. Surely, you make for a better leader than Archie. No questions. That guy is a dumbass. You successfully contain the deities with the red chains of destiny. But you didn’t account for Giratina’s love for this world you were about to annihilate.  You may be satisfied by your new lifetime with the Merciful Giratina, but your true fate still lies ahead yet to be truly captured. Would you be happy to know that you and Giratina hold all the spirit within that world? Sure, compared to the deity, you basically have 0 spirit points but the spirit count is certainly not null in that disoriented world.

Perhaps Giovanni will save you from such a half-baked fate. Besides, you possess promise of too much talent to be wasted away here.

You keep doing you.