Ah, the ocean… it’s a paradise for the water ‘mons: simple deep water waves, nothing too chaotic here, just good ol’ splashes. Starts off real calm, just some Wingulls gulling in pretty formation, thinking “Dar, where be the karps?”

Underwater, perhaps! Thus we see the classic Hoenn water homies; we got us a school of Luvdisc and a  Clamperl chillin’ at the depths and even a  pair of rare Relicanth swimming merrily away. Those Huntail must be getting food for their lil ‘Perl.

Hmmm, but a Carvanha appears… that’s slightly erie? Nah, I’m just paranoid. That shit be common in the seas.

Pan into the cave… and boom, comes in Arrogant Ass Archie, just stomping the underwater cave like there’s no tomorrow. But there she is, the magnificent treasure of the seas, its god of mystical power, the beautiful Kyogre lazing and glimmering in a pool of its own making. 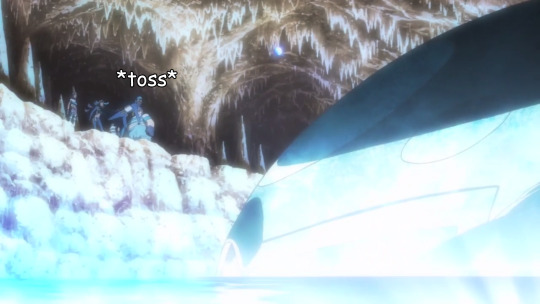 And here, it has to listen to the ironic spiel about how nature is being ruined, come out of this asshole Archie. This guy is the epitome of an Alpha Aqua fuck head, rightfully so I guess.

Ooooooo, in comes a panting Shelly! Must have some important news~(Wow, is it just me or are these Team Aqua lady pirates sexy as hell? Shelly got it goin’ on! Even that grunt be making me wet. Like wow, a pirate’s life is gotta be the life for me.) But what is it that she’s got to say?

“Don’t you see that the world you want to create and the world Kyogre will make are two completely different places?!” – says the siren of truth.

“What are you trying to say?” – says Archie, the friggin’ oaf.

She’s done some prime research at the weather institute and she’s warning Archie to be very careful to not act the fool.

“How very interesting,” continues the fool.

“The only thing that’s waiting for us is nothing but inescapable despair! If you go ahead with this plan, then Primal Kyogre will sink every living thing into the ocean!”

“Hah, as long as I have this Blue orb, Kyogre will do my bidding!”

Yeah, so why the hell did you throw it at the damned behemoth? You’re supposed to catch it… God damn, you are such a fool. I would never be a pirate under this dumb ass Captain even if it meant working side by side with Shelly. Okay, maybe I would do it for Shelly. But only for a week.

Oh shit, and then he tells Kyogre, after it does a super bad ass transformation in a break the bonds that bind you kinda way (that glare though), to destroy everything? Uh… yeah, that’s a terrible fuckin’ command. It’s a fucking primal beast; it’s gonna take your ‘command’ very literally. Use some conditions next time you try to ‘change’ this so called corrupt world. Arceus, this guy is almost as bad as Trump.

Gotta admit though, the way Kyogre leaps out into the surface and makes those Wingulls shit themselves is super satisfying. In an instant, Kyogre cries, GET THAT SUN OUTTA MY FACE.

And then there was rain. A lot of fuckin’ rain. Like too much rain. Like biblical amounts of rain, like mesopotamia amounts of rain. And typhoons and hurricanes up the Earth’s pissing hole. And thunderstorms. Friggin 100% accurate Lightning storms shooting down at your face, Archie. And Tsunami style waves under a pissed off floating Kyogre… kinda flying like a boss though. These be my seas, bitches.

Poor Karp, not even with your swift swim up, under the rain, are you gonna go against this primal current; ya done son. Watch out Horsea, that fat ass Spheal is gonna hit you in the face.

Hurry, someone build an ark and get two Shroomish and two Taillows and all the other cool ‘mons, cause shit’s going down.

My god, every Wingull that you have ever ran from or fainted is basically on screen trying to get the fuck outta Kyogre’s way but all in vain, ‘cause of dumb ass Archie.

Yeah, why are you surprised when your boy Matt is telling you that you’re done. Why didn’t you listen to sweet sweet Shelly? You have her as an Admin for a reason, right?

Kyogre listening to your command? More like, IMA USE THE MOST POWERFUL SURF AND WRECK YOUR FACE.

And that’s how life is. Fools die. Innocents die… but with any luck the fools die first before they cause the world any harm. Then again, I’m sure nature will be fine without dumb ass humans like Archie. The world and it’s oceans are chaotic enough without humans contributing… Our meddling just speeds up the process.

Don’t be too freaked out by this ending though… maybe it’s just another one of Courtney’s visions like the one from episode 7.