From a viewer’s perspective, the first season of Watchmen is riveting. From a critical and social perspective, it’s frustrating. Viet Thanh Nguyen, author of The Sympathizer, detailed in a Washington Post article how the series avoids linking anti-black racism and American imperialism while giving its Vietnamese trillionaire character Lady Trieu (Hong Chau) surprisingly little backstory. In Shadow and Act, Danielle Butler explored how the show downplays modern-day anti-black police violence, and how protagonist Angela Abar a.k.a. Sister Night (Regina King) is relatively unengaged on the subject of race despite being a Black masked vigilante and secret detective for a force targeted by white supremacists.

I agree that the show drops the ball on the subjects of U.S. racism and imperialism, subjects it voluntarily charged into headfirst. I also feel suspicious concerning the political issues being avoided around Lady Trieu and Angela. At the same time, I think both are refreshing and intriguing characters, and in part because of the very ambiguity that exists around their motivations and histories.

In exploring why that is, let’s first establish that neither character is an open book. Lady Trieu may be underwritten, but she’s also a self-assured tycoon with Big Plans who isn’t about to blab those plans all over town and get emotionally invested in the process. Likewise, the show delights in reminding us that Angela is unpredictable, a prime example being when more than halfway through the season she busts open her mild-mannered husband’s (Yahya Abdul-Mateen II) head with a hammer, revealing him to be, previously unbeknownst to him, a humanized version of the superpowered Doctor Manhattan. If Angela is able to keep her spouse’s true identity from him, what’s she hiding from the rest of us? 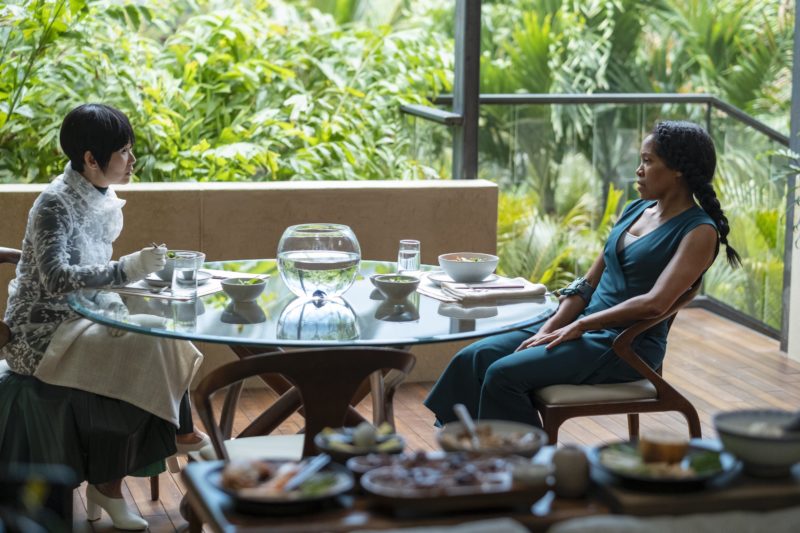 Lady Trieu steps more definitively into a villain role when it turns out she intends to kill Doctor Manhattan and harness his powers. Angela, subsequently faced with losing the man she loves, certainly garners more sympathy than Trieu. But when Angela suspects Dr. M. may have left her his godlike powers in the unassuming vessel of a raw egg, she doesn’t hesitate to crack it open, gulp it down, and test her abilities.

This last scene has been criticized for a variety of reasons, some of which come down to the idea that, ultimately, no one should have such abilities. But I didn’t feel this part of the show instilled confidence in Angela so much as reinforced that we still have no idea what she’s going to do next. Angela is a cop and a vigilante. Lady Trieu is/was a sickeningly rich individual. King and Chau play these characters in a way that makes us want to like them but never allows us to fully understand them, which is part of what makes them fascinating and unlike many other fictional female characters, not to mention fictional women of color.

In real life, women are expected to facilitate communication and dispel discomfort. In Watchmen, however, Trieu’s and Angela’s relative isolation and proximity to power allow them to ignore these social norms. That they keep others at arm’s length isn’t only a result of them not being fully fleshed out, but also of them having the capacity and desire to do so.

This isn’t to say that Angela is a villain, or that Lady Trieu is a good person. It’s also not to say you have to like either of them or that they wouldn’t benefit from further development. But Lindelof’s Watchmen, like the comic that inspired it, occupies a morally ambiguous universe, and the women of that universe are worth watching. Closely.