Finally, months after its initial release in Japan, the Makoto Shinkai movie Your Name (Kimi no Na wa in the original Japanese) has finally become available to American audiences. Why the excitement? This is not just another anime import, this movie is the top grossing movie in Japan, which makes watching this movie the equivalent of experiencing another country’s Avatar. It is also well worth saying that Your Name (Kimi no Na wa) is a worthy addition to Shinkai’s filmography. 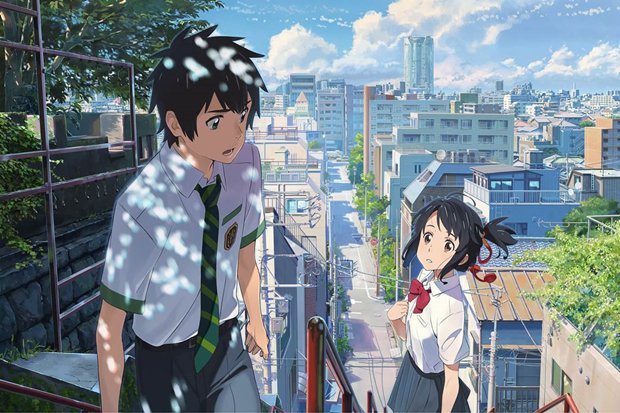 Your Name is a 2016 Japanese anime film written and directed by Makoto Shinkai. (君の名は。 Kimi no Na wa.)

Your Name (Kimi no Na wa) has perhaps Shinkai’s least subtle story. I don’t mean any negative connotations with that statement; after watching Five Centimeters Per Second and The Garden of Words, to watch a movie that wasn’t soft, quiet, subtle, and atmospheric was quite the shift. The movie follows two Japanese teenagers living completely opposite lives. Mitsuha (Mone Kamishiraishi) is living in a small, rural town who feels trapped living with her grandmother and caring for the town’s shrine. Taki (Ryûnosuke Kamiki) lives a modern city life juggling school, work, and worrying about normal teenage things like chores and crushes. Their lives would change and intersect when they find themselves switching bodies and living as the other for days at a time. As they get to know each other, they must overcome seemingly impossible obstacles to be able to find each other.

Body swapping movies aren’t particularly new, but the choices that this movie makes with its premise gives the movie a fresh stroke of originality. The only movie that I can think to compare it to is the 2006 Keanu Reeves/Sandra Bullock feature The Lake House. To dissect why the comparison is apt would honestly be giving away too much, but just be aware that the movie is easily blown out of the water by how well Your Name treats its premise and how well it sticks to the logic and rules of its story.

When Shinkai’s movies are mentioned, the visual style is usually the first thing brought up, and for good reason. These films are some of the most gorgeous out there, animated or otherwise. Snowfall, clouds, rain, sun glares, food, and cherry blossoms bring up a melancholy atmosphere that makes little everyday actions of writing on chalkboards and dangling shoes look like something magical. Your Name is no different. While it doesn’t quite boast the same level of atmosphere that The Garden of Words has, this movie is still a visual treat. This is especially evident during the juxtaposed scenes between rural Japan and bustling Tokyo, as both characters marvel at the worlds that the other experiences in their everyday lives. It is through these experiences that the world comes alive in a manner that the others movies don’t quite reach. Instead of becoming one with the atmosphere, the characters themselves are just as blown away by the beauty as the audience is, creating a welcome, communal experience, especially being able to do so on a large screen.

The direction of the movie, from character movements to larger scene transitions, are also well done. Being an animated feature, there was obviously a great deal of care taken to creating and changing the mannerisms of the main characters. There is the obvious body discovering scenes, but the characters would interact differently, eat differently, and would even sit differently depending on who was in the body. Additionally, every scene in the movie serves an overall purpose, there isn’t a scene that can be pointed to and said that it doesn’t belong in moving the story forward. The movie drops you in and hopes that you gather all the information with you as you carry on to the end, but thankfully doesn’t hold your hand in the way certain shows like Naruto tend to do.

In the end, this is a movie that is well worth your time and money to see on the big screen. You will find yourself invested and rooting for the characters and hoping and praying that all will turn out well for them. The movie is only out for a limited time, so please do yourself a favor and treat yourself to cinematic goodness.