The Stranded: Kind of a Train Wreck, But an Enjoyable One

The Stranded, a new teen horror-adventure show that has evoked comparisons to Lost, is the first Netflix original series from Thailand. The project is an international collaboration bearing creative touches from horror director Sophon Sakdaphisit, Beautiful Boxer director Ekachai Uekrongtham, and screenwriter and One Life to Live actor Christian Durso, among others. As the first series of its kind, The Stranded shouldn’t be expected to shoulder the full pressure of representing Thai television, but it’s notable for throwing an international spotlight on the region, and despite some obvious flaws, it may be worth checking out if you like emotionally intense dramas.

The Stranded centers around a group of teens who are cut off from their families when a freak tsunami strikes the island where their elite school is located during an end-of-the-year party. It’s unclear whether the disaster has affected the mainland, too, but no one comes to rescue them and there’s nary a cell signal to be found. They settle their hopes on repairing a wrecked boat to get them off the island, outfitting it with a sail sewn from sacrificed designer clothes. In the meantime, some kids lie low, some get into petty disagreements, and some try to unravel the mystery of the strange events that have trapped them.

Kraam (Papangkorn Lerkchaleampote), a boy raised by an adoptive fisherman father who experiences disturbing dreams, is positioned as the main character, but the show gives equal attention to the ensemble cast surrounding him. Kraam has feelings for May (Chayanit Chansangavej), but she’s busy negotiating an unenthusiastic relationship with Anan (Chutavuth Pattarakampol), an insecure rich kid who appoints himself as leader of the marooned group. Ying (Ticha Wongthipkanont), who initially spends a lot of time making out with her moody boyfriend, Ice (Kittisak Patomburana), gradually gets closer to the school outcast, Arisa (Chaleeda Gilbert), as the two pick apart a recording that they believe holds some kind of code. Over time, characters become more definitively sympathetic or unlikable, but it’s not immediately obvious who will be which, and things get even more complicated when one of the school’s teachers, Professor Lin (Sinjai Plengpanich), wanders out of the forest to join the group… or seems to.

The Stranded is a complete mess of plot elements at times, but the worst of the messiness occurs in the first and last episodes—in both, it feels like the show is struggling to establish story too quickly, and the pace is disorienting. In between, though, there’s time for vivid flashbacks, slow dialogue scenes, and supernatural intrigue of a Lost-like variety.

There’s also a sensitive handling of sex and romance in the show, including depictions of consent and control in relationships, as well as a somewhat generous portrayal of queer attractions, which are about as frequent as instances of heterosexuality. There is a tragic vibe attached to one same-sex love story, though this doesn’t adhere too neatly to the stereotypical ways in which queer characters tend to be sidelined in TV shows. 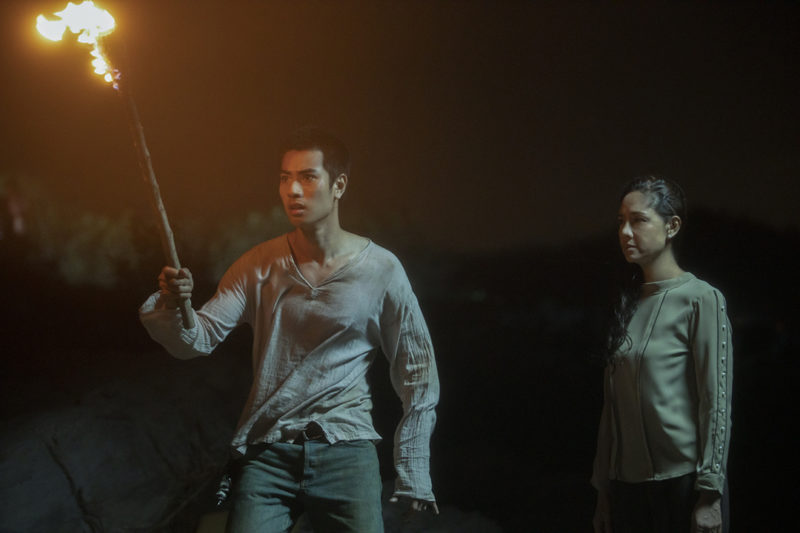 Those primarily looking for an adventure may be bored with The Stranded, which often seems more interested in relationships and aesthetics than action. Its soundtrack is packed with jarring electronics, and when it does get intense, it gets very intense, but its tone is often strangely calm. While there are expected power struggles, the show doesn’t really shove the breakdown of social order in your face. This allows for emotionally rich storytelling that makes quite a bit of it a pleasure to watch. Even if The Stranded does get pretty silly and bombastic at times, it may just leave you longing for Season 2.