DC FanDome – A Global Experience for All Fans

Warner Bros is getting in on the virtual convention action with DC FanDome, a “free virtual fan experience where no badge is required.”

The event begins on August 22, 2020, at 10 AM PDT. DC FanDome will be 24 hours of talent, announcements, and content reveals featuring stars, filmmakers, and creators of films, tv series, games, and comics.

Publisher and Chief Creative Officer for DC, Jim Lee, wants this event to capture the energy of a convention to create an epic online experience for fans around the world.

“This isn’t one big Zoom call…we’re building an expansive, immersive universe where you can explore, create, learn, and hear from the biggest DC stars and creators,” said Lee. “This is the DC Multiverse like you have never seen it before.”

Warner Bros.’ Chair and Chief Executive Officer, Ann Sarnoff, describes this digital event as a massive and immersive way to give all fans new ways to “personalize their journey through the DC Universe” without the constraints of a traditional in-person convention.

“There is no fan like a DC fan. For more than 85 years, the world has turned to DC’s inspiring heroes and stories to lift us up and entertain us,” Sarnoff said. “With DC FanDome, we’re able to give fans from around the world an exciting and unparalleled way to connect with all their favorite DC characters, as well as the incredible talent who bring them to life on the page and screen.” 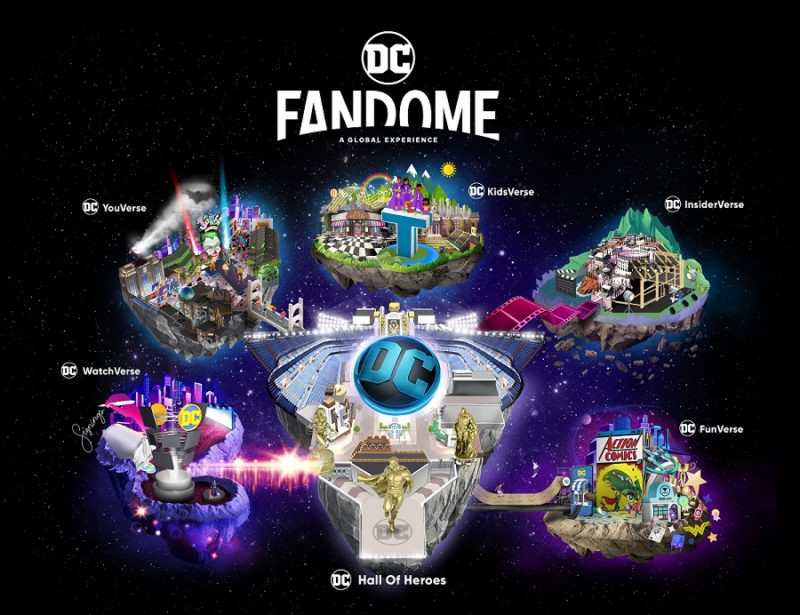 At the center of the DC FanDome is the Hall of Heroes with programming, panels, and content for DC’s various media properties, which will all be available in multiple languages (Brazilian Portuguese, Chinese, English, French, German, Italian, Japanese, Korean, and Spanish).

Beyond the Hall of Heroes are five worlds with specialized content:

DC WatchVerse: This will be where fans sit back and view hours of content from panels to exclusive screenings to never-before-seen footage from DC Films, TV, Home Entertainment, and Games. Hopefully, there’s some new sneak peeks of the Snyder Cut and Wonder Woman 1984.

DC YouVerse: Clever name that reminds me of the DC You initiative from 2015 which emphasized story over continuity and allowed for a diverse range of genres with a focus on diversity through titles like Midnighter, Omega Men, and Black Canary. Not only that, but DC You Unscripted is also the name of the competition DC recently had for fans to pitch original concepts for unscripted shows inspired by the world of DC.

In line with all that past historical use, this world is to view user-generated content from cosplay to fan art. This is the equivalent of walking the floor to see other attendees in cosplay as well as the talent in artists’ alley. Submit your content here: create.DCFanDome.com

DC KidsVerse: This is the family-friendly section with activations for younger fans. Accessible directly at DCKidsFanDome.com.

DC InsiderVerse: DC’s masters of comics, film, and TV (DC Comics’ Jim Lee, President of DC-Based Film Production Walter Hamada, and creator of the DC TV Arrowverse/Executive Producer Greg Berlanti) will be featured in a video that welcomes fans with a 101 introduction to the DC Multiverse. Following that, fans go behind the scenes to see DC come to life in all forms from comics to film to television to games to theme parks to consumer products and more.

DC FunVerse: The most shareable part of the DC FanDome experience with a comic book reader, DIY WW84 Golden Armor and Batmobile kits, digital giveaways, and a merch store with limited-edition exclusives.

What are you most looking forward to at the DC FanDome next month? Let us know in the comments below.

Get a Pair of Mega Stones for Mewtwo