As the end of the acclaimed, award-winning fantasy series draws near, dorkaholics has prepared an overview of its impact, source material and the figures vital to its success. The following contains spoilers through season seven.

David Benioff, one of the showrunners of HBO’s “Game of Thrones,” used these words to describe the medieval fantasy drama in 2011. A harmless exaggeration for most shows, Benioff’s comment carried weight since he was describing the potential of beheading the protagonist, Ned Stark (Sean Bean), in a narrative twist.

Many shows have innovated TV in recent years, but there is a certain audacity unique to the HBO drama. No doubt the show’s various signature aspects, especially its violent twists, are why it has become the premium cable network’s biggest hit — an accomplishment that isn’t a hyperbole. In 2014, “Thrones” surpassed “The Sopranos” to become the most watched show in HBO’s history with an average gross of 18.4 million viewers, rising to 30 million just a few years later.

And while ratings can’t distinguish how many viewers watch primarily to see bloody murder — a fate 56.4% of characters met according to a 2018 BioMed Central study — it can highlight the show’s rise after six years. During that time, the show has topped numerous critics’ best lists while earning countless accolades — the most prestigious being 47 Emmys, more than any other scripted primetime program ever. 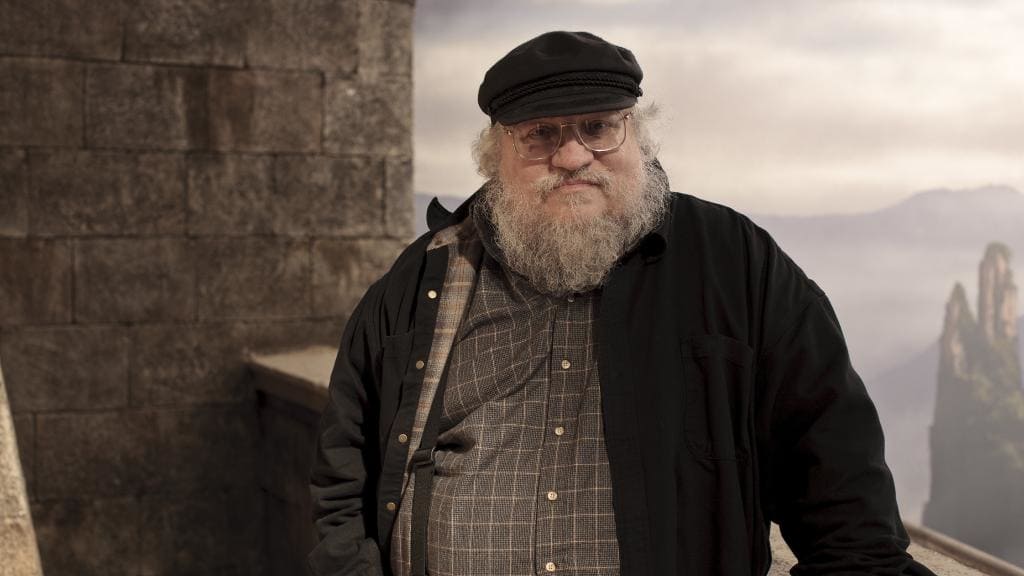 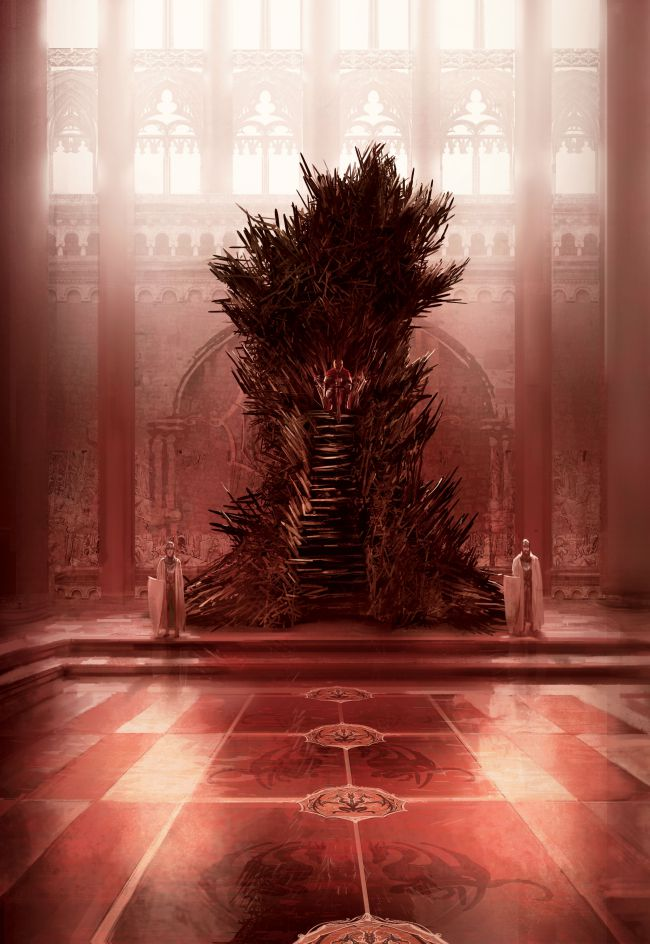 The most accurate version of the Iron Throne, according to Martin. Illustration: Marc Simonetti/Bantham Books

To understand the monumental success of “Thrones,” credit must be attributed to George RR Martin, a writer of genre short stories and novels. Finding TV writing more lucrative, Martin moved to Los Angeles in the 1980s to pursue screenplay work, where he wrote for the second “Twilight Zone” reboot and CBS’s “Beauty and the Beast.” But after dealing with frustration from Hollywood constraints — ultimately a big factor why HBO would win his approval for “Thrones” — the writer returned to prose. While working on a sci-fi novel in 1991, Martin had a vision of something else: a family stumbling upon direwolf pups in snowy weather. That image would develop into the first of five “A Song of Ice and Fire” novels, starting with the publication of “A Game of Thrones” in 1996.

Like many writers, Martin’s creative decisions originate back to influences in his life. His notoriety for bloodlust was heavily fueled by JRR Tolkien’s “The Lord of the Rings” trilogy. Martin recognized Tolkien was an unusual fantasy writer because he broke genre tropes — especially when killing off Gandalf, a prominent character. “The minute you kill Gandalf, the suspense of everything that follows is a thousand times greater, because now anybody could die,” Martin told PBS. “Of course, that’s had a profound effect on my own willingness to kill characters at the drop of a hat.”

One of the show’s most infamous moments, The Red Wedding, is the encapsulation of Martin’s willingness. Featuring the shocking deaths of Catelyn (Michelle Fairley) and Robb Stark (Richard Madden), the traumatic event, like many in the show’s history, subverted expectations by breaking storytelling conventions. These moments boldly refused to satisfy audiences, rare in a medium financially and traditionally intent on doing the opposite. But more importantly, the twists became cultural significant moments viewers worldwide experienced together, disregarding language and physical barriers to join a single conversation. 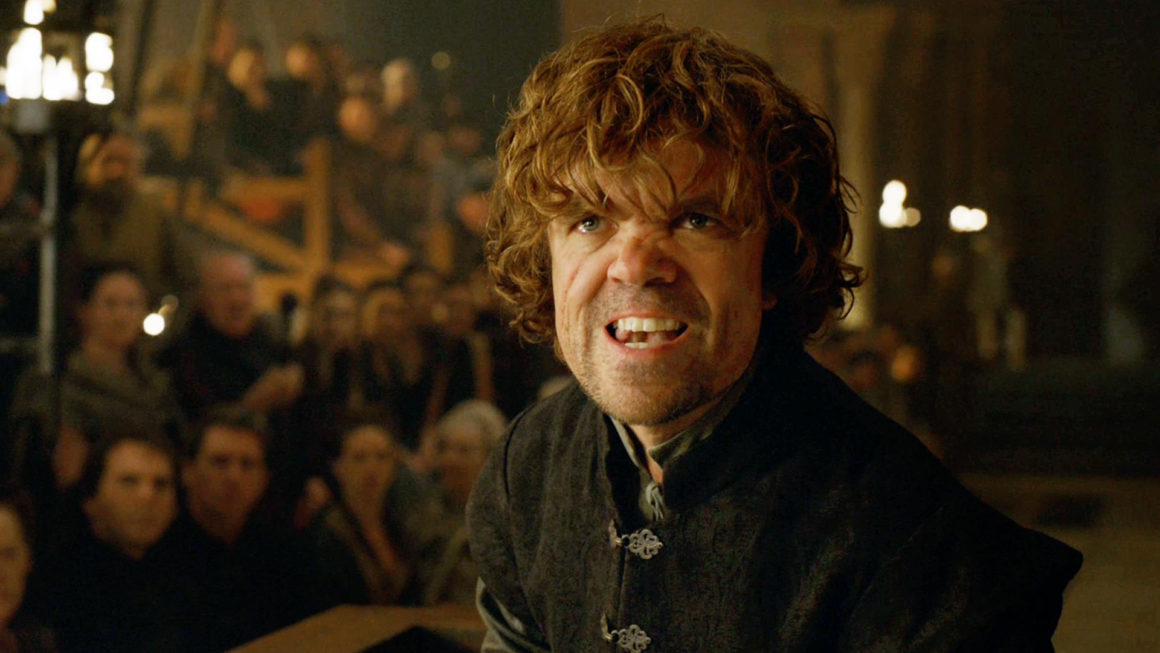 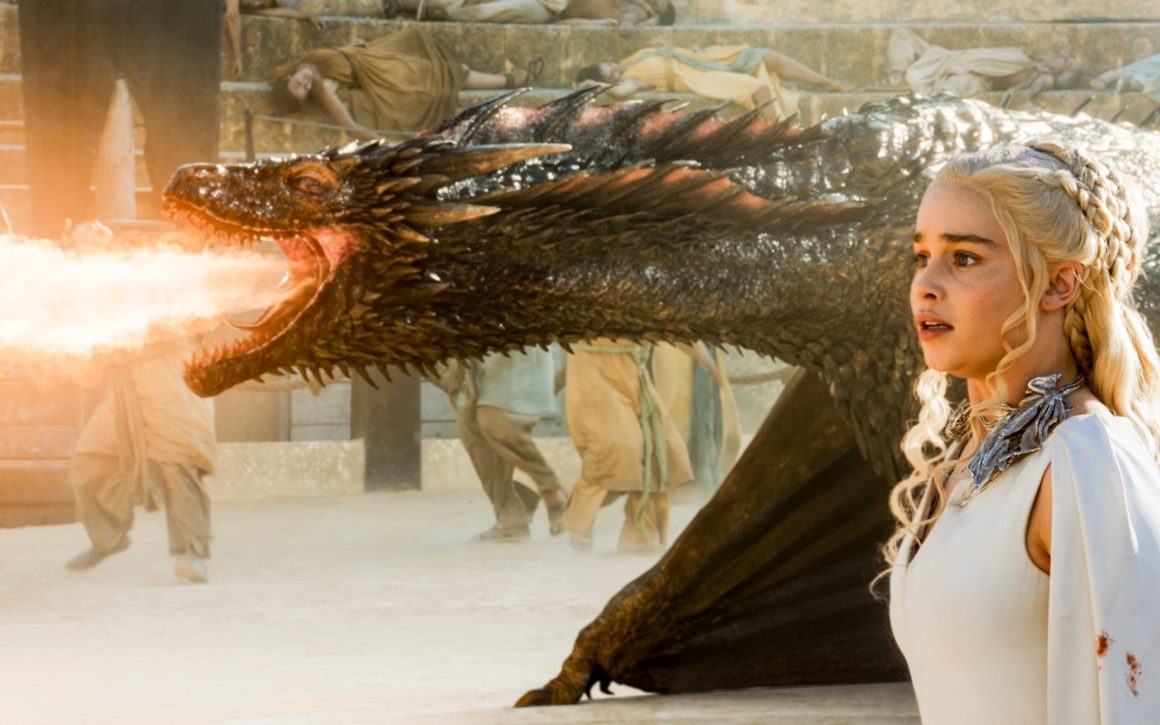 Yet “Thrones” isn’t only known for its brutal violence. Featuring an ensemble cast, the fantasy series has served as a vehicle for representing the marginalized. Peter Dinklage’s captivating performance as Tyrion Lannister — whose problems from sizeism are rarely addressed in entertainment — has raised awareness on the issue while also making himself a mainstream icon for little people (even if he is typically reluctant). Developed women are also depicted in Martin’s world. Daenerys Targaryen (Emilia Clarke) arguably undergoes the steepest arc in the show, and for many, finally represents a prominent female hero in genre TV. She, along with fan favorites like Brienne of Tarth (Gwendoline Christie) and Arya Stark (Maisie Williams), represent a shift in women protagonists who stand toe-to-toe with men rather than just supporting them.

Since airing, the drama has had a vast influence outside of Westeros. In 2012, the term “game of thrones” entered the lexicon as a figure of speech. In 2014, Westeros’ symbol of power, the Iron Throne, flirted with the legitimate kind when the White House tweeted a photoshopped picture of then-President Obama sitting on one. And while this was taking place, a wave of historical-medieval dramas like “Vikings” and “The Last Kingdom” took a stab at the genre. The show has been a hit in the comedy realm too, directly referenced in animated classics like “South Park” and “The Simpsons.” And to top everything off, “Thrones” has affected the piracy world: topping BitTorrent charts for six years, with its seventh season notably accessed illegally over a billion times, more than it was watched legally.

The Battle of the Trident depicted in “The World of Ice and Fire” companion book. Illustration: Justin Sweet/Bantham Books

Despite a hit from a non-paying audience, making money hasn’t been an issue for the fantasy IP. Since its debut in 2011, “Thrones” has spawned video games, comic books, board games and assorted merchandise to rival franchises like “Star Wars” and “Harry Potter.” For Martin, who was in a six-year drought since the last “Ice and Fire” novel, a spark was ignited. Since the first season aired, he has released one novel, four novellas, two companion books and is currently writing the next entry in the series, “The Winds of Winter.” And TV isn’t done with Martin’s world, an upcoming Naomi Watts led prequel is in development at HBO — set thousands of years before Ned Stark’s death and helmed by writer Jane Goldman (“X-Men: First Class”). 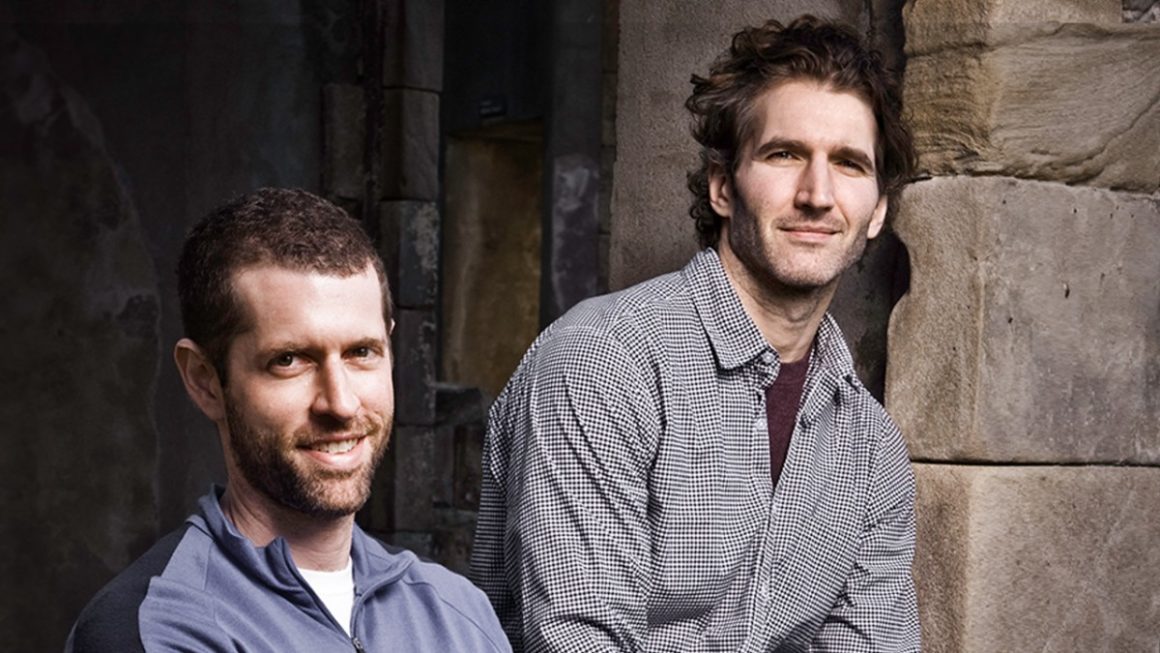 It’s hard to believe the forecast wasn’t always sunny for the series. After convincing Martin to give them the reins, producers Benioff and DB Weiss faced trouble with the 2009 pilot. Vaguely mentioned in interviews, the unaired episode was “hard to follow” and failed to establish critical information like the sibling relationship of Jaime (Nikolaj Coster-Waldau) and Cersei Lannister (Lena Headey). “We got everything wrong on a very basic level with the writing of it,” recalled Benioff to Variety. Fearing that HBO would pull the plug, the two scrapped most of the footage and reshot the episode — some key changes include casting Clarke and Fairley to their respective roles.

Benioff and Weiss adapted five seasons from five novels — all scoring above 90% on review aggregator Rotten Tomatoes — before facing another snag in 2015. In his pursuit of various projects alongside writing “Winter,” Martin had failed to meet its deadline to produce the sixth season. The dilemma forced the creative team to combine their efforts with new, unread material — outlined in a 2014 meeting with Martin — for future seasons. While the approach kept episodes flowing, it meant the show would spoil the novels. “I kind of wish that there were some things we didn’t have to spoil, but we’re kind of stuck between a rock and a hard place,” Benioff told Oxford Union in 2015. [But] “the show must go on.” The veer from the novels also meant season seven was shorter as Martin’s notes thinned out, prompting some criticism toward its length and pace. 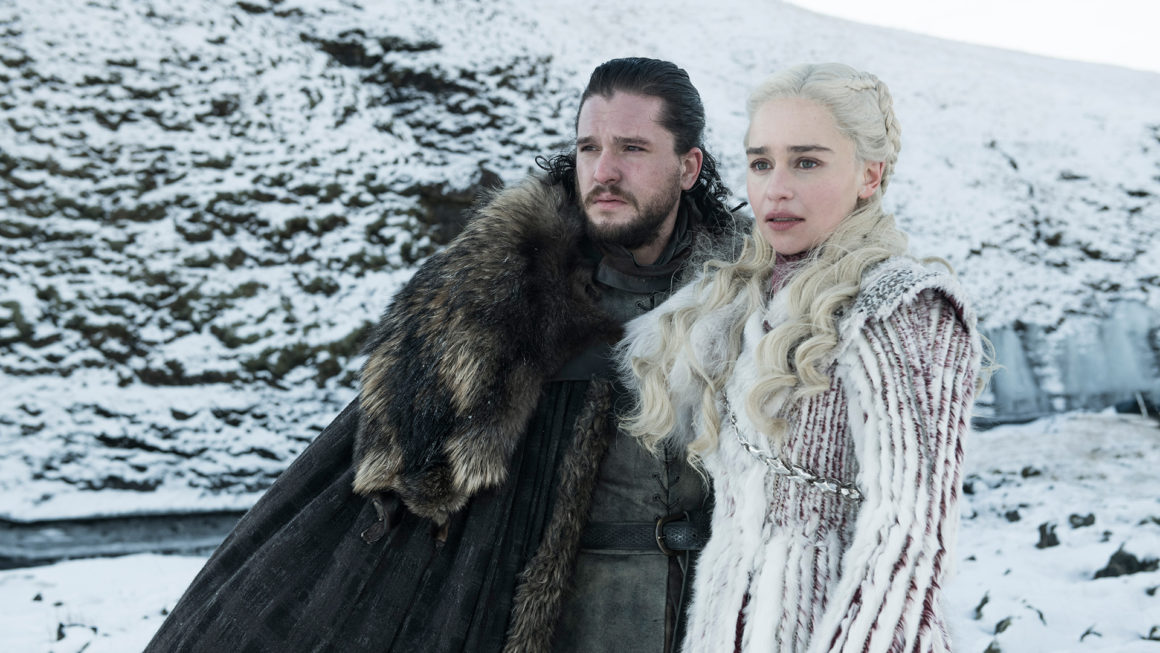 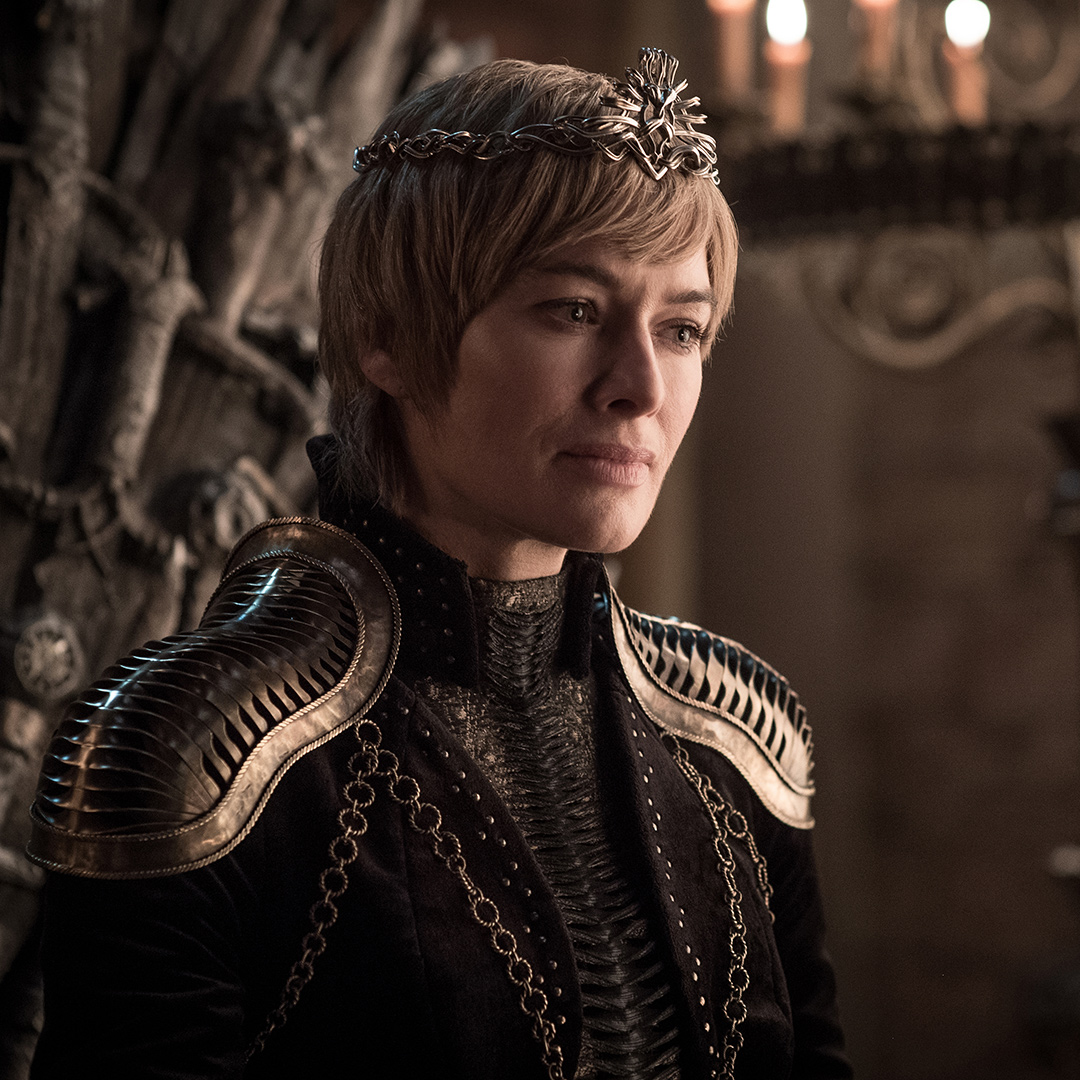 The effect season eight will have on the show’s legacy has yet to be determined. Unsurprisingly, it’s shrouded in mystery; apart from a recent trailer and talks of a blockbuster night battle, little has been revealed about the final six episodes. In a recent Rolling Stone interview, Benioff and Weiss admitted admiration of the “Breaking Bad” and “Sopranos” finales. Over the years, Martin has maintained it would not be a traditional happy ending: “Expect something bittersweet in the end,” he said in a 2015 discussion. “You can’t just fulfill a quest and then pretend life is perfect.”

Whatever ambiguity surrounds the show’s conclusion, its engaged, devoted fanbase worldwide is certain. A numbers juggernaut like “The Walking Dead” might have higher views, but “Thrones” still has the top spot, at least in terms of social buzz, according to stats from info-data company Nielsen. Among their findings: the fantasy series’ seventh season topped the chart for the most discussed program in 2017, averaging 2.56 million social media interactions for each episode, a far cry from “Walking Dead’s” 870,000. Westeros fans might not be the biggest bunch, but they definitely care the most. And with a two-year absence from “Thrones,” “it’s safe to assume they will crown their king again before it ends in May.