Hot Fuzz was released 10 years ago this past week, so what better time is there to recommend the excellent 2007 Edgar Wright film. 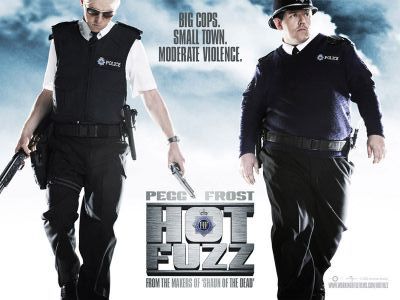 If you happen to not know who Edgar Wright is, I do have to say that you’re in for a treat. Mr. Wright has made a name for himself in the movie world and is a name that’s tossed around in countless articles, analytical YouTube videos, and nearly every single review of Ant-Man (2015) had at least a paragraph talking about how worried the reviewer was that Mr. Wright stepped away from the project. If the man did not live up to his legend, then he would have certainly have reached a backlash against the internet echo chamber by this point.

I could reiterate every point that’s been made across the internet concerning Wright’s comedic skill and direction, but that would be frankly boring and borderline intellectual plagiarism. Instead, I want you to consider how much Wright loves action movies. Like in the recent review of LEGO Batman, it was explained how much fun is made from spoofs that come out of a wholesome place. There is nothing life building in cynically overanalyzing and nitpicking every conceivable detail, but there is when the work rebuilds what it had just torn down. And that’s what Hot Fuzz does; it tears down, but it builds back up. It makes fun of the action film but also goes about making a great one in the process. In other words, it’s a buddy cop movie for buddy cop movie fans by a buddy cop movie fan who hopes that you too can be one too.