Starting Nov. 25, the New Nintendo 3DS will be available in two special-edition models – black and white, both featuring the characters of the Mushroom Kingdom. Courtesy of Nintendo.

If you have don’t own a New 3DS yet or know someone that is need of one, this Black Friday you’re in for something special! This Black Friday, Nintendo will be putting out their stunning piece of hardware for sale at the never before seen low price of $99.99.

For that price, it is only going to cost you $20 more than purchasing a Nintendo 2DS for $79.99, which lacks features such as the glasses-free 3D visuals. But if you want to look on the savings side, you could be purchasing a 3DS device for half the price of larger New Nintendo 3DS XL. 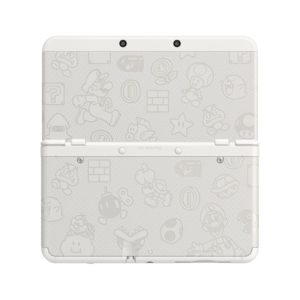 This Black Friday, Nintendo will be putting out their stunning piece of hardware for sale at the never before seen low price of $99.99. Courtesy of Nintendo.

“Nintendo has some of the best gifts for the holiday season,” said Doug Bowser, Nintendo of America’s Senior Vice President of Sales and Marketing . “Whether you’re looking for games for the whole family, or a cool new system at a great value, Nintendo has you covered.”

Starting Nov. 25, the New Nintendo 3DS will be available in two special-edition models – black and white, both featuring the characters of the Mushroom Kingdom. If only it was available a week sooner, to go hand in hand with your copy of Pokémon Sun or Pokémon Moon coming out Nov. 18.

About Nintendo: The worldwide pioneer in the creation of interactive entertainment, Nintendo Co., Ltd., of Kyoto, Japan, manufactures and markets hardware and software for its Wii U™ and Wii™ home consoles, and Nintendo 3DS™ and Nintendo DS™ families of portable systems. Since 1983, when it launched the Nintendo Entertainment System™, Nintendo has sold more than 4.4 billion video games and more than 696 million hardware units globally., including the current-generation Wii U, Nintendo 3DS and Nintendo 3DS XL, as well as the Game Boy™, Game Boy Advance, Nintendo DS, Nintendo DSi™ and Nintendo DSi XL™, Super NES™, Nintendo 64™, Nintendo GameCube™ and Wii systems. It has also created industry icons that have become well-known, household names such as Mario™, Donkey Kong™, Metroid™, Zelda™ and Pokémon™. A wholly owned subsidiary, Nintendo of America Inc., based in Redmond, Wash., serves as headquarters for Nintendo’s operations in the Western Hemisphere. For more information about Nintendo, please visit the company’s website at http://www.nintendo.com.

6 Excellent Gifts For A Gamer