Witchcraft was always meant to be demented and evil. But the desire for easy-to-consume entertainment morphed witch lynchings and demonic rituals into network sitcoms where magic goes cutely awry. Taking advantage of Netflix’s acceptance of the true dark arts, “Chilling Adventures of Sabrina” embraces witchcraft’s roots by implementing whatever unspeakable ideas are lurking in Roberto Aguirre-Sacasa’s mind. Luckily the showrunner’s imagination is the right amount of twisted necessary for the subject matter.

When we meet the titular Sabrina Spellman (Kiernan Shipka), she is loving the mortal life. The half-witch, half-mortal teenager has a boyfriend named Harvey (Ross Lynch) and two best friends, Susie (Lachlan Watson) and Roz (Jaz Sinclair) that surround her with affection as she lives in the town of Greendale. Eventually, Sabrina’s witch background ends up haunting her as she faces an obligation to sign herself over to The Dark Lord (Satan), renouncing her friends in the process.

In large part to its showrunner’s vision and efforts, “Sabrina” has a carefully-crafted gothic world ideal for dark forces to haunt its mortal inhabitants. Creator of the 2014 Archie comic series bearing the same title, Aguirre-Sacasa has a unique grasp of the source material, allowing him to smoothly translate the comic’s pages to the small screen. As the season progresses, he slowly takes the veil off Greendale, revealing a town brimming with intriguing set design, gloomy costumes and strange ideas. With dialogue highlights including exclamations of “Praise Satan!” and a conscious effort to constantly introduce new witchy concepts, the setting of “Sabrina” is a fully-realized character that lures viewers to stay for all 11 episodes. 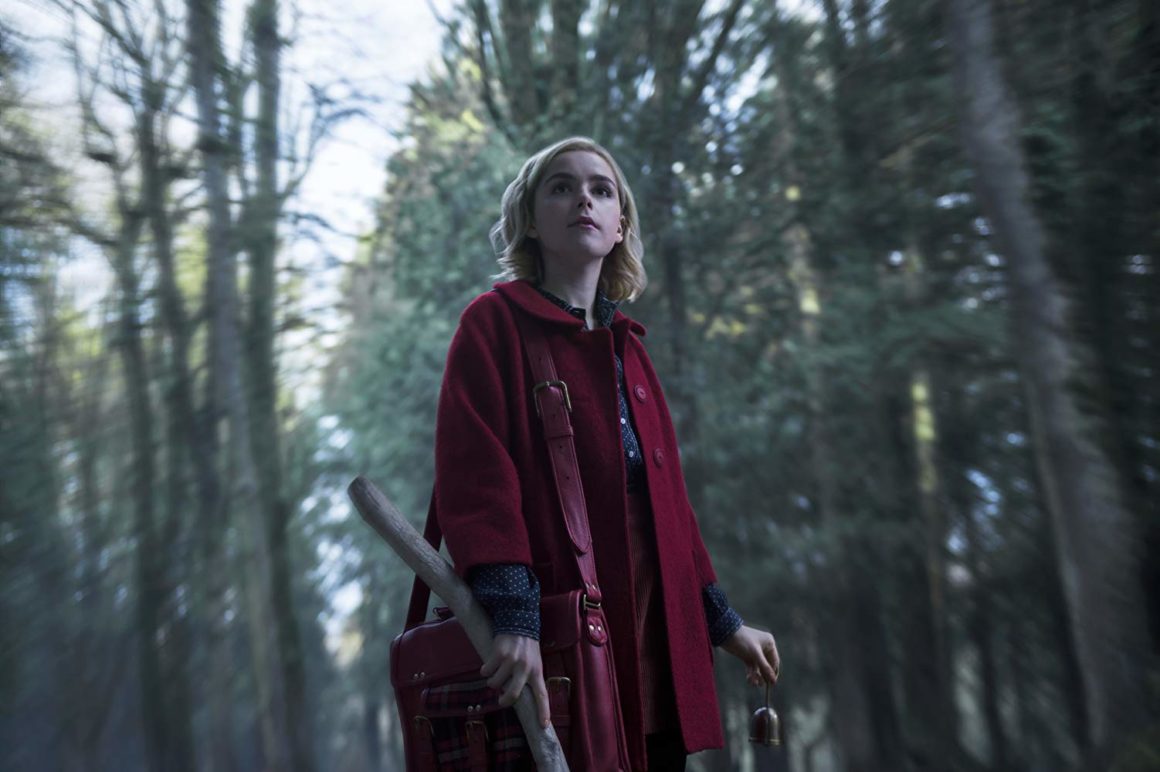 The star of the show, Sabrina, is self-assured and loyal, not just to friends and family but to her strong beliefs, which ultimately advance the plot forward as she continuously clashes against the rules and traditions of authority systems in Greendale. Shipka delivers a compelling, mature performance at a young age, going toe-to-toe with witches, demons and the high school principal with vigor and determination.

But what Shipka carries in confidence and energy, she lacks in humor. Sabrina’s fierce desire to right wrongs produces a tough but deprived character out-charmed by her aunts: stern, devout Dark Lord follower Zelda (Miranda Otto) and motherly, comic relief Hilda (Lucy Davis). While Zelda is the most devoted to the Dark Lord, Otto allows her icy, undaunting exterior to thaw on rare occasions, offering a glimpse of a more humane witch than she would like to admit. Davis, in the other hand, plays Hilda with warm empathy, openly preferencing Sabrina’s well-being before her position in the coven. Living at and running Spellman Mortuary, the sisters are joined by the brilliant Ambrose (Chance Perdomo), Sabrina’s warlock cousin who serves as a voice of reason, despite being the only Spellman serving a house arrest sentence.

When Sabrina isn’t defying her aunts, she is dealing with nefarious witches outside of her home. A popular spot for such activity is the Academy of Unseen Arts, a dark, twisted version of Hogwarts led by the deceitful Father Blackwood (Richard Coyle), High Priest of Sabrina’s coven. Doing Blackwood’s evil bidding from time-to-time is Prudence (Tati Gabrielle), leader of the Weird Sisters (Adeline Rudolph, Abigail Cowen), a trio of witches bent on bullying Sabrina due to her half-mortal ancestry. While Sabrina spends much time dealing with witch hazing and fending off Nicholas’ (Gavin Leatherwood) advances, she doesn’t get enough opportunity to explore the Academy, a shame since her family ties to the school are strong. The young witch doesn’t find solace at her human school either with elusive teacher Ms. Wardwell (Michelle Gomez) roaming the halls. Channeling her sultry character from “Doctor Who,” Gomez beautifully weaves in-and-out of the teenager’s affairs, giving advice with a dash of manipulation to achieve her sinister goals. 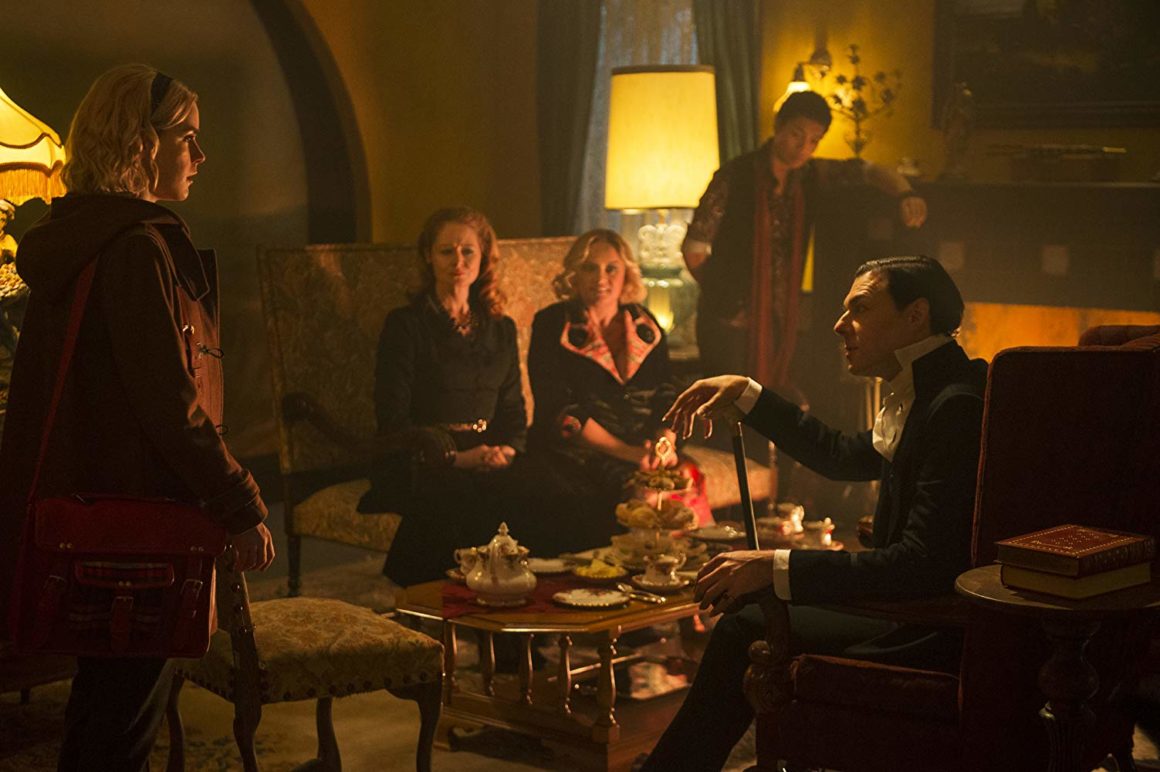 Wardwell’s mischievous scheming is distinguished by being one of few storylines to have a consistent presence throughout Part 1, an unfortunate consequence from splitting the inaugural season in two. Departing from Netflix’s signature style of releasing everything-at-once results in “Sabrina” having an uneven pace as story threads are left hanging. However, Part 1 does conclude with a Christmas bottle-episode that indicates subplots aren’t forgotten, even if it experienced by sitting through a drowsy hour.

Thankfully the preceding ten episodes offer a much more thrilling binge. Sabrina Spellman may not be the most well-rounded titular character but the darkly developed cast and immaculately, detailed world-building more than compensates for it. The creative freedom Netflix allows its creators results in an adaption by Aguirre-Sacasa that remembers its origins, even if it might be off-putting for viewers looking for family-oriented content. But for witchcraft purists, chants of “Praise Satan!” will be exclaimed when “Sabrina” returns in April.

“The Lion King” is a faithful adaptation

Travel Beneath the Earth in ‘Explorer: The Deepest Cave’