Superman and Lois: What We Know So Far

Season 2 of the CW’s Supergirl introduced Tyler Hoechlin as Clark Kent/Superman to fans and the canon of the Arrowverse. Elizabeth Tulloch would join him as Lois Lane as the pair continued to be a part of the Multiverse across Arrow and The Flash through crossovers such as 2018’s Elseworlds and the most recent Crisis on Infinite Earths. Now, these two characters will be leading their own show, Superman and Lois.

The show was originally scheduled for release in January 2021 with filming meant to begin sometime during March of this year. And I’m sure we all know what happened there – the coronavirus pandemic resulted in the shutdown of nonessential businesses such as entertainment. Nothing has been said yet as to if the quarantine has affected the scheduled production and release, so we should follow the Man of Steel’s lead and be full of hope.

After years of facing megalomaniacal supervillains, monsters wreaking havoc on Metropolis, and alien invaders intent on wiping out the human race, the world’s most famous superhero, The Man of Steel aka Clark Kent and comic books’ most famous journalist, Lois Lane, come face to face with one of their greatest challenges ever – dealing with all the stress, pressures and complexities that come with being working parents in today’s society. Complicating the already daunting job of raising two boys, Clark and Lois must also concern themselves with whether or not their sons could inherit their father’s Kryptonian superpowers as they grow older. Returning to Smallville to handle some Kent family business, the pair are reacquainted with Lana Lang, a loan officer who also happens to be Clark’s first love, and her Fire Chief husband Kyle Cushing. The adults aren’t the only ones rediscovering old friendships in Smallville as the Kent sons are reacquainted with Lana and Kyle’s rebellious daughter, Sarah. Of course, there’s never a dull moment in the life of a superhero, especially with Lois’ father, General Samuel Lane, looking for Superman to vanquish a villain or save the day at a moment’s notice. Meanwhile, Superman and Lois’ return to idyllic Smallville is set to be upended when a mysterious stranger enters their lives.

Besides Hoechlin and Tulloch reprising their roles as the titular characters, joining them are… 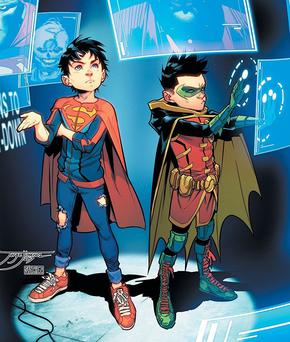 Jonathan Kent as Superboy and Damian Wayne as Robin on the cover of Super Sons #10, by Jorge Jimenez. Photo: DC Comics

Jonathan Kent is a name I recognize as Superman’s adoptive father from Earth, who Superman’s son would be named after in the comics. Jordan is a new one. Giving Clark and Lois two sons is something I haven’t seen before, but I instantly think of the series, Super Sons, which featured Jon Kent with Batman’s son Damian Wayne. Perhaps the showrunners want to capture some of those elements without having to introduce a whole nother Bat-character in a Superman-branded show.

The role of General Sam Lane, Lois Lane’s father, has gone from Glenn Morshower to Dylan Walsh. Morshower appeared in the first season of Supergirl so it’s been almost 5 years since he first appeared in the role. I haven’t seen any negative reactions or backlash in response to this recasting, and I don’t think there’s any reason for there to be as this character is moving from a minor to a major role.

Wolé Parks as The Stranger

I and many other fans believe that The Stranger will be a character based on The Phantom Stranger. Deadline reports Parks’ character is “a mysterious visitor hellbent on proving to the world that it no longer needs Superman.” In the comics, the Phantom Stranger is a character with no definitive origin story. As I read the series Phantom Stranger in DC’s New 52 era (2011-2016), the version I got to know suggested he was Judas Iscariot. Yes, the same Judas that betrayed Jesus Christ. And for that betrayal, he was condemned to roam the Earth, battling the occult and supernatural, while wearing the 30 pieces of silver he received as payment for acting against Christ. 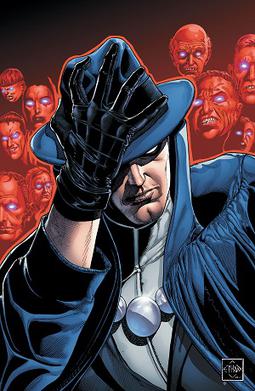 There are two paths that I think the show could go with the Stranger’s character. Clearly, this is not a villain. At his best, he is a man doing his best to repent by fighting for justice. At the very least, he is acting on God’s will. Perhaps God in this show believes that an alien visitor should not be a celebrated icon in the world of mankind, and that is the driving force for the first season – Superman proving that he is worthy of being one of Earth’s heroes.

Other characters and castings include:

What are your thoughts on the addition of Superman and Lois to the CW’s Arrowverse?