The Boys: quite outrageous but a diabolical time to be had

Amazon Prime’s new series: The Boys, based on the same-titled comics created by Garth Ennis and Darick Robertson, was one of my most anticipated shows. Let’s be real, we have had nonstop superhero action since the first Iron Man kicked off the Marvel Cinematic Universe. The big man in a suit of armor and his friends created such a profitable market for the superhero genre and it was about time that Amazon developed a show to get in on the action. The Boys is developed by Eric Kripke (the same guy who developed Supernatural) and stars Karl Urban, Jack Quaid, Antony Starr, and Erin Moriarty. Although this show falls short on some things, it definitely lived up to my expectations and brought a much-needed revitalization to the superhero genre.

[THIS IS A SPOILER-FILLED REVIEW SO TREAD LIGHTLY] 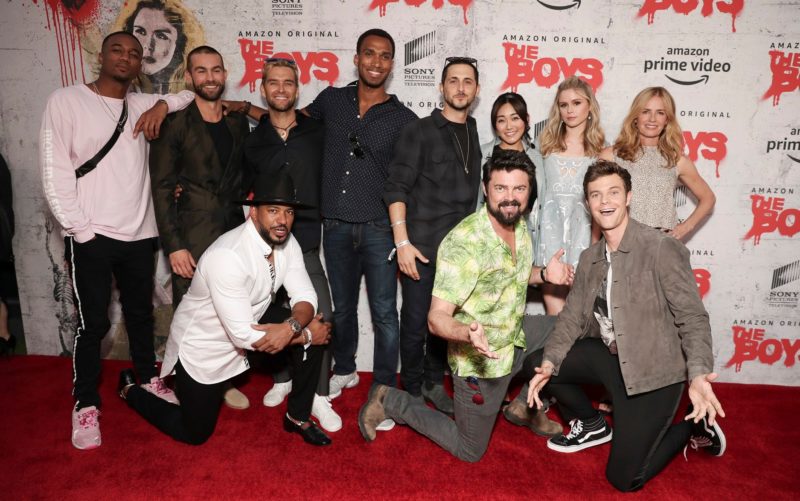 The series kicks things off with a regular guy named Hugh “Hughie” Campbell, played by Jack Quaid, losing his girlfriend tragically and realistically to a superhero named A-Train, who is pretty much based on the Flash and Quicksilver but looks like Anthony Mackie’s Falcon. This event brings Karl Urban’s Billy Butcher (what an awesome name) into the picture to recruit Hughie to “spank” the superheroes who are considered global celebrities and work at a company named Vought.

Let’s first discuss how ridiculously over the top this show is and how I loved every minute of it. The show really highlights the consequences of the superheroes’ actions and mirrors an almost terrifyingly accurate reaction from society towards it: “we wouldn’t give two fucks and still cheer for these assholes.” I mean, have you ever thought about how the Flash doesn’t hit anyone at all with him running at almost the speed of light?! And yes, we can argue that the Speed Force protects him and other living beings around him, but there is definitely no Speed Force here and with great power comes great gore. Not only that but there was a scene where a Supe named PopClaw crushed her landlord’s skull while he was in between her legs eating her out (and yes, it gets pretty fucken graphic). The show really plays with its strengths and follows through with its graphic violence and ridiculous metas of the superhero genre. You definitely can see that Seth Rogen had his hand and thoughts in this show.

The number one thing that I loved about this show was Antony Starr’s Homelander. Two words for his character: Holy Shit.  HIS PERFORMANCE MADE THIS SHOW.  I’d be Team Luthor for sure if Superman was anything like this. Every time Homelander was on screen, I was on the edge of my seat. Antony Starr’s performance was able to turn the switch from a warm and lovable hero to a deranged villain in a matter of seconds. One minute, he is someone you would bring home to meet your parents and then the next minute you got yourself in a Ted Bundy situation. BRAVO ANTONY STARR! I can’t wait to see more.

Throughout the show, we are exploring Vought and the ugly side of superheroes through Erin Moriarty’s Starlight. Starlight’s character reminded me so much of Supergirl from Injustice 2, which is definitely a good thing. No matter how much shit Starlight went through, she remains the ray of hope in the series and has stuck by her principles. She is a strong female role model, so if your underage daughter somehow watched this show without your consent, you can be sure that the one positive thing is seeing Starlight in action.

The Boys, themselves, were fucken hilarious and the shit they did was downright bonkers. Putting a bomb up a superhero’s ass who has indestructible skin?! Who would have figured? Karl Urban’s Billy The Butcher is your stereotypical brooding angry boss who does a fantastic job of leading this team of misfits. Jack Quaid’s Hughie was someone that you can relate to if your loved one happened to be smashed by a superhero who didn’t even apologize for his actions. I’m petty as fuck so I would have undoubtedly joined the Boys on their crusade. I really enjoyed the brotherhood that the Boys shared and how I didn’t feel that it was ingenuine but kind of organic instead.

The con of this show, very small I might add, is that I wanted to see more superhero bullshit! There were only a couple of scenes where you saw Homelander and the Seven being assholes.

I’d give the Boys a 4/5. I haven’t had this much fun about a superhero show since the first season of The Flash and the second season of Daredevil. Eric Kripke and his team did a great job of adapting the source material but changing it up enough to keep us guessing for season 2.

FunimationCon 2020: A Virtual Contention by...

HBO Max: Its Launch and Its...