Andrew Yang is a candidate you should learn about

In this opinion piece, dorkaholics’ writer Brian Tan shares his discovery of presidential candidate Andrew Yang, explains Yang’s platform, and discusses why we should be giving him our attention.

In 2016, I was an avid Bernie Sanders supporter. I believed in progressive ideas such as universal health care, his stance against the millionaires and billionaires of the United States and removing money from political campaigns. Fast forward to 2019 – and Bernie Sanders is once again one of about 15 candidates in the hunt to defeat President Trump.

Andrew Yang is another one of those candidates.

I stumbled across Andrew Yang during his interview on The Joe Rogan Experience and The Young Turks. Yang is an Asian American tech CEO from New York. His campaign is focused on addressing the rise in AI and the looming threat that automation has on millions of American jobs. The way he plans on combating this is by giving every American between the ages of 18 and 64 at least $1,000 a month as a form of Universal Basic Income (UBI).

If you’ve watched any of his interviews, you would find that the way he campaigns is unique and very logically driven. He comes off as someone that knows his stuff and backs up his vision with data and statistics that he has researched firsthand. This is probably one of the most appealing aspects of his campaign for me. He seems like a super down-to-earth kind of guy and doesn’t talk like the other politicians.

Now his vision is very concrete and clear. He provides his end goal and the detailed ways of how to get there. Many of his goals happen to be very progressive. As mentioned before, his main goal is to combat the rise in automation with his plan of Universal Basic Income. To provide this, he emphasizes the need for a “value-added tax” to combat all the tax breaks that are given to these multi-billion dollar tech companies like Google and Amazon. He also supports single-payer healthcare, which is a type of universal healthcare system. He supports the Green New Deal as proposed by Congresswoman Alexandria Ocasio-Cortez. Furthermore, he supports the legalization of cannabis and the decriminalization of opioids. 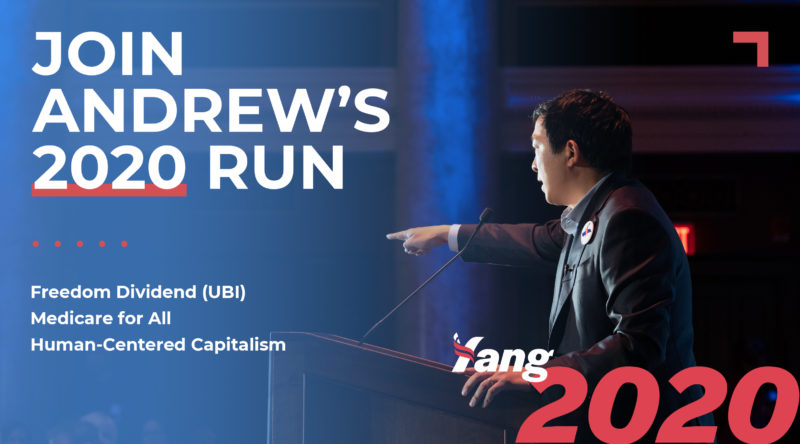 His candidacy is not without some controversy. Just like any other presidential candidate, he is not without his flaws. Of course, one common criticism against Yang revolves around the feasibility of his UBI plan.

I believe that all you have to do is tax the rich. It just doesn’t make sense in the first place that we’re giving tax breaks to these multi-billion dollar corporations. Ideally, the more you climb up the economic ladder, the more you should be contributing to taxes. After all, if they have enough money to donate millions of dollars to rebuilding Notre-Dame after the fire in Paris, then they have enough money to spend on the people that truly need it. Another criticism he’s faced from progressives is that he doesn’t believe in free higher education compared to others like Bernie Sanders and Elizabeth Warren. He basically devalues the importance of a college degree and believes that his UBI plan would just cover the cost of college anyways. On Twitter, he mentioned that the “underemployment rate for college grads is 34% overall and 44% for recent college graduates” and that we should “stop pretending that colleges degree create jobs.” To a point, I certainly see where he is coming from. After all, he is a tech CEO and values entrepreneurship. And of course, his biggest criticism right now is that he is just not that well-known.

If you’re part of this “Yang Gang,” I urge you to tell all your friends about him. The fact that the mainstream media has chosen to blacklist Yang from their coverage, shouldn’t prevent us from ensuring his message is spread.

Fox News has already tried going after Yang by calling him a “socialist” and the other news outlets will try to undermine him since he isn’t part of the establishment as they did with Bernie Sanders in 2016. We still have a long way to go when thinking of who to put up against Donald Trump for the 2020 election and Andrew Yang is definitely a candidate to learn more about.

Dating for Dorks: Is Dating Asian...