A new image from the upcoming “Justice League” movie has been released and shows Batman, Wonder Woman, Cyborg, Flash, and Aquaman standing together on a platform. 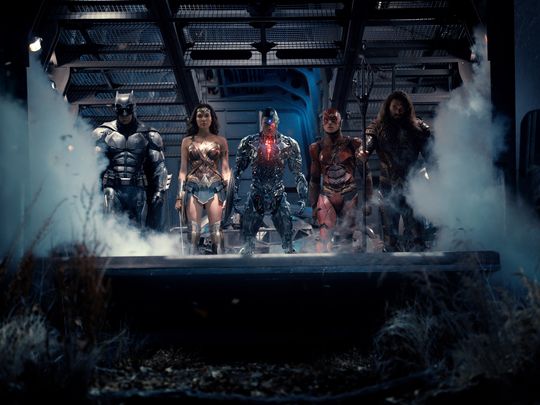 Aquaman and other members of the Justice League appear to be practicing their brooding. Courtesy of Warner Bros.

Anyone ever wondered why scenes like this have steam or mist shooting on the sides? It just looks right, but why? Meaningless questions aside, the biggest takeaway from this picture is that Jason Momoa’s Aquaman has chosen to fight alongside his fellow superheroes. If I had to base it off the trailer, I wouldn’t have expected much cooperation from his, as Ben Affleck’s Bruce Wayne found out first hand. Maybe Batman shouldn’t have made the talking to fish remark and left the jokes to the Jared Leto.

We also get to see more of Batman’s tactical suit in all of its epic glory. Did anyone else expect Ray Fisher’s Cyborg portrayal to be bigger or at least a little taller? Come on, this is an amazing athlete who happened to become part-robot. Surely he should have a presence as intimidating as Batman and Wonder Woman. I wasn’t expecting a slimmed down version of the Terminator.

Hopefully, he has a battle mode where he mechanically beefs up for combat. Maybe he’ll just need to #JustSayTheWord?

How ‘The Office’ Became the Most-Watched...