Batman: Death in the Family – An Interactive Movie Giving Fans the Choice (Again)

Warner Bros. Home Entertainment and DC Entertainment are taking their first-ever venture into interactive storytelling with an adaptation of the landmark Batman: Death in the Family.

Fans may recall Death in the Family as the monumental storyline from DC Comics in the late 1980s which had them vote by telephone to decide the ending – does Robin (Jason Todd) live or die? There’s no better comic book storyline I can think of than this to use with interactive storytelling.

If the phrase interactive storytelling sounds like another fluffy buzzword, then don’t worry as I’ll be explaining exactly what it is and how it differs from a traditional home release film.

Through navigation via the remote control, viewers can make choices that ultimately impact the overall direction of the film. 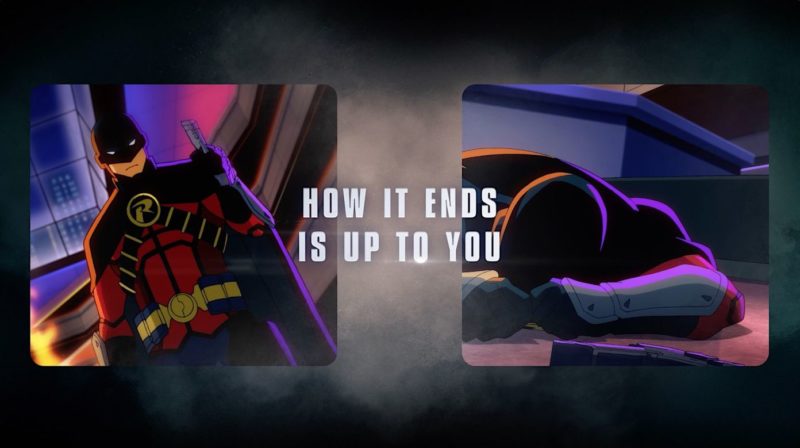 How it ends is up to you

Think R.L. Stine’s Goosebumps books with their “choose your own adventure” format which directs readers to different pages based on choices made at the end of chronological passages.

A more recent example of interactive entertainment that you may know about if you’re up-to-date with the best of Netflix’s content library is Black Mirror: Bandersnatch, which came out in December 2018 and involved a “choose your own adventure” book in the episode’s plot. (Very meta).

From the trailer, it appears there are 3 main endings:

If Robin cheats death, I believe he becomes Hush.

If Robin dies, the events of 2010’s Batman: Under the Red Hood unravel.

If Batman saves Robin, Jason goes on to grow up into Red Robin.

I’m excited to play through all of these scenarios and discover all the possible endings.

Batman: Death in the Family is produced, directed, and written by Brandon Vietti. Bruce Greenwood, Vincent Martella, and John DiMaggio reprise their Batman: Under The Red Hood roles of Batman, young Jason Todd, and The Joker, respectively. Other featured voices are Zehra Fazal as Talia al Ghul and Gary Cole as Two-Face and James Gordon.

Batman: Death in the Family will be available digitally on August 23 and on Blu-Ray and DVD on September 8 this year.