Elysian Arts – A Dance of Fire and Air

When 23-year-old aerialist and circus art performer Shawna Sanders says she plays with fire on a regular basis, she isn’t being metaphoric.

Whether it be hanging from a piece of fabric 80 feet in the air or showcasing her fire poi skills in front a few hundred onlookers at a corporate event, Sanders’ daily routine represents a sharp contrast to what most people are used to.

Over the past few years, Sanders has developed what originally began as a hobby into a full-time career alongside her boyfriend and fellow circus artist, Walter Heth. Recently, they formed their own production company known as Elysian Arts which provides world-class circus acts at both a local and international level.

Dorkaholics sat down with Sanders to discuss her first paid gig as an aerialist, the thought process behind choreographing a routine and the payoff of doing what you love for a living.

In your own words, how would you describe aerial performance?

I would define it as an acrobatic dance involving a hanging apparatus. Basically, you have some sort of apparatus rigged from a ceiling or trussing anywhere up to 80 feet high, though sometimes it’s even a bit higher. The performer is either lowered down from the ceiling or pulled up from ground level. Once in the air, the performer maneuvers through space both vertically and horizontally to create intriguing shapes as well as shock the audience with death-defying drops and catches. As a whole, aerial performance requires an immense amount of strength, body awareness and grace. 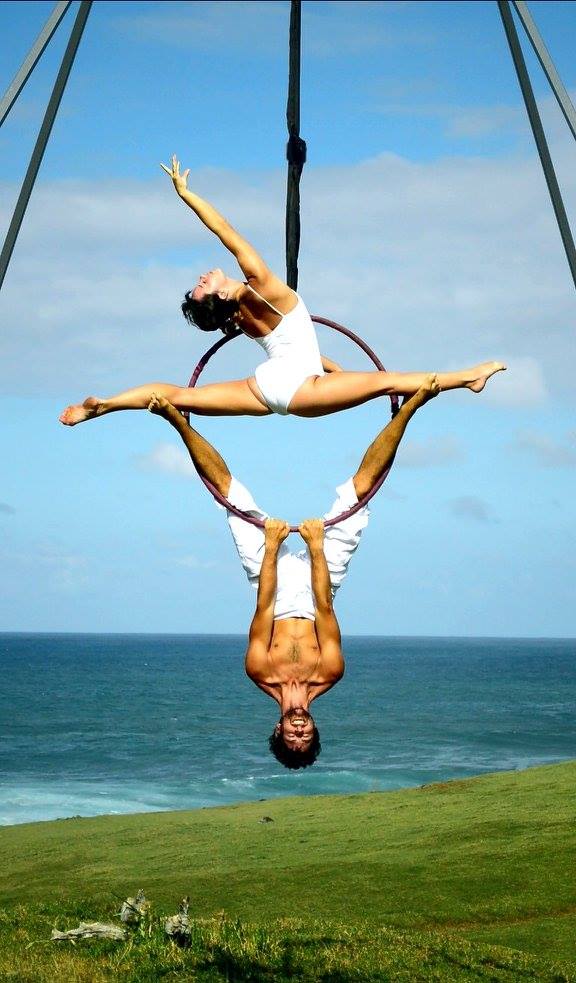 How did you originally get involved with aerial performance?

I remember the exact moment clearly because I immediately fell in love with it. I was at a gym here in Orange County practicing my tumbling skills, when I stopped dead in my tracks to see a lady on aerial silks. She was doing a move called rotisserie, which is where you roll your body up the fabric higher and higher while in an oversplit position. I ran over to my boyfriend and told him “I need to do that!”

Unfortunately, I was too nervous at the time to talk to the woman, so I went home and researched it all night. I hoped she would be there again the next time, but instead met a guy named Albert who finally got me started. He was really nice and taught me a few things that night. I had no idea how difficult it would be to execute the moves.

What was the initial reaction from your family and friends when you started doing this? As you’ve gotten more gigs and formed this company, have their attitudes changed?

My friends have always been supportive of my cirque endeavors. Most of my friends are performers as well so they’ve been wonderful in sharing their experiences and we’ll even go to auditions together sometimes. My family initially thought it was just a hobby and were wary about my safety. However, when I started getting bigger gigs that would fly me to other places. They realized that it really was my passion and that the companies I was working with were all legitimate. They trust my judgment nowadays.

What do you think are the most important characteristics of an aerialist? Obviously, it seems like flexibility is an important one.

Aerial work requires so much from you. For example, if you take two weeks off from training, it takes another week just to regain your strength. The hardest part about aerial stuff would definitely be endurance. It’s easy to take a 30 second sequence and make it beautiful, but it’s a completely different story when you try and put together a six to 10 minute piece. You really have to choreograph in a particular manner that allows your body “breaks” in-between the very strenuous climbs, sequences and drops involved in a routine.

Once you have the endurance to even attempt a routine, the most important characteristic would be artistry. I know lots of amazing technical aerialists who can bust out moves that most people only dream of, but without the artistry behind the movement it seems bland and meaningless to me. Aerial performance is an art just like dance; technique and flexibility definitely help but giving intention to your movement and flowing smoothly through and around your apparatus makes a truly great performance.

Can you recall where your first paid gig as an aerialist was and how it went?

My first paid gig was for an artist that I am now friends with, by the name of Sam Smith (and no, not the one you’re thinking of) who creates music, drawings, sculptures and is legally blind and deaf. He was searching through Facebook for an aerialist to be in his music video. I contacted him and we met up at Muscle Beach in Santa Monica to film. It was an amazing experience meeting him and the videographer. We were trying to be beat the sunset so it was a bit rushed, but I loved every second of it and was shocked that somebody would pay me to do what I loved.

Fire freaks me out and I know that you do fire poi and fire hoop performances as well. I’ve always wondered how you practice something like that. Do you actually practice with fire or is there a way of simulating it without the possibility of getting burned?

There are two ways to go about practicing fire dancing: practice with fire from the beginning or learn how to use the prop first and introduce fire later. I learned how to use the props I perform with before I used fire. I was terrified of adding fire in the beginning, but after experimenting with the flame and learning how fire moves and reacts, it wasn’t as big of a deal.

The biggest factor when learning how to fire dance and even after you are experienced is safety. Performers have a ton of protocols to follow that ensure only a minor burn would occur if there is a mishap, but in general, burns are not completely preventable. Every fire dancer I know, even the most advanced ones, have been burned multiple times. Fire is a fickle element and requires close attention and a watchful eye.

You’ve got to work for various companies and venues as a performer. What has been your best and worst experiences so far? Have there been any negative experiences?

Occasionally you have bad experiences as a performer but it’s just part of the business. You’ll get employers or clients not wanting to follow contracted agreements, or they’ll exhibit very unprofessional behavior. For the most part, you can tell before booking a performance who is going to be professional and who is not. I’ve come to the point in my career where I would rather not book a gig if it means dealing with unprofessional or difficult clients. If you’re looking to be a professional and care about your art, then the money you would get from the gig is just not worth the time and energy it takes to deal with some people.

My favorite experiences so far have been at large-scale events like EDC Vegas/Mexico and Gaslamp District block parties in San Diego. These events always have the best costuming, makeup and character roles. I really enjoy having a character to embody, whether it be a gargoyle, toxic bunny or showgirl. It provides you a challenge from the normal routine and gives you creative freedom to not only perform aerial, dance or fire, but to act as well. The people attending these events are always so happy and interactive with you. When you’re able to put hundreds of smiles on people’s faces with that little bit of extra performance, it makes all the training worth it.

What is the typical reaction you get when people ask what you do for a living?

A lot of people just don’t understand what I do and there’s definitely a lot of confused looks. Usually after a minute of trying to explain they’ll say “Oh, is it like Cirque du Soleil?” and I just agree because it’s one of the only things the general public knows about cirque arts. I sometimes show them my website or Instagram page to give them an idea of what exactly it is. Everyone loves it and is fairly impressed once they understand.

What goes into choreographing a performance? Are there common elements that most acts share?

Usually choreography is created for a certain song that you can take with you to another performance if the next client likes it. If the client doesn’t like the song, you can try putting the same choreography to new music and it sometimes works with a little tweaking. A typical aerial performance will include some floor work, climbs, spinning sequences, flexibility poses and typically a big drop at the end. An aerial performance can last anywhere from one to 15 minutes. With the shorter routines, I will usually try to make them more flashy because there is such limited time. The longer the routines are, the slower the movement on the apparatus is, in order to conserve energy. But overall I would say the average routine length is around three to six minutes for a choreographed number. 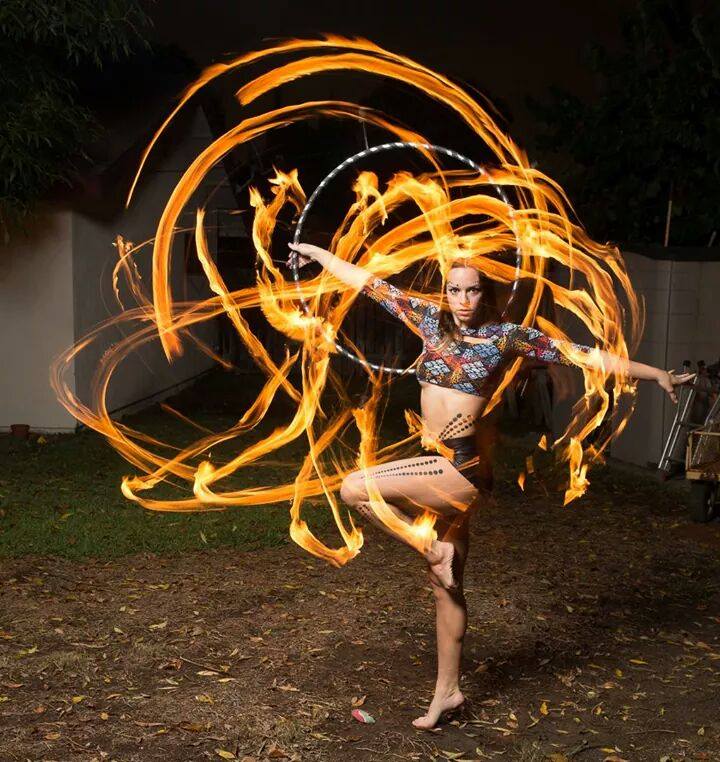 Taking that leap and starting your own company–at any age– seems pretty intimidating. Why did you two ultimately decide to form this company and what type of clients have you gotten so far?

Walter and I have been performing for years and it’s a passion that we both share. We used to have our personal areas of expertise, but in recent years we’ve trained together and created routines that require one another. I love that we can combine our skills and create new art. As a former dancer, I’ve always loved the idea of partner work and aerial and acrobatics open up new ways of doing that. Together, we focus on routines that are lyrical and artful. We saw creating Elysian Arts as a great opportunity considering we have a real connection as partners, work well together and live together too. It allows us to travel to different parts of the world and perform without any difficulty. Our most frequent clients are definitely wedding and corporate event planners. Cirque arts are getting increasingly popular and a lot of people getting married love that we have this real connection.

Is there a particular venue or location that you’d like to perform at someday?

I really want to perform at Ultra Music Festivals. I’ve never been in state during the audition period so I haven’t had the opportunity, but this year it is my goal to finally attend a live audition and perform all over the world as an aerialist and dancer. I have another goal of performing with Walter for a cruise line gala. Hopefully in the next couple of years I will be able to accomplish them all.

Sean Stroh is a freelance journalist for a number of local publications including The Orange County Register, Concert Guide Live, Coming Up Magazine and Orange County Culture Magazine. One of his favorite spots in the OC is the Redwood Grove in Carbon Canyon Park - an unexpected 10 acres of Redwoods in a regional park.

Recognizing the Morally Ambiguous Women of...