The Featured Cosplayer for March 2016 is none other than cinecosu on Instagram. We met up with her at the local arcade for an interview and photoshoot with her cosplaying as Arcade Ahri from League of Legends.

CINECOSU: Dominique is good haha. Most people call me Dom. I’ll respond to CineCosu too, it just may take a couple tries. ^^;;

NB: How did you get started as a cosplayer?

C: I’ve actually been cosplaying since I was like 14 years old, technically. I used to be on DeviantArt as a photographer and writer, and somewhere along the line, I started seeing photos of people dressed up as characters from like Yu Yu Hakusho and Death Note and Kingdom Hearts — specifically Jin (BehindInfinity) and Xty.Kim (who was going by Lil Krn Yna at the time). And I just remember thinking “that’s freaking awesome! I wanna do that!” So I think for AX 2006, I asked my grandma, who was a seamstress in the Philippines, to help me make my old elementary school uniform into Kairi’s uniform from KH2, and that was my first official venture into the world of cosplay.
… And then I never cosplayed again until 2014 lolol. Back then I wasn’t really tuned into what cosplay was, I just knew people went to cons and dressed up. But after college, I met some friends who were really into it and who encouraged me to start up again, and the rest is history. 🙂 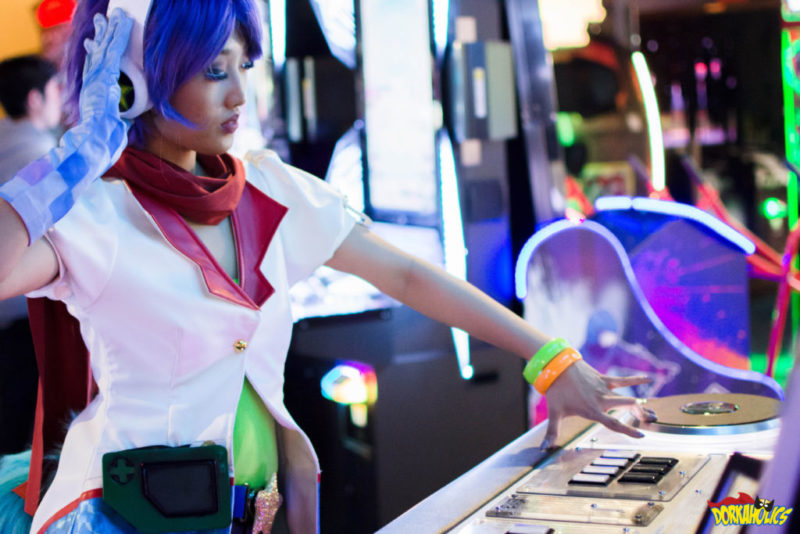 NB: What benefits does being a photographer lend to cosplaying?

C: There are a few different things, but I definitely feel like they both feed into each other. As a cosplayer, also being a photographer has helped me be aware of what lighting and body and camera angles work for me. For example, I don’t like my smile, so I know if I’m doing a happy character I’ll either have to smile or cover my mouth when I laugh, etc. And then as a photographer, also being a cosplayer has helped me fine tune my directing. I know how awkward it can be if you don’t know how to pose or are worried that your armor is falling off or things like that, so as a photographer, I know to address those things right away to make sure the cosplayer feels comfortable and confident I’m going to make them look good. 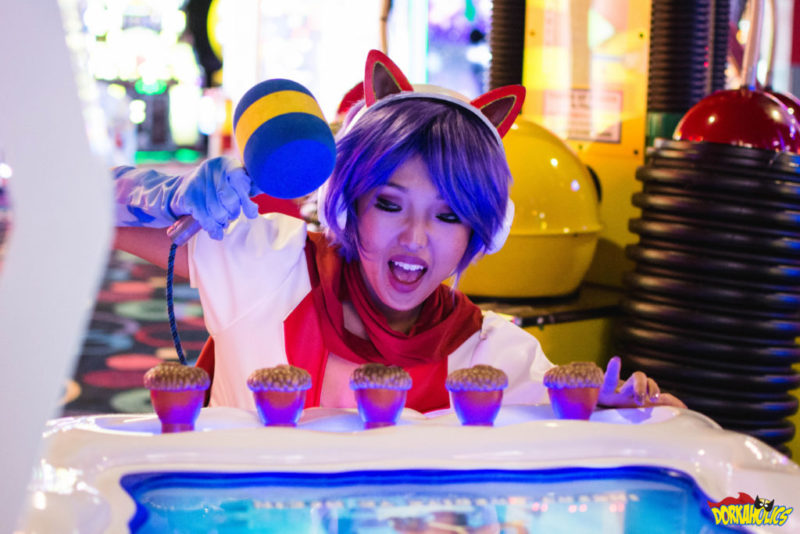 NB: Are you currently working on any cosplays you can disclose for readers?

C: Yes! Right now I have an FFXIII Lightning based on Hannah Alexander’s fanart, which I’m hoping I’ll get to shoot while I’m in Japan for the next couple of weeks. I’m also doing Elementalist Lux (Light version), and a Steampunk Orianna based on fanart by Goodnightsugarart — both of which will debut either at Fanime or Anime Expo.

NB: Which was the most challenging of your costumes to make?

C: Full disclosure: I do not make my costumes. I’ve modified small things here and there and made tiny props, but for the most part, I commission out — which itself has been awesome. I’ve gotten to work with some really talented seamstresses and prop makers like Lady Narven or Tabiti Props or Creature Habits, whose work is just beyond anything I could even hope to create. I feel like doing it this way has definitely allowed me not only to feel badass as a cosplayer but also focus my efforts on my own craft and being a better photographer.

That being said, the most difficult thing I’ve made is my Sailor Moon wigs, which I have done on my own twice now and still haven’t gotten right. The styling struggles are so real! Dx

NB: Tell us about #cinescouts

C: #Cinescouts is our in-house name for an ‘90s inspired Sailor Moon fashion shoot I just did with Stella Chuu, RiotJynx, Hendoart, Akemi101xoxo, and Maid of Might. The idea was to do this whole high production fashion editorial, but with cosplay. I’d wanted to something like this for a while, but never imagined I would get such high profile cosplayers to work with me. Or that is, I wanted to but didn’t think it would happen for a good few years after I’d already gotten my name out there in the cosplay world. But one thing led to another, Koreanbarbq told Stella Chuu about me, she followed me on IG, I totally freaked out and fangirled and asked her to shoot, to my surprise she said yes, and that just kind of got the ball rolling. I was still super scared to ask anyone else, but my partner JustinElement encouraged me just to go for it, what did I have to lose, and here we are haha. In the end, we ended up with an amazing video editorial, BTS video, and fashion magazine spread, and just got featured on Kotaku the other day, which is freaking nuts. All in all, it’s definitely been an incredible experience.

NB: What’s one of your most memorable moments while in costume?

C: Probably meeting RiotJynx. Justin and I were working a photobooth at Riot for Halloween last year and at some point, I recognized her as Graves and was just like internally screaming, “!!!!! DO YOU KNOW WHO YOU ARE RIGHT NOW?!” I mentioned this to Justin and he’s always been really good at approaching people, so I think he just introduced me and of course she ended up being an amazing and down to earth person. We bonded over being shy and how cosplay helps with social anxiety and she even complimented the Arcade Ahri costume I was wearing at the time. I’m sure there are more amazing moments, but that one just sticks out in my mind. 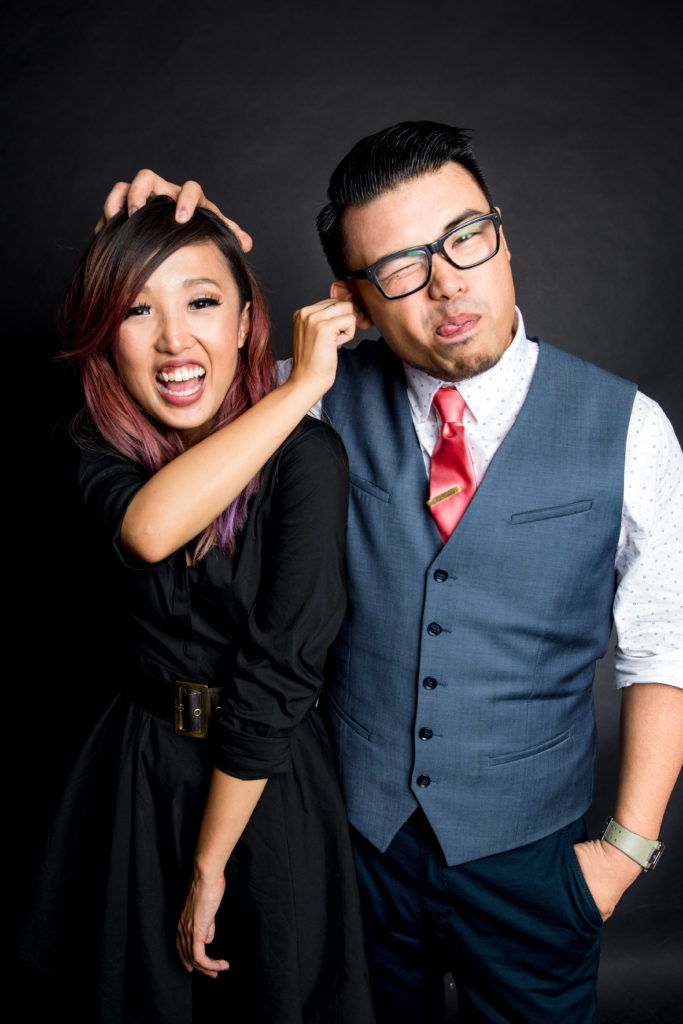 Dominique Zamora with her partner Justin Element of CineCosu Studios.

NB: Do you have other cosplayers that you admire?

C: Oh, several. Of course, the girls I worked with for #cinescouts. I’ve looked up to them all forever for being not only amazing at what they do, but just the sweetest and coolest people ever. The Gosiengfiaos, Alodia and Ashley, are total sister goals. My waifu waifu_gooby, whose work is amazing and who was my first cosplay partner in crime. And then all the amazing and beautiful new friends I’ve made in the past year, including but not limited to: Monster Poh, Annjelife, CosplayProdigy, Goodnightsugarart, KellyJellyCosplay, Linzorz, Lemon Bell, TheRaeStew, UtahimeCosplay, Awkktopus, so many others… And, I guess, the #cinesession boys too. 😛

(Ahaha no but for reals, shout-outs to Justin and KCStudios and Epictoast and Koreanbarbq and Richard Perry and Nomis and SquareNoodles and Paperartwork and Possiblei and Bakephotogari and Remcreate and Brandon — they’re all mostly photographers and two cosplayers, but nevertheless totally worthy of admiration. <3)

NB: Where do you find inspiration?

C: I try to find inspiration everywhere, mostly in relation either to shooting and editing style, or storylines and themes for shoots. I try to do something different with every shoot I do, whether that’s learning how to evoke emotion better or just using different composition or lighting techniques. The nice thing about cosplay photography is that it’s still fairly new as an artistic field, and with the subject matter being so broad and fantastic, the possibilities for creativity are literally endless. There are a few photographers whose work I definitely admire, like Alive Alf or Bunnytuan or the folks from Tux Team (holy freaking crap), but yeah I’ll take inspiration from anywhere.

NB: What are some of the events you will be attending later this year?

C: My con schedule is pretty open atm, just depends on work and if I’m shooting weddings on those weekends. Right now, I’m for sure attending Fanime and Anime Expo and am thinking about ghosting SDCC and Blizzcon.

Superman Smashes the Klan is Inspired...