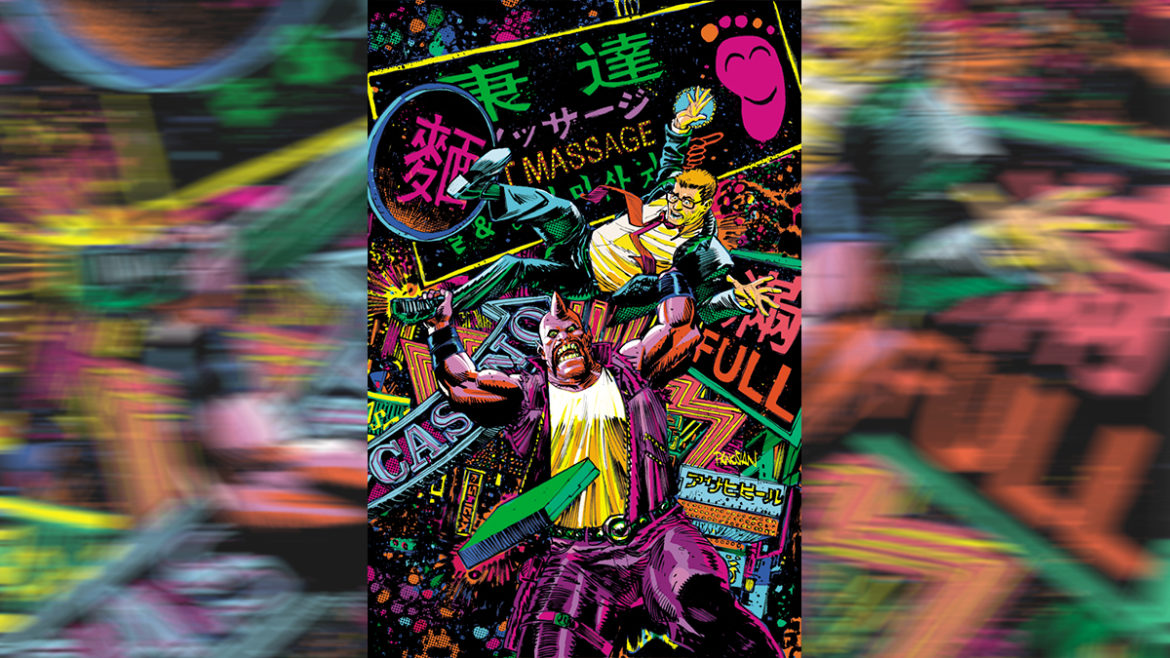 Welcome to Meet a Dork, a feature on Dorkaholics where we get to know a fellow dork somewhere in the world. Through Meet a Dork, we hope to not only establish new friendships with other fans but showcase the vastness of our community, the diversity of backgrounds, and the unique stories of each person.  This week, we have comic writers Eric Peterson and Joe Aubrey here to discuss their new series, Space Bastards.

Neil Bui (NB): So, we have to start with the most eye-catching aspect of this new series: mercenary…mailmen?? In space? Why postal couriers? Was there something that inspired you guys to build a series around this occupation?

Eric Peterson (EP):  I think the roots of using the postal service go back to how this all started.  I drew characters in notebooks when I was in junior high, mostly like Han Solo wannabes. Just an excuse to do more with the seedy underbelly glimpsed in the movies I grew up watching. When I was in film school, my friends and I would build these spaceship sets in my garage and backyard and film those characters there.  Davey Proton existed at that point, albeit really different.  I knew I wanted to tell stories about smugglers, heists and stuff.  At the time I was a TV producer, and I was young, so it was pretty nuts.  I was sleeping under my desk twice a week.  I was constantly fearing for my job. I think that feeling of being coin operated made me translate the smuggler archetype into whatever occupation involved moving an item from one planet to another, and thus Davey worked for the postal service and got into trouble a lot.  Years later, with Joe’s involvement, the Intergalactic Postal Service evolved into what it is today in comic form.

Joe Aubrey (JA): The Intergalactic Postal Service is descended from the USPS, but it has morphed into something more like an Uber or Postmates gig – except deadlier and potentially more lucrative. For the record, we came up with that before Uber or Postmates actually existed. But instead of developing the idea into a billion-dollar business, we made Space Bastards which has all but depleted our life savings and alienated us from our families.

NB: In any comic world, you obviously have the freedom to create things that would never exist in the “real world.” How did the space setting, in particular, enhance and/or hinder the stories/characters you developed for Space Bastards? What freedoms did it give you creatively?

EP:  I think early on, even before the comics, Joe and I realized that there is sort of a Venn diagram to the language of the universe.  If we played too far one way it would become more compelling from a science fiction standpoint, but also less relatable and less interesting for us to act out from a dramatic perspective.  Go too far the other way and we’d get the opposite.  We also wanted pretty early in the process to ensure that we were writing something distinctly different from the language and settings of what we grew up watching.  This couldn’t just be another Star Wars, or Serenity, or Marvel galactic stuff. It is set in space, but it is a very American-made interstellar society, possessing all the frailties and social gaps that one would expect. In Space Bastards, people share the same problems as us.

JA: Creatively, the space setting is very fertile.  It’s inherently dangerous due to vast distances and natural hazards – so it’s always easy to put our characters in jeopardy. Don’t worry, there are still flamethrowers and beheadings and getting thrown off of tall buildings. But with this outer space setting, we have been able to kill postal workers in ways that just aren’t possible in a real-life terrestrial environment.

JA: For a long time, we had a group of characters and their basic backstories worked out, but they were positioned as supporting characters. When we decided to bring in other artists, we had the opportunity to really focus in and add depth to some of the cast. In doing so, we also got to infuse a lot of background detail and flavor into the Space Bastards universe as a whole. We’d check the balance by asking ourselves, “Does this story featuring this character enrich or clarify other existing details/situations/character dynamics?” As a result, multiple origins and points of view have really enhanced the story and provided more world-building than could have been accomplished with just one main character.

EP:  I think I worried about that way back at the beginning, but it ultimately ended up being pretty perfect for me— right now year one’s cast explores just about all the nooks and crannies that I look for in terms of why someone would risk being shot at for a living.  The cool thing about the Humanoids partnership is the ability to truly explore facets of all of the cast that maybe one miniseries wouldn’t allow us to do.

NB: I’ve always wondered how multiple writers work on a series together. Could you walk us through how you two collaborated? Were you sitting in the same room together? Email? Phone? Zoom sessions? How exactly did you bring the words/text of this series to life?

EP:  I love it and I think Space Bastards requires it.  I’ve co-written other things before, but Space Bastards is unique in terms of production.  Joe and I make really detailed outlines.  A 28 page single issue comic may be like 12 pages of outline.  We like to outline an entire year of story at once and figure out where the quintessential breaks in issues work best. Then we look at the cast and what presentation order is best for their development. In the case of Space Bastards I would argue that there’s two. Joe and I then figure out what our dream list of artists is for each story, and once we know for sure that an artist will handle a specific issue, we consume a healthy diet of only that artist’s other work.  So for example, if Simon Bisley is doing an issue, I’ll read nothing but Lobo and Slaine and DREDD and then sit down to write the script so that hopefully my panel writing is as close to that artist’s natural visual language as possible.  And then Joe and I volley it back and forth until we’ve gotten just about as much of a surprise reaction out of each other as we can out of that script.  If it doesn’t make us laugh or cry or whatever when we feel it needs to, we take a pause and break it apart.

NB: What was the experience like working with Darick Robertson? Did you guys discuss The Boys at all during the creative process? OR Were you two inspired at all by his art on The Boys?

JA: Working with Darick was an incredible experience. He understood Space Bastards immediately and had a tremendous impact on many of the characters and the structure of the story within the individual issues. His greatest strength, I think, is communicating emotion through the facial expressions of characters. We have an alien character that basically doesn’t have a face.  He’s got a mouth that’s kind of like the hole on a drawstring bag. Essentially a sphincter with eyes like a spider just above it. Darick had no problem getting a full range of emotional expression out of that guy. Darick’s got a great sense of humor and can effortlessly make murder, pain, and failure funny on the page.

I don’t recall ever discussing The Boys, but I remember chatting about Ballistic and Transmetropolitan because of their sci-fi settings.

EP:  I grew up reading Transmetropolitan.  I absolutely love it.  I’m a diehard Hunter fan and also Darick and Warren, so it just was glorious for me.  It was amazing to learn that our top pick for creating the visual look of the Bastards actually would come on board to do this as co-creator.

NB: If each of you had to pick one character in Space Bastards that you feel will resonate the most with readers — who would it be and why?

JA: I’m hopeful there’s something relatable about each of our characters. Most of them are defined by their flaws, setbacks, and bad decisions. As far as who or what will resonate the most, I really don’t know. The most memorable moments of actual pathos, for me, tend to involve our most unlikable characters.

EP:  Yeah, it’s hard for me to pick one as well.  There are certainly characters that resonate more with me at the beginning than others because some decrepit piece of my DNA is in there, but I could ultimately say that about the entire cast as well by the end of year one.

NB: How do you think a real postal worker would respond to this series and its characters? Have you received any feedback from people in that industry?

JA: In general, people in the delivery business get a kick out of the idea. The most interesting feedback I’ve gotten was at SDCC in 2019. A middle-aged woman bought Space Bastards Volume 1 at our booth. Surprisingly, she came back the next day, pulled me aside and told me she’d read the entire thing in her hotel room. She said years ago she worked as a bike messenger in San Francisco and Space Bastards was the most accurate depiction of the job she had ever seen. She really seemed to enjoy it and wondered if anyone involved in creating it had been a bike messenger (none of us had). I remember asking her if deliveries were anywhere near as cutthroat in real life as we had in the book and she said, “Oh yes — it was very competitive.”  I thanked her and have since made it a point to never interfere with bicycle couriers.

Visit the Kickstarter page for their upcoming volume 2: https://www.kickstarter.com/projects/roysharpton/space-bastards-volume-2-hardcover