More than 40 years after Richard Nixon resigned as the 37th President of the United States, his legacy remains an ongoing topic of discussion among scholars, historians and probably your parents. On one side of the argument, you have those who view Nixon as a cartoonish, pathetic man, who abused his presidential power to cover-up his administration’s shady dealings. On the other side, you have the hardened Nixon loyalists, who see the man as a somewhat tragic figure, believing his accomplishments have since become overshadowed by Watergate.

So how should we view the man’s 5+ years as President?

This is where I come in. As the first ever Dorkaholics Director of Historical Publishing, it’s my job to educate you all. While many have probably heard of some of President Nixon’s major accomplishments such as the ending of the Draft, the creation of the Environmental Protection Agency, his monumental visit to China, the ending of the Vietnam War and the lowering of the voting age to 18, there remain many forgotten feats of the Nixon Administration.

Wait, weren’t all schools magically desegregated in 1954 when the Supreme Court ruled in Brown v. Board of Education that “separate educational facilities are inherently unequal“? I’m sorry to inform you that your public high school history teacher (who also doubled as the defensive coordinator for the JV football team) misinformed you. The most meaningful court decision didn’t come until fifteen years later, in October 1969, when the Supreme Court ordered immediate desegregation of public schools in the south in Alexander v. Holmes County Board of Education. School districts that had worked the system for more than a decade could no longer do so.

The ruling placed the task of completing the task the Brown rulings intended to resolve fifteen years prior on the shoulders of the Nixon administration. While President Nixon was certainly no crusader on the issue of school desegregation, it would be under his presidency that the largest public school desegregation effort in American history would take place, less than a year after the ruling was handed down. By end of the 1970-71 school year, the number of African American still attending all-black schools in the south had dropped from 68 percent in 1968 to 18 percent. A few years later, the number was close to zero.

At one of President Nixon’s first press conferences, a female reporter asked a question that many had refused to ask.

“Mr. President, since you’ve been inaugurated, you have made approximately 200 presidential appointments, and only three of them have gone to women. Can we expect some more equitable recognition of women’s abilities, or are we going to remain the lost sex?”

Without missing a beat, President Nixon responded: “We’ll have to do something about that.”

The following year, President Nixon ordered the formation of The White House

Task Force on Women’s Rights and Responsibilities. In December 1970, the President approved an action memo that ordered the implementation of many of the Task Force’s key recommendations. By April 1972, the number of women in policy-making jobs had tripled from 36 to 105.

As a result of the president’s support, more than 1,000 women were hired or promoted into the middle management ranks of career civil service. All of a sudden, women were serving in positions such as admirals in the navy, FBI agents or Forest Rangers.

By March 1973, the number of women in top jobs had quadrupled and the president  had made Anne Armstrong one of his advisors, the first woman to ever hold such a position.

In his 1972 State of the Union Address, President Nixon told the nation: “While every woman may not want a career outside the home, every woman should have the freedom to choose whatever career she wishes, and an equal chance to pursue it.”

“No Bulldozing” by dignidadrebelde – http://www.flickr.com/photos/dignidadrebelde/5964716920/. Licensed under CC BY 2.0 via Commons.

Despite never being more than a benchwarmer, President Nixon’s football coach at Whittier College made a long lasting impression on him.

The President once said that Wallace “Chief” Newman, who was a member of the La Jolla Band of Luiseño Indians, would have been a coach of a major football program–had he not been Native American.

“I think I admired him more and learned more from him than any man I have ever known aside from my father,” RN would later write in his memoirs. “He drilled into me a competitive spirit and the determination to come back after you have been knocked down or after you lose. He also gave me an acute understanding that what really matters is not a man’s background, his color, his race, or his religion, but only his character.”

While the Republican Party had a history of being hostile to Native Americans, the president made it clear that this wouldn’t continue while he was in office.

President Nixon’s stance on Native American affairs was laid down in a letter to Congress sent on July 8, 1970.

“From the time of their first contact with European settlers, the American Indians have been oppressed and brutalized, deprived of their ancestral lands and denied the opportunity to control their own destiny. Even the Federal programs which are intended to meet their needs have frequently proven to be ineffective and demeaning…The time has come to break decisively with the past and to create the conditions for a new era in which the Indian future is determined by Indian acts and Indian decisions.”

By the time President Nixon would leave office, the list of accomplishments toward improving the lives of Native Americans included:

The Navajo leader, Peter MacDonald, would later refer to President Nixon as “the Abraham Lincoln of the Indian people” for his work toward ensuring that Native American tribes were granted further autonomy. 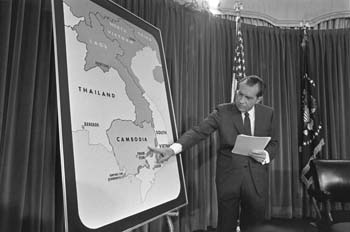 By the time President Nixon left office in 1974, the defense budget had been reduced to $371.3 billion, a significant reduction from the $523.8 billion defense budget set during the last year of the Johnson administration in 1968.

President Dwight D. Eisenhower, whom he served as vice president for between 1953-1961, firmly believed that the United States “could only be as militarily strong as it was economically dynamic and fiscally sound.”

By cutting down on military spending, President Nixon was able to pay for the social programs he felt the country needed. Despite the spending cuts during his time in office, many of the programs the Nixon administration began during this period such as the F-15, F-16 and F/A-18 are still in the force today.

In his acceptance speech at the 1972 Republican National Convention, President Nixon discussed his administration’s significant reductions in defense spending.

“Let’s look at the record on defense expenditures. We have cut spending in our Administration. It now takes the lowest percentage of our national product in 20 years. We should not spend more on defense than we need. But we must never spend less than we need.” 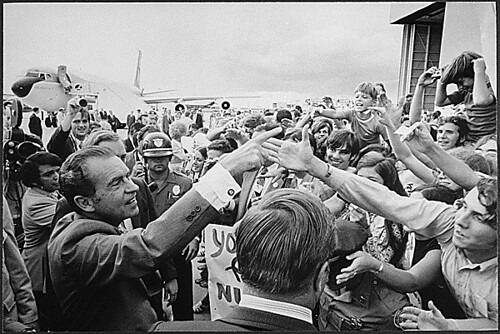 Just months after taking office, President Nixon spoke to Congress on the state of organized crime in America and laid out his plan to combat it.

“As a matter of national “public policy,” I must warn our citizens that the threat of organized crime cannot be ignored or tolerated any longer. It will not be eliminated by loud voices and good intentions. It will be eliminated by carefully conceived, well-funded and well-executed action plans.”

President Nixon’s plan revolved around expanding the budget for dealing with organized crime by $25 million, providing greater assistance and cooperation with state and local authorities, enacting tougher criminal laws and a reorganization of the crime fighting effort at the federal level.

The following year, on June 4, 1970, President Nixon announced the creation of the National Council on Organized Crime, a committee composed of representatives of all the Federal departments and agencies having major responsibilities affecting or affected by the activities of organized crime. The intention of the council was to target corruption in metropolitan areas throughout the country.

Four months later, President Nixon would sign into the law the Organized Crime Control Act of 1970, which intended to eliminate organized crime by enhancing the capability of the federal government to prosecute criminal organizations.

In addition, the Act would also create the Racketeer Influenced and Corrupt Organizations Act, commonly known as RICO, which established lengthy prison sentences for anyone convicted of two crimes from a list of thirty-five federal and state offenses within a ten-year period. Further, under the RICO Act associated members of a criminal enterprise could be tried for a crime itself, instead of conspiracy, if they only ordered, or participated in the planning of the crime.

By 1973, more than 2,500 people would be convicted on charges related to organized crime.

Sean Stroh is a freelance journalist for a number of local publications including The Orange County Register, Concert Guide Live, Coming Up Magazine and Orange County Culture Magazine. One of his favorite spots in the OC is the Redwood Grove in Carbon Canyon Park - an unexpected 10 acres of Redwoods in a regional park.

Nothing Can Ruin My Star Wars Childhood