Wow. While moviegoing audiences are only recently coming to know one of Marvel’s strangest characters, The Vision, through the films Avengers: Age of Ultron and Captain America: Civil War, comic book readers are likely much more familiar with him.  With a long and complex history, this bizarre synthezoid “son” of Ultron has spent many years saving the world as an Avenger.  But after all the great battles he’s fought and all the lessons he’s learned, his greatest adventure is only just beginning in the All-New, All-Different Marvel: Vision has built himself a family and is ready to settle down in the suburbs of Virginia. 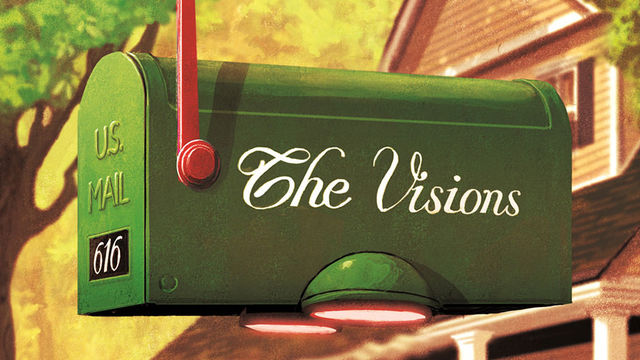 If you’re now thinking that’s the dumbest, least-exciting concept for a comic book you’ve ever heard, you’re certainly not alone.  I was definitely not excited to read this series, but after an enthusiastic recommendation from YouTube celebrity Comicbookgirl19 it seemed only fair to give it a shot.

Let’s be real for a second: I’ve read a lot of comic books over the years.  Yes, definitely more Marvel than any other publisher, but I love the medium and have seen it at its best and its worst.  The Vision does some things I’ve honestly never seen in a comic book before.  And it is absolutely in the running for best ongoing series I’ve ever read.  It’s not good…it’s amazing! 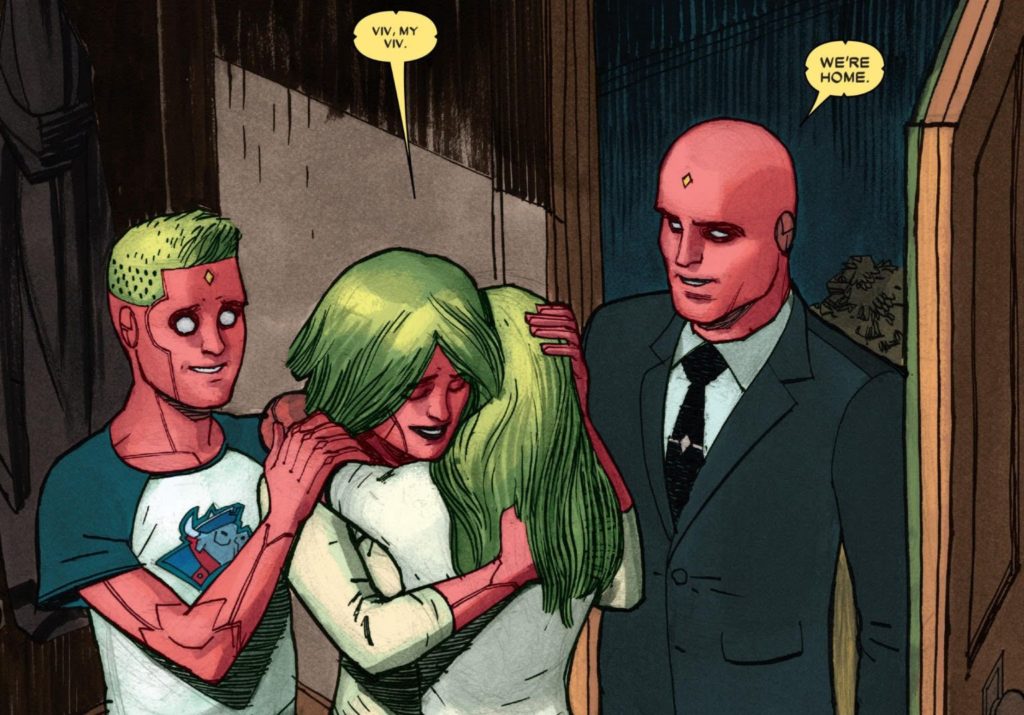 The unfortunate part here is that I can’t really talk too much about it – it’s one of those “if I say much of anything, it spoils the surprise” kind of stories.  I can tell you it’s about the Vision wanting to become more accepted, more “normal” in human society which he attempts to do by building three more synthezoids in his image: his wife Virginia and twin children Viv and Vin.  Together they are “the Visions” – an ordinary suburban family who just happen to all have the exact same peculiar powers as Vision.  The kids go to school, Virginia keeps a tidy house, and Vision commutes to the White House to act as the Avengers’ liaison.  It’s the perfect picture of archaic 1950s white American values. 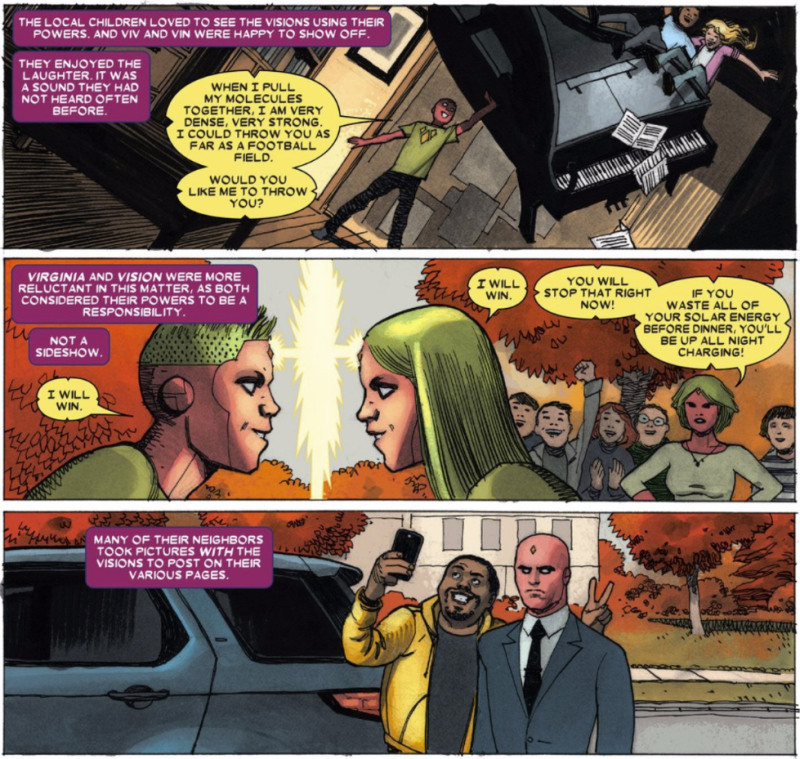 …and then the shit goes down.  This book is one part Leave It to Beaver, one part John Hughes high school drama, two parts A Series of Unfortunate Events/Pushing Daisies, and three parts unexpected insanity.  I do honestly wonder how much writer Tom King admires the works of Lemony Snicket given the unsettling tone and deadpan delivery The Vision relishes.  Is it humorous?  Absolutely!  Though much of the humor is quite muted and subtle, which in itself is even funnier.  Is it disturbing?  Absolutely!  There are some very serious, shocking, and horribly depressing themes explored here.  Is it addicting?  You have no idea just how much… 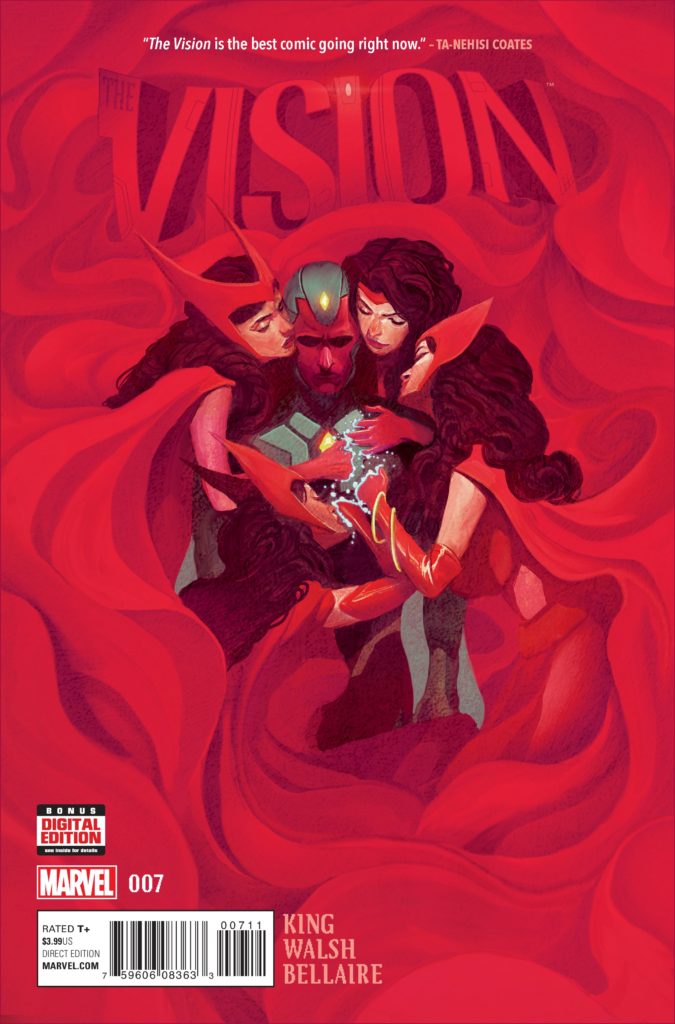 Now, long-time comic fans who are aware of Vision’s romantic history might be a little saddened to see him with another woman besides Wanda Maximoff, the Scarlet Witch and his ex-wife.  While she may not presently be in his life (she’s off in her own horribly boring and lazy solo series at the moment) they definitely acknowledge his past.  All those classic stories involving Vision, all his past exploits remain relevant to his life today in various ways – some haunting him, some helping him.

The artwork is stellar quality, too.  Gabriel Hernandez Walta’s style ditches the more traditional cartoonish vibe for grittier pencils and some dark imagery.  You really have no problem believing The Visions exist.  Given the complex nature of the story in The Vision, the characters must be intensely emotive – the reader must know what a character is thinking simply by looking at them.  Walta delivers, and then some! 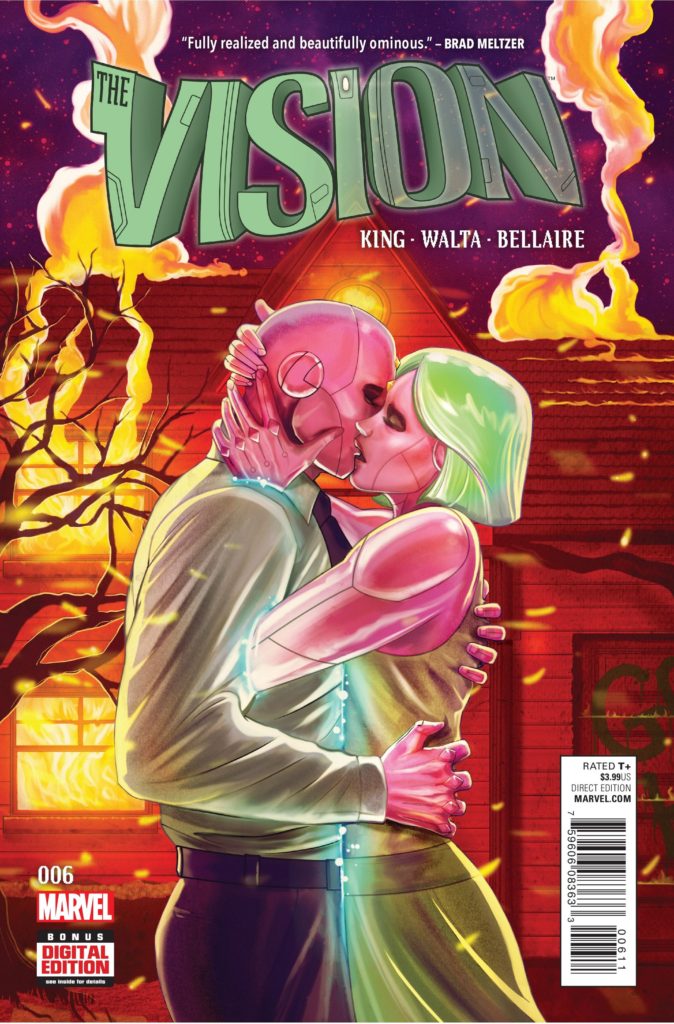 So I realized about halfway through writing this article that it may be kind of useless.  Not being able to talk about plot details doesn’t make for a compelling argument, and that might be why this title hasn’t really received the recognition it deserves.  “Trust me, just read it” isn’t very enticing for most people, but I’ll give it my best shot:

Trust me, just read it!

The Vision is easily one of the best comic books I have ever read.  If you’re a fan of macabre, understated humor this is the book for you.  If you’re a fan of dark, twisted storytelling you must take a look.  It’s a strange and unsettling adventure juxtaposed by a framing of classic family values.  Everyone has a secret…

What do you think about The Vision?  Let us know in the comments below!

Interview with Daniel Kaito from Strike...