A Night of Party Hopping at Game Developers Conference 2017

When I went to pick up my badge at the Moscone Convention Center yesterday the exhibit floors weren’t even open. Seminars, panels, and summits were what I presumed I’d be hopping into for my first day. I was a little — OK a lot —  intimidated so I brought along my friend Frank* (names have been disguised because Frank wants to stay an enigma) — OK boyfriend, whatever,  who works at Twitch in hopes that he would help me navigate through Game Developers Conference 2017. As soon as I picked up my shiny badge I hurried to hang it around my neck and Frank looks at me like I’m a filthy noob monster and stops my arm mid-motion.

“Put that shit away.”

I look at him with guilty eyes, even though I have no idea why I should feel guilty.

I trail off because Frank is already 10 steps ahead of me, walking out of the press lounge into a sea of smart-looking jean/blazer combos and laptop carrier bags. He hollers over his shoulder and waves me forward, “We’re getting drunk. I’m going to show you that REAL Game Developers Conference experience.”

Unce, Unce, Unce. He makes techno beatboxing sounds with his mouth as he shimmies his way through the crowd and out the door. I follow at his heels for the rest of the night and soak it all in. Here’s what went down. Bear with me as I try and draw an accurate picture of what a night of Game Developers Conference party hopping is like.

Bar: 1 Drink ticket (per person) gets you one of following: a beer, glass of wine, or Rockstar energy drink

Notable Moment: Ran into Grimecraft, a DJ who remixes songs from video games. He tried to explain the genre “chip music” to me. 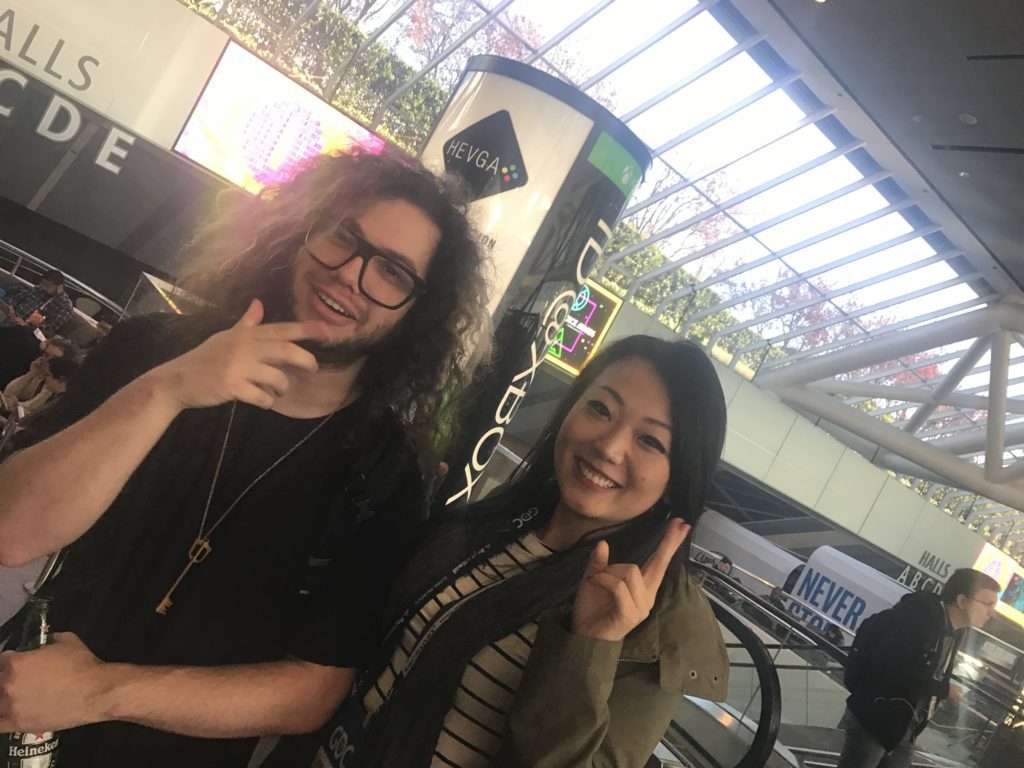 Food: It’s there if you want to buy it

Notable Moment: Frank explained to me that the bar/lounge at The W Hotel across the street from the Moscone Center was THE place where business went down at Game Developers Conference. “Everyone who is anyone comes to The W and at least has a couple drinks.” I teeter as I clutch my Vodka soda and reply hopefully, “Does that mean we’re somebodies?” Frank scoffs, “At least one of us is.” Fucking bastard.

Bar: Open for select draft beers on draft and wines, cash for liquor

Ambience: Retro-nerd – The whole upstairs was lined with pinball machines. Bowls of quarters were the centerpiece of every table, free for the partygoers to take and use to play the machines. 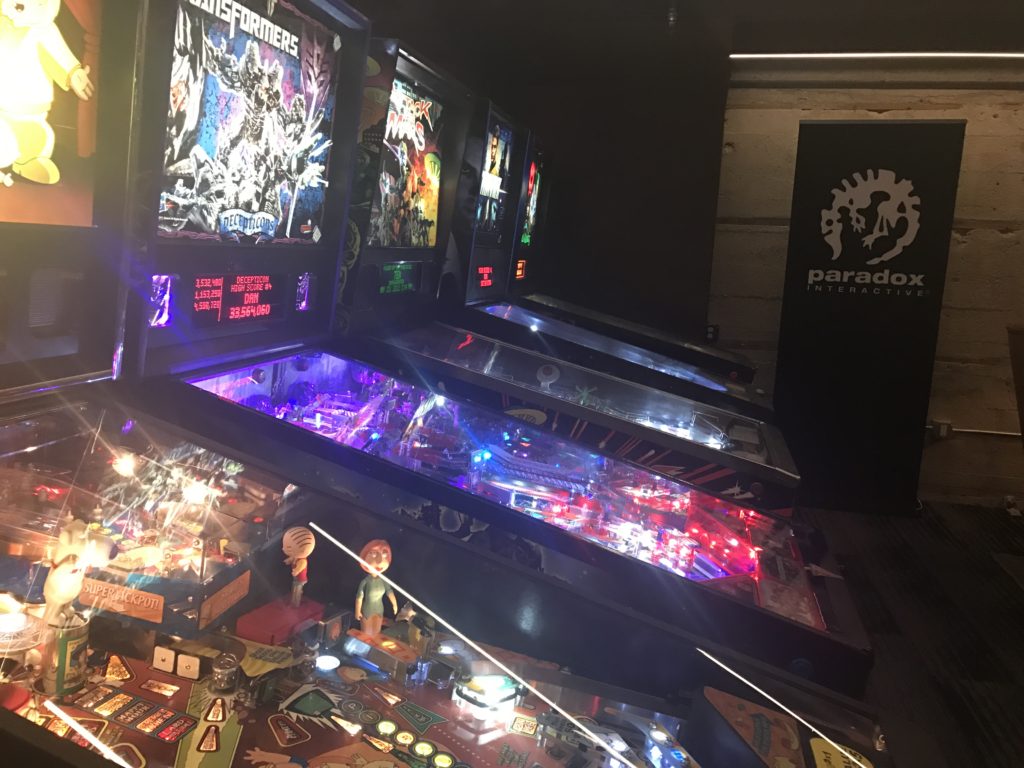 Notable Moments: Met Fred, the CEO of Paradox Interactive. He was handsome – very Aryan-looking — probably because of his Swedish heritage (Paradox is a Swedish company). We talked about scary movies and penis physics involved in Conan Exiles, an open world, survival PC game. After chatting for a while he leaves to go mingle, but not before casually throwing us an invitation to their karaoke party which was to take place later on in the night.

“Where is it? When?” we ask him as he dances away. He turns around, pantomimes a heavy shrug and walks into a crowd of blonde hair, perfect-looking test tube baby people. Damn what a boss. I mean, he literally is THE boss. Ha.

Food: Every food on a stick imaginable (my favorite was the chicken and waffles on a stick), fried things, sliders 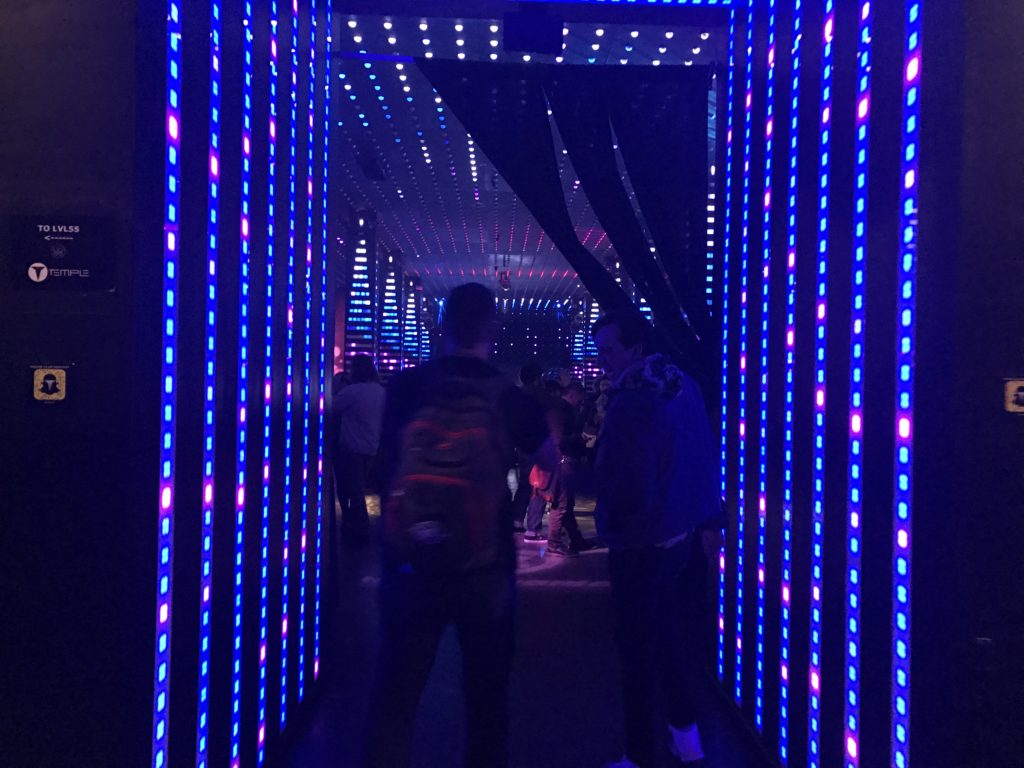 Notable Moments: The beginning of the party was AWKWARD. Maybe because I wasn’t drunk enough (yet). Maybe because the small talk that I struck up with various individuals always went something like this, “Yea I work for [insert big name gaming company now] on the developer side. But I used to just be in publishing. That’s when I worked for [insert another fancy gaming company].” 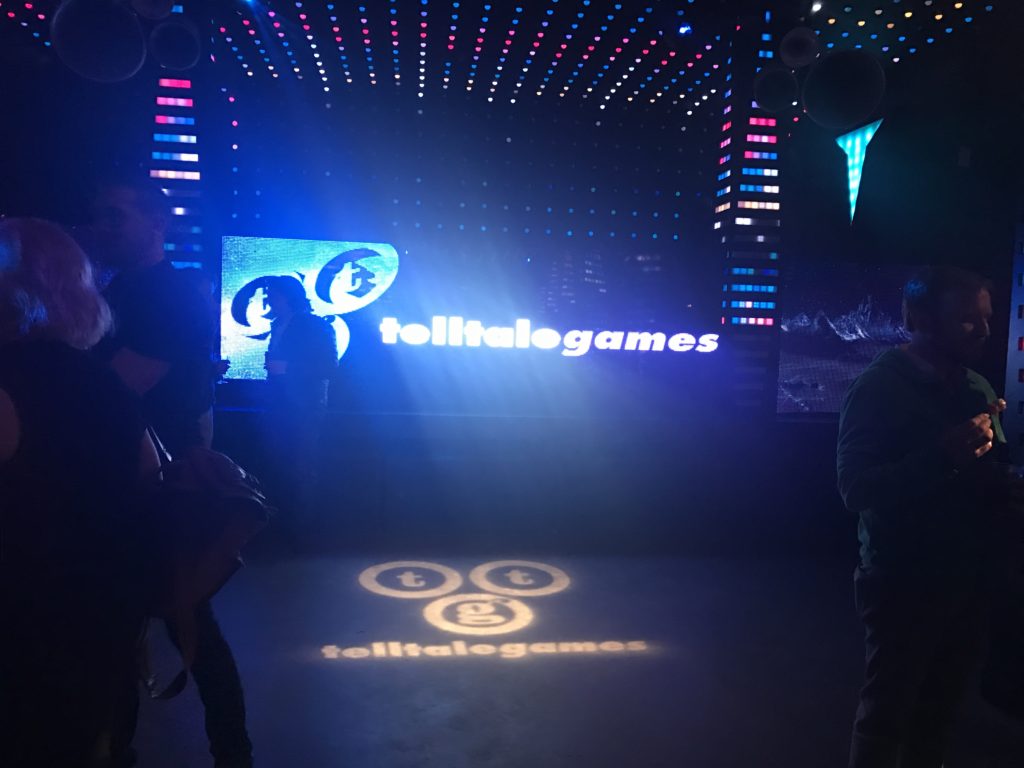 To which I always reply with a big grin and nod like, “Oh THAT company!” And then they ask some gaming related question that calls on my knowledge (or lack thereof) of how I feel about such and such doing so and so to which I reply again with a shit-eating grin, nod and bop to the music like a clueless lunatic. If anything I try to pretend like I don’t hear the question because the music is too loud, when in all actuality I have no clue how to answer it.

Towards the middle of the party, I bump into some writers from Destructoid, an online gaming publication. If you frequent Twitch.tv, then you’ve probably seen their “Mr. Destructoid” emote spammed in many channels. Maybe it was the booze, or maybe it was just the general affable demeanor of these writers, but I began to feel more at ease. Oh I know, it’s probably because it didn’t feel like a penis showing contest and the conversation followed a pleasant trajectory of whatever the fuck we felt like talking about. Whereas before, I felt like I had something to prove, but actually had nothing because you know, filthy casual gamer here— after meeting the Destructoid writers, it just felt like I was hanging out with cool peeps.

As the night winded down for me (around 10 p.m. because that’s my bedtime, shut the fuck up), I said my goodbyes and gracefully (not to be confused with drunkenly) bounced out of the club. Right before I reach the door, I brush shoulders with XAVIER WOODS! The WWE, New Day wrestler XAVIER WOODS. I lean over to tell Frank that Xavier looks like the type of guy who would appreciate giving someone (namely me) a surprise piggyback ride. As in, SURPRISE! I JUST JUMPED ON YOUR BACK BECAUSE I’M A HUGE FAN AND CAN WE BE FRIENDS PLEASSSEEEEEE??!!!! Frank tells me to calm down and settle for a picture. Xavier takes a picture with me and my first night of the Game Developers Conference is effectively made. 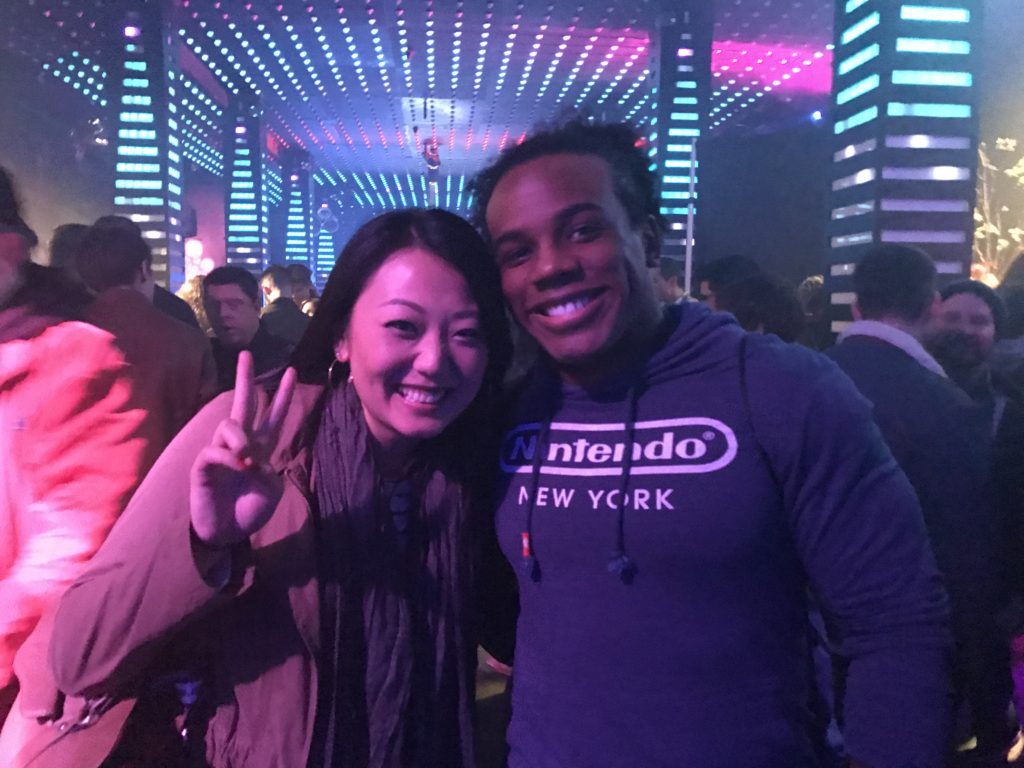 Dorkaholics Exclusive: Who Wore It Best...