Plot Recap: A tired, lost man, Takehiko, wanders into a town where everyone is wearing outdated Japanese clothing. It seems to be a time warp of some kind. He gets knocked over by a young girl wearing a silk red robe and wakes up with her moaning and squeaking on his cock. It’s unclear why she is on top of him. It is more unclear why she is moaning and squeaking. Miyazaki Maya Daizukan seems to suggest that it’s just what young girls do when you put them near a dick. I don’t know- that was my takeaway at least. He asks, “Who are you?” The girl thinks for a second and explains that she is a peasant girl by day and a cock slut by night. Takehiko doesn’t believe her and by God, he deserves the truth. Can you guess how he decides to extract the truth from her? That’s right. A good old pounding. But first, he ties her up. After he licks and fucks her he finds out that she is actually a Princess. Princess Tsubaki. Princess Tsubaki publicly refuses a marriage offer and proclaims that she has chosen Takehiko to be her new husband. I guess the sex was that good. 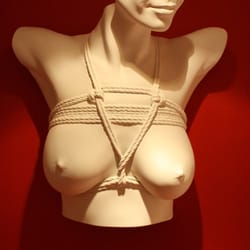 The Japanese art of rope bondage – shibari. As demonstrated in Miyazaki Maya Daizukan.

Moral of the Story: If a guy fucks a girl good enough— even if the intercourse was questionably non-consensual— the girl will fall in love with the boy and want to marry him.

Review: The plot for episode 1 of Miyazaki Maya Daizukan gets an 8/10. It was easy to follow and relatable. As a girl, I think the idea of being a princess and fucking a time traveling guy is pretty hot. The fact that the time traveler just has his way with the girl without REALLY asking for her permission is arguably hotter. Yes, it’s rapey, but sit the fuck down social justice warriors, because it’s a fantasy. The sex gets a 6/10. Since the actual sex organs and intercourse are pixelated, the hentai leaves a lot to the imagination. And I don’t have that much of one. I’m like a dude in the fact that I’m more visual. I like to SEE what’s going down. P going in the V, the A, the M (that’s vagina, ass, and mouth respectively). I would’ve also like to see more positions. A little girl on top maybe? Doggy perhaps? But no, just mish. YAWN. I did like the fact that the girl was tied up Japanese bondage style. There’s something super erotic about a girl’s boobs being tied off from the rest of her body with ropes. I wish my boobs were big enough for someone to do that to me. Maybe they are. Be right back. Going to look for some rope and a time traveler.

Emergency Declaration: Takes Flight and Brings Audiences to the Edge of Their Seats