Robin 80th Anniversary 100-page Super Spectacular #1 is a collection of 10 short stories revolving around the history of Robin by some of the most important creative names in the industry.

As the first and original Robin, Dick Grayson is the main character in four of these Robin 80th Anniversary stories and also makes a brief appearance in the fifth one. Again, since he was the initial Robin, it’s also his 80th anniversary we are celebrating. 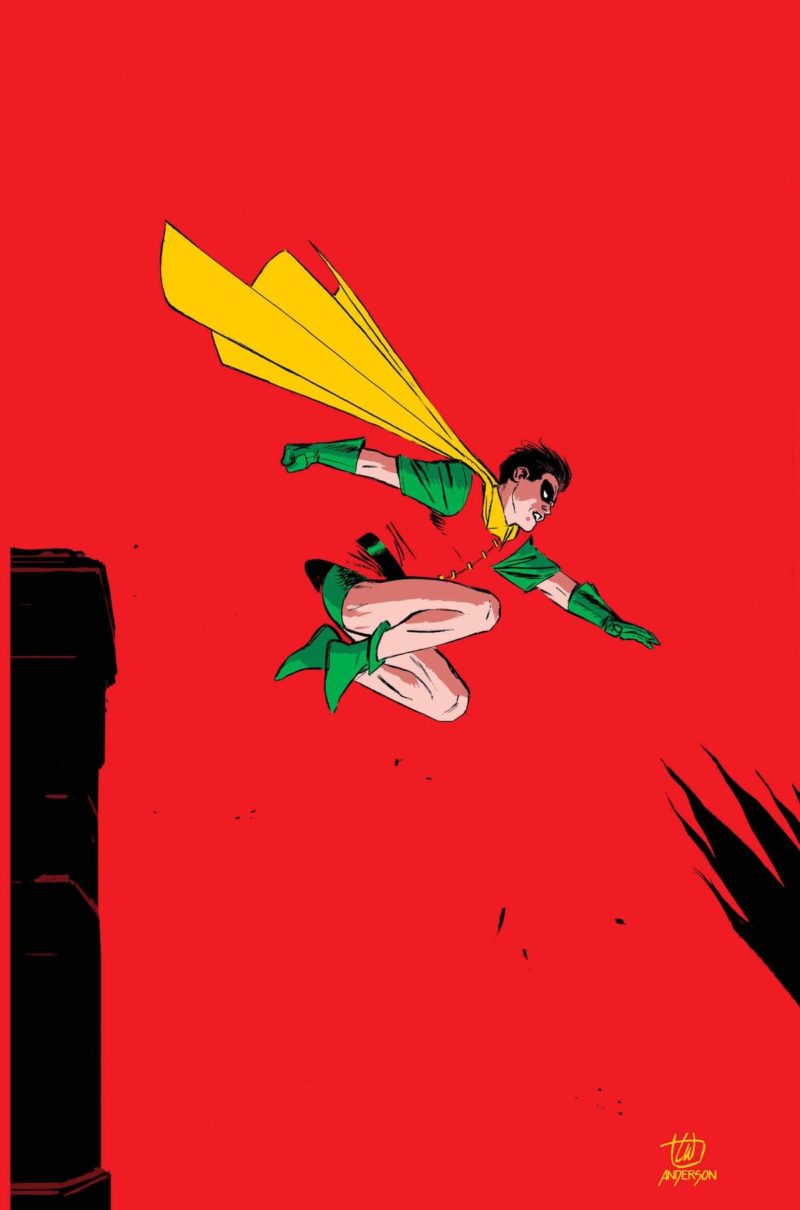 Dick Grayson, Robin I in “A Little Nudge”

The first story of Robin 80th Anniversary, “A Little Nudge,” by Nightwing creator Marv Wolfman is about an iconic moment that has been told time and time again, with subtle changes here and there. What stands out the most to me in this rendition of Dick leaving is that by the end, it is revealed that Bruce is not the overbearing and controlling person Dick imagined him to be. The truth is that Bruce was aware there was a day Dick would move on from being Batman’s partner and he didn’t want Dick to just stick around for his own benefit. So as any loving person would do in this scenario, he gives him “a little nudge” to leave the nest.

What Marv Wolfman also does well is keep a cool head on Dick’s shoulders. Throughout this difficult moment for him, he keeps the conversation balanced with an appreciation for what Bruce has done for him. 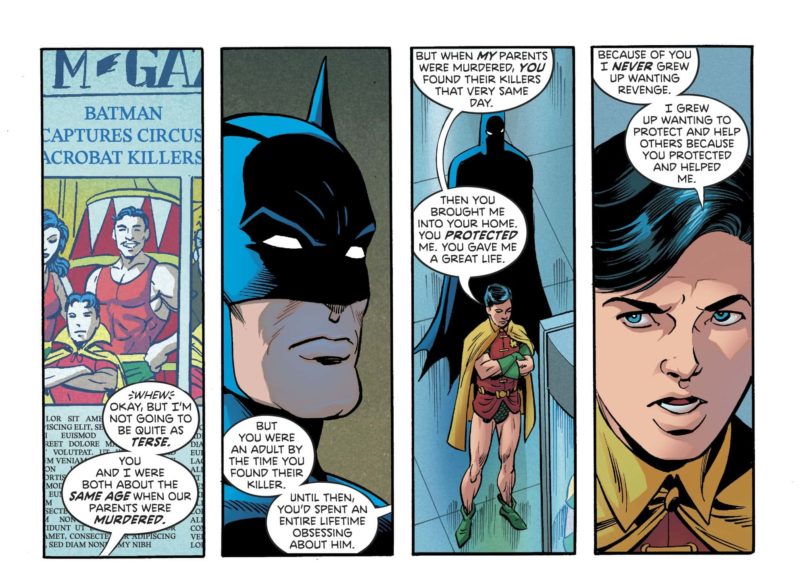 Nightwing & The Titans in “Team Building”

The third story about the adult Titans versus H.I.V.E. ends with Dick giving advice to Damien Darhk, who he watched bully and intimidate his henchman, in a way that is the exact opposite of the trusting leadership style of Dick.

“Fear of execution isn’t a great motivator. I’ve found basic team-building and morale-boosting to be much more effective.”

“The Lesson Plan” highlights Dick’s spy days as Agent 37 with Spyral and his special mentoring of a young female spy-in-training. Utilizing flashbacks to lessons that Batman imparted on young Dick, in the present day he is more or less giving the exact opposite advice, which really drills in the idea that Dick was right to leave Batman’s side in order to truly embrace who he is as a person. However, by the final lesson, Dick echoes Bruce’s exact word in a slight twist that warms your heart knowing that Bruce and Dick have always understood each other –

“Ignore your mentor. Do what you do best. Be you.”

The single Jason Todd story takes place after he’s come back from the grave and is intercut with flashbacks to his younger days as Robin, giving an incomplete birthday gift to Bruce. In the present day, he’s found the Batmobile and leaves the completed gift for Batman. The art features watercolors by colorist John Kalisz and artist Dustin Nguyen which really fits the sentimentality of this story. The title is “More Time,” a reference to the gift being Bruce’s father’s watch, but I can’t help but hope that it also refers to Jason and Bruce just needing more time to repair their relationship. The Red Hood might get a lot of attention for being the outlaw of the Bat-family, but it’s the sweeter, tender moments of forgiveness and vulnerability that I’m drawn to.

In the first Tim Drake story, “Extra Credit,” Tim meets with his new high school guidance counselor, who is concerned about Tim’s lack of extracurriculars despite having top-performing marks in his classes. While this counselor is offering suggestions such as athletics and volunteering, Tim is actually thinking about his own secret extracurriculars fighting crime with Batman and the Teen Titans.

By the end of this meeting, Tim finds himself running out of the office to meet up with Batman. The bewildered guidance counselor voices over, “There’re a lot of layers to that kid, I just know it. A ton of possibility. A ton of potential. I hope Tim is aware of it. A kid like that… I just hope he makes something of himself.”

What stands out to me about this story is how much I relate to Tim Drake. I recently went through my high school yearbook and reminisced on how my peers and teachers had such high hopes for me after graduation. Knowing what other people thought about really embedded this mentality for me to never “peak in high school” and not be someone that stopped growing. 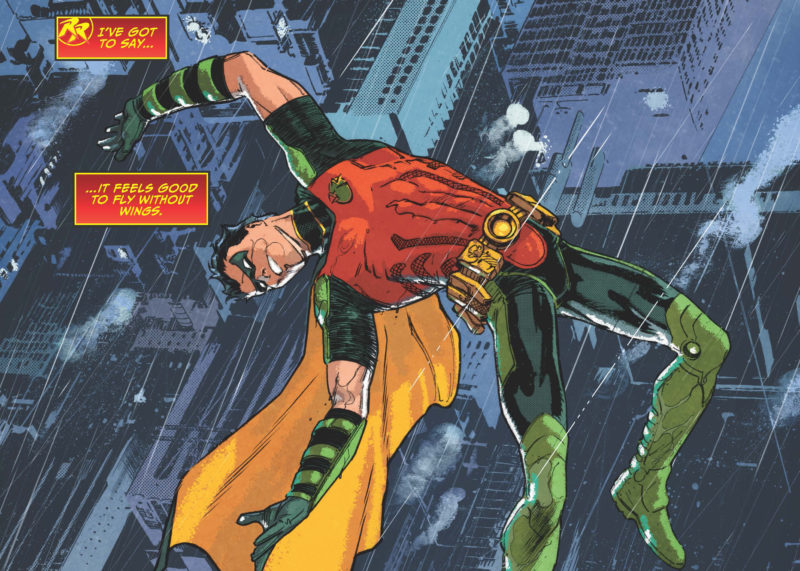 The second Tim Drake story takes place right before Detective Comics: Rebirth begins. While Batman has invited Tim Drake back, he isn’t sure of how to respond. He is also considering a university acceptance. To help him make a decision, he goes to each of his brothers – Dick, Jason, and Damian – for their input.

This is where we get Dick’s 5th appearance. When Tim asks him what he’s supposed to be in a few years, Dick tells him to be a role model for the next generation of young heroes that are bound to pop up. There’s no better person than Dick to say these words, as he has been and still carries that role in the DC Universe. “That’s Dick for you. Grinning as he offers you the role that everyone and their brother knows belongs to him. He was the first. He’s the best. He’s always going to be the role model.”

Afterward, Red Robin meets up with his badass brother, the Red Hood, who shares his perspective on what the relationship with Batman is supposed to be: “Now we get to strip away everything we think didn’t work and do it our own way, having learned from the best. Our responsibility is to be better than him. To provide the ways in which he failed, not just us, but the people he’s trying to protect.”

That line by Jason is a perfect throwback to Batman & Robin Eternal #22, co-written by Scott Snyder and James Tynion IV, who is the writer behind this short story. In #22, Damian tells his adoptive brothers about a training day in the Batcave with their father, who addressed Damian’s concerns about not receiving the necessary to become a perfect soldier if it’s the same training that the former Robins have gone through.

“I’ve never made a soldier. I don’t want to. Dick? A clearer vision of what Batman was meant to be. Jason is willing to do what Batman can’t, when the world needs it. Tim has a strategic sense I envy. I’ve never seen him move too early. Sometimes you do. But that might save you someday. I want you to decide for yourselves what you do– who you become… I want you to become Robins. To trust yourselves. To know someone believes in you. My job isn’t to train you to make the same decisions I’d make. My job is to catch you, until you decide for yourself.”

Tim’s encounter with Damian is kept short and sweet – “You do anything you damn well please.” Good job, prince of darkness. Damian reminds Tim that there is never a clear path for him to take, even in the beginning when he became Robin. Tim wasn’t recruited, he saw Batman needed help and stepped up to take the job, forging his own path, which is what he needs to do now. The story ends with Bruce and Tim discussing the beginning of the Gotham Knights Protocol, which would kick off in Detective Comics #934, making this story a prequel of sorts. 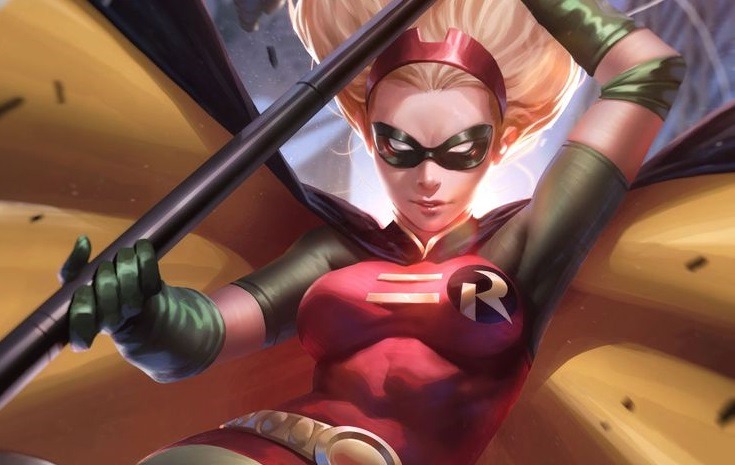 Stephanie Brown’s tenure as a Robin is recognized in the current DC canon as Amy Wolfram takes us back to her first day with a new suit Robin designed for her. It’s an action-packed story featuring Batman and her going up against Firefly. Beyond that, it’s about Batman realizing he needs to give Stephanie space to become the Robin she is meant to be, not just compare her to her predecessor Tim, who honestly not many people can compare to right off the bat. And while he notes she needs to learn to better control her impulsiveness (lest she becomes another dead Robin like Jason Todd), he signifies his acceptance of her by designating space within the Batcave as hers to feel more at home. 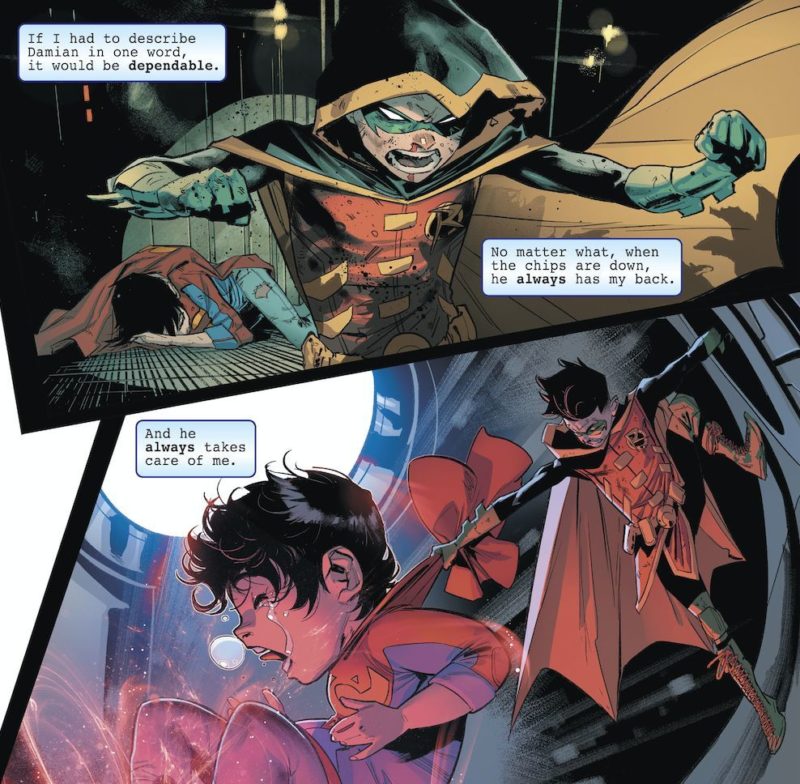 There are two additional stories featuring Damian Wayne. The first is told by Jonathan Kent’s perspective showing how the son of Superman views being best friends with the son of Batman. The second is a story about Damian Wayne being distant from his father because of a secret he is carrying that unfolds in the pages of the current Teen Titans comics, while Bruce wishes Damian would open up to him more and trust him. These two stories could not be any more opposite, yet somehow appropriate. With Jonathan Kent, it’s a wholesome sweet story told through a paper Jonathan is writing for school – which really supports the idea that during childhood there are no greater bonds than between friends. And at the same time, it’s only natural for someone Damian’s age to be at odds with his father.

The fact there have been a number of different Robins, each so unique in what they have to offer shows that this isn’t a one-type-fits-all type of identity. But at the same time, the significance in this role called Robin is one that is looked at as a role model, a leader, someone who carries a certain weight that balances out Batman perfectly. The 10 stories that make up Robin 80th Anniversary take us across different points in time during these characters’ lives in order to illustrate the vast depth of their personalities. By the end of Robin 80th Anniversary, I find myself asking a question I often debate myself over: Do I want to have a Robin or do I want to be Robin?

Purchase your own copy here.

Crossover from the Planet of the...