DC Comics Co-Publishers Dan DiDio and Jim Lee provided important news about the current state of the DC Universe during the opening day of this year’s San Diego Comic-Con.

“It’s been a pretty exciting year for us at DC Comics. We got a lot of great stuff going on in the DC Universe,” DiDio said. “I don’t know if you heard this or not but we made multiple changes to the way we put books out. I know a lot of people are Vertigo fans. I just want to be clear that the fact that the imprint might go away doesn’t matter — what’s in the books is what matters. What we need to do is give you a destination that makes the most sense. We have a great name — DC Comics. It makes the most sense to us to put everything under that name.”

“What’s interesting is that so much of the core Vertigo talent is writing main DC books. That line was blurred, there was less distinction and less of a need for distinction,” Lee said.

In regards to MAD Magazine, “It was a tough choice for us to move it off the newsstand. There’ll still be new material, probably not as much. It still exists, it’s still out there, hopefully, we’ll be able to rebuild these great brands someday,” said DiDio. Then he brought up Year of the Villain, saying how fans love those characters. “In some cases, they become more popular than the heroes. We have so many great creators with unique visions working on the line, Snyder on Justice League, Bendis on Superman, I know these books are in good hands. Scott has this great story with The Batman Who Laughs. It’s like lightning in a bottle. Between the stories you see with Year of the Villain, and with City of Bane. Then we’ve got Bendis starting Event Leviathan. We asked him to examine all the agencies we had in the DCU and cull them down a bit. We expect those problems to make them out to the rest of the DCU, too. From my standpoint, what you’re starting to see is years of planning.” 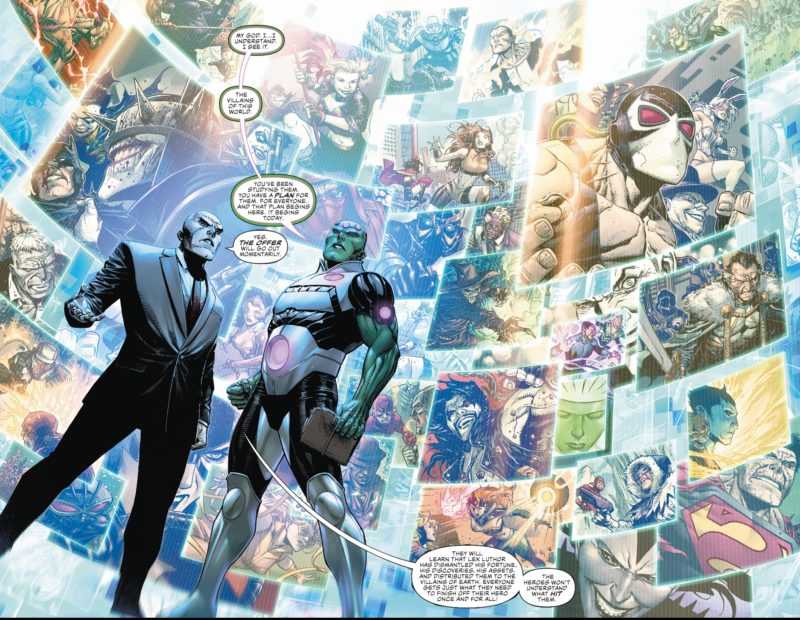 Lex Luthor has had his eyes on his fellow villains in preparation of this Year of the Villain. Photo: DC Comics

“We got Bendis from another company,” Lee said. “We’re really excited he’s working on Event Leviathan. He’s also tying that into the Lois Lane maxiseries. They really wanted to tie into all the investigators, the greatest detectives in the DCU. On the Legion side, I’m really happy to be joining Brian on Legion of Super-Heroes. It’s a short chapter, sort of like Action Comics #1000, and I’m kind of the lead-off artist on this.”

“We also have Snyder and Capullo on Batman: Last Knight on Earth. It captures all the insanity Scott and Greg bring to this character,” DiDio said before speaking on the pop-up imprints. “We got Bendis working on Wonder Comics, which is a flavor that’s not being fed across the line. We’re introducing Hill House Comics, and here to speak about that is Joe Hill.”

Hill entered the stage to join the Co-Publishers on stage and DiDio asked him why he wanted to do something this ambitious.

“There’s always good things happening in horror comics. But I’m greedy and I always want more. We have five titles and they start coming out in October.” Hill said before sharing the cover art for the titles in Hill House Comics. “There’s also gonna be a backup feature in each one of these called Sea Dogs about how werewolves helped us win the Revolutionary War.”

Returning to the topic of imprints as a whole, Lee said, “We kind of have the best of both worlds. We have brand equity in DC and it allows us to market each pop-up differently. You need to hand-sell these.”

DiDio added, “The fun part is when other creators see this, they want to get involved.” He then steered the conversation towards DC’s young adult books, “Earlier this year, we introduced a series targeted toward young adults and middle-grade readers.”

“Dan’s point is, it’s a different audience. We recognize for us to continue to grow our business, we have to find younger readers. It’s really gratifying to see the support and the sales its been garnering,” Lee said. 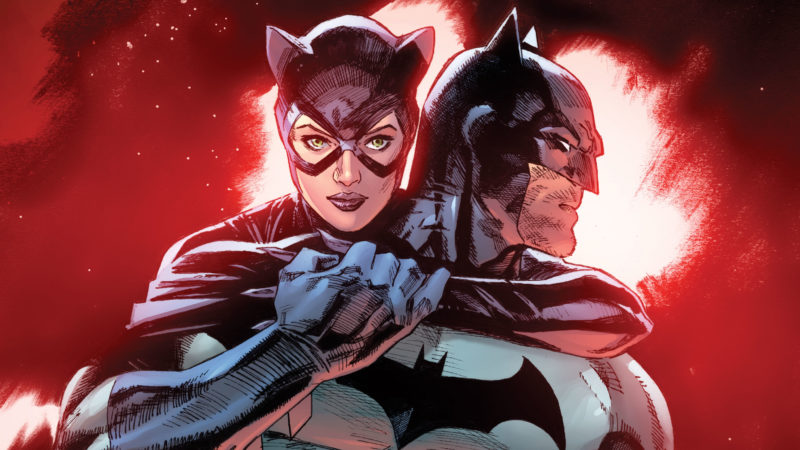 Beginning in January 2020, DC’s BATMAN comic, will return to a monthly schedule alongside a new 12-issue BATMAN/CATWOMAN series by Tom King and Clay Mann.

DC’s line of Wal-Mart titles the next topic to discuss. “We wanted to create books that were more accessible for casual fans,” DiDio said. “We gotta find ways to bring people in — through these young adult imprints, through Wal-Mart. What we see in the marketplace is a little unsettling. We want to build worlds, we want to build universes. It also seems like some people are more interested in the older stuff than they are for newer stuff. That’s a failure on our part. The only way we can do that is by keeping people excited.”

The streaming platform DC Universe was mentioned with DiDio saying, “We do understand the global reach of our product. It’s intriguing for us to hear the interest from around the world. If we grow ourselves as much as we can in the U.S. and need to grow more, that’s when we expand.”

When DiDio asked the crowd what from DC Comics has them excited and a fan responded Doomsday Clock. “I can’t argue it’s moving a little slow. The nuances, the art, the complexities, it’s taking it longer to create. Clearly, though, there are elements that will affect the DCU in a big way. You’ll see the long ramifications throughout 2020,” DiDio admitted.

“We do,” DiDio said. “Naomi was lightning in a bottle. It’s achieving every goal we set for it. She’ll be appearing in Superman, Action Comics, and for Young Justice, he has big plans for that.”

Three Jokers was mentioned by the next fan.

“There’s no reason to rush it,” Lee said.

“They’re about 2 and a half Jokers in,” DiDio joked.

The conversation became a Q&A with a fan who asked what Lee and DiDio would recommend to new readers.

“Batman: Year One,” Lee said. “No, I don’t think there’s one answer that works, but Batman: Year One is great. We’ve explored a lot of the characters and what makes them special, so it comes down to your own taste.”

For the final question, a fan asked about a new Who’s Who.

“One of the things we’re working on in the DCU is we’re building an ultimate timeline. We’re building this so we have a better idea where our stories connect. That’s where we made our mistake during the New 52 — we didn’t understand which stories matter, which ones didn’t. Once we understand how these characters connect, then we’ll be in a place to give you the true history of the DCU,” DiDio answered.

DC Comics: Dark Crisis Will Be...