Fans of Arrow have gone on a long journey with the main character Oliver Queen from leaving the island of Lian Yu (Mandarin for Purgatory), returning home to Starling City, and becoming the hero “this city deserves.”  The final season of Arrow will not only coincide with the highly anticipated “Crisis on Infinite Earths” crossover event with the other CW shows but allow fan-favorite characters from throughout the last seven seasons to return. Two Asian cast members to be excited for are Rila Fukushima and Byron Mann.

Tatsu, also known as Katana in the comics, already made her reappearance earlier this month in this season’s second episode, Welcome to Hong Kong. The title of that episode pays homage to when Oliver first met Tatsu in Hong Kong when he was working for A.R.G.U.S., shown in the flashbacks of season 3.

Both she and her husband, Maseo Yamashiro, trained and mentored Oliver in Hong Kong. She later helped Oliver fight the League of Assassins and save his sister Thea Queen. 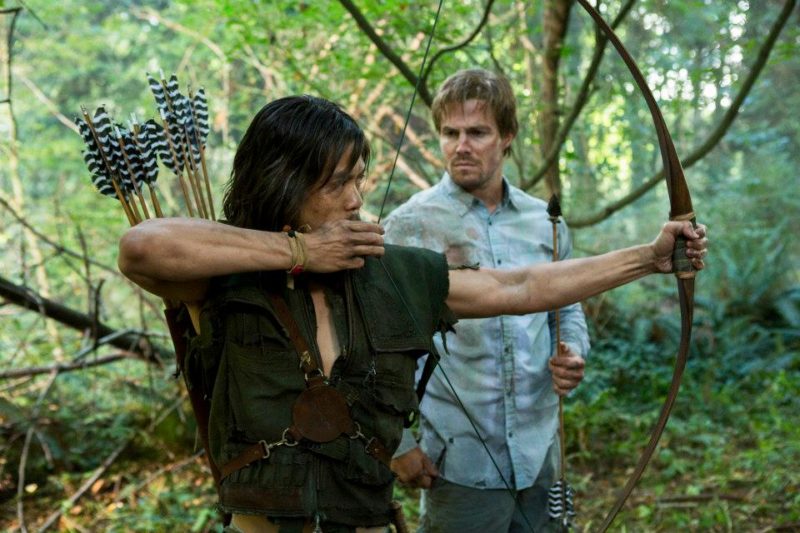 To become the iconic vigilante hero of a city requires training, which implies mentorship. The first mentor Arrow introduced fans to was Yao Fei Gulong. An aloof, disheveled man inhabiting Lian Yu before Oliver washed up on that island.

As the first mentor of the future Green Arrow, Yao Fei laid the foundation for what Oliver would become known for –  archery, killer instincts, and the ability to continue on surviving. The green hood Oliver would don as the Arrow is in honor of Yao Fei, as he had worn one himself.

It has not been announced yet which episode Byron Mann will be returning for, but given his character’s current deceased status on Earth-1, some form of space-time-travel will likely be involved. The first episode of this season took place to Earth-2, and the second episode was set in Hong Kong. Maybe Oliver needs to pay a visit to Lian Yu or China pre-Arrow season 1.

For fans that have watched the action-packed Netflix series, Wu Assassins, Byron Mann appears on that show as Uncle Six. He is the leader of the Triad, and he kills everyone who challenges his authority. Combined with his flawless martial arts skills, his supernatural abilities are a match for no one other than the Wu Assassin.

With only 10 episodes for the eighth and final season of Arrow, the effort put in to revisit fan favorite characters like Tatsu and Yao Fei is admirable on the showrunners’ part.

Producer Greg Berlanti has played a pivotal role in pushing for much-needed representation in mainstream media, through his involvement with the slate of superhero shows on The CW.

In an interview with Deadline, he explains the process:

“We wanted the worlds of the stories we were telling to reflect our world—just as we do for a lot of our shows, even the ones that don’t have capes. We want the stories to feel, as much as possible, like they are taking place in a world that we all live in. The effort was to make sure the shows themselves were diverse and then, out of that, there has always been the conversation.”

The Batman Who Laughs Gets a 7th Issue

The Sandman: One of Netflix’s Best Adaptations