Superman Smashes the Klan takes place in the mid-1940s, paying homage to the era of radio shows and specifically The Adventures of Superman series that played a role in trivializing the Ku Klux Klan with its “Clan of the Fiery Cross” storyline. The Anti-Defamation League (ADL) reached out to the show producers and suggested that the Man of Steel take on the KKK, which they were more than happy to agree to as they were looking for new villains. For this, the radio show was called “the first children’s program to develop a social consciousness.”

The story begins with Superman battling against Atom Man, a self-proclaimed “Avenger of the Master Race – Made by Nazi Science.” But behind that Nazi science is actually Kryptonite on his chest, which initially made me believe he was an analog to Metallo. However,  a quick Google search revealed the Atom Man is a historic character from the Golden Age. 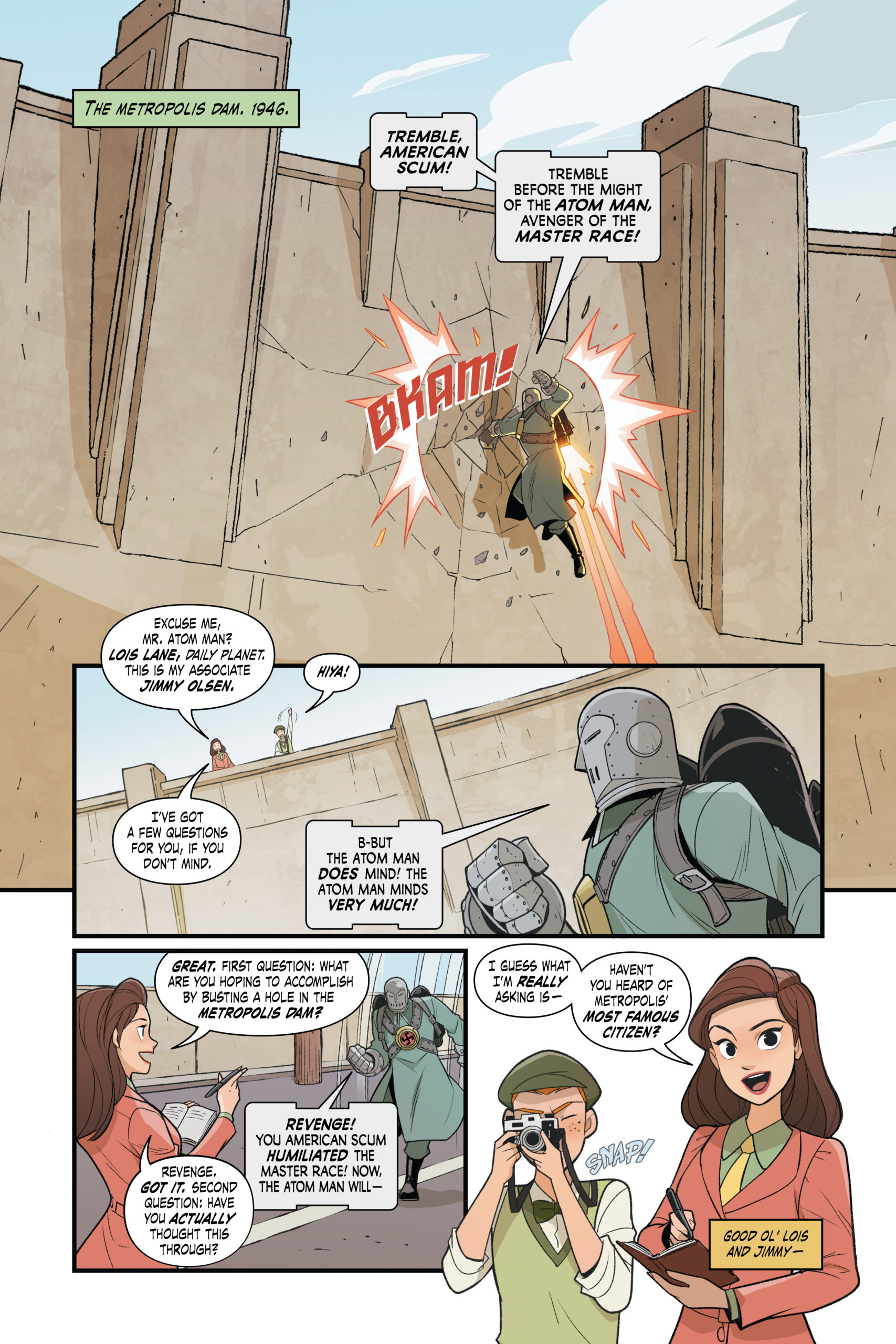 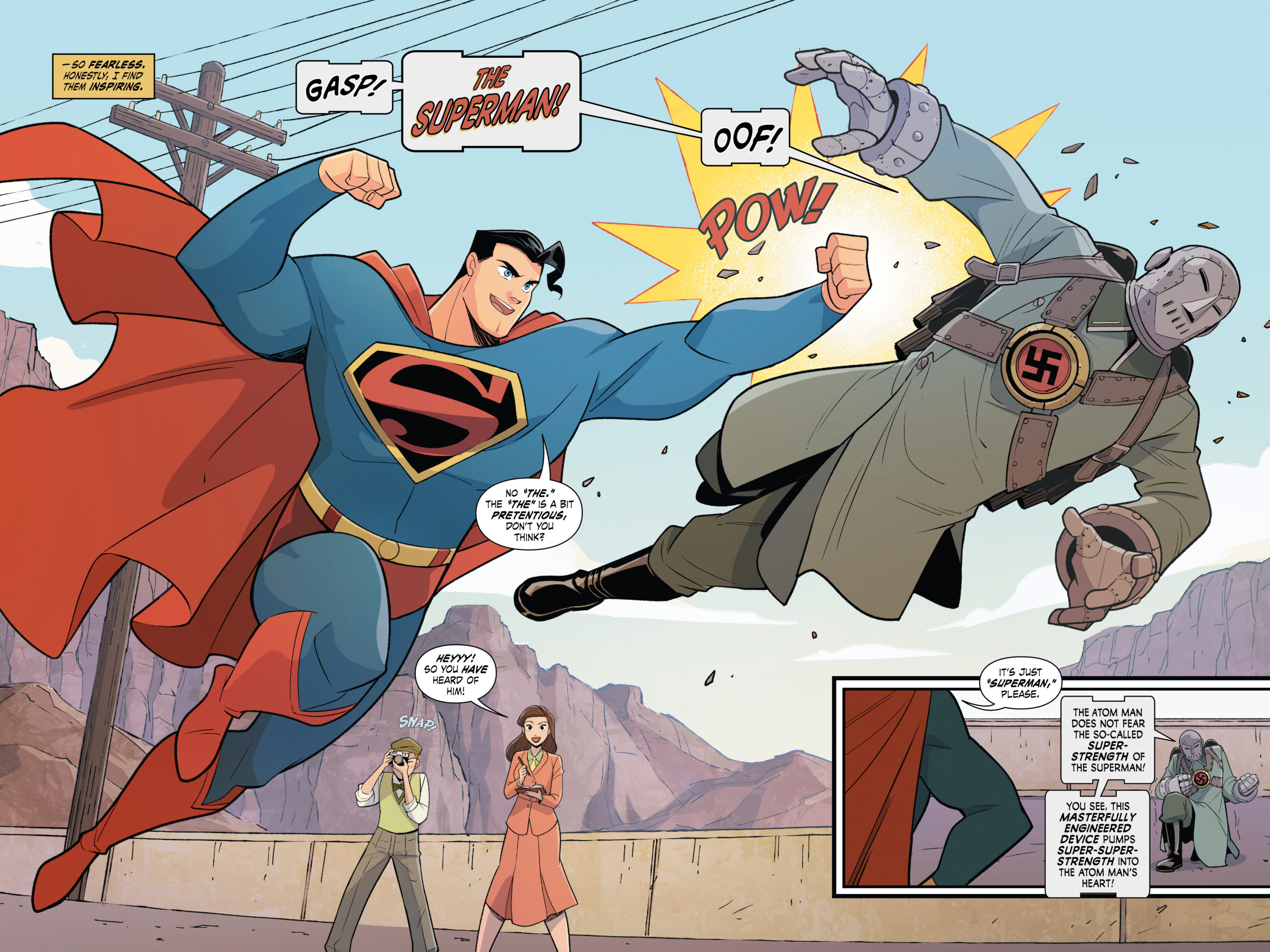 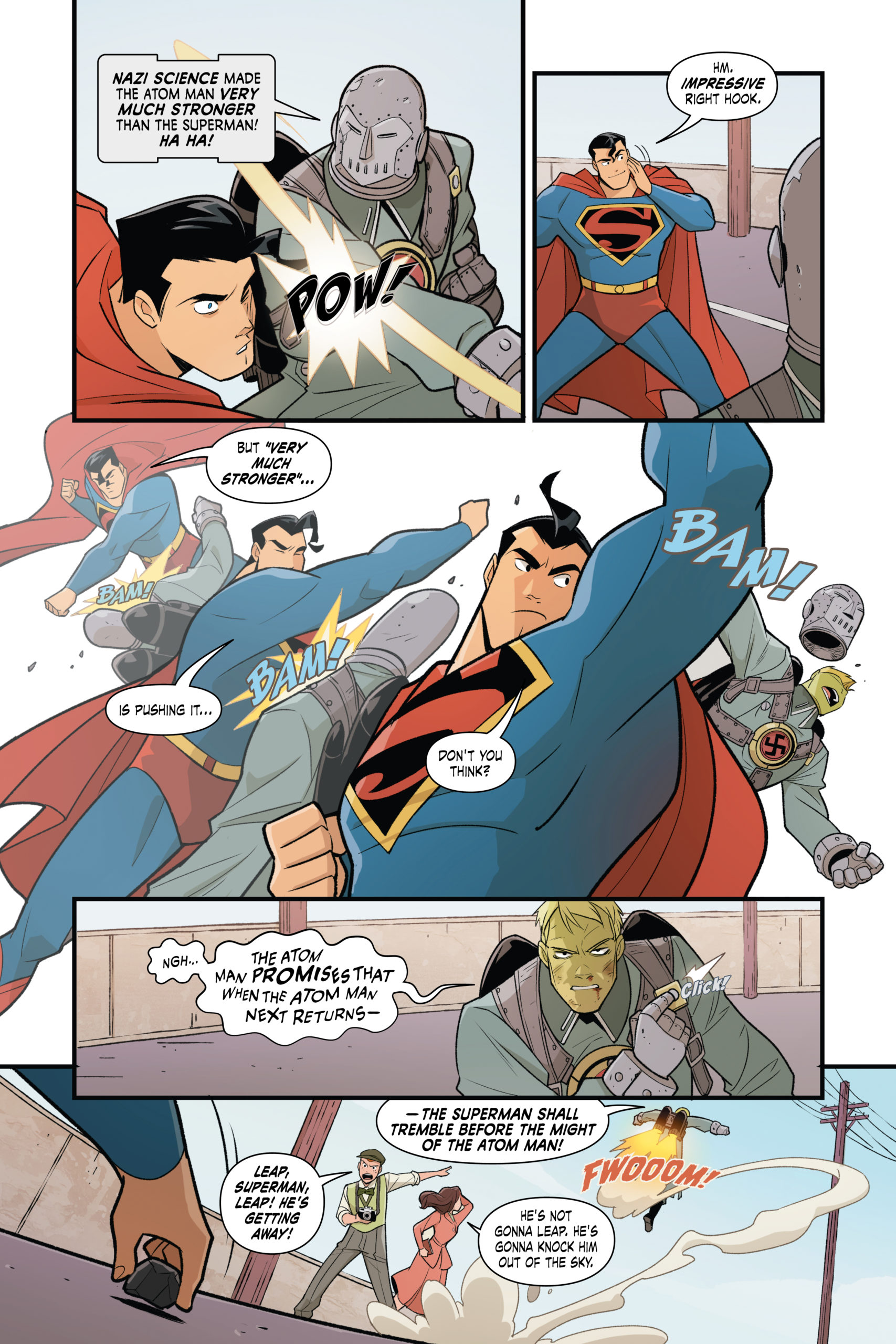 Soon we are introduced to our other main characters, Tommy and Roberta Lee who are moving to Metropolis from Chinatown as their father has recently been hired by the city’s Health Department. They are given a warm welcome by Dr. Lee’s new coworker and boss. It’s here that we see that racism isn’t just a trait found in supervillains, but something that exists even in everyday conversation. When Mrs. Lee thanks the men for the apple pie, Dr. Jennings apologizes that it’s not dog.

The kids meet their new neighbor across the street, Jimmy Olsen, who shows them around. When they get to the baseball field, Tommy impresses everyone with his pitching. However, the former star pitcher Chuck Riggs doesn’t take too kindly to this and starts making his feelings known, calling Tommy “ching-chong.” 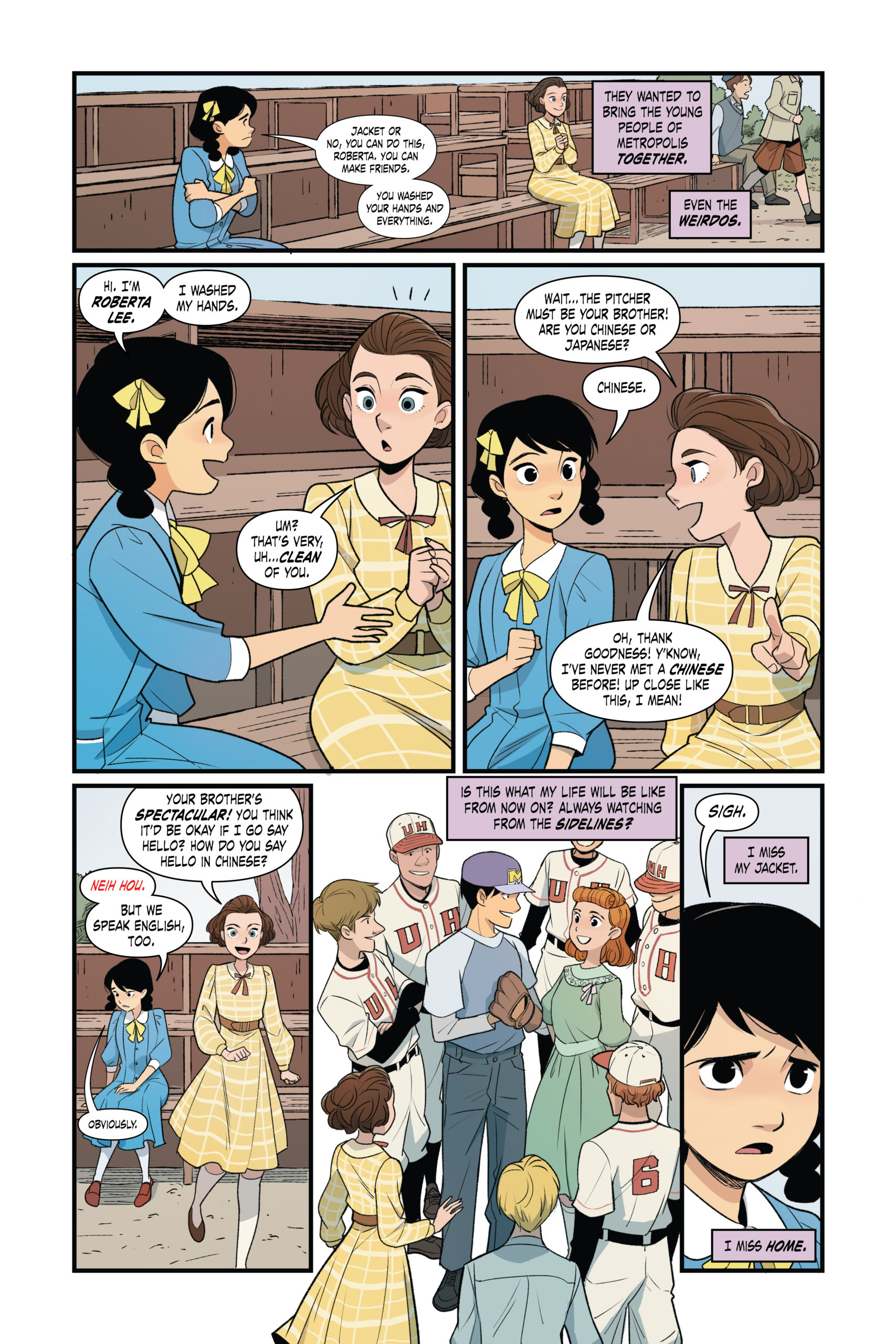 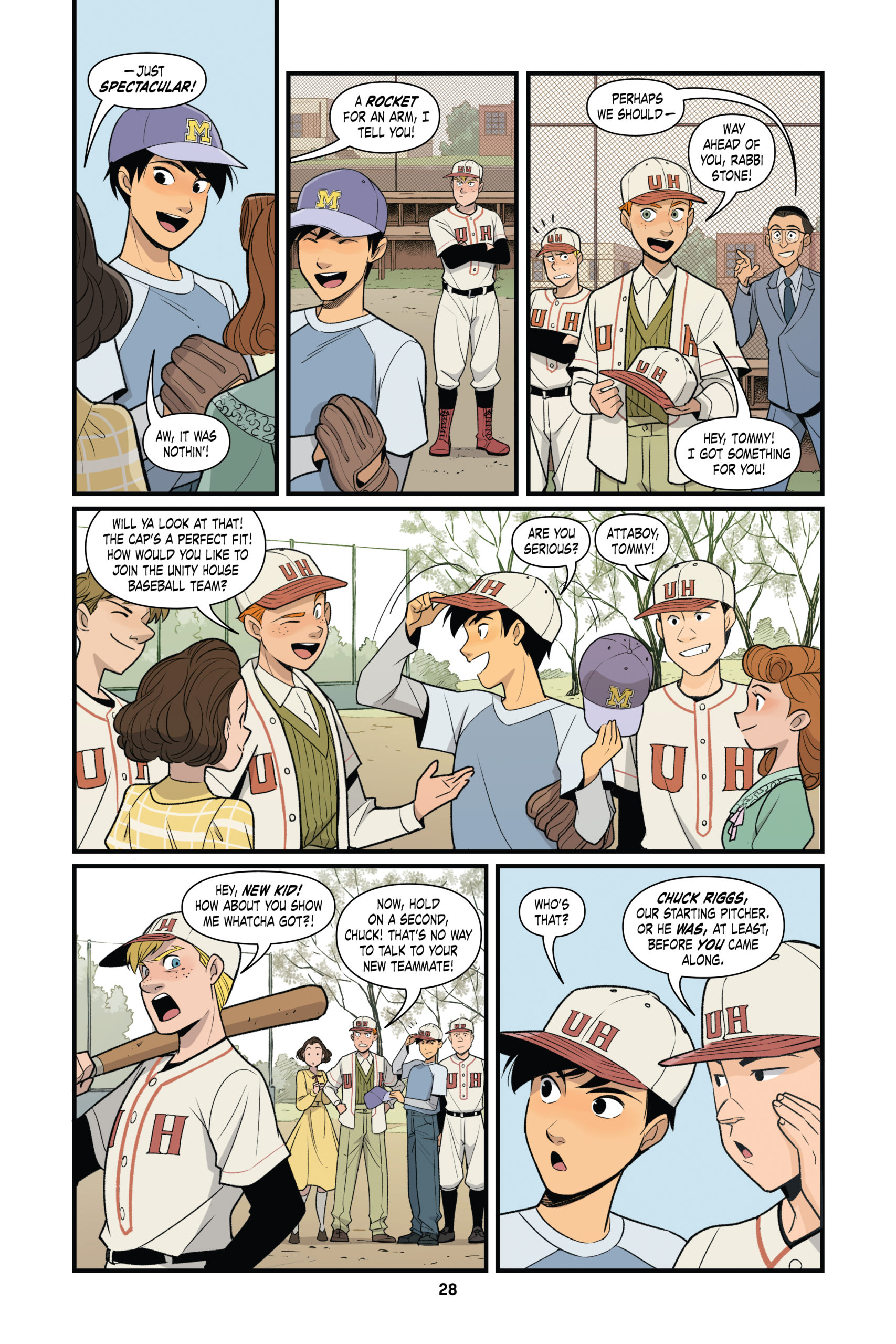 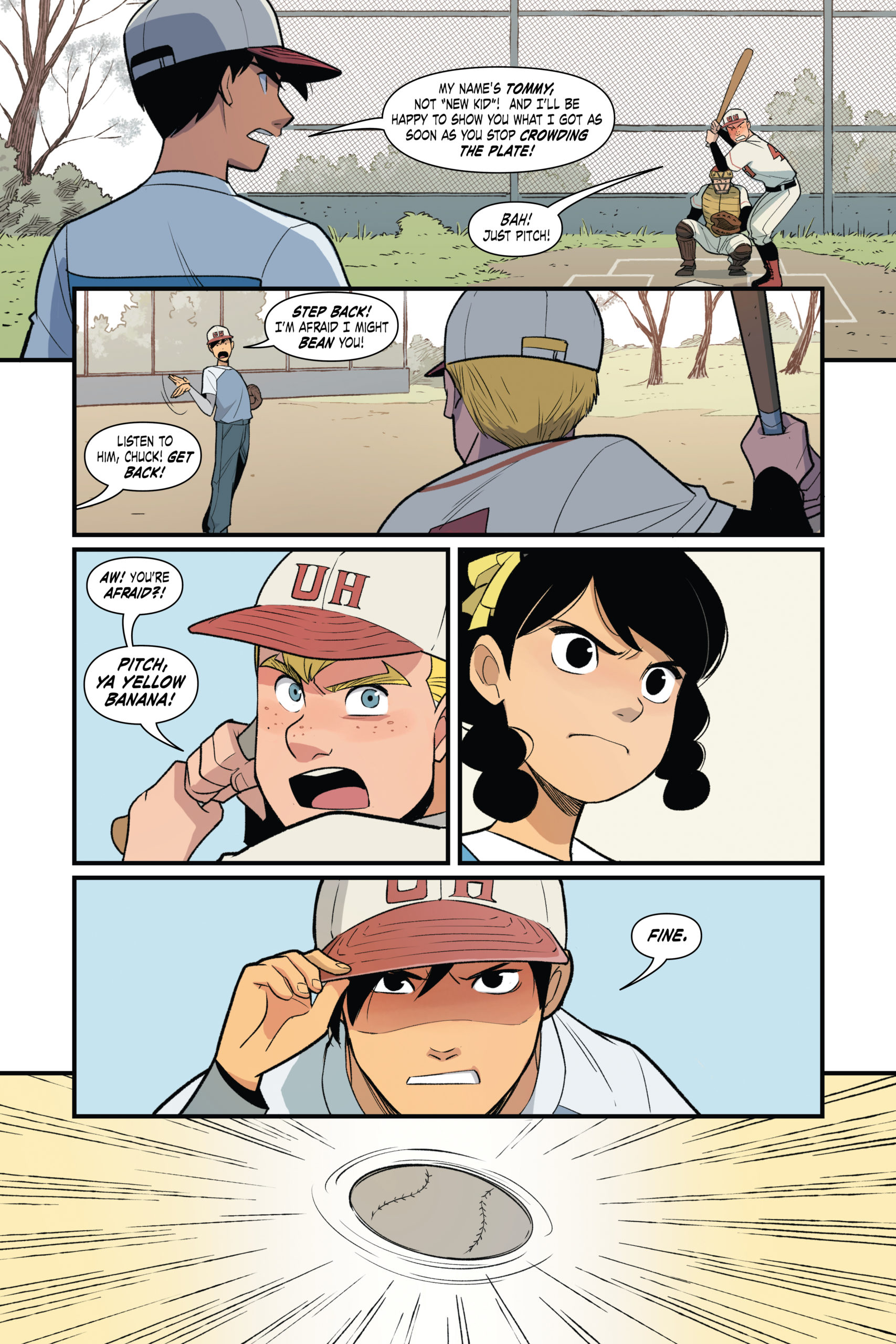 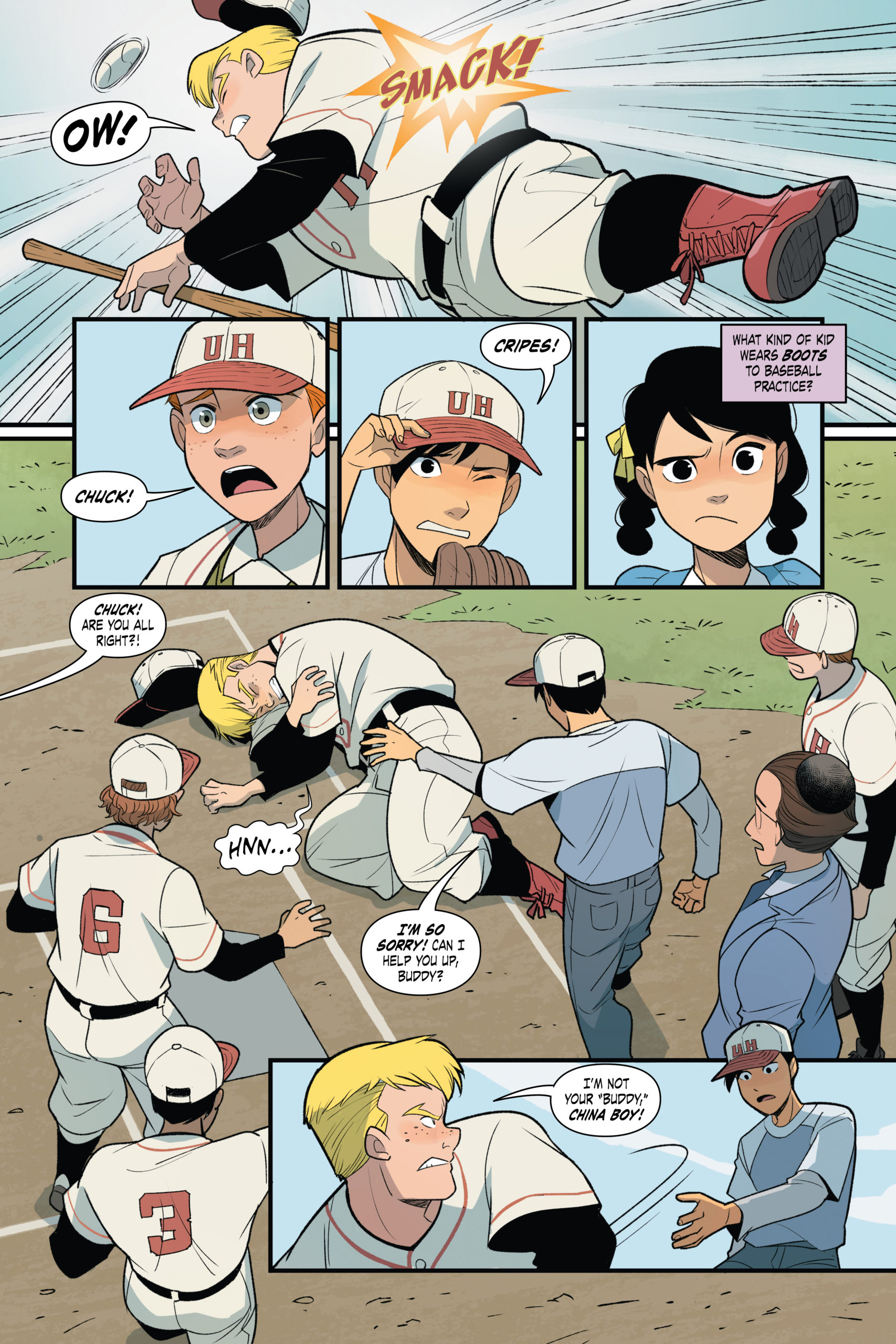 During this time, Superman is experiencing hallucinations which he believes to be a result of his exposure to the strange green rock from his earlier encounter with Atom Man. But he is able to ignore his ailment by focusing on helping others as his Pa taught him.

“Pa always said, minding yourself too much is a good way to lose your mind. Time for me to mind someone else.” – Pa Kent

Superman Smashes the Klan progresses with the Lee family being threatened by the local Klansmen of Metropolis, and the good people of the city doing their part to stand up against the Klan. I don’t want to spoil anymore because there’s only so much I can reveal for this 3-part miniseries and still allow you to enjoy the book for yourself. 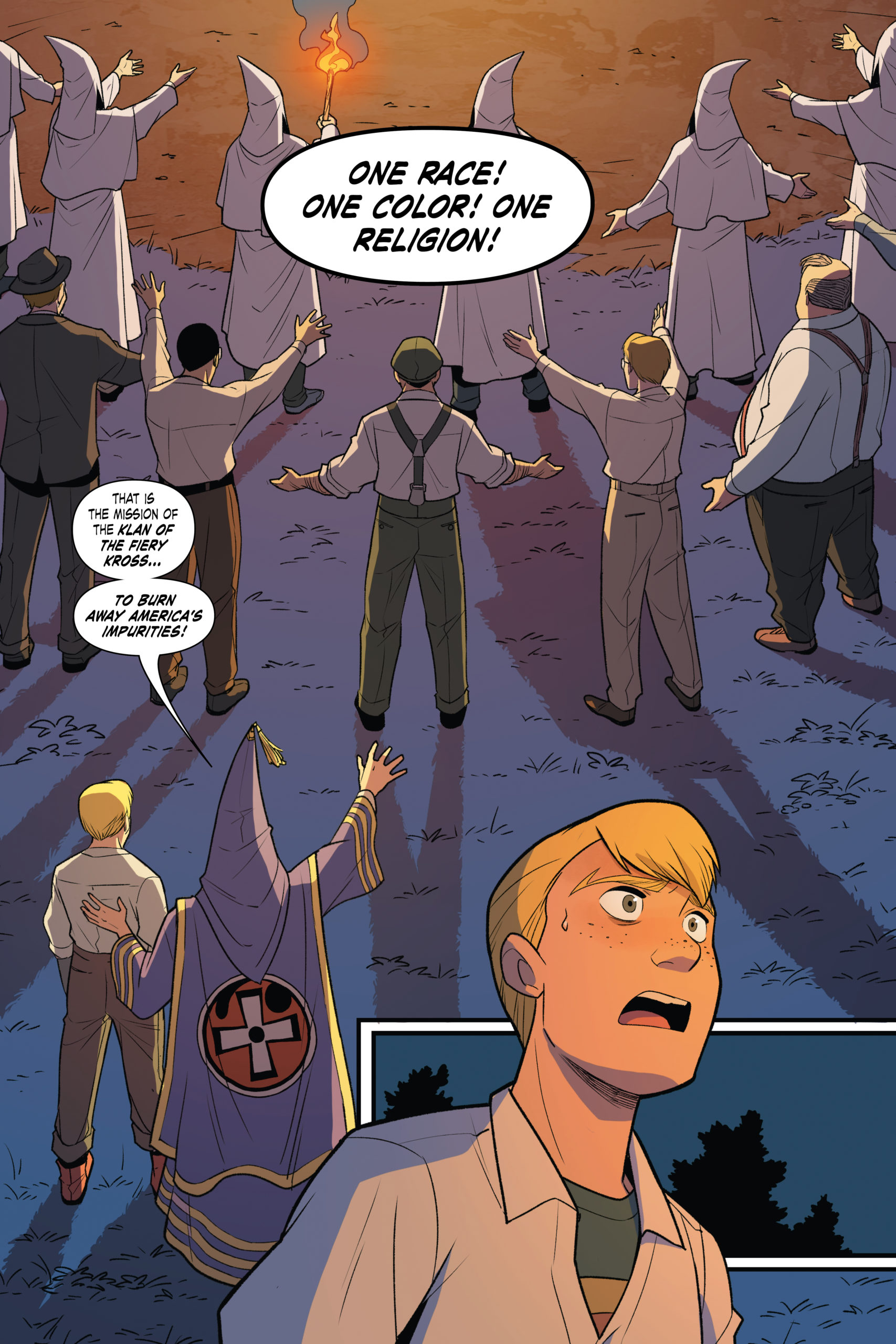 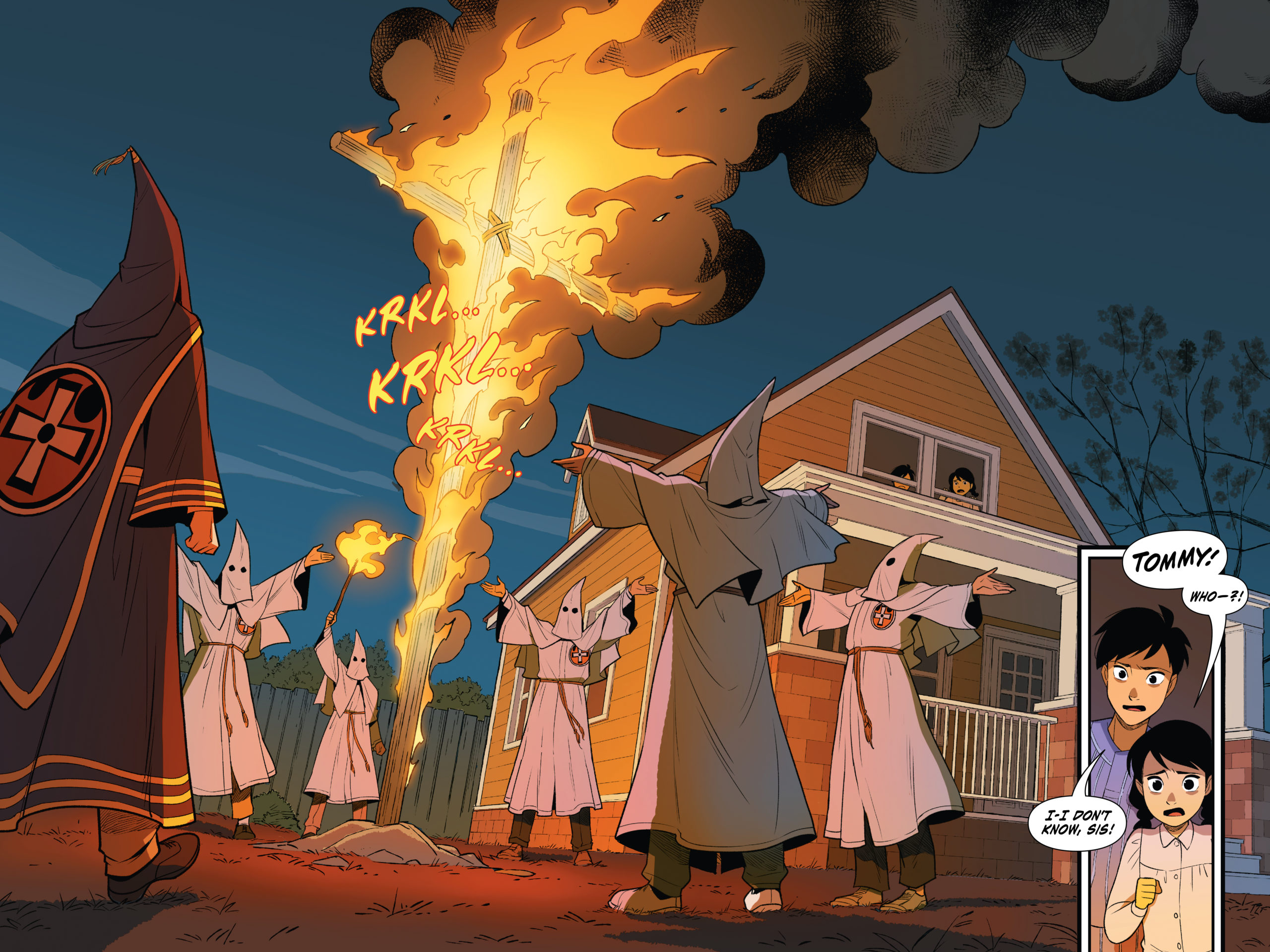 In addition to Superman, the main characters of Superman Smashes the Klan include:

Tommy Lee: He’s the oldest child of two in the Lee family. He loves baseball, is social, and couldn’t be more excited to move out of Chinatown. His only faults are at times making self-deprecating jokes about his Asian descent: “it’s like Confucius says…” “these wontons don’t fry easily.”

Roberta Lee: She’s Tommy’s younger sister, but can come across as the older one with her maturity and insightfulness. Although at times, she lets her shyness get the best of her and doesn’t speak up as much as she should.

Chuck Riggs: Coming from a family of nationalists, he struggles to reconcile his personal feelings with family’s views throughout the book. But it’s a bit ironic that Superman is a hero to this would-be bigot. 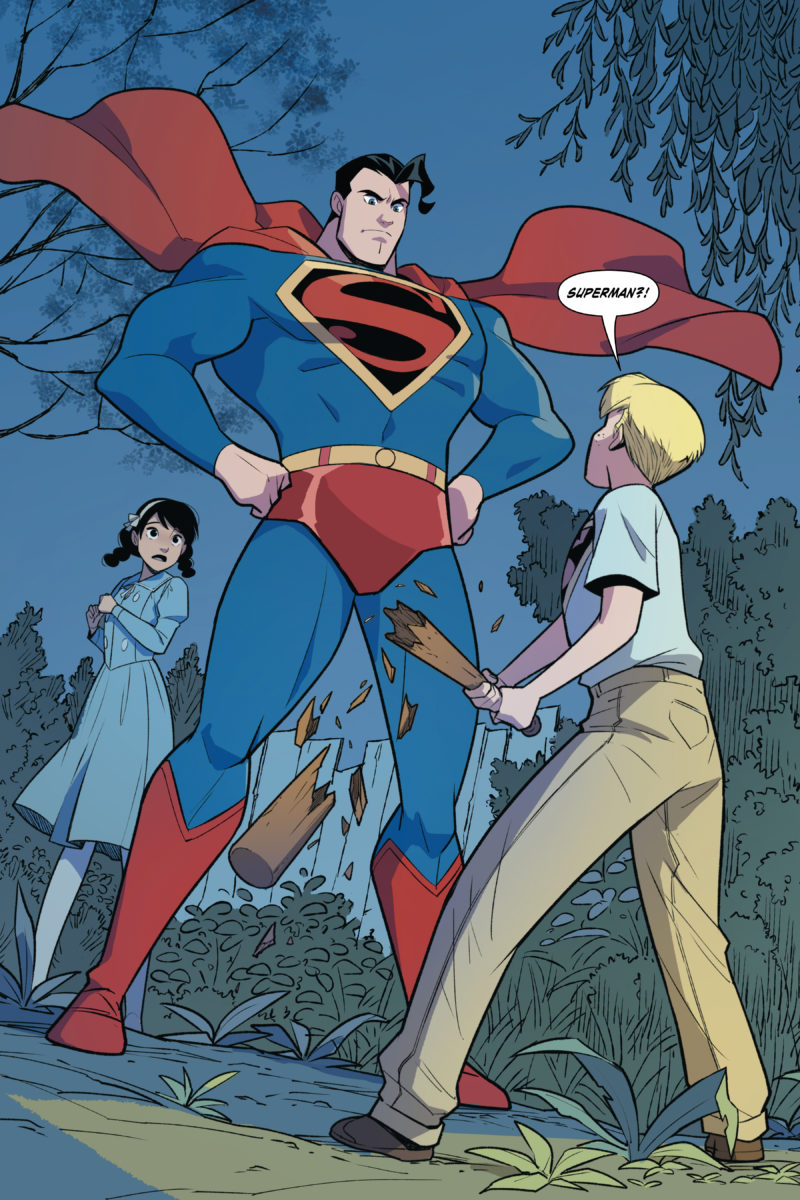 Themes of Superman Smashes the Klan

Superman is able to break through Chuck’s true nature early on by telling him about the essence of being a good person, “If you might be able to help another person, you ought to at least try.”

These words inspire Chuck to do the right thing and share what he knows about the Klan and their plans, even taking action on his own.

Chuck is a well-written character. While he is from a family who asks “is it really all that bad to want to live around only people who look like you,” we’re able to sympathize with his situation. He’s conflicted by what he grew up believing and what his personal experiences have come to be. It’s that conflict and friction that leads him to have trouble accepting that what his family believes in is opposed by his hero, Superman.

I’m sure if it were any of us, to have grown up with such beliefs, even as we open ourselves up to better ideals, we would still put on some form of resistance, denial that the people who raised us are wrong or even bad.

Chuck’s character development throughout the story represents this idea of coming to terms with one’s upbringing and not allowing it to affect you as you choose to be a better person.

Through flashbacks, we learn that during his childhood Superman was accused of being a demon or a monster as a result of others witnessing him levitating and using heat vision. This led him to deny his heritage and limited his own potential.

In this story, it’s Roberta who is able to convince Superman to embrace his true roots.

“You want everybody to believe that you’re just a better version of a normal human… but the truth is.. you can do things that are entirely different from what humans can do.”

Given his experience in writing stories about racial struggles and understanding identity, Gene Luen Yang is the perfect person to write this kind of story starring Superman, quite possibly the world’s most powerful immigrant. 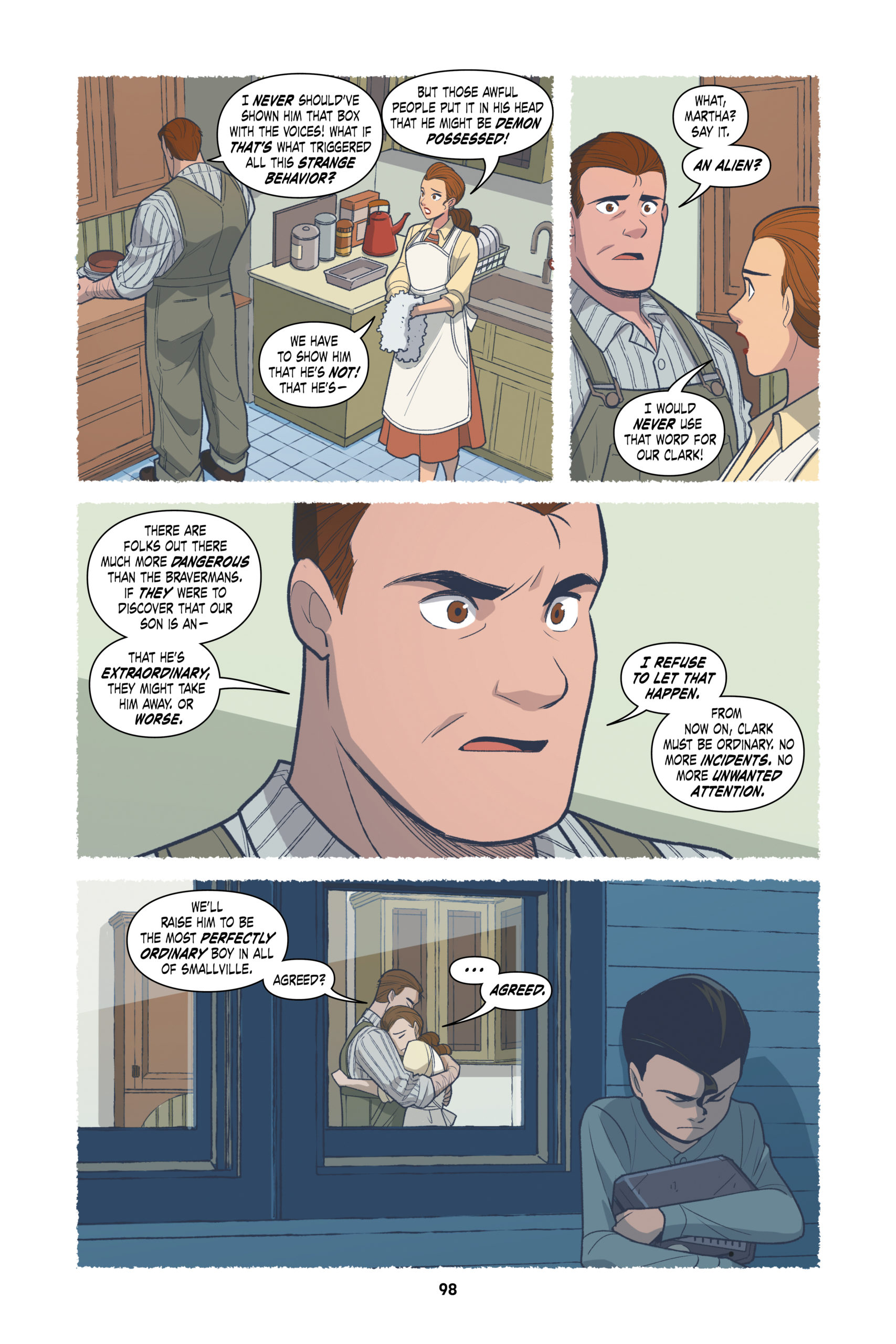 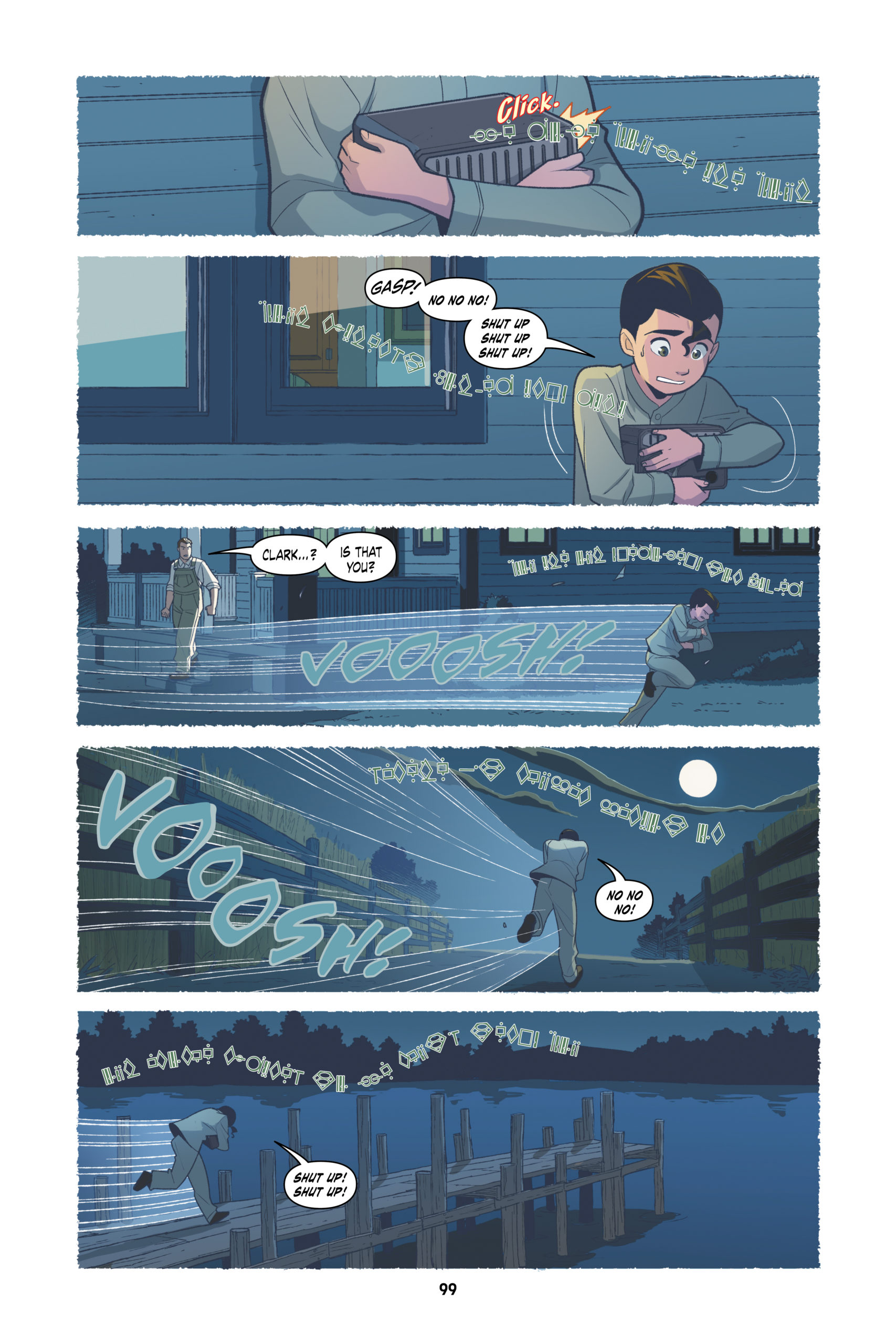 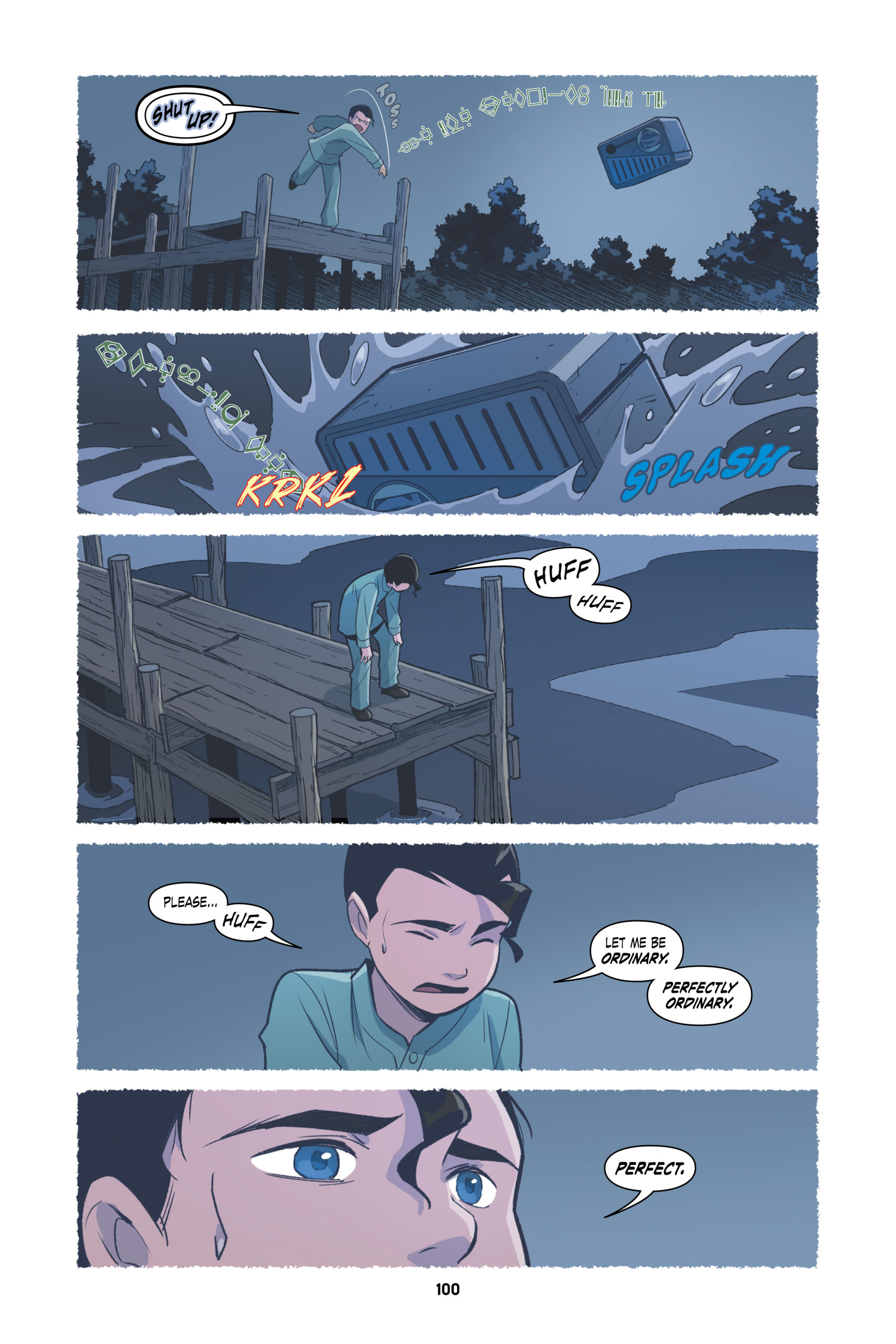 Tommy and Roberta’s new friends praise them for their bravery in standing up against the Klan with words like “my grandpa used to say that Chinese people are sneaky, but my dad would tell him that you all are actually hard-working and brave.”

This is when Roberta feels compelled to speak and urge against generalizations and stereotypes, “We’re not all brave, y’know. Or sneaky. We’re not all anything.” Well said, Roberta.

Now the members of the Klan in this story are definitely vocal about their beliefs.

One even asserts to Superman, “If you truly loved your nation and your race – you would recognize that!”

It’s worth pointing out that these nationalists, who believe they are of some superior race, are convinced that surely the strongest man they’ve ever seen has to be from their same group.

“When push comes to shove, you cannot unite a nation of people who share neither blood nor history. And as much as you want to deny it, Superman, you are one of us.”

Oh, how wrong they are. He might be from Kansas but Clark Kent has so much more in common with immigrants given his creators’ Jewish heritage.

“Whatever you did, wouldn’t have worked had you been of inferior blood. You’re living proof of just how superior a white man can be.” 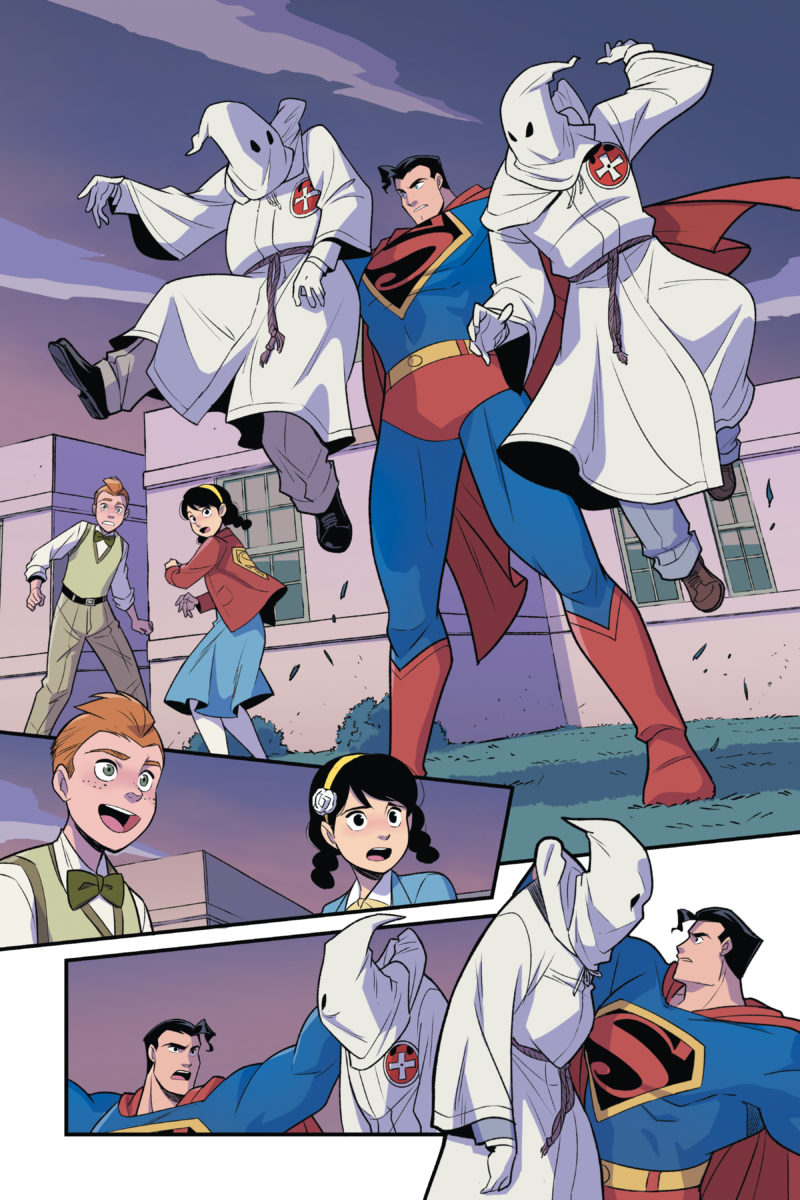 It’s a perfect irony in this case that Superman did not have to do anything for his powers. He was simply born on another planet and came to Earth where his gifts could be fully used for good.

Even once Superman shares his alien roots, the leader of the Klan pushes on, stating that only by forming a nation of only people who look alike, can America survive. “That has been the Klan’s point all along! A nation bound by nothing cannot last!”

But Superman disagrees. He believes a nation can be bound together by so much more than the color of hair, eyes, skin, religious belief, or national heritage. A nation can come together as a choice, as a decision, and in response to what lies ahead.

“We are bound together by the future. We all share the same tomorrow.”

Preview: Red Hood and the Outlaws #4

‘Shazam’ Fans need only to #JustSayTheWord