If you’re unsure of what Tokusatsu is, it means “Special Filming,” and refers to a very special type of filmmaking from Japan.

Hakaider was once the antagonist of the 1970s tokusatsu series Jinzo Ningen Kikaider, but this feature places him in a post-apocalyptic setting, taking on a religious hegemony which takes place in what was once Jerusalem, that brainwashes its citizens and sometimes turns them into cyborg footsoldiers. The dictator of “Jesus Town,” Gurjev, fashions himself as a sort of angel, and often sends Mikhail, an android named after the archangel from the Bible, to capture the most difficult cases, including Hakaider.

This is what Hakaider looked like back in the ’70s.

This is Hakaider in the 90s. It’s like seeing Before and After pictures for P 90X!

The plot itself, is deceptively simple. There’s an anti-hero who’s rebellious at his core, and he has to battle a powerful and misguided villain who’s seemingly good. The religious imagery is heavy, but the film’s main criticism seems to be more towards organized religion, and its attempts to control the masses, or maybe the director Keita Amemiya simply thought it was cool to have characters themed after angels. 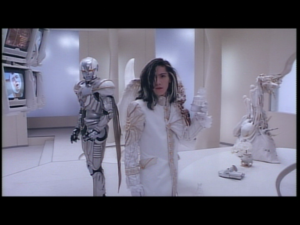 Mikhail and Gurjev. If you’re confused, Mikhail is the robot.

Visually, the film is black vs. white: all-black Hakaider and rebellious bikers going up against start white armies and Mikhail, shown as the last hope for free will in a city controlled by virtually one man. It’s breathtaking in many scenes, and a really amazing feast for the eyes.

Mikhail, Hakaider, and some of the white foot soldiers.

So, if you’re still unsure about tokusatsu, this is probably gonna be your gateway drug. It was one of the movies that made me realize that live action in Japan has just as much punch as its animation, and it should be a must-watch for 90s action sci-fi.