5 New Anime Series To Get You Started!

There is so much anime to watch out there, this list barely scratches the surface.  If you look hard enough, there is an anime out there for you.  The wonderful thing about streaming platforms is that it will provide you suggestions that match the series you just watched.  Watch Gundam, and you may discover Cowboy Beebop.  Watch Psycho-Pass and you will discover Ergo Proxy.  Watch Ranma 1/2, and discover multiple romantic series.  While some may argue that anime is waning, thanks to streaming, it’s still going strong.

Impressions: Fanservice is when an anime features nudity, panty shots, homo-erotic poses, and revealing outfits.  Keijo is 100% fanservice and does not take itself seriously at all.  The plot is typical sports anime; a talented underdog amazes the coaches while earning the ire and respect of their peers.  The twist is that it’s all well-endowed women in swimsuits playing a game that only Japan could come up with.  Don’t expect a deep plot, just sit back and enjoy the insanity.

Crunchyroll is simulcasting each episode as they come out.  They are subtitled in Japanese language only. 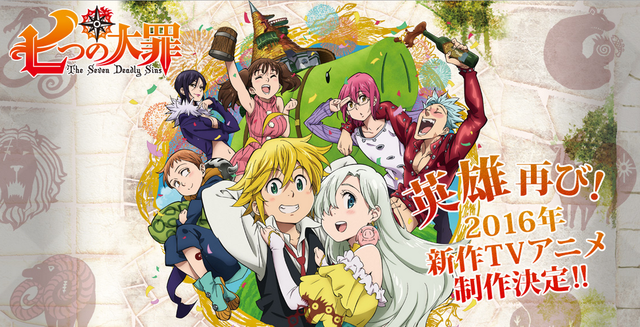 Story: Elizabeth, a princess from the kingdom of Britania, is looking for the legendary knights called the Seven Deadly Sins to help her reclaim her kingdom.  It is her hope they can restore the monarchy and stop the “Holy Knights” who have taken over her country.  She meets Meliodas, the young and immature owner of a small tavern, and his pig Hawk.  After saving her life, he reveals himself to be the former leader of the Seven Deadly Sins.  After hearing her story, he agrees to help her find the rest of his band.  As they travel, they must deal with not only the threat of the Holy Knights but the demons of their past.

Impressions: The Seven Deadly Sins is more of an action comedy than a serious “sword and sorcery” epic. It has solid characters, and engaging plot, and well-done animation.  The story doesn’t get bogged down in overly long battles and depressing story arcs. It also adds in a dash of fan service to keep things on the lighter side.

Netflix has all 26 episodes of the series, which can be switched from the English dub to Japanese with Closed Caption subtitles.

Story: In the near future, people are monitored by a vast computer system that analyzes their crime potential. If a person approaches a certain level, their Psycho-Pass is reported to the Enforcers for capture or execution.  Akane is an inspector, whose job is to keep control of the Enforcers.  With the exception of her and her boss, all the Enforcers have been deemed dangerous to society.  They are kept under lock and key, only released to hunt.

Impressions: Dark and moody anime in recent years have tripled (along with romantic comedies).  These series feature mostly anti-heroes doing rather horrible things for good reasons.  Psycho-Pass is no exception.  The series tackles many of the themes covered in Minority Report; until a person commits a crime, does that make them a criminal?  What standard do you judge sanity?

Hulu has both seasons, but only the first five episodes as either subbed or dubbed.  The rest are subtitle only.  Crunchyroll has all episodes subtitled only.

Story: Ryuko is seeking revenge for the death of her father.  Her path leads her to Honnouji Academy, and the evil student council led by Kiryuin.  Armed with her scissor shaped sword and a sentient sailor suit named Senketsu, Ryuko cuts a swath of destruction in order to get her vengeance.

Impressions: While a typical revenge story, what makes Kill la Kill so outrageous is that it throws in everything but the kitchen sink.  Outrageous characters, bloody action, sentient clothing, comedy, action, and fan service, each episode brings something new and weird to your screen.  Forget about plot, just let the art wash over you.

All episodes are available in a subtitled format on Hulu and Crunchyroll.

Story: Mankind has terraformed Mars.  While the Mars citizens want independence from Earth, they are too dependent on their economic aid.  Mikazuki is an orphan conscripted into service with a private military contractor.  He is ordered by his masters to protect Noblewoman Kudelia, who is fighting for independence.  Soon, Mikazuki and his charge are attached by Earth forces looking to stop the young woman.  Mikazuki has only one choice, to pilot the dangerous and unstable mobile suit, Gundam.

Impressions: One of the darkest of the Gundam series, it’s age old story of a small group fighting against superior forces is what you expect.  It’s full of angst, heartache, and emotion.  Like most Gundam series, the conflict between the Earth and the “rebels” is not as clear-cut as it seems.  Political intrigue is never far away, and this one delivers plenty.  It also has its trademarked robots kicking the crap out of each other.