A Comic I Recommend to Everybody No Matter What: Batman #44

A comic I recommend to everybody no matter what is Batman #44 (2011), “A Simple Case” written by Scott Snyder and Brian Azzarello with art by Jock, color by Lee Loughridge, and letters by Deron Bennet.

The standalone issue takes place one year after the Zero Year (the New 52’s new origin story for Bruce Wayne’s debut as Batman) and opens up with the discovery of a dead body of a teenage boy. Batman confirms he was shot four times and Commissioner Gordon suggests it was the work of a local gang in the teen’s neighborhood. Batman suggests differently as he’s determined the cause of death to be a fall from a thousand feet in the air.

And so begins this local detective case for Batman in his first year as Gotham’s dark knight.

Now, this issue incorporates newspaper text into the pages and layout. Words from the Gotham Gazette are used to add depth and perspective to the case and ongoing circumstances of the city. 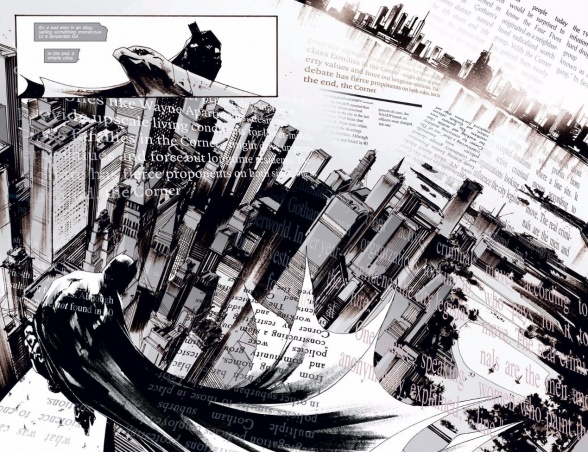 Now, this issue incorporates newspaper text into the pages and layout. Words from the Gotham Gazette are used to add depth and perspective to the case and ongoing circumstances of the city.

Why I Recommend It

I recommend Batman #44 “A Simple Case” to everyone because it is a perfect example of the artistic potential of comics as well as the creative medium it offers to address real-world topics in stories featuring iconic legacy characters.

“That’s what fiction is for. It’s for getting at the truth when the truth isn’t sufficient for the truth.” – Tim O’Brien, The Things They Carried.

The artistic potential of the comic medium is illustrated here with its inclusion of newspaper text across different pages and panels. And, in this one case, Batman comes to terms with topics such as police shootings against unarmed black men and gentrification, the latter of which he is somewhat responsible for, despite his good intentions.

A comic like this shows that superhero stories are more sophisticated than some may give them credit for. Comics can be a vehicle for ideas and drive important discussions. And at the same time, comics are more than boxed frames and speech bubbles. An artist can utilize the blank space provided to further the story and themes through whatever effective visual communication technique can be imagined and executed. 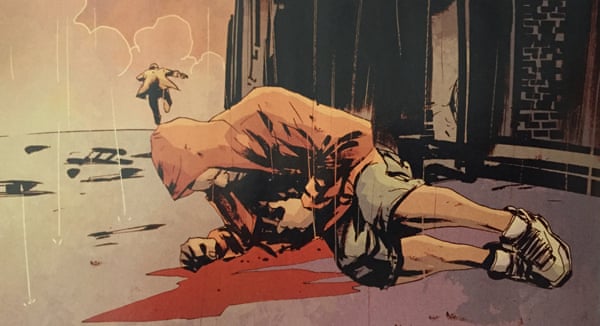 “That’s what fiction is for. It’s for getting at the truth when the truth isn’t sufficient for the truth.” – Tim O’Brien, The Things They Carried.

What the Creators Have to Say

“This issue is meant to be a thesis about what our Batman is,” lead writer Scott Snyder told the Guardian.

Throughout Snyder’s run of Batman with artistic partner Greg Capullo, the pair have brought readers an iteration of Bruce Wayne as the Dark Knight who is not synonymous with vengeance but rather a symbol of hope for the people of Gotham to believe in and see as a shining example against the darkness that looms.

“We’ve tried to be pretty relentlessly on-point about him being a symbol of inspiration in the face of tremendous fear, as opposed to a symbol of punishment, or a symbol of revenge, taking the city away from criminals,” Snyder said.

But on the journey to becoming that symbol of inspiration, Batman has to come to terms with the shortcomings of his initial beliefs in how to best save the city and its people, all of its people.

“Here is where he begins to learn [the limits of] the methods that he thought would work: finding a criminal, making an example of the criminal, throwing the criminal in jail… Instead, what he has to learn is that the problems he’s facing in today’s city are much more humbling, are much more complicated,” Snyder said.

In a city like Gotham, where some are able to enjoy a life of luxury and excess whether through honest means or illegal methods, naturally there are those who are not so fortunate and live each day in poverty and struggle. And when a rich person with good intentions like Bruce Wayne tries to solve the problems of the poor with money, gentrification becomes a topic at the heart of this Batman story.

“This thing is such a ripple, the way lives are affected by gentrification. On one hand, yes, you’re cleaning up this area, you’re making it more livable for people. But you’re not saying anything about the people that live there,” said co-writer Brian Azzarello.

Upon coming face-to-face with gentrification, poverty, and other complex matters such as institutional racism and police brutality, Batman recognizes that to be the hero Gotham needs him to be, he’s going to have to take on problems with a new mindset.

“Batman is learning he can’t solve problems in the ways he thought he could. It’s much more about understanding what people face in their everyday lives: knowing their fears, knowing their anger, and trying to show them, in a way, that they can and we together can fix, or hopefully make baby steps in fixing these problems that seem intractable, entrench and impossible to overcome,” said Snyder. 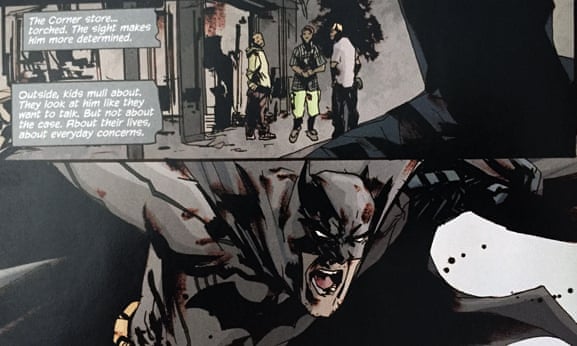 But on the journey to becoming that symbol of inspiration, Batman has to come to terms with the shortcomings of his initial beliefs in how to best save the city and its people, all of its people.

It turns out that the Penguin knew the deceased teen and had accepted his offer to work together, as the boy’s father owned a storefront that one of the Penguin’s rival gangs was interested in.

However, Penguin denies having anything to do with the death, stating that the last time they met, he was alive.

Batman follows the trail and approaches the head of the local gang that was giving the boy, Peter, trouble. He claims to have had no part in the boy’s death but admits that the store was gifted to him, confirming Batman’s hunch that Penguin betrayed Peter by giving the store away as a peace offering. Well, it turns out, Peter wasn’t too happy about that and attempted to take matters into his own hands by taking on the gang. And since he left that encounter alive, the mystery of his death is still unsolved.

Batman finds the person who fired bullets at Peter, Ned Howler, a veteran cop in Gotham. This is a shady cop who operates in the gray and when Batman comes to him, he’s already making justifications such as doing his job, getting a gang fight call. The newspaper text on this page cites NAACP statistics about officer-involved shootings and the majority of them in recent years involving black individuals. And again, this case remains open as the cop confesses to firing and running away, but upon returning Peter was gone.

Back to square one, Batman pays a visit to Peter’s father who is still unconscious in a medical bed. However. Peter’s cousin is there to talk to Batman. Batman learns that Peter was told by his cousin to go to the money after he went to the robbers and the cops. But by money, he is referring to Bruce Wayne, not the banks who “don’t listen to folks with no money.”

A flashback brings us to a public gathering where Bruce Wayne is speaking and unfortunately Peter’s cries for attention are unaddressed. The newspaper insert ponders the question about whether or not the developments in lower-middle-class neighborhoods like Peter’s “might drive up property values and force out longtime residents” – a prime example of gentrification.

In his desperation for a solution, Peter turns to a place called Blossom Row, “ a place you go when you’ve had it with things.” At the end of the alley, Peter meets a man who hands him a special substance to consume. By now, Batman receives a report from Gordon identifying things in Peter’s blood such as samples from Dr. Kirk Langstrom/Man-Bat and venom steroids.

Batman is able to close the case. Peter was desperate to protect the grocery store his father owned. So desperate he attempted to work with Penguin. And when Penguin would double-cross him and rich, powerful men like Bruce Wayne wouldn’t listen, he would go to great lengths to obtain the power necessary to survive. But that cocktail of unstable chemicals would lead his downfall as he would achieve the ability to fly in addition to super strength, which would ultimately fail him at 1,000 feet in the air leading to his crashing demise.

By the issue’s end, he makes another effort to enact positive change in the Gotham neighborhood known as The Corner. He swoops down to approach boys he previously scared away. This time he understands the difference he can make just by listening and conversing with the very people he is trying to protect and save.