Every spring, fans descend upon sunny California to attend WonderCon— a pop culture gathering featuring panels, signings, exhibition booths, and merchandise opportunities. Starting in 1987, WonderCon has called several cities home, with the Anaheim Convention Center being the most recent and prominent. Growing up in California, which hosts several annual conventions, I must admit I’ve never attended one. The following is a recap of WonderCon, and my attempt to fully take advantage of the $40 Friday badge.

WonderCon attendees who paid early received their badge through mail; I was a late register so I had to pick it up onsite. Directed to the underground Hall E, the process to nab the colorful “She-Ra” plastic bag containing the badge, lanyard, and guide was quick and easy. I showed the con employee my confirmation email and received the goodies in exchange. Unlike other crowded events I’ve attended, WonderCon 2019 lacked bag checks or metal detectors pass-throughs at its entrances. Instead, radio-frequency identification stations (aka RFIDs) were scattered around the Center, passed with a tap of a badge: green light means go, red means try again. 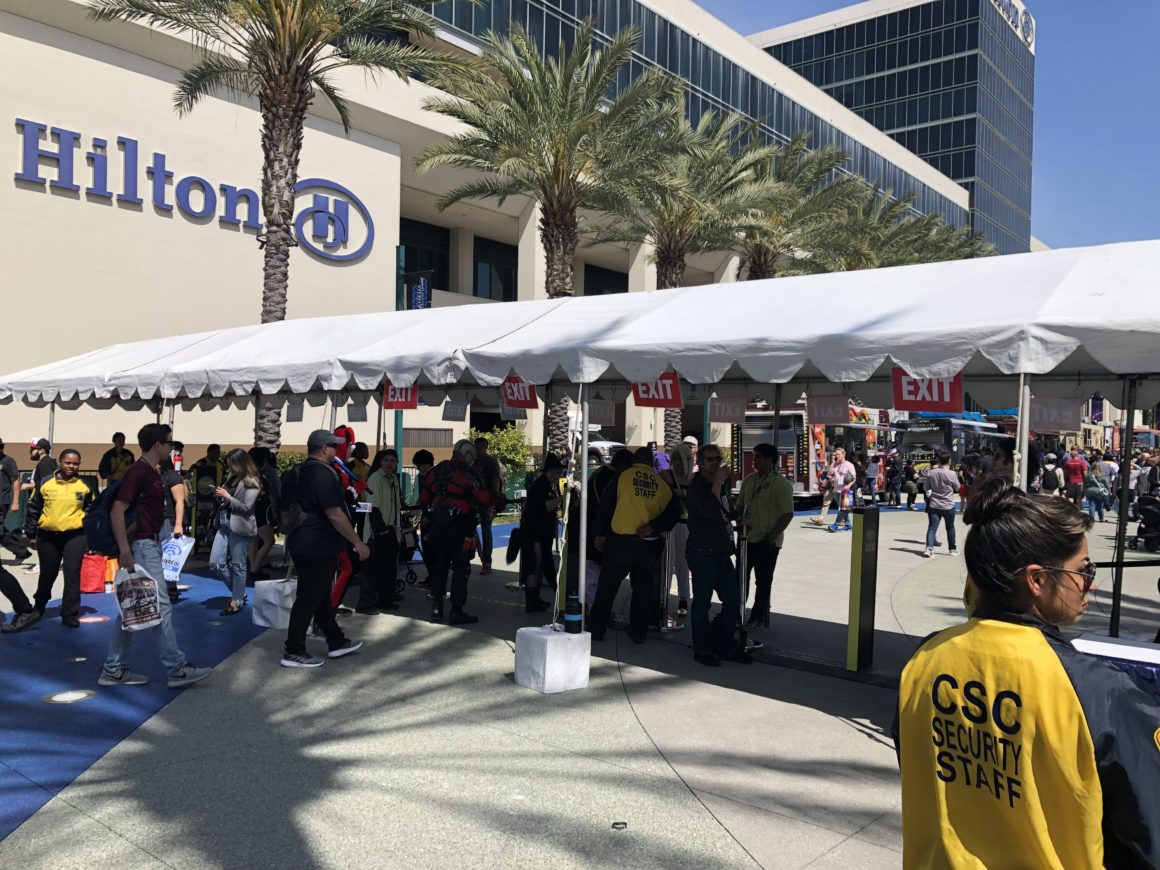 Radio-frequency identification stations, aka RFIDs, can be passed with a tap of a badge. Photo: Danny Pham/dorkaholics 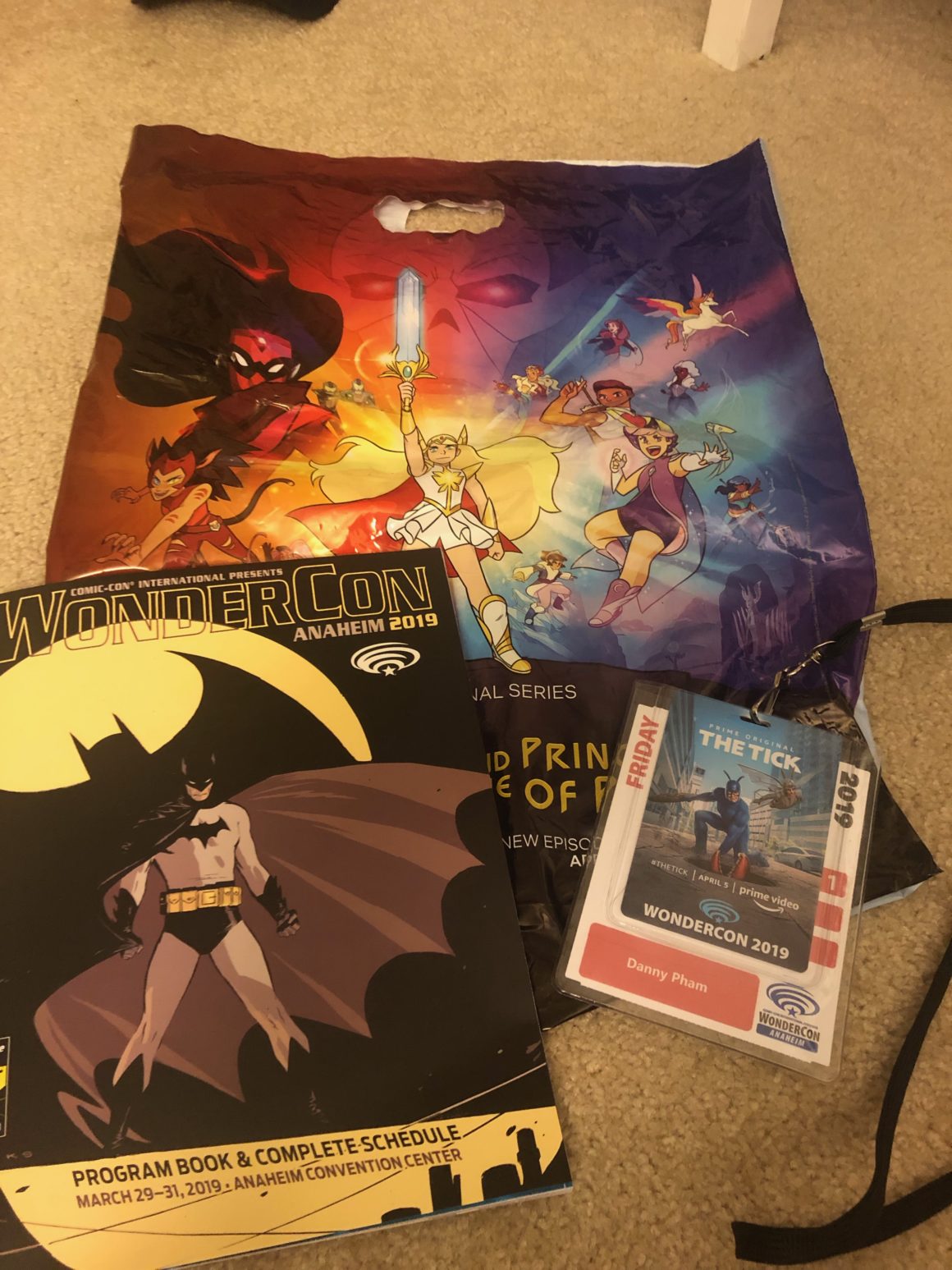 The items attendees receive after checking in. Photo: Danny Pham/dorkaholics

I entered at the exhibition hall around opening time at 11:30 am. Walking the floor, it seemed I was a bit early as crowds were thinner than expected. Artists and comic book booths dominated the showfloor, while comic imprints DC and IDW boasted the biggest, most impressive setups. In full promotional swing, DC bought movie props and an interactive photo op for “Shazam!,” one week before its release. Batman, who was celebrating his 80th birthday that weekend, was represented too. To celebrate the occasion, DC’s booth showcased masks spanning the Dark Knight’s movies, ranging from 1989’s “Batman” to the recent “Batman v. Superman: Dawn of Justice.”

Despite the major company presence, smaller brands greatly outnumbered their larger counterparts. My favorite “indie” booth was Spoke Art’s, a pop-art gallery which brought an assortment of designer movie posters spanning from “Cowboy Bebop” to “Blade Runner.” There were also several unusual sights I never expected to see at a convention; the Exploding Kittens game booth encouraged interaction (and a long line) and others like Period Panties — which sold women’s underwear in colorful, pop culture themes — raised questions. 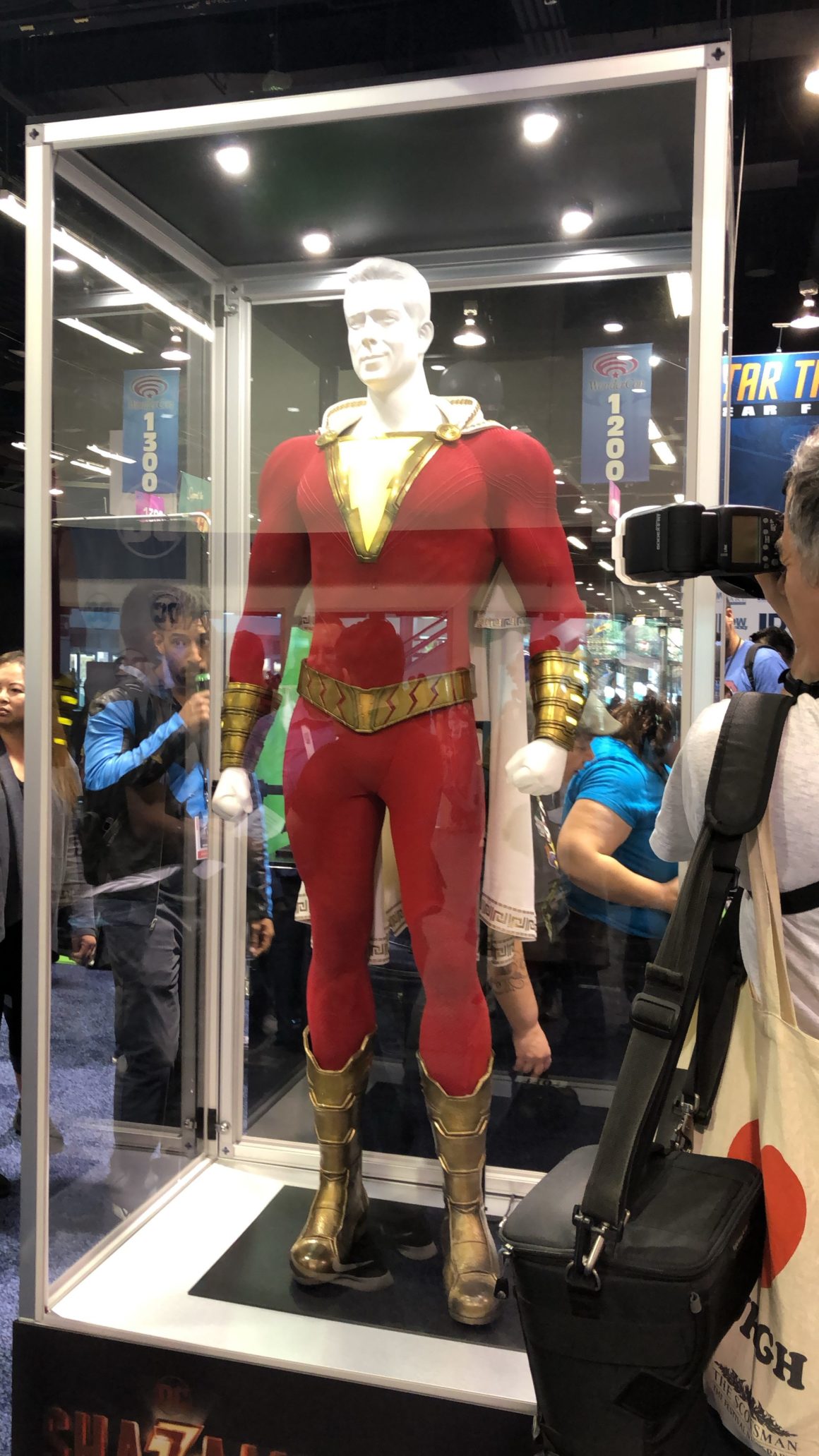 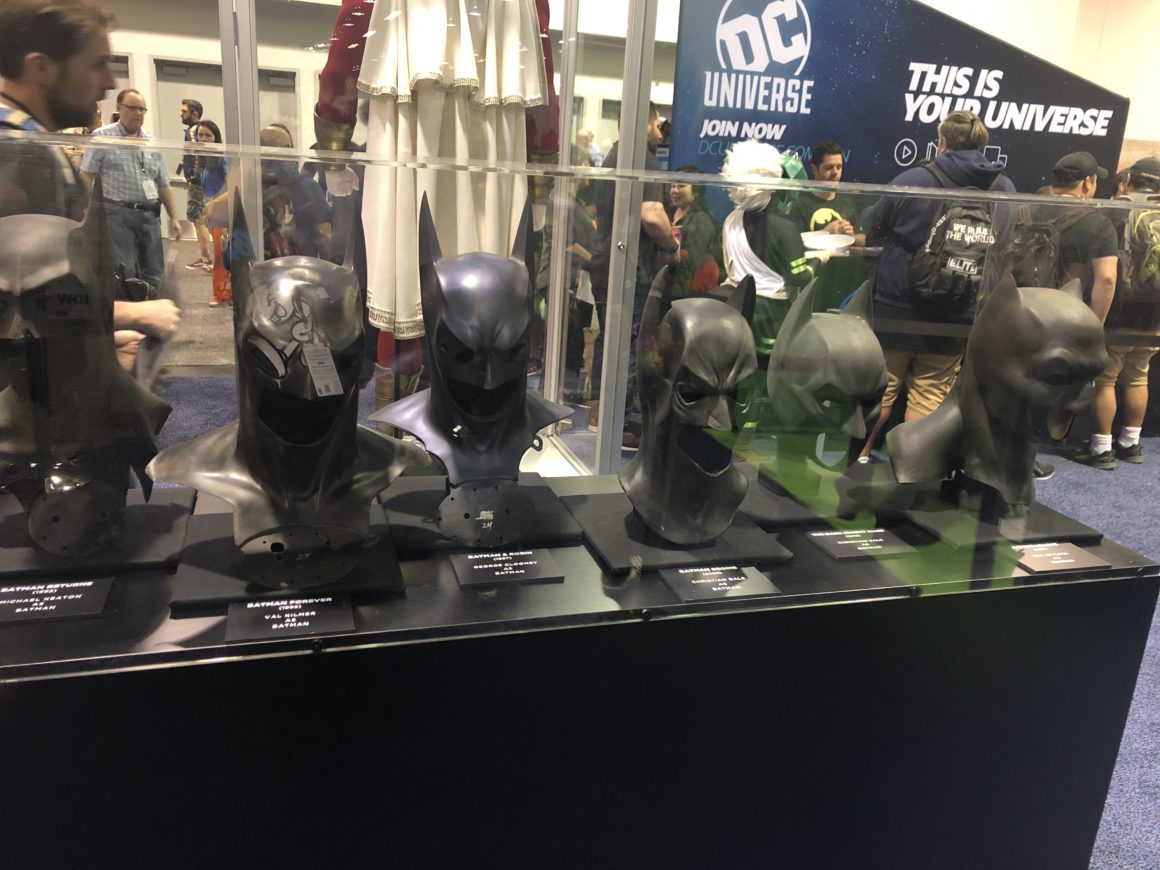 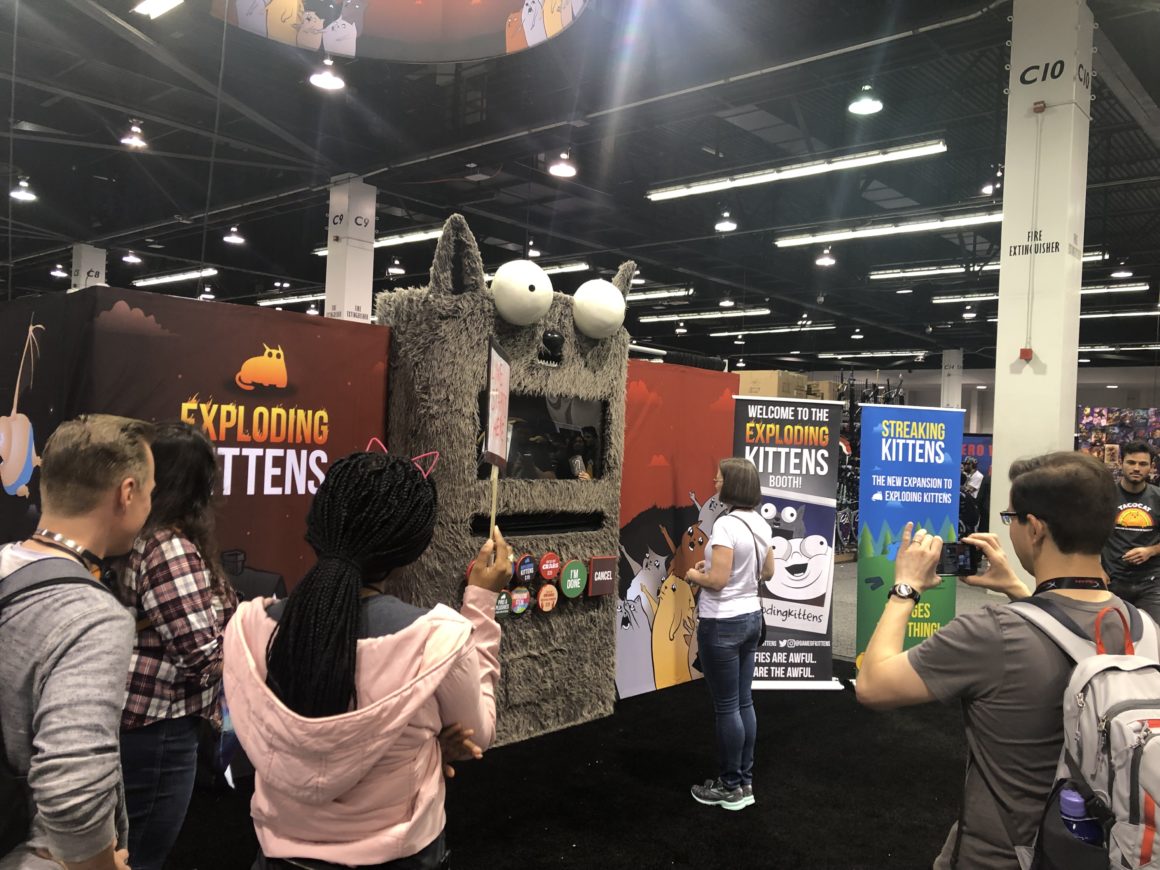 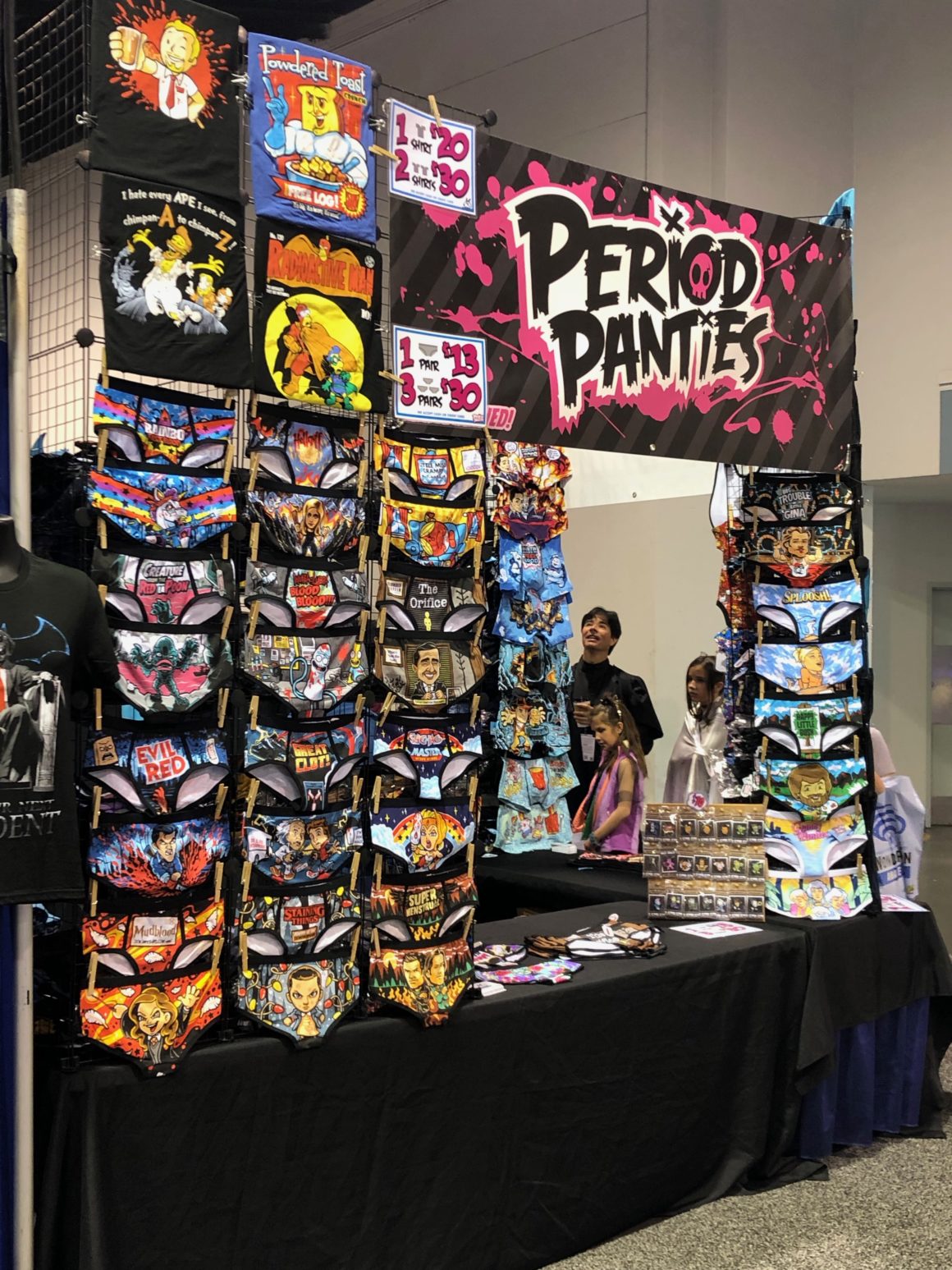 One of the most unique booths at WonderCon. Photo: Danny Pham/dorkaholics

Among the obscure showcases, I found familiarity in the Artist’s Alley, a cluster of comic and pop culture artists. Signing autographs in a corner was Greg Capullo, the illustrator from the acclaimed “Batman” (New 52) run with Scott Snyder — the pair were holding multiple signings throughout the weekend. I had entered a lottery for signings with them and the cast of the upcoming “X-Men” movie, “Dark Phoenix,” but Lady Luck wasn’t with me, so my dream of meeting Jean Grey/Sansa Stark (Sophie Turner) will have to wait.

Another standout was Alex Pardee’s booth, an artist whose twisted work adorned album covers for rock bands like Aiden and The Used. Known for unusual, demented takes on prominent characters, he brought his “Gimmickey Mouse” collection to WonderCon 2019, which were variations of Mickey Mouse disfigured and bloodied — bold considering the con’s close proximity to Disneyland.

As I wandered around, cosplayed fans flooded the floor, bringing a sense of passion I usually don’t see outside WonderCon’s walls. It was heartening to see costumed strangers ask for pictures with each other amongst all the comics, artwork, toys, and props. After heading outside for fresh air and some grub (garlic noodles from The Coconut Truck), I went back inside for panels, and most importantly, air conditioning. 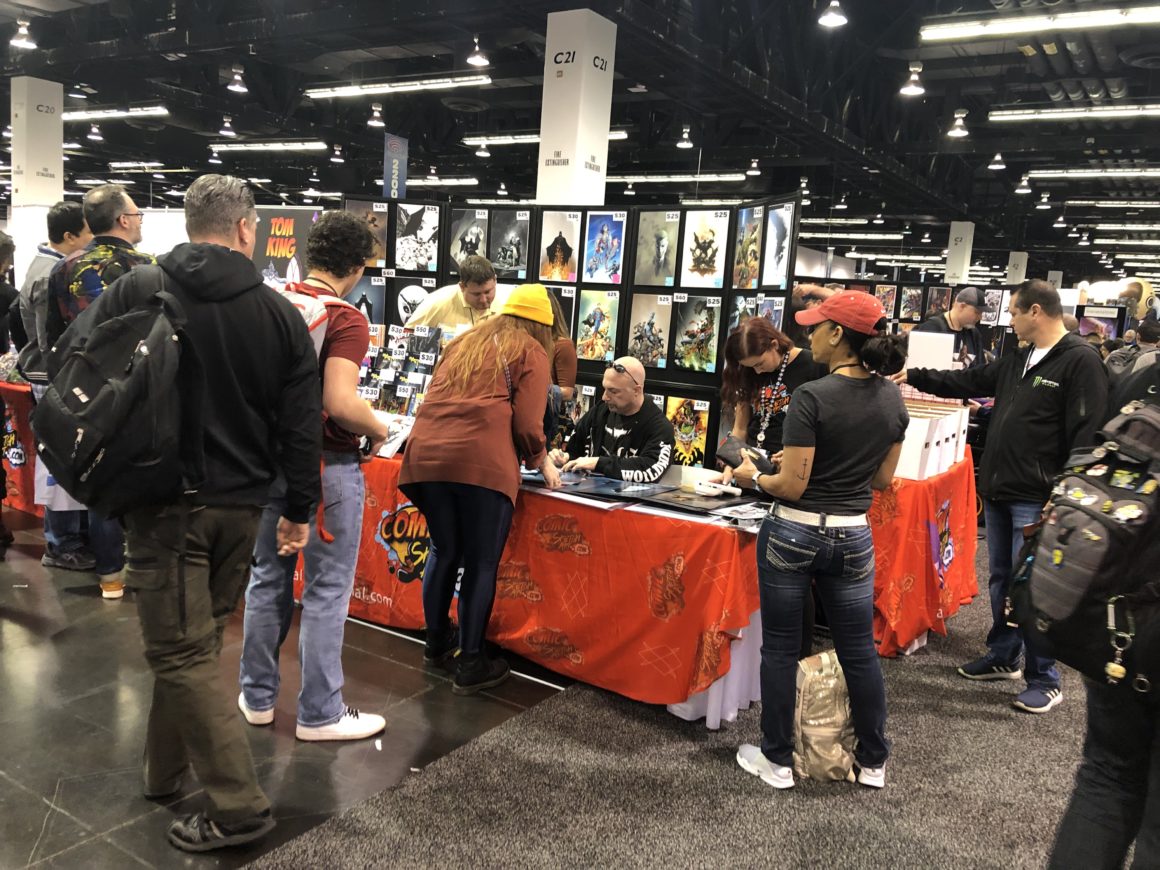 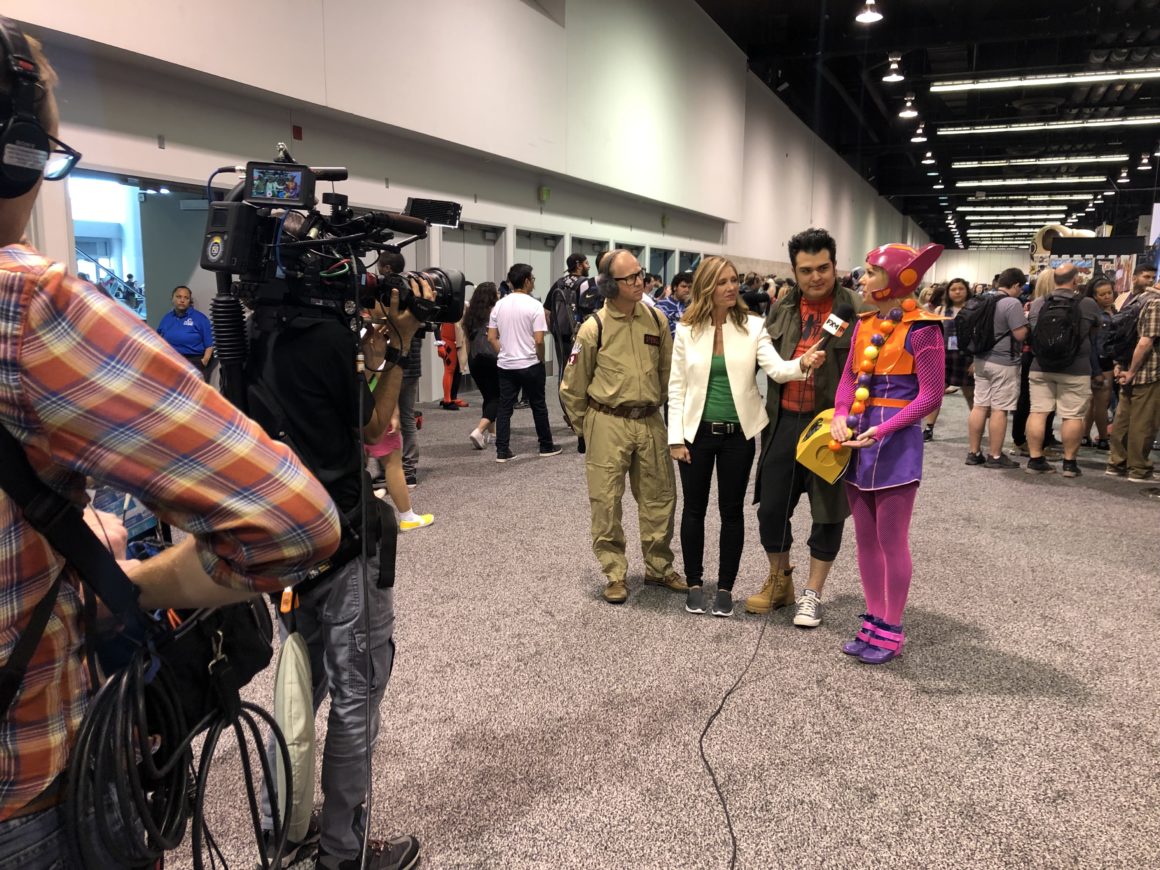 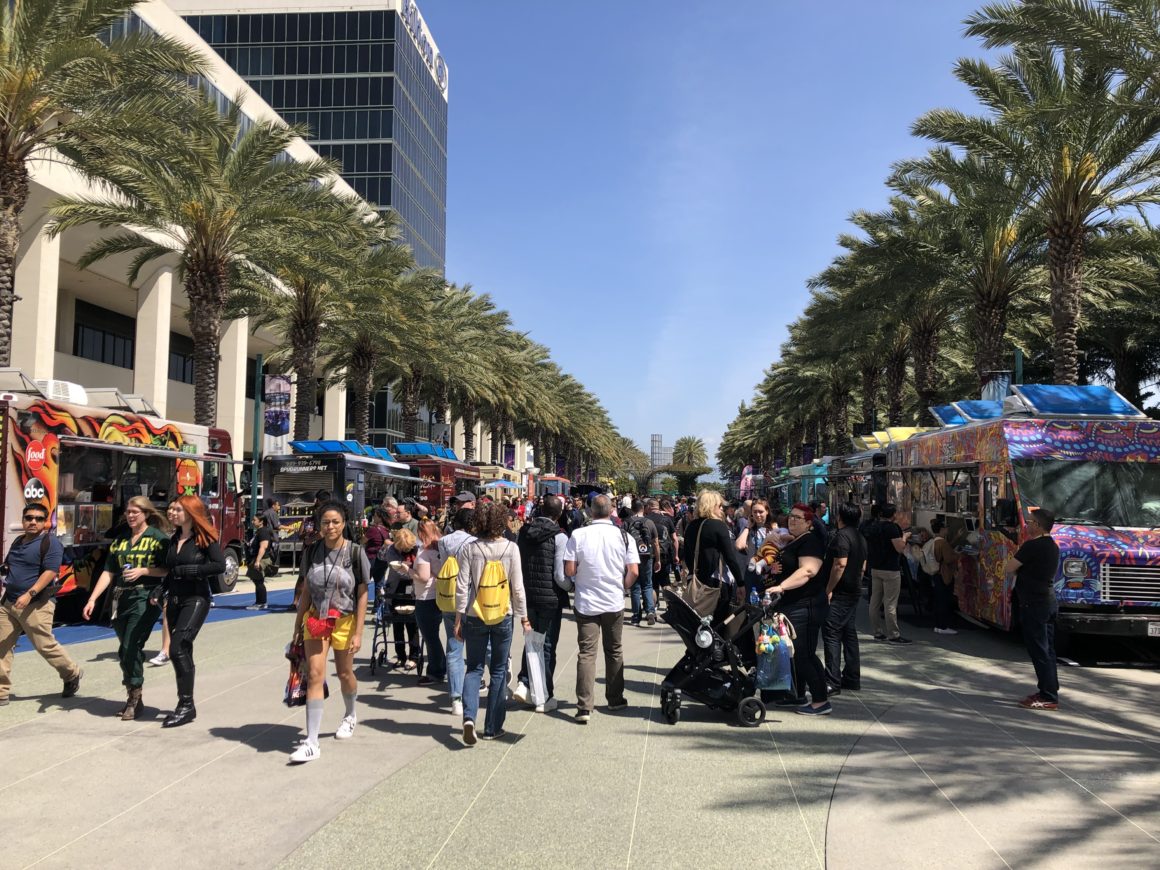 Attendees could choose from an avenue of food trucks. Photo: Danny Pham/dorkaholics

Wanting to attend the biggest panel of the day, “Dark Phoenix,” I headed to the 7500 capacity, stadium-seated Arena an hour before show time. I was surprised at the lack of line after hearing of past issues with Hall H, San Diego Comic Con’s largest panel area. Finding decent seating, I was treated to a reel of animation clips while waiting. At 3:15 pm, moderator Grae Drake brought the cast and crew on stage — who were notably not taking audience questions — to talk about the “X-Men” movie and debut two clips. Cameras were not allowed to record any footage, a rule heavily enforced by employees walking up and down the aisles. By the time the panel ended, I had spent two hours in the stadium, so I stretched my legs on the show floor.

Around 6 pm, I walked to the “Legion” panel, which was held in a 1000 capacity room on the second floor. With its third and final season coming up, the FX hit’s cast — Dan Stevens, Aubrey Plaza, Amber Midthunder, Jeremie Harris, Navid Negahban, and Rachel Keller — joined executive producers Jeph Loeb, Lauren Schuler Donner, and Noah Hawley to promote it. Hawley introduced a short clip featuring newcomer Lauren Tsai as Switch. Tsai, donning bright red headphones and a yellow coat, navigated through several colorful scenes speaking Japanese and listening to time travel lessons on tape. I had no idea what I was seeing, but I was reassured by the panel that “Legion” occupied the unusual part of the MCU.

With the exhibition hall closing at 7 pm and no other panels sparking my interest, I headed home. It was a memorable day, albeit with sore feet and a longing for the next con experience. In hindsight, WonderCon 2019 was an ideal first convention — not too crowded yet fun enough to be satisfied. I suspect a bigger challenge will be had whenever I attend San Diego Comic-Con, but I am ready for it. 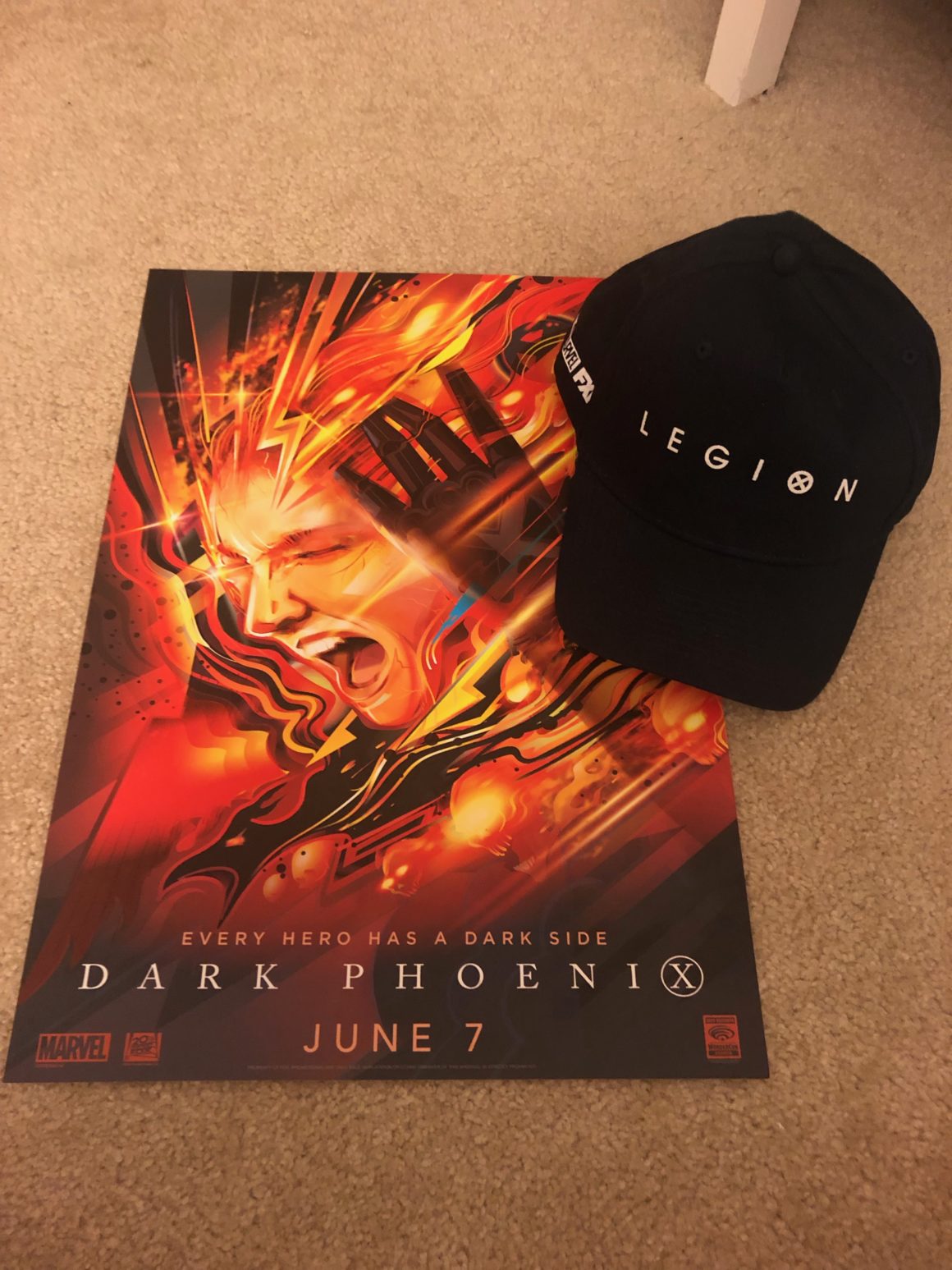 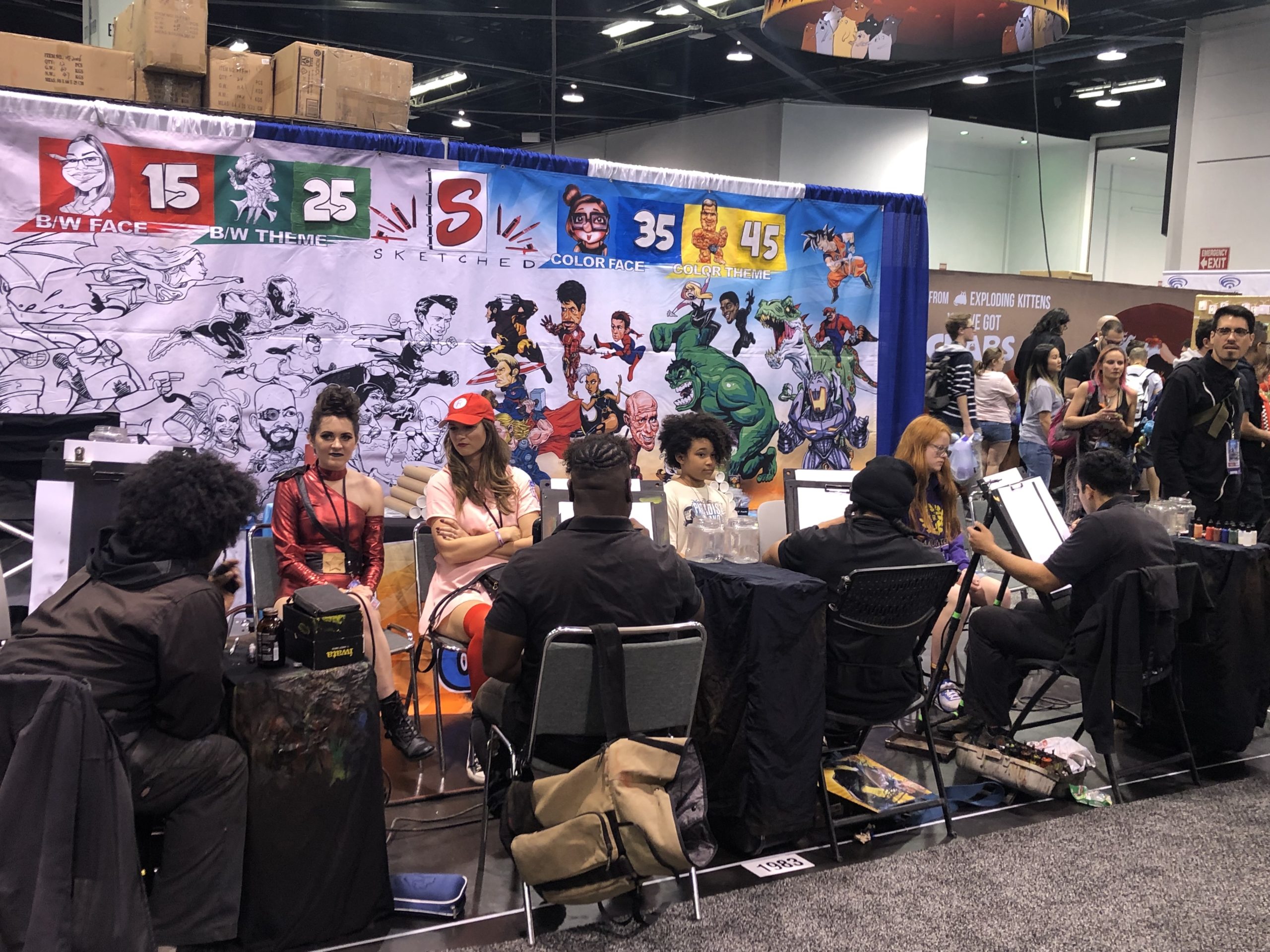 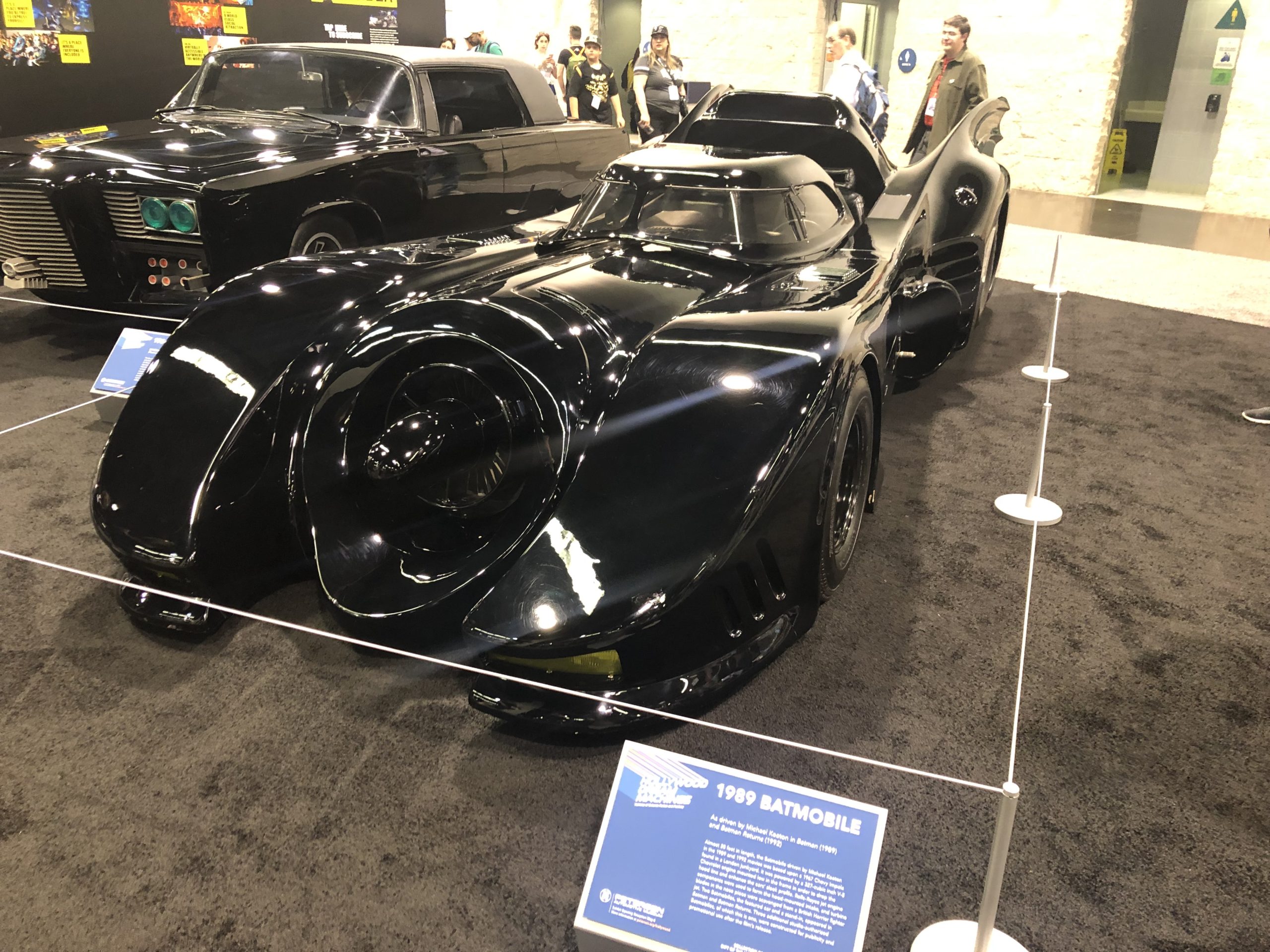 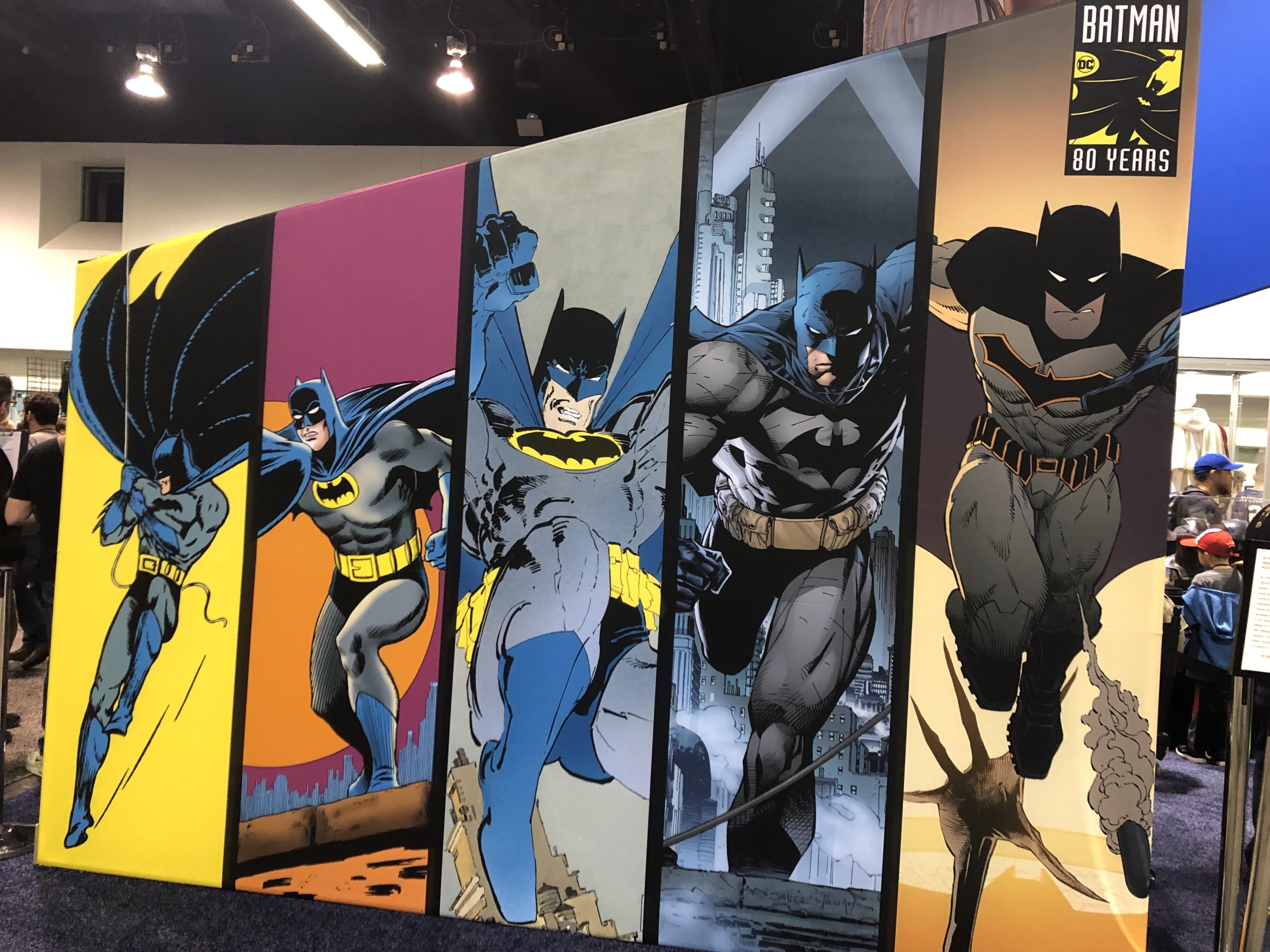 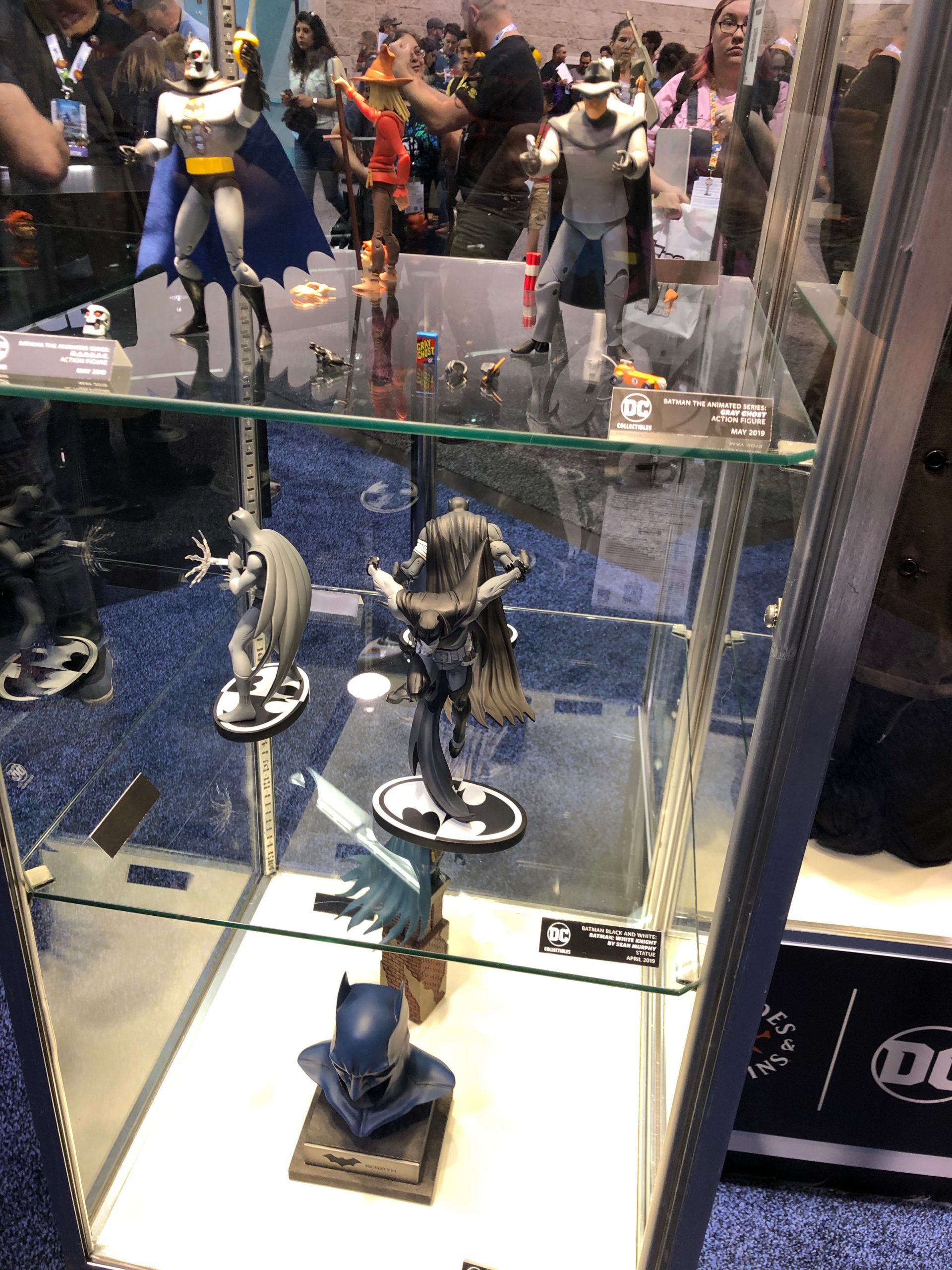 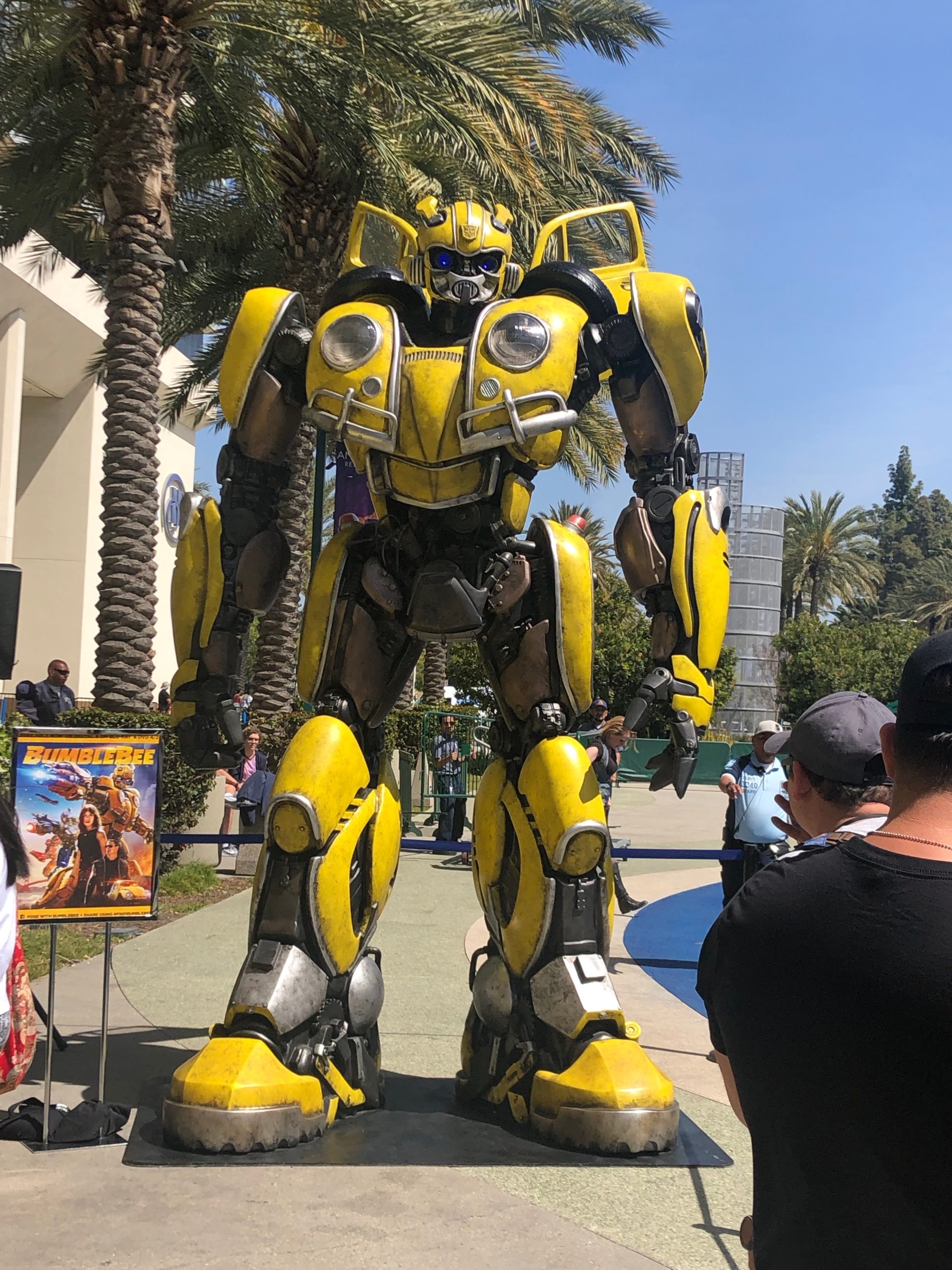 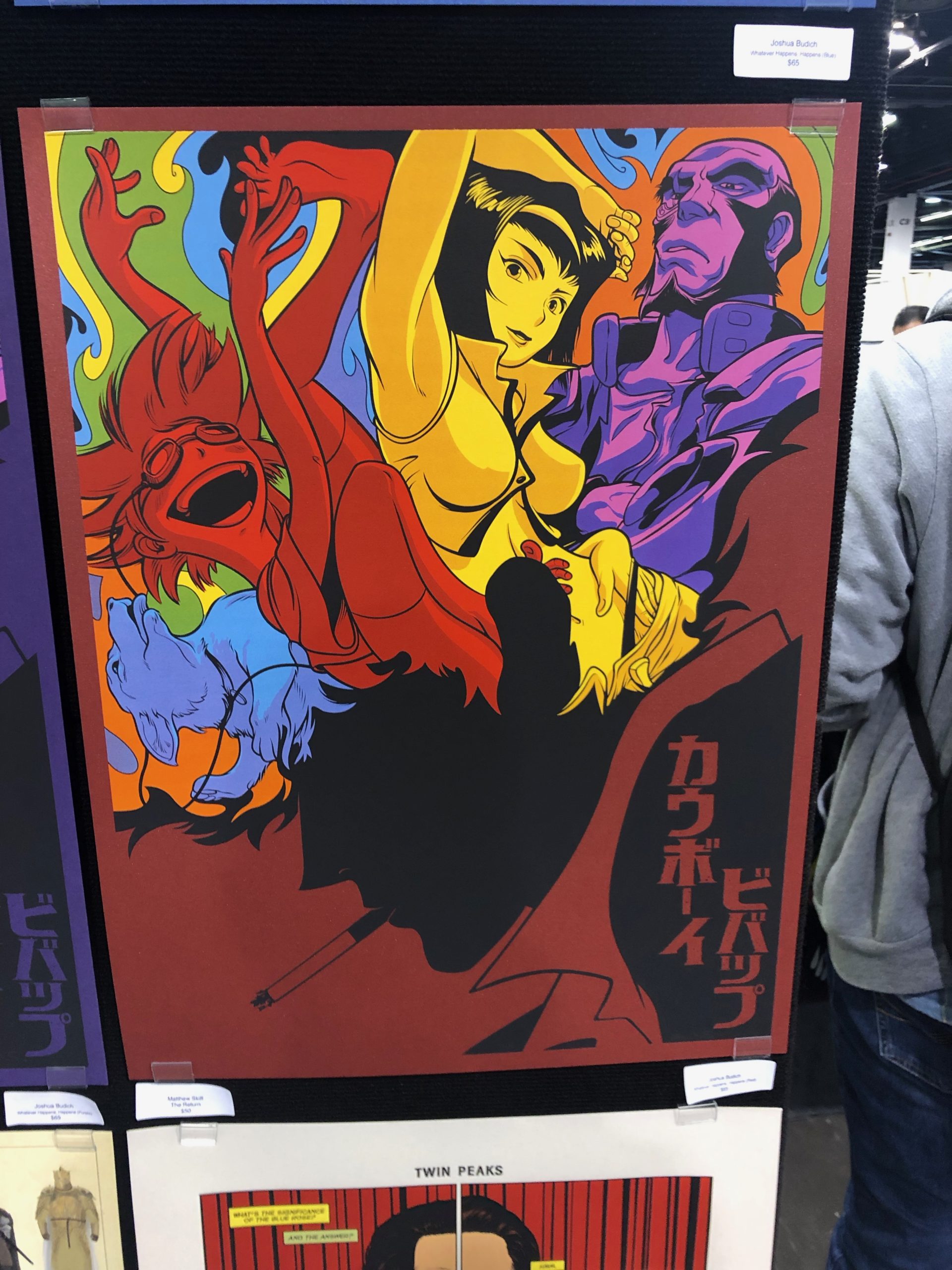 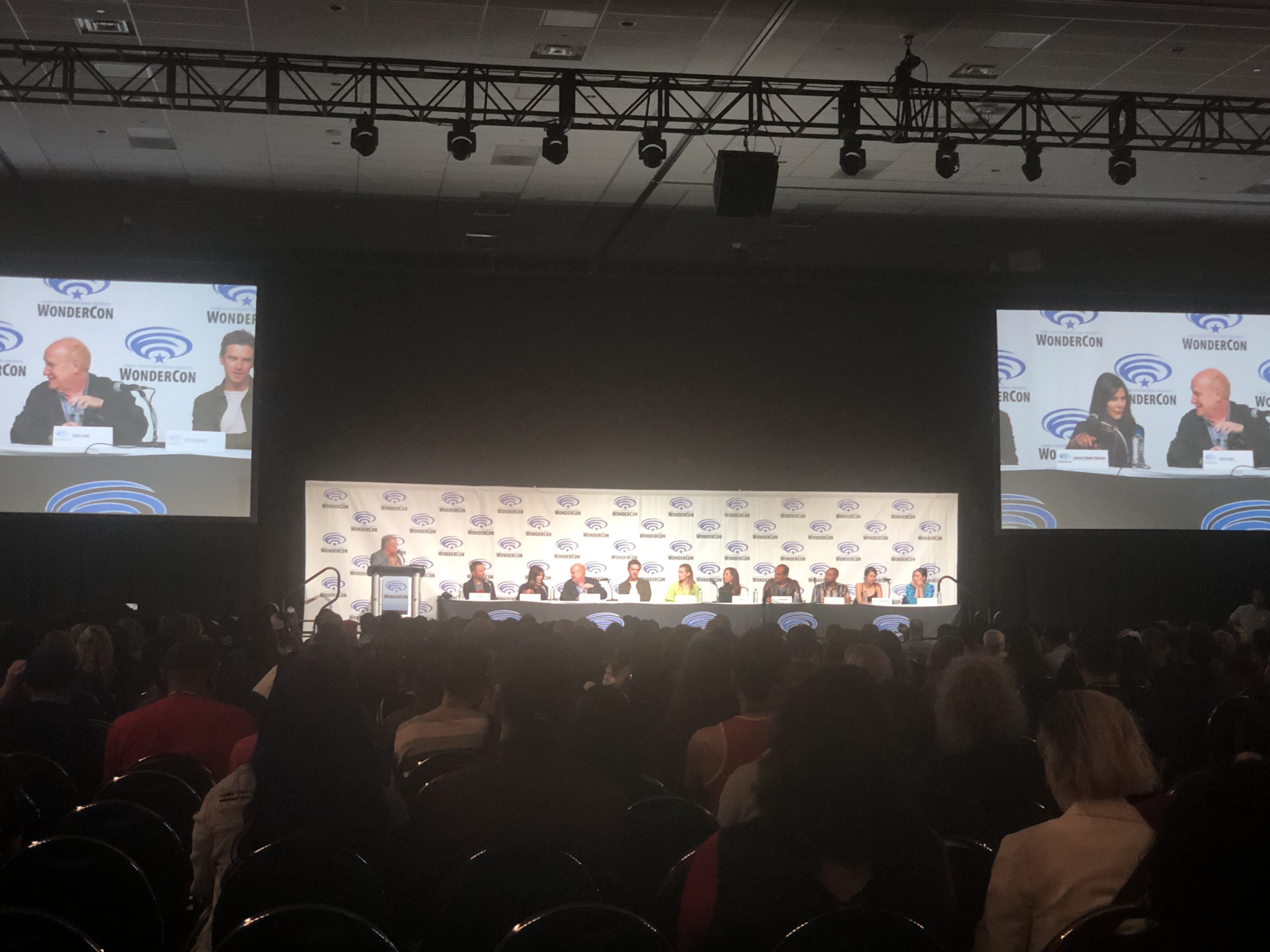 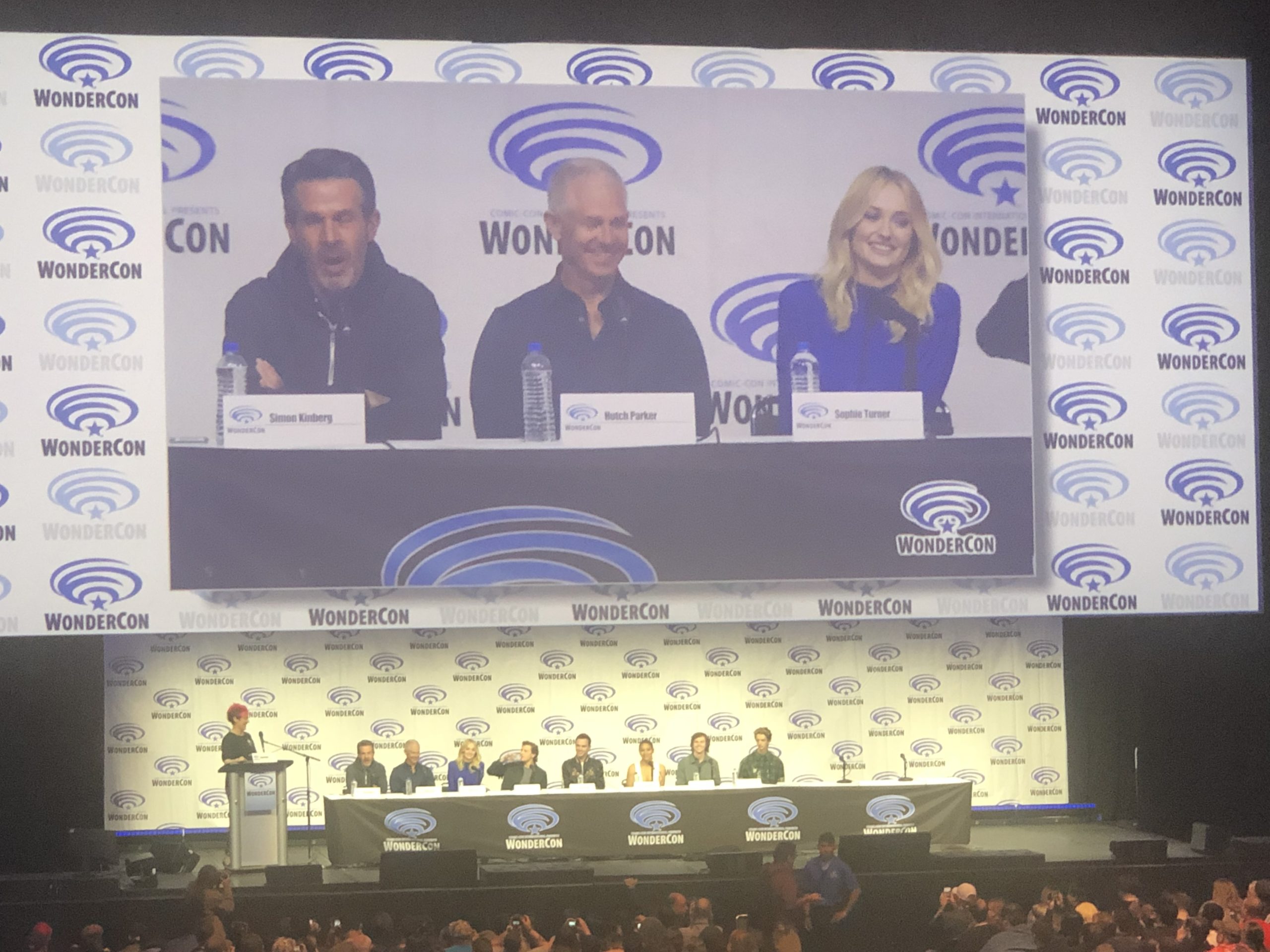 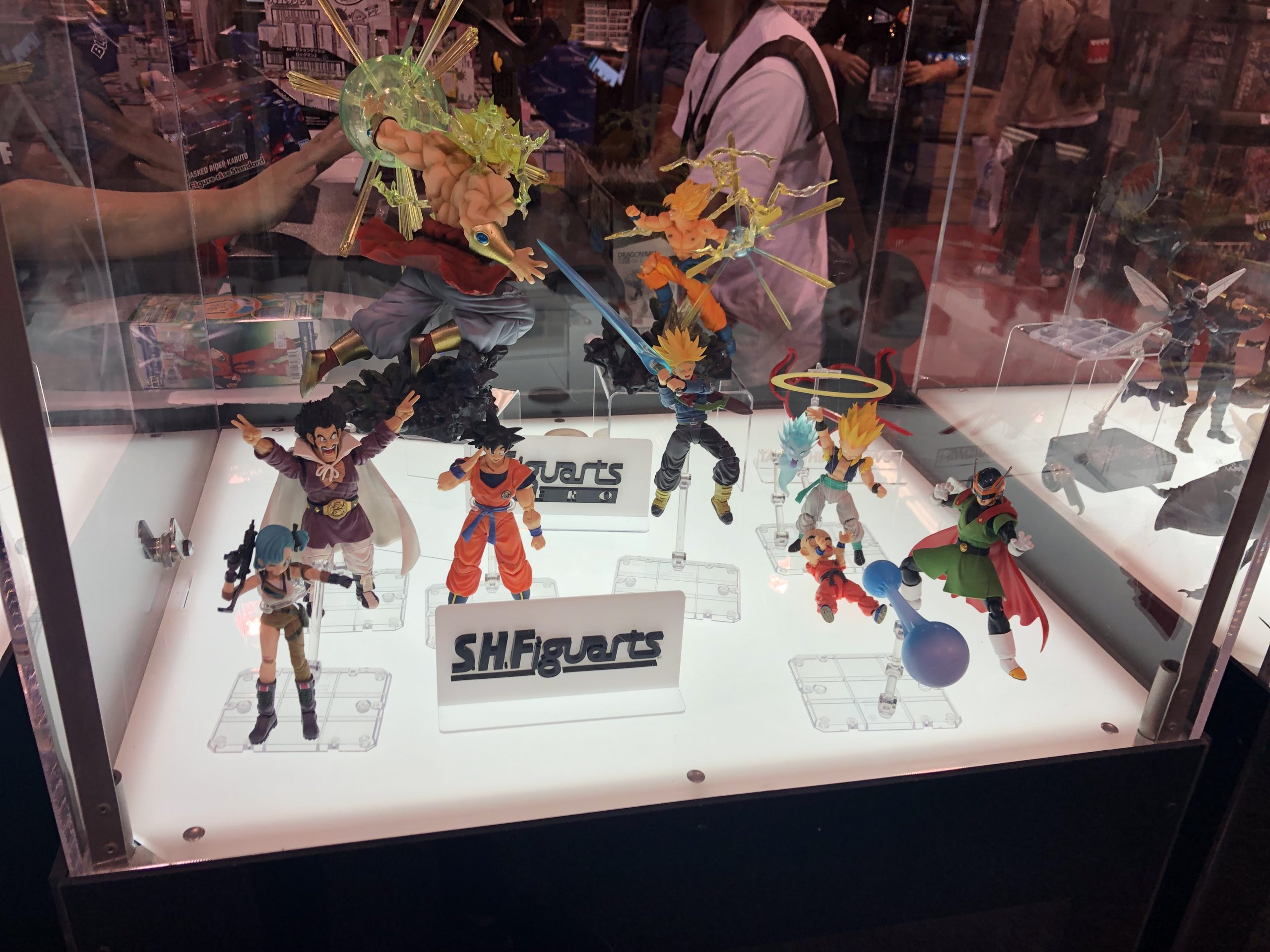 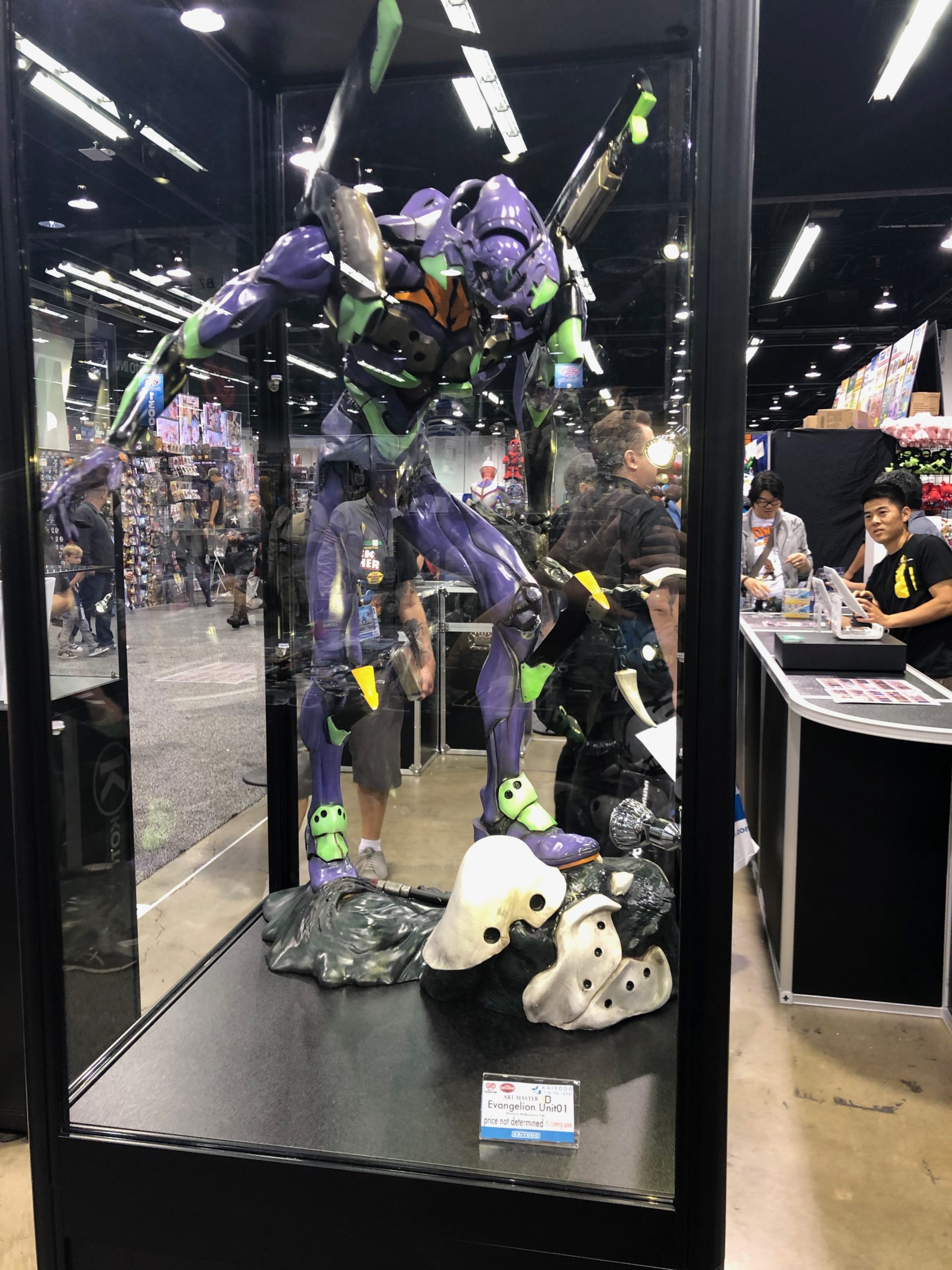 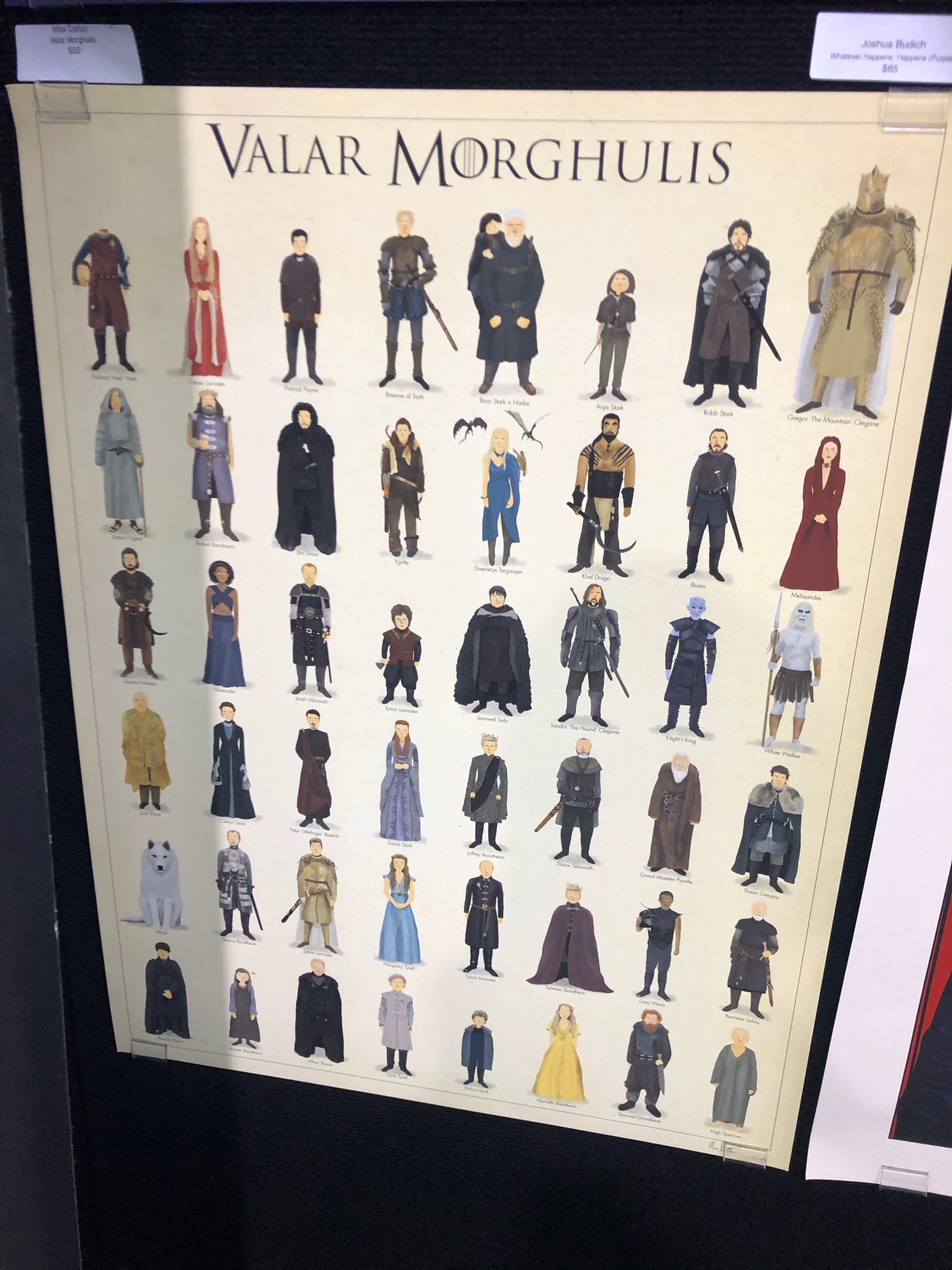 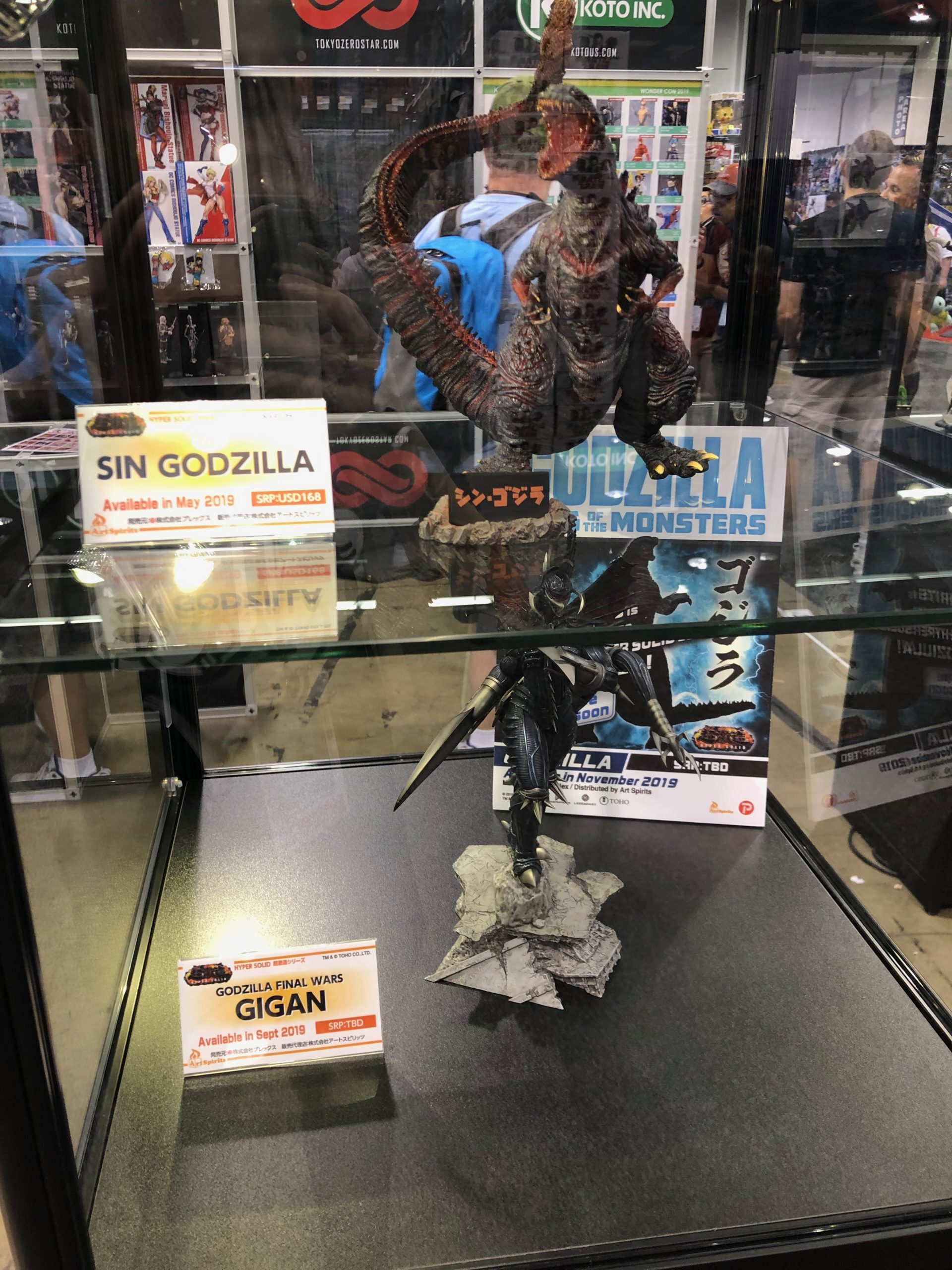 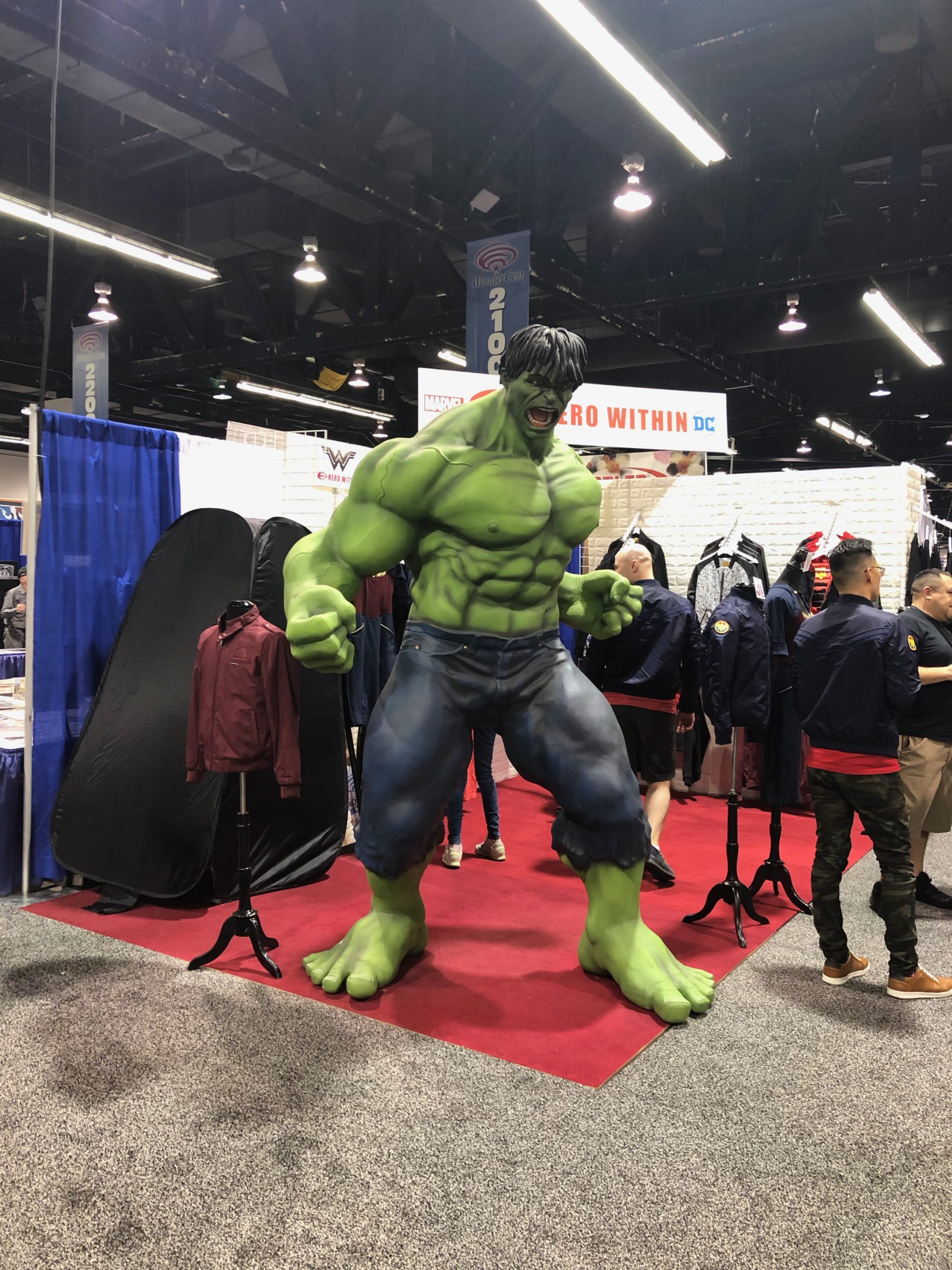 A Hulk statue at the Hero Within booth at WonderCon 2019. Photo: Danny Pham/dorkaholics. 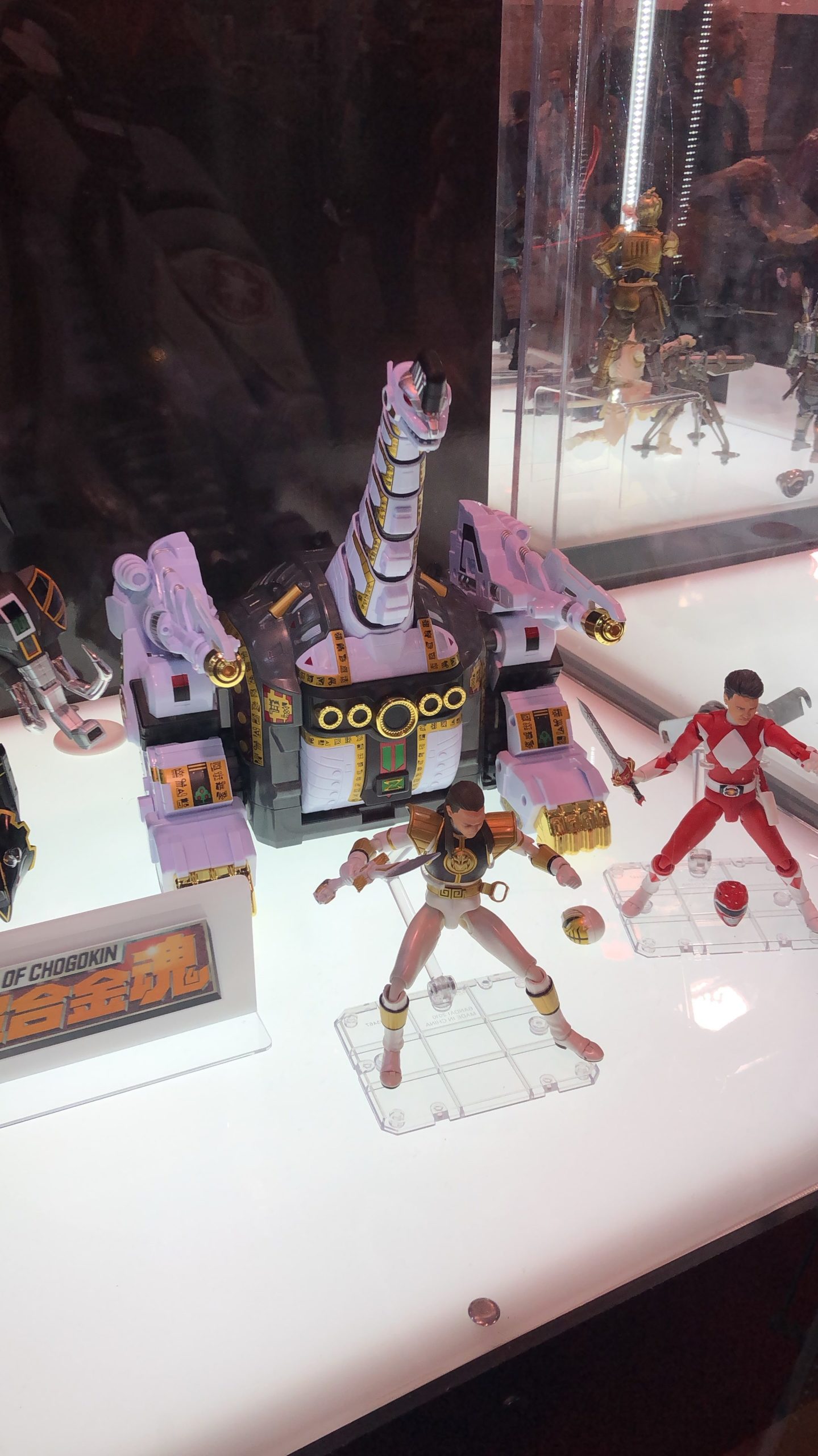 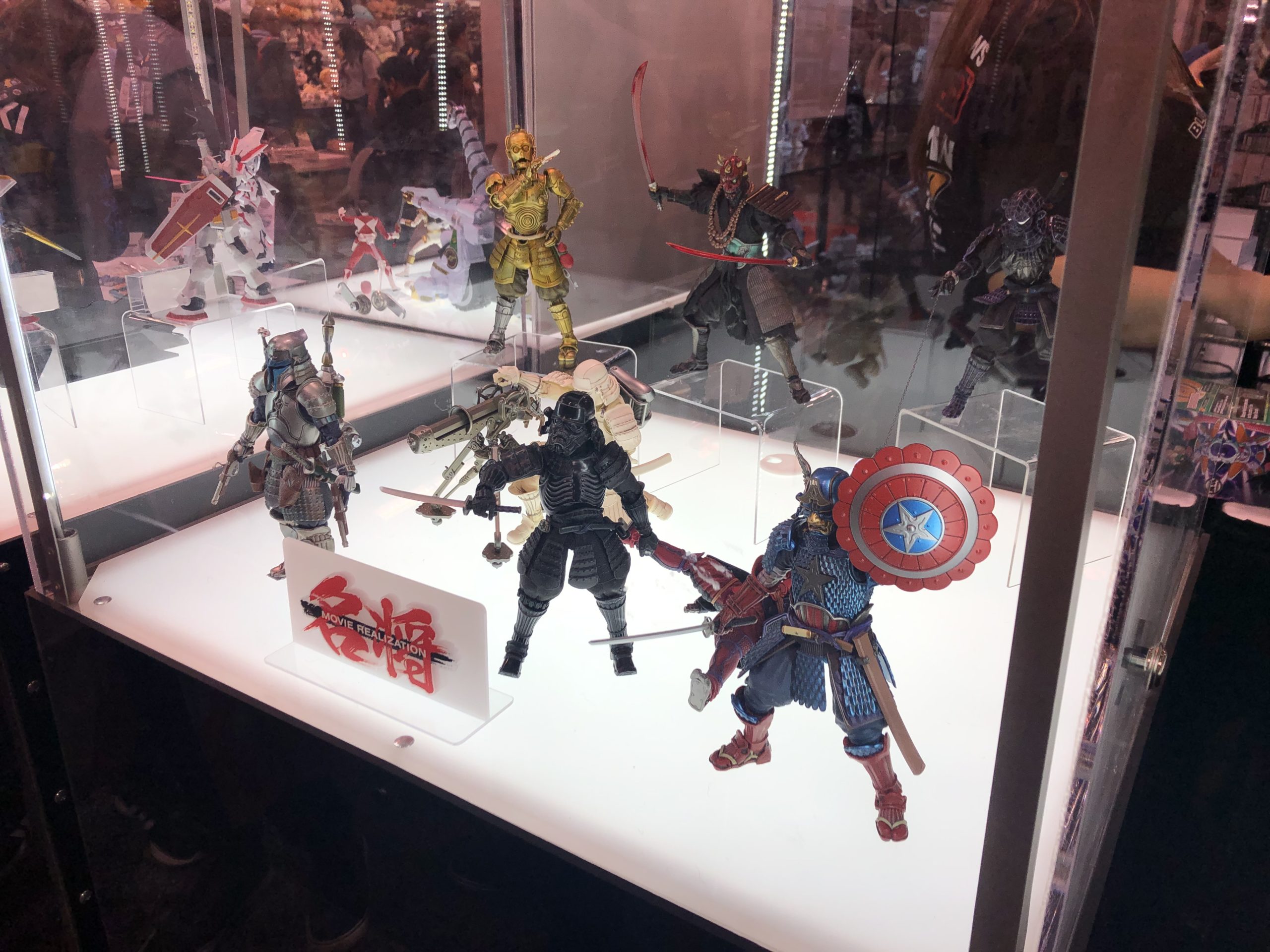 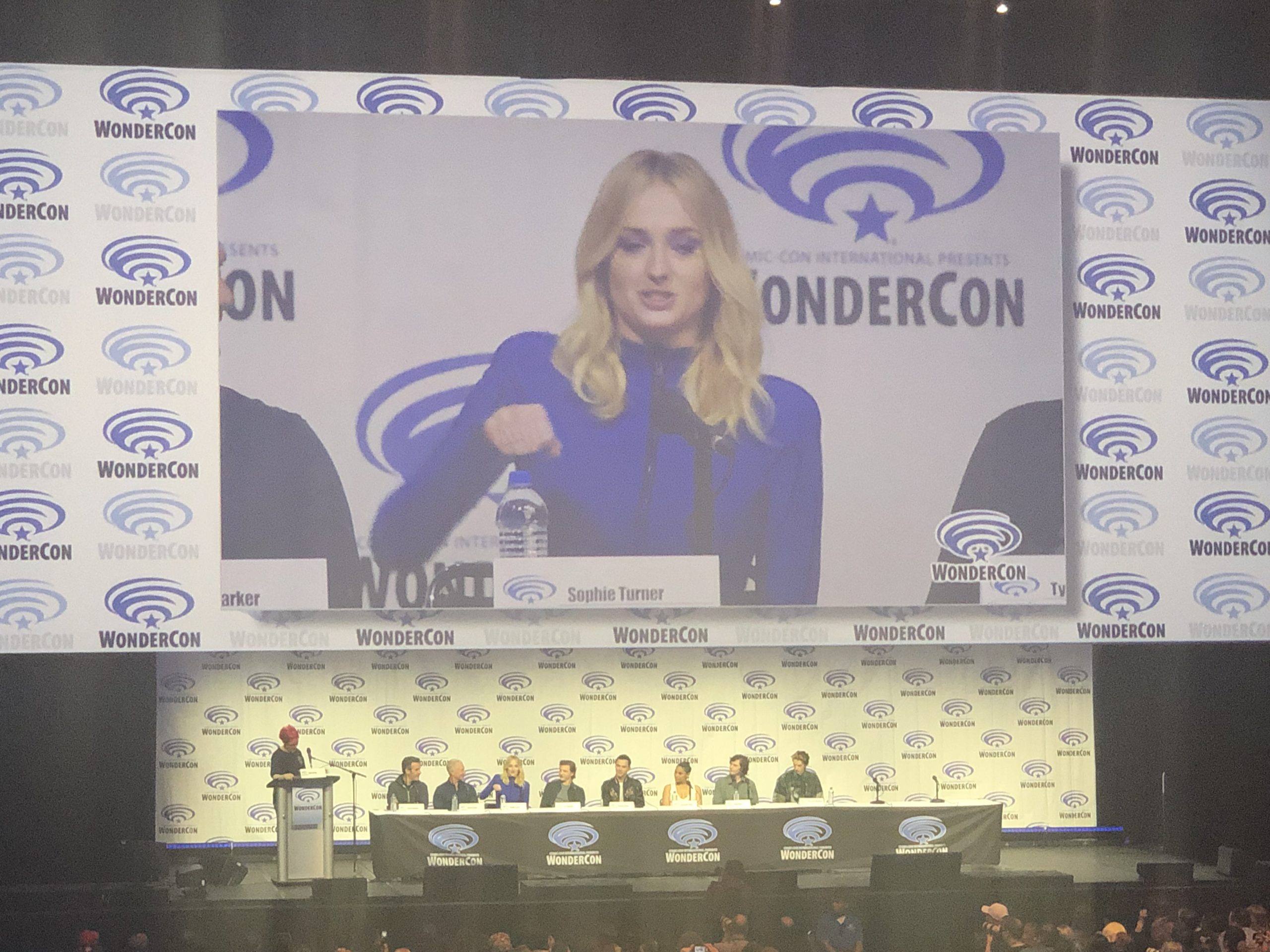 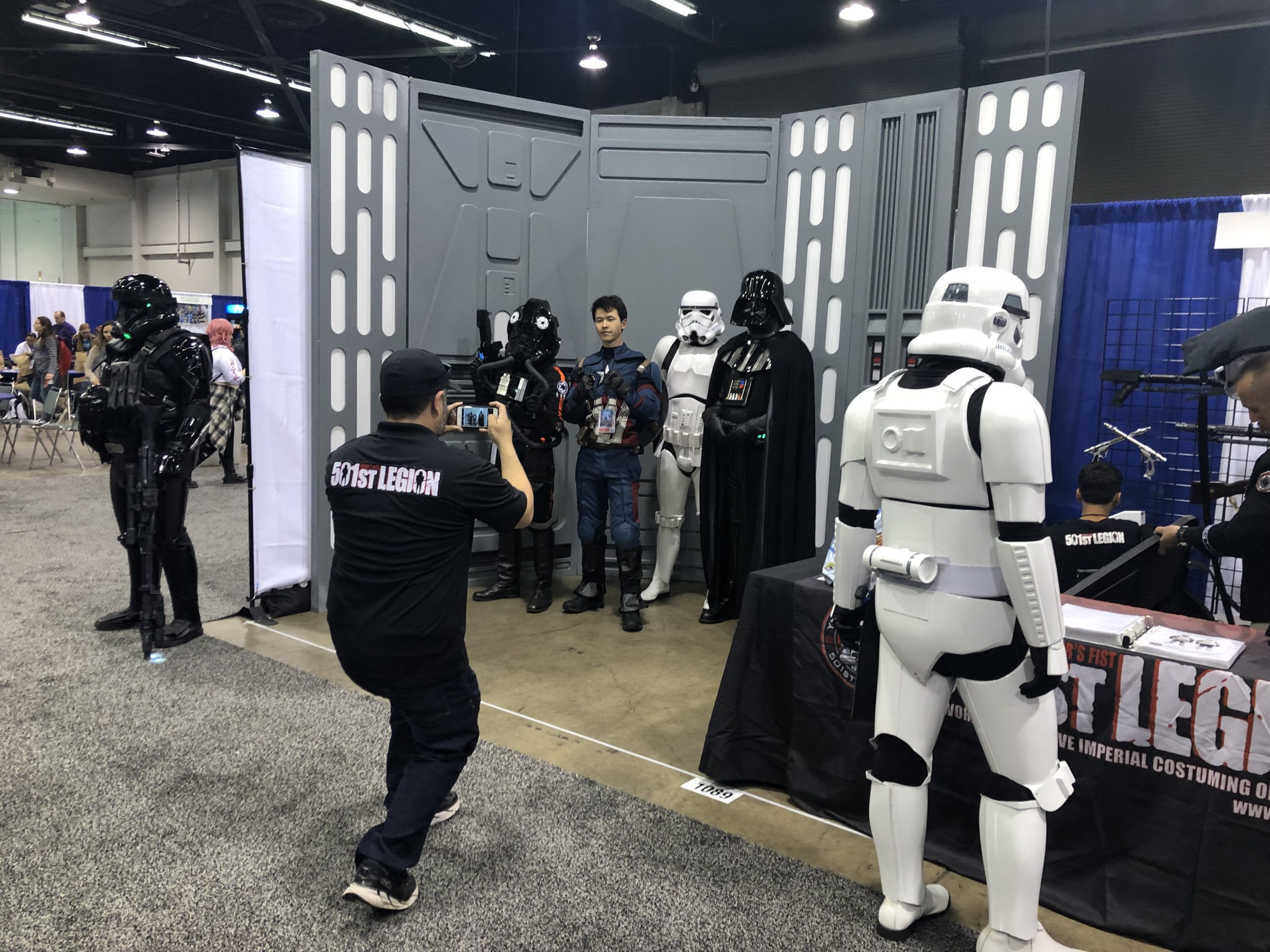