During WonderCon Anaheim weekend, a panel with the cast and crew of “Dark Phoenix” debuted new footage from the latest installment of the “X-Men” series.

Kinberg made several comparisons to “X-Men: The Last Stand” — a 2006 adaption of the Phoenix storyline. Believing comic fans have yet to truly experience Chris Claremont’s “Dark Phoenix Saga,” Kinberg appreciated how “Days of Future Past” retconned “X-Men” history, allowing for a more faithful version.

The director noted the MCU’s massive success primed audiences for intergalactic stories, and emphasized the cosmic elements of “Dark Phoenix.”

“It’s the first X-Men movie that goes into outer space,” he said, also adding the “X-Men: Apocalypse” sequel would be the first time an alien joins the mutants.

The cast were asked questions about their characters.

“They’re kind of fused together. It’s these two kind of separate entities fighting each other within one person’s body,” Turner said, on the differences between Jean and Phoenix. The “Game of Thrones” star mentioned focusing on schizophrenia and dissociative disorder to bring authenticity to the hybrid character.

Smit-McPhee, who plays Nightcrawler, confirmed another time jump between movies. “Jumping the decades you get to see a form of maturity in him that’s quite different from what I portrayed in ‘Apocalypse’,” he said. 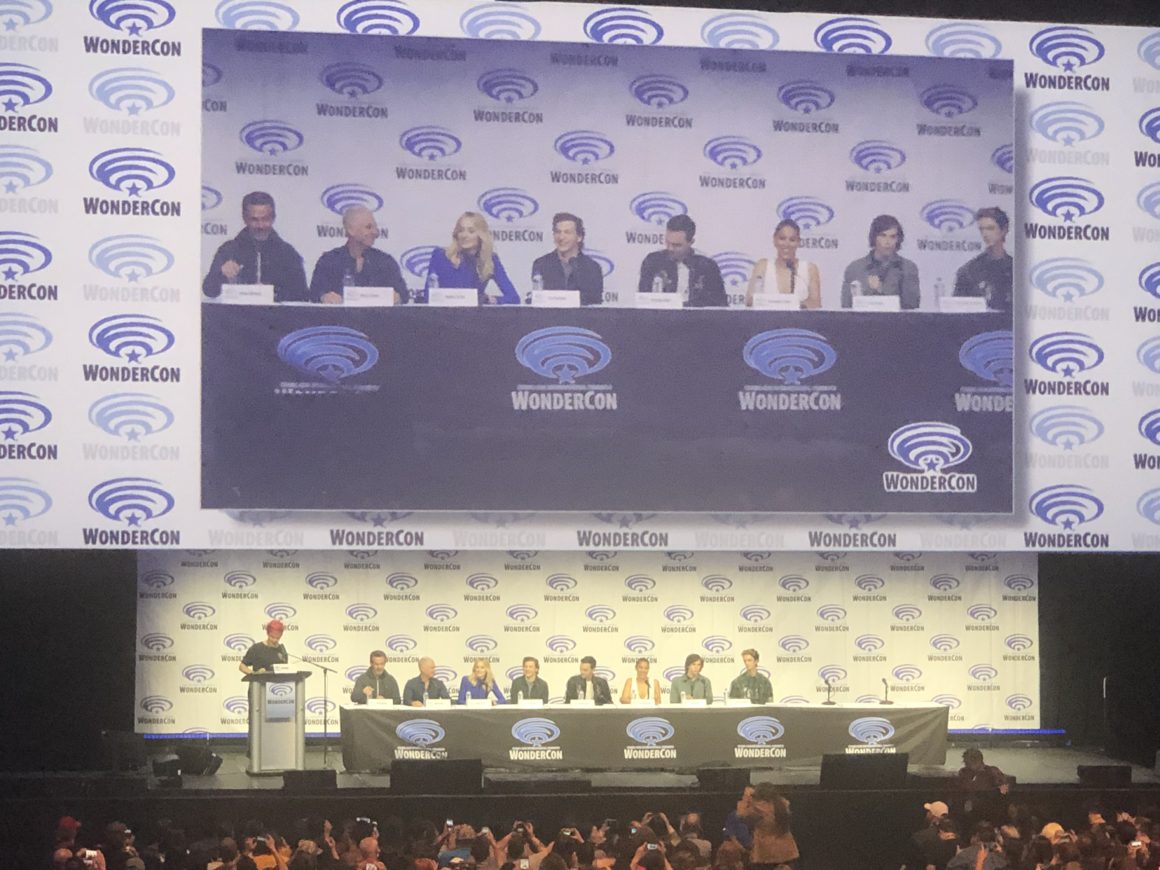 The following contains spoilers for two scenes in “Dark Phoenix.”

The audience was treated to two clips, with the first taking place early in the movie. During a rescue mission to save astronauts from a solar flare, the X-Men — Jean Grey, Nightcrawler, Cyclops (Sheridan), Beast (Hoult), Storm (Shipp), Quicksilver (Peters) and Mystique (Jennifer Lawrence) — fly into space aboard the Blackbird. The mission eventually goes awry when Jean is pressured by Xavier (James McAvoy), who is Earthbound, to board the rotating shuttle to save one straggler.

Jean agrees, allowing Nightcrawler to grab the astronaut — but he is unable to bring her back too. Trapped on the damaged craft, she is flung into the solar flare and seemly dies in a fiery explosion. Her motionless body is spotted after the flames clear and Nightcrawler brings her aboard the Blackbird. In Cyclop’s arms, Jean slowly regains consciousness, albeit with a red tint in her eyes.

The mutants are given a hero’s welcome on Earth; humans seem to idolize them compared to past movies. At the mansion, Mystique is troubled at Xavier’s insistence of putting mutants in danger for humans. She recommends he put himself in harm’s way next time, and shortly before the clip ends, declares the X-Men should be called “X-Women” because women were frequently saving the men — a line that received a loud reaction from the WonderCon audience.

The second scene is after the mutants have split into two camps: one fearful of Jean and the other maintaining faith in her. Nightcrawler transports Xavier, Cyclops, and Storm to New York City to find Jean. The group encounters Magneto (Michael Fassbender), Beast, and two mutants, who are intent on killing her.

A fight between the two factions ensues in the middle of a crowded street, with several mutants trying to prevent Magneto from reaching Jean. Eventually, he escapes the battle and pulls an underground, occupied train car into the building where Jean and Jessica Chastain’s character are waiting.

“That’s right,” Magneto admits, shortly before he sends a metal beam towards the young mutant. She stops it and retaliates by gradually crushing his helmet. As his eyes start filling with blood, the scene cuts to black.

By the end of the panel, “Dark Phoenix” had been strongly associated with “Logan” — an implication of the direction Kinberg and Parker want the movie to take.

Spider-Man swoops into Starbucks for morning...