How to build a $200 lightsaber at Star Wars: Galaxy’s Edge

Star Wars: Galaxy’s Edge, Disneyland’s biggest expansion ever, is allowing fans to make custom lightsabers. But unlike the build-your-own station in Tomorrowland, crafting one at Savi’s Workshop is immersive, theatrical and most notably, expensive. For $200, builders will receive the high-end souvenir along with a carrying case and an exclusive trading pin. Combined with the presentation, the lightsaber build is one of the most unique experiences at Disneyland.

Taking place on a First Order-occupied planet Batuu, Galaxy’s Edge offers an immersive show for visitors. Disney cast members, or Batuuans living during the sequel trilogy, don’t know what a lightsaber is nor do they speak of it. When asked for the “lightsaber store,” a Batuuan woman was ignorant but recommended Savi’s for “scrap.” The theatrics extend to the workshop itself. With the exception of a blue banner bearing a white sword, Savi’s gave no indication what was inside its weathered, beige walls.

However, once you are in line, the process is rather straightforward. Builders will be shown several themes to pick from, pay 200 “credits,” and receive a colored card and a trading pin in exchange. The card assigns a group of 28 together: 14 builders and 14 guests — the maximum capacity for Savi’s single room. The pin is displayed on builders’ clothes so cast members know which theme to grab. There are four options to pick from, each different from the next:

After a varying wait, a group is guided indoors where they’ll surround an oval, metal workstation divided into 14 sections — each having a holding area to set a hilt and a kyber crystal. After everyone is settled, the Gatherers — a group of relic collectors who bring their findings to Savi’s — will introduce themselves before the leader takes the center of the room.

In a rousing monologue, the leader will explain who the Gatherers are, the history of the lightsaber and its famous users. He or she is also responsible for a silly but somewhat magical moment: asking everyone to close their eyes for a surprise. Like meeting a costumed character, there is a certain willingness Disneyland guests must possess to fully appreciate the amusement park.

Builders who comply will discover a Gatherer silently appear before them bearing a container of glowing blue, green, red and purple kyber crystals (yellow and white can be only found at Dok-Ondar’s Den of Antiquities). Mentioned in the “Star Wars” franchise, the crystals power lightsabers and Imperial weapons. In Savi’s Workshop, they determine the color and sound of the blades.

After crystal selection, trays containing the hilt pieces are pulled based on what pins are worn. And finally, the real fun begins. Separated into steps, the build process is relatively simple. Builders start by placing their kyber crystal inside a plastic hilt that acts as a skeleton for the whole lightsaber. Then they select the required amount of part types during each sequential step. In order, the build involves picking:

Every combination of part types can be selected, meaning vast possibilities for each theme. But builders hoping to change their hilt’s look later should be warned: unused parts are not included and returns are not allowed, which means buyer’s remorse is a strong possibility. Thankfully, the parts use die-cast metal and high-quality plastic, so disappointment won’t stem from quality. A completed hilt easily weighs several pounds and will feel better in hand than most lightsabers found through third parties.

Once everyone is done building, the leader will ask the group to place their hilts onto the workstation and to step back. A Gatherer will attach each hilt into each workstation divider shortly before everyone moves up. In another magical moment, builders are then urged to ignite their lightsabers in unison. As they do, the dividers will open up and reveal 14 glowing blades. No doubt even an uninterested observer will awe at the colorful illumination of Savi’s dimly-lit room as builders wave their creations around. 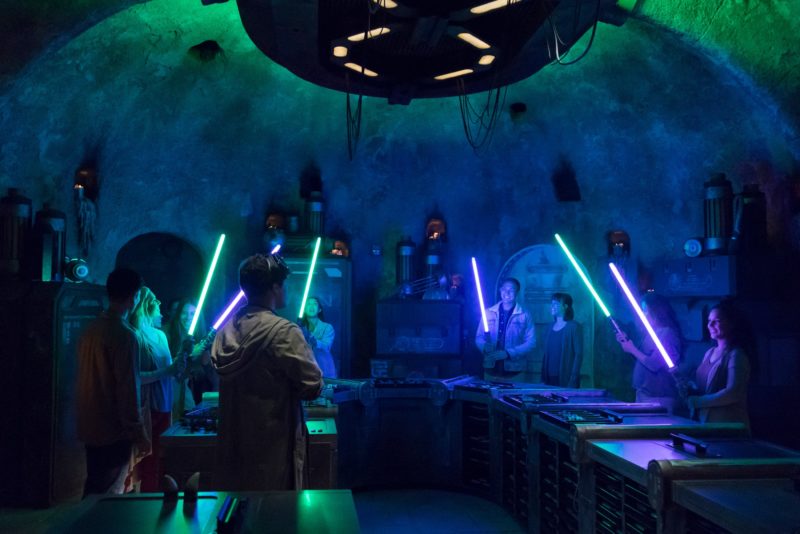 The overall process of building a custom lightsaber is immersive and personal but definitely caters to a niche audience. From a practical standpoint, a lightsaber from Galaxy’s Edge is like one from anywhere else, serving little function beyond lights and sounds. So for many visitors, the $200 price tag and the possible lengthy wait won’t be worth it. But in hindsight, considering Savi’s limited capacity, building a high-end lightsaber was never designed for the masses. Like any religious experience, it’s meant for believers. And if faith is strong, owning one shouldn’t be a hard decision.