Dollface Is a Pale Imitation of Feminism

In the first episode of Dollface, Jules (Kat Dennings) is rudely dumped by her boyfriend, Jeremy (Connor Hines), and left emotionally flailing. The show seems to want us to think that Jules was naive to be absorbed by her relationship and lose touch with her female friends, that she was foolish to be unprepared for this inevitable breakup, and that circumstances will now force her to regain a sense of perspective.

I suspected when I started watching Dollface that I wasn’t its primary intended audience. Besides being Asian and bisexual, I find the idea of lovers and friends being gender-specific groups bizarre. However, I’m interested in the concept of women having a hard time being friends with other women as a result of internalized misogyny—that’s something I used to struggle with and that I’d hoped would be explored in Dollface. (It wasn’t.)

I’d also hoped for decent Asian representation. Dollface notably features two women of Asian descent as a whopping half of the friend group supporting Jules after her breakup, specifically Madison (Brenda Song) and Stella (Shay Mitchell). On paper, that’s a big deal. Unfortunately, while Song and Mitchell work admirably with the amount of character they’re each given, it seems like Madison and Stella mainly exist to distract from and accommodate the show’s white feminist vibe.

Madison, who resents Jules for neglecting her and is critical of her friend’s desire for a serious relationship, comes across as not just shallow but petty and bitter. Stella presents as the stereotypical “hot” girl, but we’re supposed to believe she’s not actually like that because she wants to go to business school. We don’t find out much about Stella aside from the fact that, like Madison, she’s set on avoiding romantic commitment. Stella and Madison are more assertive than their white friends, but they’re also sexualized stereotypes who seem positioned to make Jules look “relatable” by comparison, and complex by default. 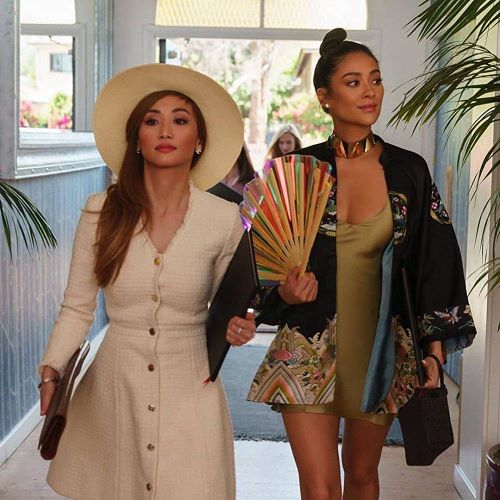 My disgust culminated at the point when Izzy (Esther Povitsky), an awkward white woman and the fourth member of the group, complains about her lack of opportunities for sexual experimentation. Stella responds by kissing her on the mouth. In Dollface, queerness is a prop for straight women to measure their sexual insecurities against, just as Asian women are a prop with which white women do the same, even if not as egregiously. It’s worth considering that Asian and queer women are already sexualized by society, which leaves us vulnerable to harassment and abuse. Contributing to this phenomenon is only feminist in the insular world Dollface invents for itself.

I was all the more disappointed because the setup of the show is ripe to address issues of race and privilege, which belong in any real discussion about feminism. That Madison and Stella, who are living quite privileged lives, still struggle with self-image and relationships more than Jules could be an interesting angle to explore. The thing is, these women aren’t doomed characters. They can be fun and funny, while also maintaining a considerable amount of depth. They come across as shallow simply because we know so little about them. That’s true of everyone on the show, but this hurts Madison and Stella much more than it hurts Jules, whose “regular” white girl image is set in sharp relief by her chaotic non-white friends.

More than anything, Dollface suffers from neglect. It whips the idea of female solidarity around recklessly, but refuses to actually grapple with it. If a second season happens, the creators owe it to women—not just straight white women—to do better.

‘Son of Zorn’: Fox, please don’t cancel this one.

10 Facts to know about the Black Panther