It’s been a long time coming, but it looks like we’re finally going to see Starbound completed and officially released.  Chances are if you’re a PC gamer you’ve already heard about the sandbox space-exploration themed game and perhaps even played an early build.  For those who may not be aware, Starbound was released into an early access open beta (that’s an unfinished pre-build where the developer amends the game based on feedback from anyone who purchases the early copy, for any gaming noobies) in late 2013 and has received a good deal of attention and praise.

Speaking from experience, this is a pretty great game despite what felt like a long and sometimes seemingly-negligent production cycle.  While indie developer Chucklefish Games claims to have been refining Starbound on a regular basis, they’ve publicly focused more attention on fully releasing two other hit titles, Risk of Rain and the recent Stardew Valley.  While I’ve enjoyed playing the early builds, I did fall away from it after a year or so given what looked like apathy from the developer.  Item descriptions were missing for months, the quest and tutorial systems were all over the map, and multiplayer was a virtual nightmare if you weren’t particularly tech-savvy.  Despite this, the game was quite addicting and just a joy in which to immerse myself.

So, what is Starbound?  Well, up to this point it’s basically “2D Minecraft meets Star Trek” or “Terraria in Space!”  Honestly, I’m not sure how they weren’t sued by Re-Logic – developers of Terraria.  Well, basically you are a spacefaring adventurer of a human or alien race of your choice exploring the galaxy, collecting nifty artifacts, building whatever your heart desires, and fighting lots of birds…

I hear they fixed the angry birds problem (heh-heh), but since I decided in late 2014 not to play again until initial launch I still have PBASD: Post-Bird-Attack Stress Disorder.  Like Minecraft or Terraria, Starbound is very freeform and really is fueled more by curiosity and personal desire than any linear story.  Explore where you want, when you want, how you want…just not too close to the birds.  And did I mention the phenomenal soundtrack by Curtis Schweitzer and Solatrus?  If you haven’t yet, I cannot recommend enough that you purchase the game with the original soundtrack album.  Almost six full hours of musical bliss. 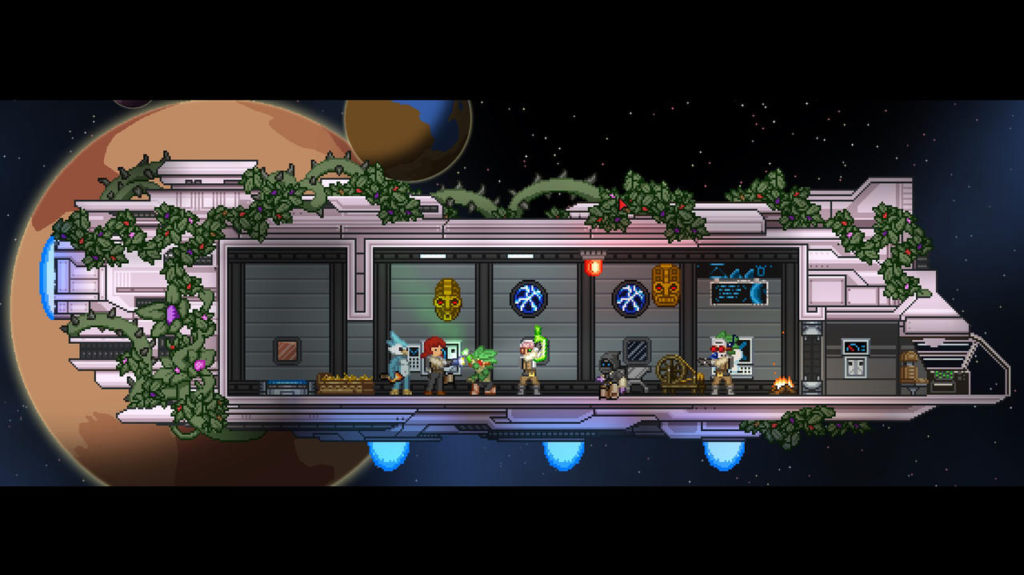 Now imagine what this will be like as a finished product.  While the release date is not set, Chucklefish has finally announced that the next update to the game will be the big 1.0 final product.  This is good news for PC and console gamers alike given the full release is coming to Xbox One, PlayStation 4, PlayStation Vita and will support Windows, Mac, and Linux on PCs.  The official development blog claims that a lot of incredible pieces are coming together for this “final” release including a fully-fleshed out story, revamped side-quests, more self-aware NPCs, crew members, mercenaries, ship upgrades, fossils, combat updates, easier-to-access multiplayer, and so much more.  (Check out the full dev blog at the end of this article.)

I may have some mixed feelings about the story components, though Chucklefish claims it won’t impact sandbox exploration too much and will act more like a through-line for the universe.  Overall I am a little concerned it will make Starbound feel a bit more confined than it originally did, but honestly I’m just happy to see it finished.  It has been in early access beta for three years now and – while it has notably improved – has had a long way to go for a long time.  If the story is good, we may have a new indie classic on our hands.  If it hinders the game, at least we have Hello Games’ No Man’s Sky also releasing this year.  See you in space!

Will you be taking to the skies in Starbound?  Let us know in the comments below!

The Dreaming: Waking Hours—Who is Ruin?