With the launch of HBO Max this week, I feel it’s an appropriate time to speculate on how the new streaming service will be received by fans and consumers, as well as what my gut is telling me in regards to the effect the Snyder Cut will have on its subscribers.

During the months leading up to the launch of HBO Max, many of the conversations around the subscription service have been about its “premium price point” at $14.99/month. However, while Netflix’s lowest price is $8.99/month for a single stream at a time, in non-HD quality, their highest tier is $15.99/month for up to 4 simultaneous streams in HD/Ultra HD, and a middle-tier at $12.99/month offers 2 HD streams. For 3 streams on HBO Max, consumers must pay $14.99/month, which I must admit is a competitive price in comparison to the more established offerings in the marketplace. 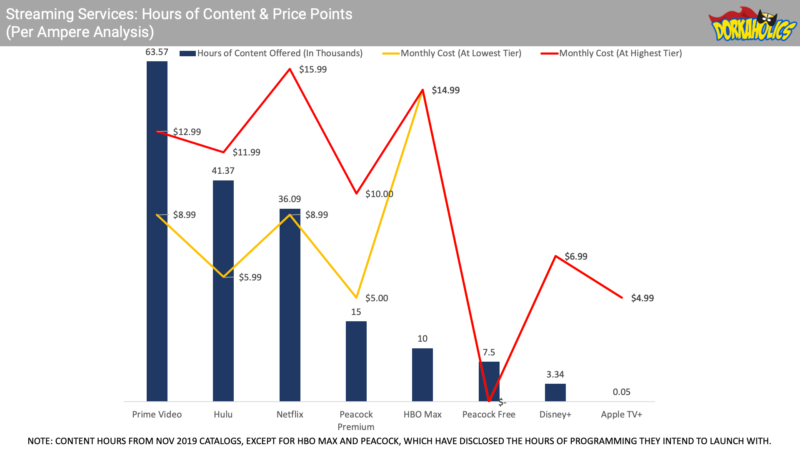 Comparing the hours of content with price points across the different streaming services including HBO Max. Photo: Neil Bui

An interesting topic that I feel hasn’t received enough discussion when it comes to talking about the “streaming wars” are the hours of content offered by each of the services. It should be little surprise that Prime, Hulu, and Netflix have the largest libraries available at over 63,000 hours, 41,000 hours, and 36,000 hours, respectively. In comparison, HBO Max’s library is launching with 10,000 hours. That’s still a lot, don’t get me wrong. If you were to leave the app running 24/7, 365, you’d only cover 87.6% of that amount (8,760 hours). When we looked at some of the other services in the most recent “cohort of streamers,” Disney+ launched with 3,340 hours and Apple TV+ launched with 500 hours. And while Apple TV+ features the smallest amount of content, we also need to take into account that their $4.99/month subscription is free for 1 year with the purchase of a new Apple device, positioning it differently than the others (I like to think of it as a bonus/nice to have to incentivize consumers towards their main offerings, similar to Amazon’s Prime membership offering free access to Prime Video).

Disney+ is really interesting. At $6.99/month, it sounds competitively affordable. But with such a small library, if you were to compare the price points to the hours of content, you’d notice the huge gaps for HBO Max and Disney+. What I’m getting at here is the idea that Disney+ fills that gap with the sheer value of their brand. When I think of Disney, I think of more than just the Star Wars and Marvel franchises — I’m thinking about the classic animated films that I grew up with. And the fact that there are a number of films that I’ve seen in the last 10 years and can rewatch now, just drives home the point that Disney is a brand that families can turn to for a long-lasting quality content that will have an appeal for everyone. They’ve certainly been able to diversify with National Geographic and the acquisitions from Fox. And the results speak for themselves. Since its launch in November 2019, Disney + has already reached 50 million subscribers and counting. 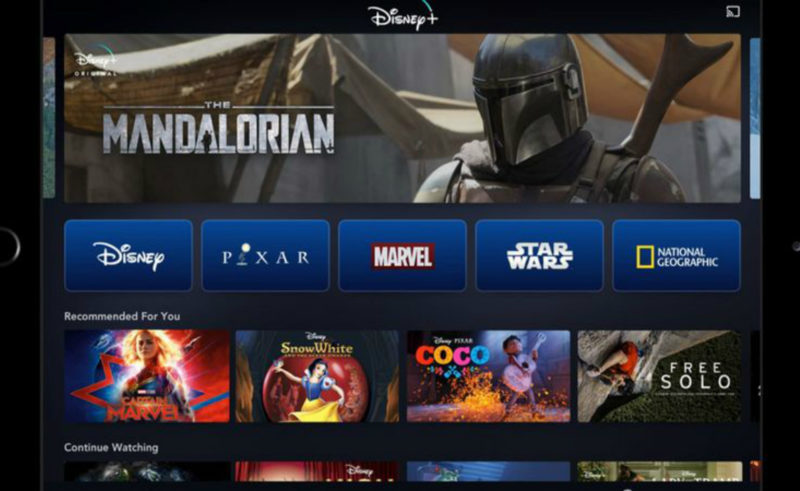 So now based on the undeniable success of Disney+, I ask the question: will HBO Max experience similar favorable odds? To break this down a bit more, I will start with the value of the HBO brand itself. Without a doubt, I believe that the brand in HBO, Warner, DC, Harry Potter, and the other properties within AT&T’s entertainment entities can support and justify $14.99/month. To go back to comparing it with Netflix, Matthew Ball says it best: “As many hits as Netflix, but 80% fewer shows.” This is a testament to their effectiveness and efficiency in selecting the right projects to inject with capital and bring to life for audiences. And those decision-making abilities are what will help guide the new content offerings that will make HBO Max even more competitive.

Before HBO Max launches, it's worth spending some time to understand how truly, truly great HBO is at making content.

Disney+’s breakout series was The Mandalorian, which made its mark on pop culture with Baby Yoda capturing the attention of everyone who was even remotely aware of the Star Wars franchise. I believe Zack Snyder’s Justice League will be the same for HBO Max. It’s said that the director’s cut of that film will require up to $30 million to cover the necessary post-production to bring his vision to life. With a price point of $14.99/month, 2 million subscribers would basically cover the costs of that film in one month. What did I say early? Efficiency and effectiveness. Disney+ has already crossed 50 million in less than 6 months. While I can’t speak to whether or not as many consumers will decide to subscribe to HBO Max, it’s clear that with their higher price point, they can achieve success in their own path with different expectations and goals in mind for subscribers.

PS: Any thoughts, comments, disagreements, additions, ideas – please email hello at dorkaholics dot com and I will make updates. All content should be living, after all.

Why ‘Tokyo Vice’ Should Be On Your Watchlist This Month