I’m Not Saying Jessica Jones Should Have Been Asian, But…

As is often the case for Asian people and other people of color, I’ve been asked this a lot. So hearing Jessica Jones (Krysten Ritter), a white Marvel character, say it in the second season of the series bearing her name was weird, to say the least.

She follows up, in the same beleaguered tone, with, “How did you end up like this? Are you gonna kill me?”

Jessica isn’t asking these questions of someone else, but grumpily recounting things she has heard to Oscar Arocho (J.R. Ramirez).

“It comes up,” Jessica replies, her voice weathered with bitterness, before—in her trademark way—downing bourbon from a ridiculously large glass.

What’s being discussed here, of course, is Jessica’s superpowers, her capacity to lift cars and bust down doors. If this scene bears any similarities to something that might actually happen, hey, it’s a metaphor! The premise of unusual abilities has allowed many a white fictional character to give off persecuted vibes while being considered acceptable for mainstream American entertainment. Superpowers, especially ones acquired in a tragedy, are understood to make for sympathetic, inspiring fiction in a way that actual marginalization is not.

But it gets complicated because the Jessica Jones television series established a kind of autonomy for women, and victims of abuse, that in TV is still often reserved for men. Jessica has a traumatic past and a messed-up family history and an obvious sexuality and a cool gritty job as a private eye that she’s good at and anger issues and the ability to frequently look tired. Despite the show’s flaws, and there are many, it’s refreshing.

Maybe this is why that “What are you?” moment brought me too close to Jessica’s world. I could already relate to her, and it stuck me into the narrative as myself with my Asianness—because I am Asian, though this would make sense from many non-white perspectives—in a way I didn’t want but couldn’t unsee. 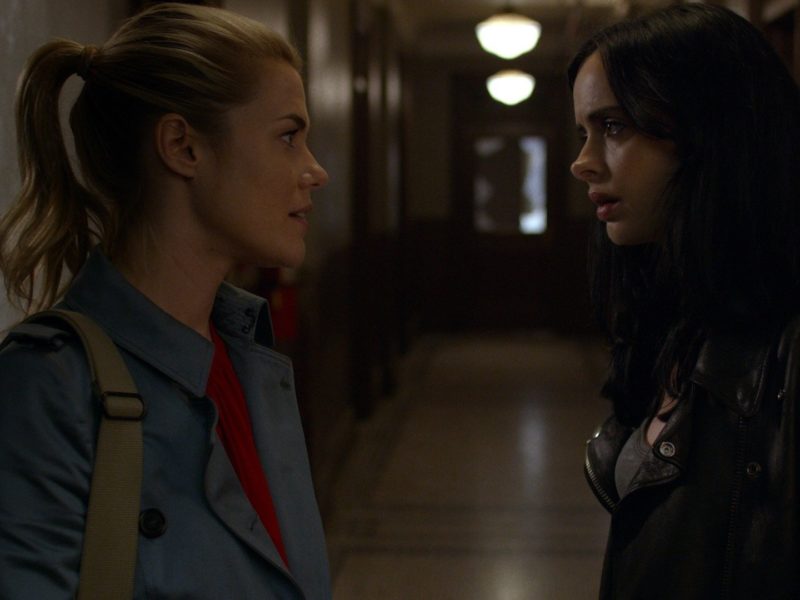 Let’s get into it. Jessica, a superpowered individual, was adopted by a “normal” family. Trish (Rachael Taylor), Jessica’s “normal” sister, is jealous of Jessica’s powers and thinks she, Trish, would make better use of them. Jessica feels her powers are a burden, but they link her to her biological family and history, both of which she’s lost touch with and lacks crucial details regarding. Trish is critical of how Jessica chooses to deal with her past, and she doesn’t seem to see Jessica’s powers as having shaped her, but rather as something she has and can use. I could go on, but do I need to?

I can’t personally relate to Jessica’s adoption, but that she was adopted by what I can only describe as an extremely white family makes it all the more apparent that she is also white, and that this is somehow wrong. Not for the character, but for the story developing around her, which rushes headlong towards tragedy and an aggravating lesson about the hazards of white feminism—courtesy of Trish—that literally no one asked for or needed. (Not with actual Trishes to deal with in real life.)

But after this and what Iron Fist put us through, Colleen Wing (Jessica Henwick) should, at the very least, get her own spinoff.