Located at the back of Star Wars: Galaxy’s Edge, the life-sized Falcon greets visitors as they approach the mountainside entrance. The spaceport-themed queue is lengthy but features props and Disney’s audio-animatronics to entertain aspiring smugglers as they progress through the line.

Following a gradually elevating path that zigzags and wraps around the Falcon’s rear, visitors are awarded a top view of the ship. Keen eyes will notice the Disney Imagineers designed the queue’s various ships, catwalks and containers to have a worn, gritty aesthetic to feel authentic to the Star Wars universe.

Visitors will eventually reach the interior of the Falcon, which cleverly serves as a waiting room. It is an exact recreation, complete with every detail Star Wars fans are familiar with, though buttons and switches don’t produce any notable effect. Accompanying the iconic “chess” table and ring corridors are Disney cast members, who hand out cards that assign the positions of gunner, pilot and engineer. After a short wait, a group will be ushered into a corridor, where a video will play and explain the premise. 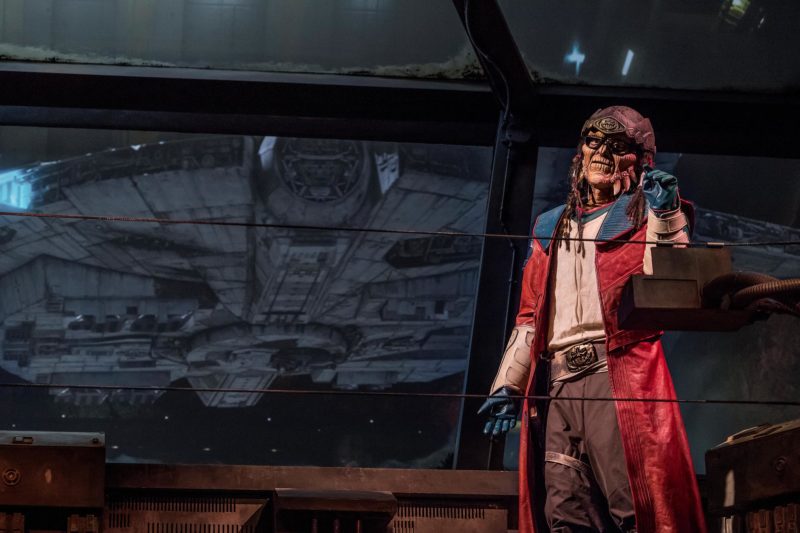 Set during the sequel trilogy, Smuggler’s Run tasks crews to work for Hondo Ohnaka, a space pirate operating Ohnaka Transport Solutions on the planet Batuu. Striking a deal with Chewbacca to borrow the Falcon, Hondo joins six smugglers as they attempt to steal valuable coaxium containers.

Having ridden the attraction in each position, it’s clear Smuggler’s Run will draw comparisons to Star Tours, the original Disneyland Star Wars attraction. Both offer rich video presentations and engaging seat movement, but while Star Tours is a passive and dynamic experience, Smuggler’s Run thrives on interaction and intimacy. As soon as every smuggler is seated, the cockpit door closes and the screen lights up, creating an experience where the focus is on a galaxy far, far away and nothing else.

If Star Tours varies, Smuggler’s Run is consistent: during each ride, the Falcon departs Black Spire Outpost, travels using hyperspeed, chases and collects the loot from a train, then returns home where Hondo announces the crew’s take. The difference between trips is the crew’s success, which alters the ending.

Thankfully, controls aren’t too complicated. From the front, two pilots steer the Falcon: the left position controls side-to-side movement while the right controls up and down and the classic hyperspace levers. Behind, gunners are tasked with shooting down targets and can choose between an automatic or manual firing mode. From the back, engineers repair any possible damage. Both positions utilize buttons on side walls, an awkward design choice since the action is in the front. But considering the overall joyful experience, from the detailed queue to the immersive minutes of “Star Wars” escapism, the issue is minor in comparison.

Smuggler’s Run will be the sole attraction when Galaxy’s Edge opens at Disneyland on May 31 and Walt Disney World on Aug. 29. Star Wars: Rise of the Resistance, which features a battle between the First Order and the Resistance, is scheduled to premiere sometime later in 2019.

5 Classic Anime Series To Get...