Atlantics, at Once Transparent and Reflective, Offers Hidden Depths

Earlier this year, Mati Diop took home the Cannes Grand Prix with her Senegalese Wolof-language film Atlantics, which is now available on U.S. Netflix. Diop is the first black woman to submit a film at the festival. She received the award alongside Korean director Bong Joon-ho and his Palme d’Or winner Parasite.

While this fact is significant, it seems Diop herself may be entirely over it, and who can blame her? Framing representation primarily as a prize puts pressure on the marginalized person supposed to be represented while also encouraging a one-dimensional view of who they are. Referring to her mixed-race heritage, Diop, who is French-Senegalese on her father’s side, told the Guardian, “There’s always a visible and invisible side of you; there’s a place you inhabit and place you desert. How does the place that you don’t live in influence you?”

As someone who grew up in the U.S. with a Korean father, this is something I think about often. Maybe because of this, I find it especially interesting that Atlantics, despite Diop’s background, doesn’t show a character casting their gaze inwards towards the heritage of an immigrant parent. Instead, it shows an outward gaze from the homeland. We first see this in a character named Souleiman (Ibrahima Traoré) as he stares out across a vast expanse of sea. “You’re just looking at the ocean,” his girlfriend Ada (Mama Sané) complains, “You’re not even looking at me.” 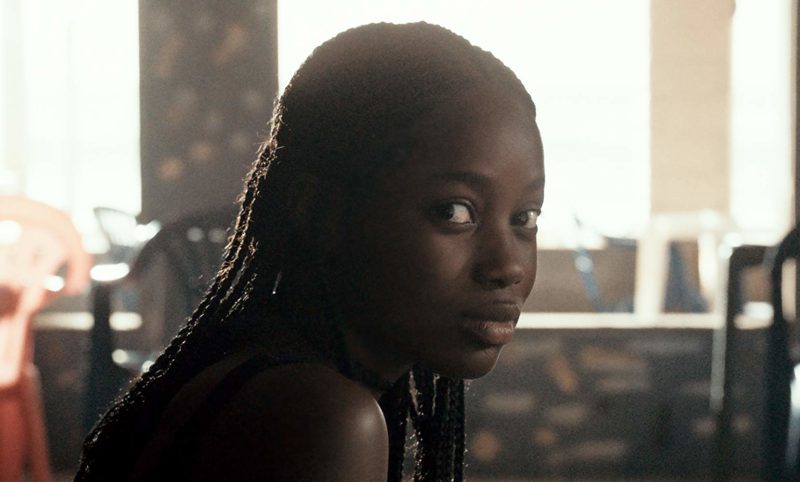 Souleiman, a poor construction worker who hasn’t been paid for his labor in months, may be the object of Ada’s affections, but she’s engaged to another man, Omar (Babacar Sylla). When Souleiman disappears, setting out in a boat for Spain with his fellow employees, Ada’s resistance to marrying Omar only intensifies, which drives a rift between her and her parents.

In the meantime, mysterious events begin occurring. The marital bed in Omar’s house catches fire; someone claims to have seen Souleiman nearby. When a police investigator questions Ada about the fire, he begins sweating profusely and feels so ill that he has to end the interrogation. Local women become possessed, presumably by the ghosts of the men lost at sea, and band together to seek retribution from deadbeat employer Mr. Ndiaye (Diankou Sembene).

While the film addresses issues of inequality within a framework of romance, it’s ultimately about Ada. On the surface, it may appear that her story revolves around Souleiman, but this is challenged by the irreality of the movie’s universe, where plausible events turn out to be dreams and mirrors show us details that contradict what we see elsewhere. Atlantics’ disruptive, haunting aesthetic, helped along by sweeping shots of the ocean and a quivering, otherworldly soundtrack, furthers the idea that we can’t trust what might seem obvious at first glance.

In the last scene, Ada turns towards the camera. She’s looking at herself in a mirror, but also possibly at the audience, or maybe through us. Whether or not she’s really looking at us, we’re definitely looking at her—unlike Souleiman at the beginning of the film. In this moment, Ada becomes sharply visible in a way that may make us question whether we know her as well as we thought, along with how we’ve perceived the events of the movie and her role in them.

Atlantics is like a photo negative of both a love story and a tale of immigration. Within its boundaries, the focus is on the person who stayed, the person who was left, and what she does with her dreams and fantasies.

5 Anime You Must Watch on Netflix Today – Nov 2020 Edition