Like many popular manga stories, Komi Can’t Communicate takes place in a high school setting but it stands out by doing something not commonly seen – its story explores social awkwardness and fitting in.

The first main character is Hitohito Tadano, an awkward, timid boy whose high school goal is to blend in and avoid attention. Tadano has somehow made it into the elite prep school Itan Private High.

His awkward experiences in middle school have led him to believe that fitting in and not standing out are the secrets to happiness.

And the other primary character is our titular protagonist, Shoko Komi, the iconic beauty of their elite school. On the first day of school, Tadano tries to say hi to Komi, but she comes off as cold and distant. He doesn’t immediately realize she has a communication disorder.

The term “communication disorder” describes a cluster of symptoms that cause people to experience difficulty interacting with others. Those suffering from this disorder may appear unfriendly. But the truth is… that while they may appear standoffish… they actually want to have relationships.

Creator Tomohito Oda does a great job of illustrating the expressions of discomfort for Komi that convey her true feelings to the reader and matches the story’s situation with surrounding characters.

Komi quickly shows that she is most comfortable writing on the chalkboard to communicate, such as for class introductions or her first conversation with Tadano.

A quick round of applause for the person who had to provide translations for the English adaptation by altering the artwork with the white text on the black inked chalkboards to feature English words written instead.

And almost immediately, a completely different side of Komi is shown – one that is eager to make friends just as much as Tadano. And upon learning this, Tadano makes his declaration:

“My goal is to cure her communication disorder and help her make 99 more friends.” 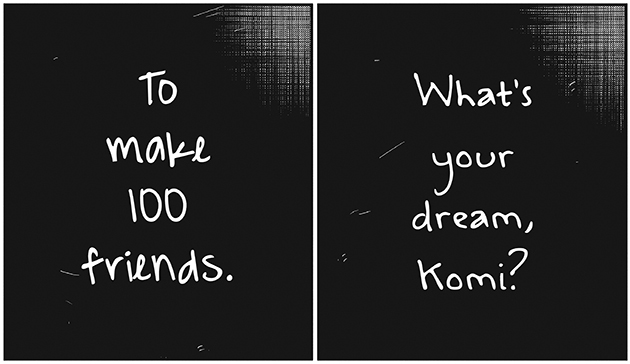 Throughout the first volume (which is what I read), Tadano successfully helps Komi make two more friends – his childhood friend, popular Nijima Osana who is friends with practically everyone, and Himiko Agari, a girl who struggles with her interpersonal relationships.

As soon as I had picked up this volume of Komi Can’t Communicate, I couldn’t stop until I had finished the book. Simply put, this was a story I hadn’t encountered in fiction before, yet it had felt very familiar to me based on my personal life. I found each of these characters extremely relatable and I’m sure anyone would too, just be reminiscing upon personal high school experiences. These characters touch upon anxiety, social awkwardness, inability to speak at times, having to overcome fears of public speaking, all within a high school story.

As the first volume wraps up, not only does Komi make new friends, but the plotlines include elections for class representatives, playing games with classmates, and getting her first flip phone. She never owned a phone before simply because she had no use for one, but now that she’s making friends, she’d like to be able to stay in touch even when they’re at school. 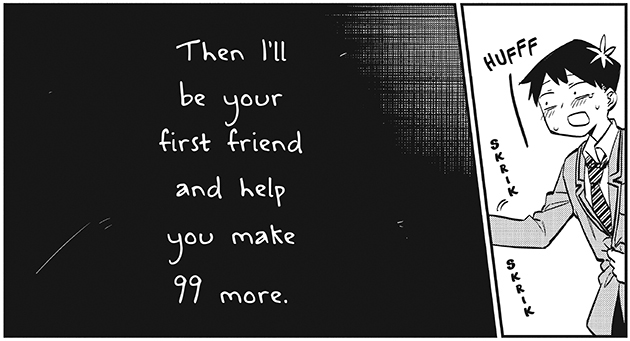 There are currently 17 volumes of Komi Can’t Communicate out in Japan, with the first 10 released in English so far. If that isn’t enough to convince you to give this successful series a try, then I don’t know what will. But I’ll do my best to highlight its traits:

Story: I can’t say this enough: the story is fresh, original, and keeps your attention.

Art: Writer and artist Tomohito Oda has a great range in his artistic talents, he’s able to create a wide range of expressions that capture the intricacies of high school life.

Characters: The characters can be slight exaggerations at times, but are individuals who are consistent in their personalities, making them easy to like.

Bonus: Word on the street is that this series is full of meme-able moments, so if you want to stay up to date with the online anime community, this series is worth your time.

Click here to purchase your own first volume of Komi Can’t Communicate.

Agents of SHIELD S01E19 “The Only Light In The Darkness” Clips