Why I, a Korean American, Relate So Hard to My ID Is Gangnam Beauty

In My ID Is Gangnam Beauty, a 2018 South Korean romantic drama series based on a webtoon, Kang Mi-rae (Im Soo-hyang), a girl who was bullied for her looks as a child, decides to have substantial plastic surgery before going to college. As it turns out, though, one of Mi-rae’s university classmates, Do Kyung-seok (Cha Eun-woo), went to the same middle school as she did. This revelation proves to be problematic for a few different reasons. Not only could Kyung-seok reveal Mi-rae’s secret procedure to others, but there is also the fact that he’s a handsome loner who considers himself above the kind of lookism that made her feel compelled to have surgery in the first place. To make matters even more complicated—surprise, surprise—he and Mi-rae might like each other.

I know that cosmetic surgery occupies a specific place in modern South Korean society, and it wouldn’t have occurred to me that I, being biracial and Korean American, would have any special reaction to a story that explored factors surrounding it. But when I discovered My ID Is Gangnam Beauty last year, Mi-rae’s story touched some deep sadness inside me. I watched it slowly, over the course of several weeks, late at night in front of my laptop, unable to take in too much at once but continually craving more. During this period, I would often find myself quietly reflecting on my own childhood and adolescence with unusual clarity.

I eventually realized that what had hit me so hard was Mi-rae’s reason for getting surgery: She doesn’t want to be beautiful. She wants to be normal.

I was bullied and isolated as a child, too, not for being ugly but for being Asian—though I felt at the time that this amounted to the same thing. I can relate not only to Mi-rae’s wish to blend in and live a normal life but to how she finds that her change in image and location only causes new problems. It turns out that her surgery is obvious to others and she ends up being singled out and scorned in a different way. When I went to college, I was suddenly in a more diverse environment that included other Asian Americans and “real Asians,” and the way I looked wasn’t as notable to the people around me. But the social survival techniques I’d used over the years, which included suppressing any instinct to identify as Asian, had led me to suppress all sense of identity. Once I was no longer just surviving, it became apparent to me that I didn’t have any self left to offer the world around me. I still felt like everyone was dismissive of me, only now it made more sense that they would be because I felt utterly empty inside.

I’ve read a few complaints that both leads in Gangnam Beauty are inexpressive. And yes, Mi-rae and Kyung-seok walking around looking pretty and inscrutable does get old sometimes, but their behavior seems highly realistic to me. Mi-rae is so unsure of herself that she’s afraid to show natural emotion, and Kyung-seok—a moody mess of a man—is hampered by his own past. He lives with his father (Park Sung-geun), a self-centered politician, and is estranged from his mother (Park Joo-mi), the successful CEO of a cosmetics company who Mi-rae—an aspiring perfumer—idolizes.

While Kyung-seok’s bad behavior and icy treatment of Mi-rae may have been glossed over in a different kind of show, Gangnam Beauty takes the opportunity to address it, and to allow him to grow into a warmer and more caring person. At one point, Kyung-seok’s mom chews him out for fighting; it’s clear that this scene isn’t simply for comedic effect and that CEO Na Hye-sung, who has her own storyline involving her struggle to form relationships with Kyung-seok and his younger sister after leaving them with her abusive husband years earlier, is a character to be taken seriously. To an extent, Kyung-seok’s experiences mirror Mi-rae’s, as both have had childhoods that have substantially compromised their ability to connect with others. 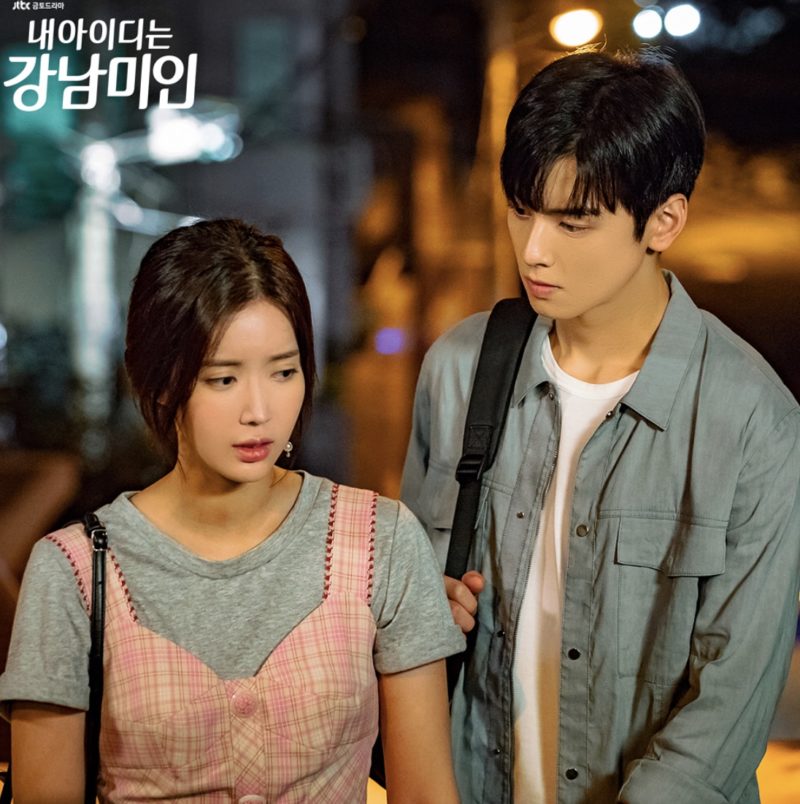 However, despite its romance formula, Gangnam Beauty is really about Mi-rae’s journey towards self-acceptance. It’s also a celebration of many different kinds of love—friendship, familial bonds, self-love, community—and of beauty. Mi-rae’s passion for perfume is a reminder that beauty isn’t fixed or strictly physical but a flexible, amorphous thing. Even in flashbacks where Mi-rae is being taunted by neighborhood boys, we can hear the hum of insects in the background, feel the warm embrace of nature and the intense glow of childhood lingering just off-screen. The show uses clever, intentional filmmaking that makes what we don’t see just as important as what we do, blending deep emotion with a soft and appealing surface aesthetic in the process.

Mi-rae not only grapples with her lingering insecurities but learns to take responsibility for her own part in maintaining them. Being criticized for her looks has caused her to attach undue importance to the physical appearance of others, and she has to confront this shallowness in herself in order to heal. I struggled to connect honestly with people in college (and for many years after) because I had hardened myself against the feeling of being judged by judging others just as harshly. I expected too much from people, gave up on them quickly, and was cynical towards notions of culture and community. Unlike Mi-rae and Kyung-seok, though, I didn’t become aware of my destructive tendencies for a long time. But while Mi-rae’s college experience eventually becomes more fulfilling and meaningful than mine ever was, I don’t feel bitter watching it. Instead, I feel that her story can exist in conversation with my younger self, that it allows me to feel emotions I was numb to at that age.

Though My ID Is Gangnam Beauty is a product of the very cultural elements it critiques—a pretty, consumer-friendly package centered around privileged young people—it raises serious questions on the subject of second chances: Do we deserve to remake our lives? Is it reasonable to hope for newfound happiness later in life? These questions are relevant to Mi-rae at her tender age but also to forty-something Na Hye-sung, who despite her success carries the scars of her ex-husband’s cruelty, and they are handled with care and generosity.

Finding this hopeful story about forgiveness and acceptance within a culture I didn’t grow up feeling I had any claim to, a culture I deeply regret having once thrown out of my life as if it were garbage, and finding it within an admittedly sometimes very corny piece of entertainment within a medium—Korean dramas—that’s still often dismissed as being trashy and worthless has been a weird and humbling experience I don’t quite have the words to describe. The best I can do is to say that it’s opened up a kind of window in my mind. Not a window I can look through, even metaphorically, but one from which I can feel possibilities stirring, just out of view.

Meet Andy Le: Death Dealer in ‘Shang-Chi and the Legend of the Ten Rings’