Now before I get into my review of the most recent Yu-Gi-Oh! movie, Yu-Gi-Oh! The Dark Side of Dimensions, please know that the title is not an attack nor used in a derogatory sense – the movie was quite literally filled with homosexual innuendos that couldn’t be mistaken as anything other than gay unless you’re an extremely repressed religious individual who has been living under a rock. So, without further ado, let’s get right into it. 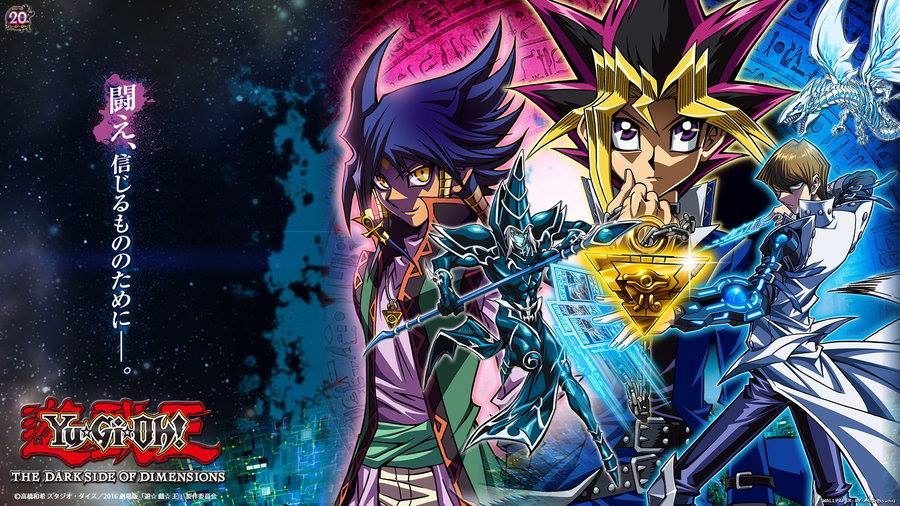 The main duelists of ‘Yu-Gi-Oh! The Dark Side of Dimensions’

If you’ve been following my posts (let’s be real you probably haven’t), you’ll know that I recently wrote an article on how Yu-Gi-Oh! has changed in the past decade and not necessarily for the better. Well, that didn’t stop me from buying new cards and dueling my heart out. So when I heard that this movie was coming out, I was ecstatic! I waited until the day the movie came out and went straight to the theater. To be honest, it was a subpar movie but people who watch Yu-Gi-Oh! Abridged and are actual fans of the show/game, should definitely watch it because the overly done character tropes and horrible jokes make it 10/10 hilarious.

For those of you who aren’t in the know, it’s about Kaiba trying to duel Atem (the Pharaoh, aka Yugi’s other better darker half) by piecing the Millennium Puzzle back together, and Shadi’s religious cult comprised of only children from throughout the millennia trying to stop him. Long story short, it’s basically about Kaiba. Exactly what everyone wanted.

If you’re still wondering whether or not you want to watch the movie, let me further break it down for you.

This movie would be great for (1) people who used to write yaoi fanfic of Yu-Gi-Oh!. That shit had so many homoerotic moments I thought I was watching a softcore yaoi film adaptation of a doujinshi.  (2) People who watch Yu-Gi-Oh! Abridged. The jokes in there are too relevant to the youtube series and I hope to the gods they make an abridged version of it. It really seemed like the voice actors had so much fun with it and over did their characters cause why the eff not (3) people who play the game cause you get a free Obelisk the Tormentor card.

Yu-Gi-Oh! The Dark Side of Dimensions will be playing in select theaters until the 9th, so I strongly recommend you get out there and watch this movie.

Recognizing the Morally Ambiguous Women of...