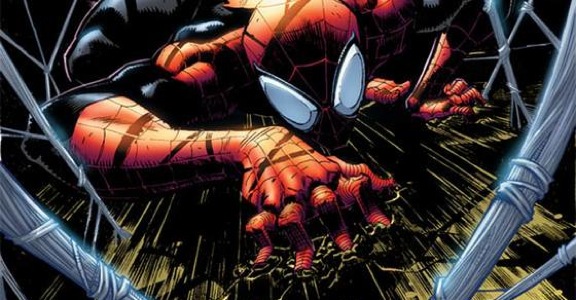 The long-anticipated return of the one true Peter Parker has finally occurred! Following the 32 issues of Superior Spider-man, today marks the release of The Amazing Spider-man #1 (comic, not movie)!

For those of you that couldn’t bother to read the series, here is a general summary that focuses more on the highlights:

It all started in Amazing Spider-man #698 when Peter Parker awakes to find himself in the body of his dying semi-arch-nemesis, Dr. Otto Octavius, AKA Doctor Octopus! As it turns out, Doc

Ock had his mind and memories uploaded into a golden octobot that – during Spider-man’s last encounter with the Goblins – was able upload into Spider-man, himself!

Now rotting in jail and a dying body, Peter Parker finds himself backed against a wall and orchestrates a daring escape with the help of a few super-villains. In a final confrontation with the new Spider-man, Peter Parker seemed unable to subdue the imposter. All seemed lost but at the last minute, Peter

revealed a golden octobot of his own to reverse their bodies again! Unfortunately, Doc Ock lined his mask with a carbonadium plating that protected his “spidey” head from the exchange. In his last few moments of life, Peter used his link with his old body to force Otto to “re-live”

all of Peter’s memories in a flash and in that moment Otto realized why Peter does everything he does – why Spider-man has a responsibility to be a hero. As Peter slowly faded away, he asked Otto to promise to look after Aunt May and Mary Jane. Otto made that promise and added that not only would he look after them, he would renounce his villainy and become the world’s greatest Spider-man – a Superior Spider-man.

During Doc Ock’s reign as Spider-man, most people noticed a drastic change in his character. He was darker, ruder, and willing to beat small-time crooks to within an inch of their lives. On one occasion, he even executes the mass-murderer Massacre with a gun at point-blank! Usually, a small voice in the back of Otto’s mind stops him from killing anyone and this voice will even forcibly stay his hand. This little voice, as it turns out, is the consciousness of Peter Parker which exists because of the memories of Peter Parker that still exists in their shared mindscape. Otto uses a brainscanner to wipe out all of Peter Parker’s memories (except for the 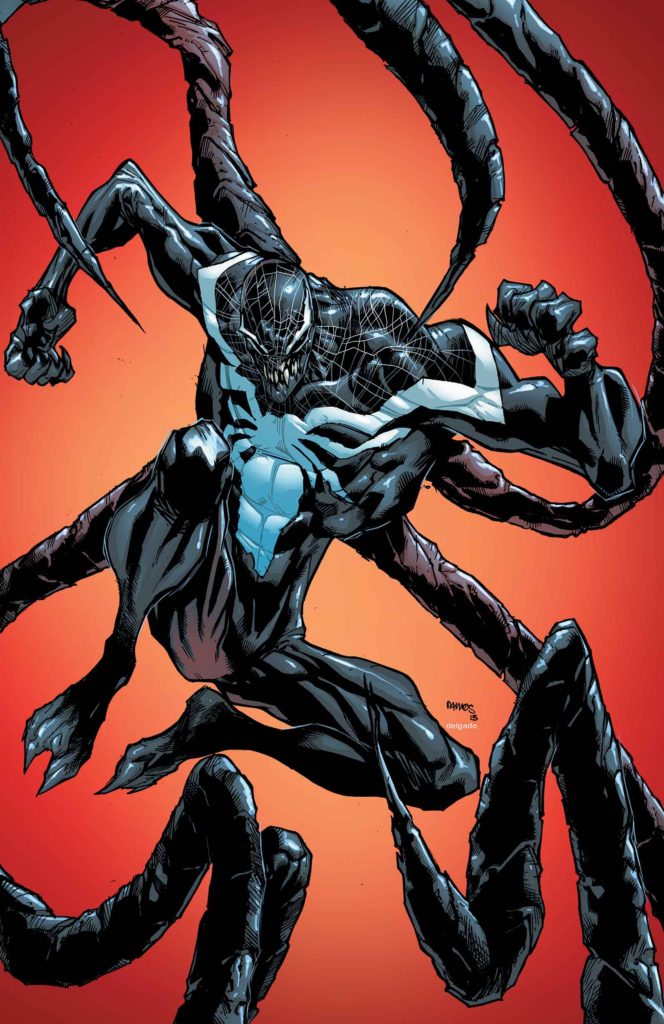 memories that he had already accessed), and Peter Parker’s consciousness with it.  After this darker Spider-man runs rampant for a time under the influence of the Venom suit, the Avengers grow nervous of Spider-man’s new methods and bring Spider-man in for tests but fail to catch the mind-swap. Iron Man, who was not present during the tests, requests to analyze the results of the test himself but finds out the results have been erased by Spider-man. When confronted later on, Spider-man refuses to submit to more tests and quits the Avengers to escape from them.

Otto begins to find ways to be a more efficient Spider-man by developing Spiderbots that patrol the city and alert him to crimes around the city, which allows him to return to school for his doctorate. There, he meets a fellow student, a little-person named Anna Maria, with whom he builds a budding relationship with. Unbeknownst to him, Norman Osborn, AKA the Green Goblin, has been gaining influence throughout the gang world and has been silently building an army that is led by his growing “Goblin Family” that begins with 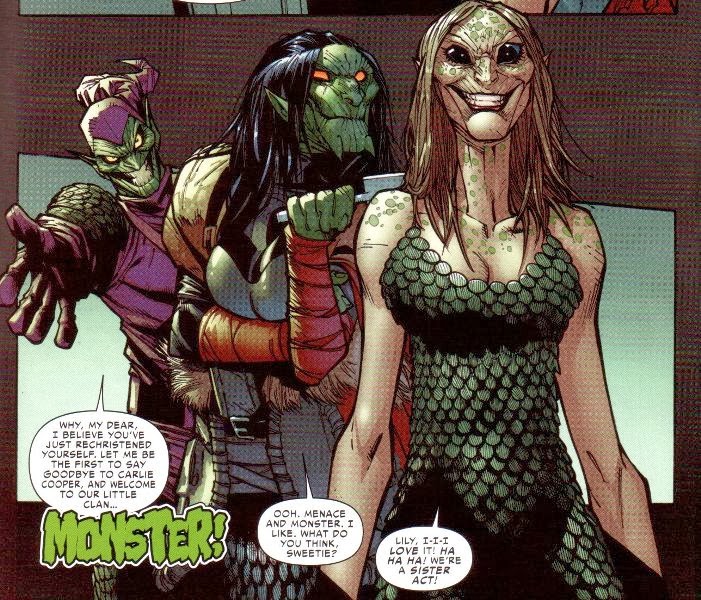 just Menace, but is later joined by Phil Urich as Goblin Knight and Monster. The Green Goblin, who now calls himself the Goblin King, hacks into the spider-bots and have them unable to recognize anyone with a goblin face, allowing his army to grow right under Spider-man’s nose. 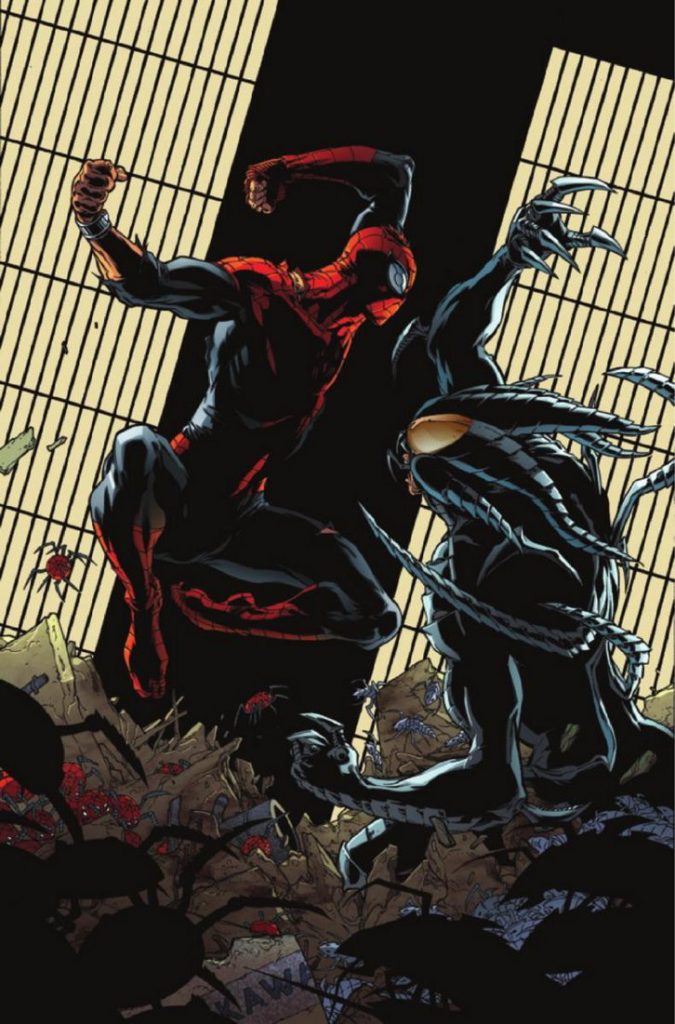 ce operated as the super-prison, The Raft, and effectively ended the relationship he and Jameson had. With this new base of operations, dubbed Spider Island (2.0), Spider-man began hiring “Spiderlings” as henchmen in his new base. With his army of Spiderlings and his Spider Mechs, Spider-man led a charge against Kingpin’s Shadowland and razed the fortress to the ground. 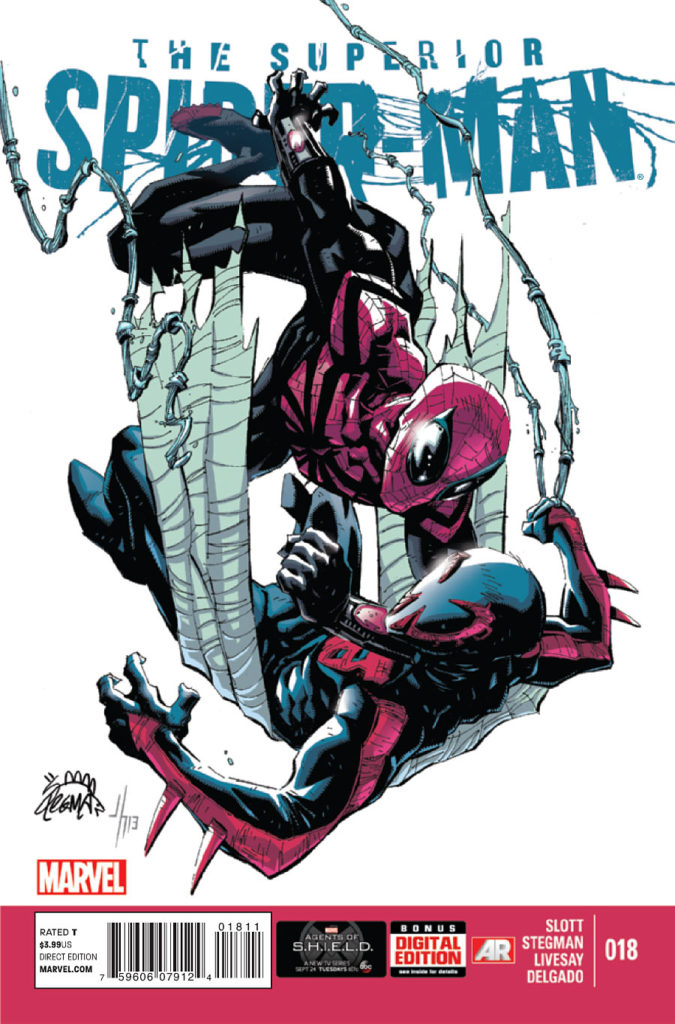 At one point, Carlie Cooper, Peter Parker’s cop ex-girlfriend and personal friend, discovers that Spider-man’s body had been taken over by Doc Ock. Before she can reveal this truth to anyone, she is kidnapped by Menace and brought before the Goblin King. Carlie is injected by the Goblin serum and reveals that it is really Doc Ock behind Spider-man’s mask. Though Carlie Cooper knows that Peter Parker is Spider-man, she doesn’t share that with the Goblin King.

The Goblin King challenges the original Hobgoblin, Roderick Kingsley to a “Goblin War”. Kingsley had been running his own criminal empire, renting out villains’ names and powers to would-be-villains in exchange for money. This included Phil Urich as 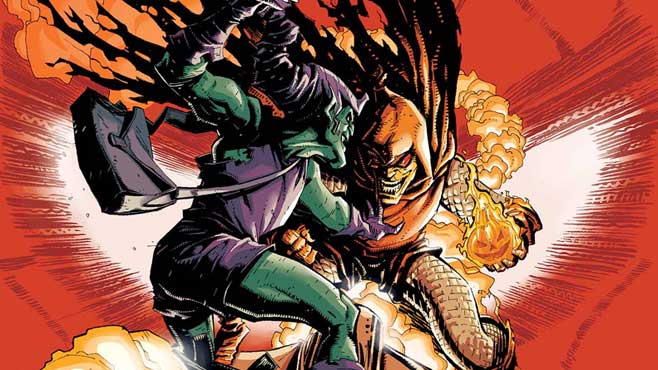 31 days later, Doc Ock discovers the growing Goblin Nation under the Goblin King’s rule and how the spiderbots had been 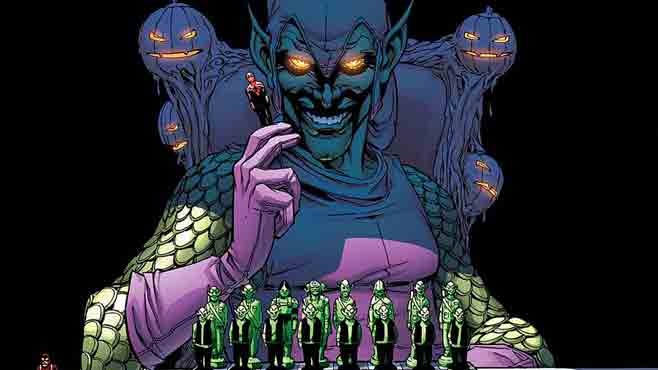 compromised. Peter Parker’s consciousness had reemerged during Doc Ock’s encounter with the Venom suit, but had kept a low profile so that Doc Ock doesn’t relearn of his existence. Peter realizes that he still exists because Doc Ock had accessed some of Peter’s memories. Doc Ock’s memories of those memories still existed, therefore the memories themselves exist as well (read that sentence a couple more times and it will make sense). Peter becomes curious and delves into the memories of Doc Ock, but accidentally becomes stuck and forced to relive Otto’s entire life through his eyes, becoming more and more like Doc Ock by the second. By the time he was reliving the body-switching, Peter’s mind had become completely in sync with Doc Ock’s villainous mind. Then Peter 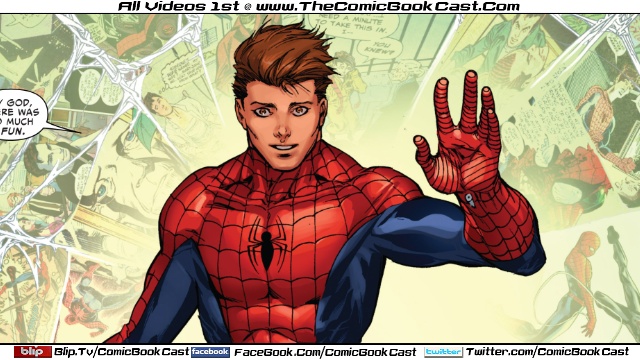 relives the point where Otto is forced to relive Peter’s life and thus relives his own life (confusing again, but keep rereading the sentence until it makes sense). Peter’s consciousness was completely revitalized by his original life-memories and came back stronger than ever.

Doc Ock, in the meantime, was having troubles of his own. After discovering Norman Osborn’s goal of Goblin Nation, the Goblin King destroyed Spider Island and kidnapped Anna Maria who had become the love of Doc Ock’s life. After the destruction of Spider Island, Otto was able to capture Monster and hand her over to a coworker of Peter Parker’s to find a cure. Weak and failing at every turn, Doc Ock eventually meets the revitalized Peter Parker consciousness. Desperate to save Anna Maria, Doc Ock admits that he is not the Superior Spider-man he thought he was and again dons the brainscanner. Doctor Otto Octavius then makes the greatest sacrifice and erases his own memories and consciousness so that Peter can again gain control. In his last moments of existence, 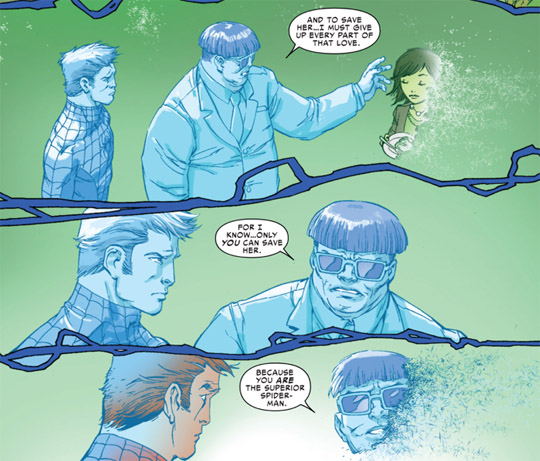 Otto Octavius tells Peter that only he can save Anna Maria and must be totally focused without any distractions or confusions. Once again in control of his own body, Peter Parker rose as Spider-man unencumbered by the memories of Otto Octavius whether they be villainous or heroic. Peter grabs his old suit and the newly developed Goblin cure and rushes out to save Anna Maria. 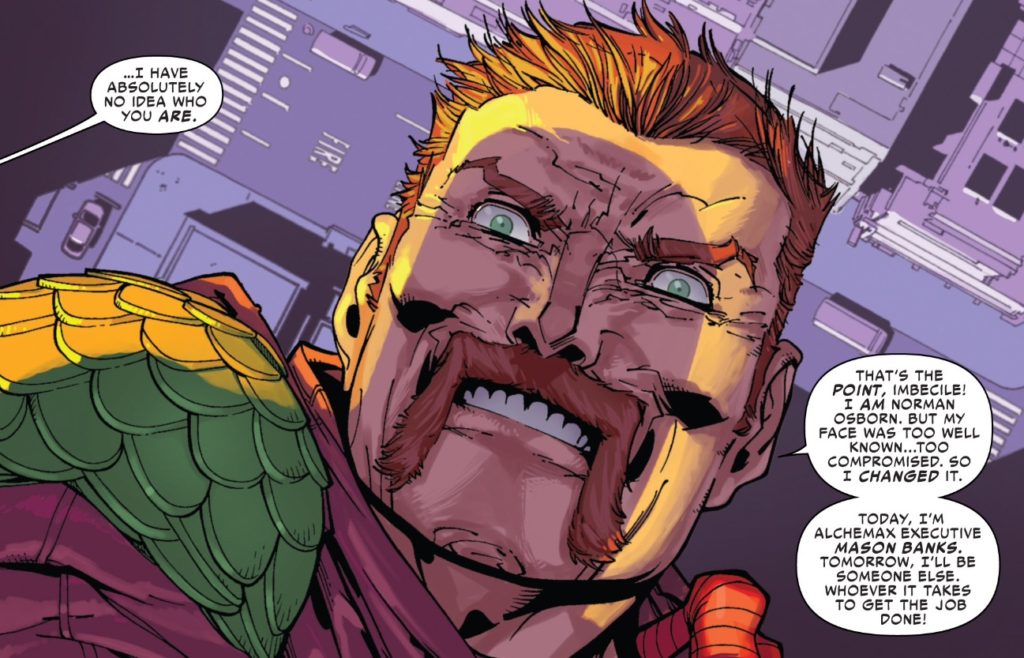 that Norman Osborn had his face altered and has been running Alchemax alongside Liz Allen. Liz Allen orchestrates Norman Osborn’s escape and tries to make it seem like an accident. Although Osborn gets away in the end, he no longer has super-powers thanks to the Goblin Cure.

Sorry for the long “Summary”, but believe it or not I actually left quite a bit out. I instead focused on the highlights of the series. Although I cried myself to sleep every night for the next 2 months after the seeming “end” of Peter Parker, I can’t deny that the Superior Spider-man series was amazing. At first, everything Otto did seemed like improvements on Spider-man’s methods. Instead of plain goggles, he had a heads-up-display (HUD) much like Iron Man. Instead of a plain costume, he had extendable spider legs from his back much like the Iron Spider suit given to him by Iron Man. Instead of swinging blindly throughout the city hoping to randomly bump into crime, his spider-bots alerted him to crime.

All this technology allowed him to be more attentive his personal life, but created a dependency that ended up biting him in the asm at the end. His spiderbots were seen as a Big Brother breathing down the backs of every resident of New York, yet still allowed an entire Goblin Nation to form right under his nose. His spider legs were also programmed to kill Spider-man himself (forcing a friend to sacrifice his life to save Spider-man’s).

This series just reminds us of the things that make us love Spider-man. It walks us and Otto through a crash-course on why great power comes with great responsibility. It shows how love turns even the worst of us into heroes. It shows that Peter Parker is Spider-man; that Spider-man is Peter Parker. One without the other, doesn’t work.

The opening of Spider-Man: Into the Spider-Verse recreated by fans